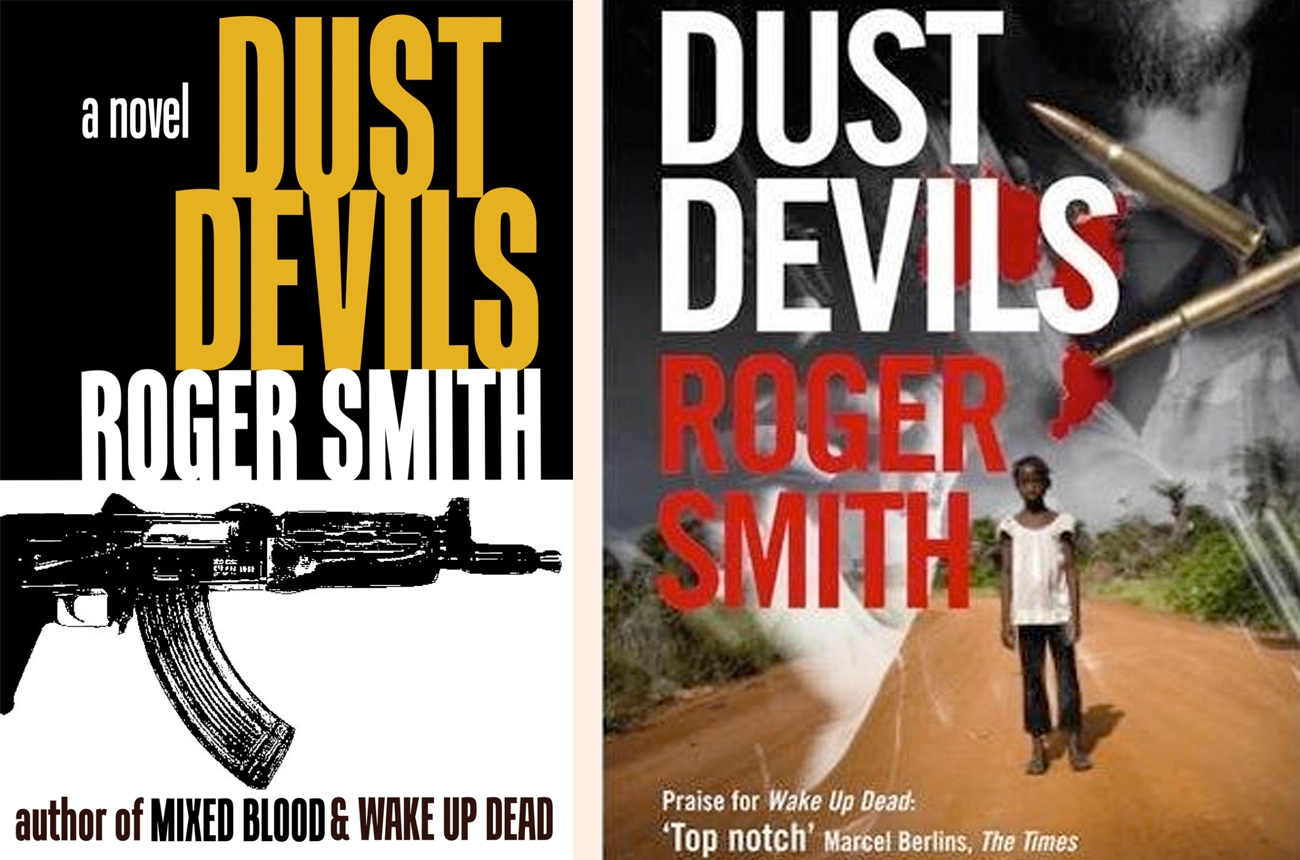 In literary-critical debate, it won’t do to make emphatic statements about uncovering political corruption. In the case of crime fiction, the hot new SA genre in which Roger Smith is writing, hot debates start running the moment anyone takes a stand for the new trend of crime writing – or against it. By LEON DE KOCK.

Roger Smith’s third SA crime thriller, Dust Devils, is similar to his previous two, Wake Up Dead and Mixed Blood, in one important respect: there are no “good guys” left, anywhere.

There are almost good guys, but they are “good” only in a sense that is relative to the degrees of venality elsewhere. Everyone is rotten. The system is rotten. No one who works inside the system can escape it. And there’s no action outside the system. So the “good” guys are the slightly less-crazies who eventually take out the ultra-rotten cops, the township gang-thugs and the law-unto-themselves types in a blaze of self-destruction.

No one survives intact. Smith’s social analysis – if one dare call it that – is that nothing and no one in South Africa is “clean” anymore.

Smith makes that hell almost funny. Almost. The style is noir, and it’s well done. The hand of a slick, skilled scriptwriter is only too evident.

And then the corruption stories ring so true, especially after reading the cultural and psychic anatomy of corruption delivered by Njabulo Ndebele in yesterday’s City Press.

In literary-critical debate, however, it won’t do to make emphatic statements about uncovering political corruption. In the case of crime fiction, the hot new SA genre in which Smith is writing, hot debates start running the moment anyone takes a stand for the new trend of crime writing – or against it. Witness the comments on www.slipnet.co.za ever since Lynda Gilfillan dared to challenge the academic “genre snobs” who pinch their noses every time they encounter a new South African thriller.

The point is, it’s not only the “genre snobs” who do this. The critics appointed to adjudge each year’s best published work for the country’s major prizes also still mainly pinch their noses when they encounter crime fiction.

But there is one problematic exception which might just change the game – Sifiso Mzobe’s Young Blood, which won the 2011 Sunday Times Prize, although it failed to make the shortlists of other major prizes.

The fact that Young Blood is classified as “crime fiction” at all – as it often is – strikes me as problematic, because this novel is so much else, too. Yes, it’s about crime, but it’s also a coming-of-age novel, giving it that venerable world-literature categorisation of the Bildungsroman, or even better, the anti-Bildungsroman. And it’s implicitly a “political” novel, too, which until perhaps about the year 2000 or thereabouts, was the acme of “SA Lit” as a preferred highbrow form.

There’s another big difference between Mzobe and, say, Mike Nicol: Mzobe writes from the point of view of the township, and he does not make large assumptions about state corruption in his book’s events and his characters’ motives. That is, what I would call the isomorphism in his fiction is a relation of event and social milieu. What happens to characters in and of the townships are crystallisations of township conditions. Read Nicol (and Smith, in Dust Devils) on the other hand, and the isomorphism is a relation between event and state corruption, usually ministerial, the tentacles spreading downwards like so many evil fingers, crystallising in wonderfully wicked characters like Sheemina February (Nicol) and Inja Mazibuko (Smith).

But if you look even closer, and continue to refine your critical discriminations, then it becomes clear there are major differences between the various crime/thriller writers who now enjoy prominence; between Deon Meyer’s offbeat character-in-motion studies and Margie Orford’s in-your-face fictional expositions of particular themes; between Michiel Heyns’s delicate, literary whodunit style in Lost Ground and Roger Smith’s sharply cut screenplay mode of presentation, or Kerneels Breytenbach’s Henry Fielding-like narrative asides in Piekniek by Hangklip; there are differences in voice, form and effect, not to mention readership “segments” or reception dynamics, if you prefer.

In short, my sense is that we need to do a lot more unscrambling of the “krimi” category, which has perhaps now outlived its purpose.

Cut to Gilfillan’s suggestion (citing the perception of “many critics”) that crime fiction may have become what Gilfillan delicately brackets as “the new ‘political novel’”. Is this a hyperbolic claim?

What Gilfillan is suggesting is similar to an argument I made in the Mail & Guardian in 2011 about Nicol’s silkily smooth thriller, Black Heart: that the dividing line between “crime fiction” and “serious” so-called SA Lit is becoming increasingly blurry. So-called crime fiction, using “genre” elements (hardboiled noir style, thriller pace, stereotypical or sensational presentation of character and scene, the fascination of hyper-evil, horror, and explicit violence) has perhaps become the only readable form of “political” fiction.

Yes, it is “genre”, but it’s also more. It’s the “more” that we should perhaps be interested in, and how that margin of “more” is performing some of what one might call the “uses” of literature in reading bewilderingly changed political out-theres. Some of those “uses”, many of us will recall, are to instruct and to delight (hey ho, Sir Philip Sidney!) We’ve got the delight part working pretty well here, but what about the brief to “instruct”? I would argue that literature, in any form, is engaged in shaping the sense-making capacities of particular cultures and people at particular times. And that, seriously, is what it’s about.

If we forget for the moment the aesthetic or even the “artistic” shortcomings of crime fiction (or genre fiction for that matter), and concentrate on how the contortions of “genre” are creating a very particular fictional imaginary, a kind of isomorphism of the perceived but ungraspable political “real”, then surely we are back in business as critics of South African writing when we talk “crime fiction”?

I fear that this debate will lapse too quickly into a faction fight between “aesthetes” and “utilitarians”, or “aesthetes” and “democrats”, as Michael Titlestad once described such a redundant polarity in his review article on the brouhaha unleashed by the poetry anthology The Heart in Exile in the 1990s. Otherwise put, a contest between adherents of highbrow literature and those of “popular” writing.

As far as “political fiction” goes, “crime thrillers” are about the most operative and readable kinds we have going right now. I won’t mention any names here, but one could cite a few examples of political novels written by heavyweight writers in the “old” style, in recent years, which have proved mesmerisingly unreadable.

Something had to give in the older style – the documentary manner, the serious overlay, the earnest, almost sanctimonious posturing, the high ground, the mythologisation of struggle-hero types, the relentlessly tedious social realism (give us some “genre”!), and the utterly predictable outcomes, despite layerings of ambiguity and Fanonesque warnings about neo-colonial corruption.

The means to power, here – similar to Jacob Zuma’s perceived and reported means to power – involve corruption and cronyism. Like the corrupt, murdering Nat functionaries under PW Botha, FW de Klerk and their predecessors, the hitmen working for the ANC-bigwig in this novel stop at nothing: they kill, they manipulate the judicial process, they rule by terror and by favour. They are a law unto themselves. As former pacifist (and conscientious objector in the older days of white conscription) Robert Dell discovers, the only way to fight violent evil is by violently evil means. You don’t approach hitmen with court orders or warrants.

Reading Roger Smith raises difficult questions: how much of it is “genre” and how much is socio-politically isomorphic? We read endlessly in the media – a media now being threatened with an arguably unconstitutional secrecy bill – that government politicians at all levels are knee-deep in nepotism; that they are engaged in corrupt, self-serving malpractice. The former commissioner of police has been convicted in the highest courts of law for corruption. The current commissioner of police has been suspended on allegations of corruption. Ironically, these two facts simultaneously affirm and contradict the isomorphic adequation of Smith’s fictional world. Yes, it’s very bad in the real world out there. There can be little doubting it. But no, it can’t be quite as bad as Smith makes out, because somehow two commissioners of police have been caught with their pants down, and they’re paying the price. That couldn’t happen in the hyper-evil South Africa that Smith (and perhaps Nicol, too) present to us.

Does this mean that, in the final analysis, “genre” rules, or at least that it overpowers responsibly complex historical adequation? Does it mean that this kind of crime fiction has some way to go before it can be called “political”? Should “genre”, and the SA crime thriller in particular, be appropriated to the “political novel”? What “entertainment” or perhaps “cathartic” function is fulfilled by the deliberately overdone crime thriller (the symbolic restoration of order)? As Margie Orford says, at least in fiction you can exact some kind of justice. There is satisfaction to be had in that, a kind of satisfaction often denied in reality. Must fiction serve the ends of what Fredric Jameson famously called the “political unconscious”, where history is, must be, the “ultimate horizon” of literary and cultural analysis?

If novels like Dust Devils, or Nicol’s Killer Country, get it “wrong” in some critics’ view, exaggerating political criminality for the sake of the genre, they also get it “right” by compelling such critics to make their claims about what is in fact accurate and what’s not. As the ultra-cool SA cultural anthropologists, Jean and John Comaroff (also working on SA “crime” and its representations) suggest, it’s all about mediation, both the fiction and the criticism. And that, ultimately, is why it’s all to the good, because mediation is the space of a critical democracy, the best antidote to any kind of closure, any kind of totalitarianism whatsoever, whether by politicians or by critics, or by writers, for that matter, too. DM