Ring of Fire: Not so crazy a picture

Ring of Fire: Not so crazy a picture 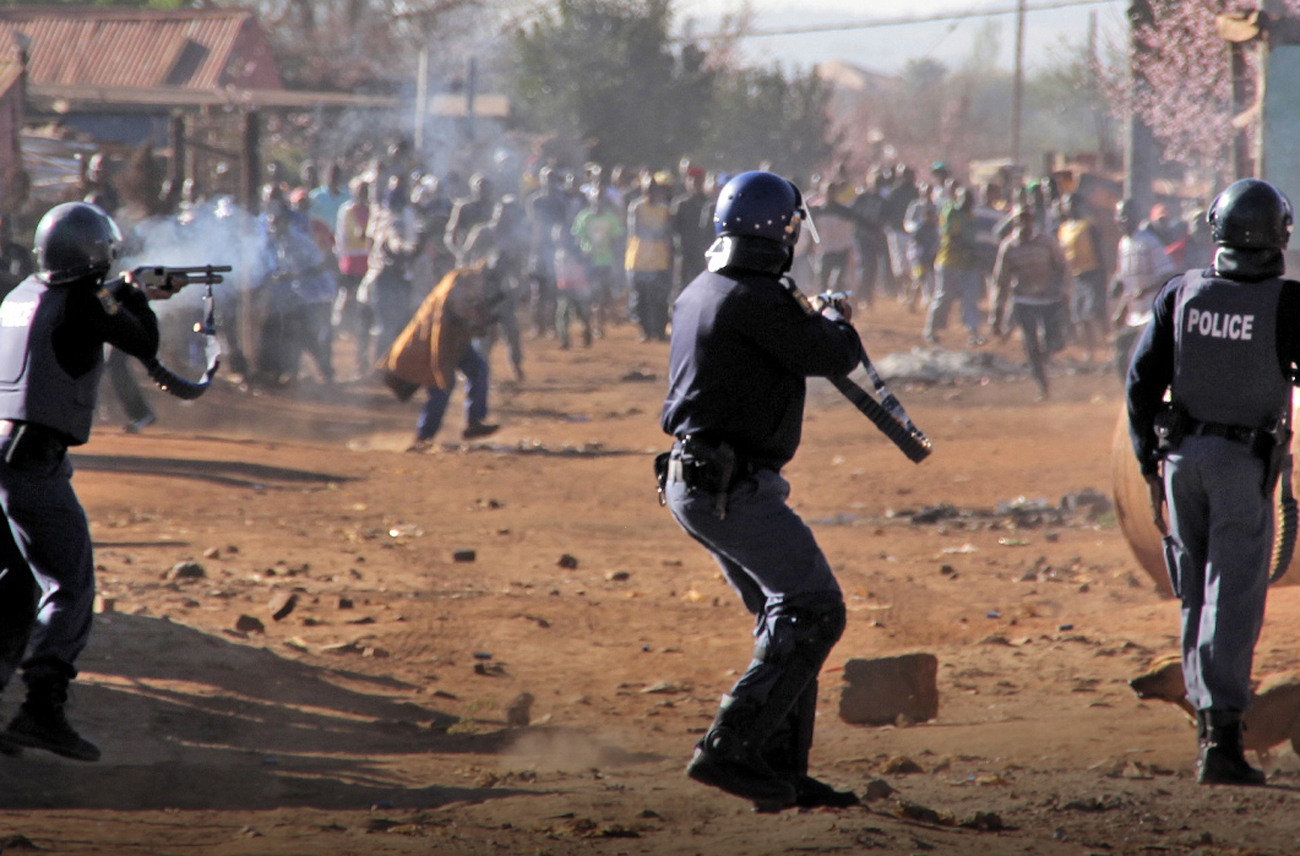 In 2011 iMaverick brought you strong coverage of South Africa’s delivery protests. As we prepare to get more pictures and stories from the frontline, we pause for a moment to ask, “What if?” By GREG NICOLSON.

The police minister has advised residents to stay indoors after coordinated service delivery protests erupted across the country on Sunday. Police struggled to control the unrest as access to most cities and townships was blocked with rocks and burning tires. Work came to a standstill as companies and schools locked their doors while demonstrators pelted vastly outnumbered police with stones and petrol bombs. The minister said it was impossible to measure the toll of the unrest while protests continue.

Demonstrators threatened to storm the homes of Cabinet members and dozens of councillors’ houses are said to have been set alight. “It’s like a warzone,” said the minister, “skirmishes are on every corner”. He told residents not to open their doors under any circumstance because crowds are engaging in criminal activities. iMaverick witnessed looters dodging rubber bullets as they raided homes near Alexandra.

This, of course, is still fiction. But as we embark on what’s likely to be yet another year of protest, the scenario is not so far fetched. Since 2005, there has been on average more than 8,000 “gatherings act” incidents per year, according to the SAPS. Their varied nature results in different interpretations, but modest estimates from the SAPS recorded 971 “unrest-related” incidents in the year to March 2011. By November 2011, Municipal IQ had recorded 81 “major” municipal service delivery protests (counting sustained action as a single event). What would happen if all of these incidents occurred on one day, if in 2012 the rebellion of the poor reaches a crescendo?

Cosatu general secretary Zwelinzima Vavi has been warning of a “ring of fire” for a while now. It’s easy to lampoon his doomsday predictions as the workings of a paranoid soothsayer studying the Mayan calendar in a dark office at Cosatu House, but he could easily have a point. He argues that the increasingly violent public protests around Johannesburg are the start of a youth uprising à la the Arab Spring. “Thousands of South Africans feel marginalised and ignored, living in slum shacks, collecting water from taps in the street, even having to use bucket toilets,” Vavi said in June 2011. “This has led to a growing number of service delivery protests, to demand houses, running water, tarred roads, schools, clinics and all the other basic necessities for civilised life.”

Vavi is particularly concerned about the consequences of unemployment, officially at 25%, not including the underemployed and those who have given up looking for work. He wants bold intervention to address the lack of jobs, for the economy to be restructured and for the government to improve transparency. Without the right strategy, “very soon, we will find ourselves in the same situation as Tunisia, Egypt and Yemen”.

In Business Day Moeletsi Mbeki went as far as to divine the arrival of our “Tunisia Day” – “when the masses rise against the powers that be”. According to the political analyst, in 2020 China will complete its minerals-intensive industrialisation phase and the stream of revenue the ANC government uses to finance social grants will dry up. “The ANC inherited a flawed, complex society it barely understood; its tinkerings with it are turning it into an explosive cocktail. The ANC leaders are like a group of children playing with a hand grenade. One day one of them will figure out how to pull out the pin and everyone will be killed.”

Mbeki touches on the undercurrents of unrest, particularly the failure to improve material conditions for all since 1994. Since the election of the ANC, life expectancy has fallen from 65 to 53 years. For the first time in the country’s history, South Africa became a net importer of food in 2007. About 600,000 farm workers have lost their jobs and 2.4-million commercial farmers left the industry between 1997 and 2007 while concurrently farm subsidies were eliminated. And finally, a flood of foreigners has entered the country leading to tension between the local poor and migrants.

But the causes of a service delivery protest are often local and are so divergent it’s difficult to lump them in together. In a 2010 study, Peter Alexander from the University of Johannesburg tried to define “service delivery protest”. “It appears that what we are attempting to grapple with is locally-organised protests that place demands on people who hold or benefit from political power.” But a list of the varied forms protests take makes any overarching label look like a method of simplifying frequent riots.

Once we remove the local players from the narrative, however, there are a number of themes that, with a little imagination, could be channelled towards a mass demonstration. Alexander notes that the most common causes of protest are a lack of housing and basic services and the abuse of local administration. Since President Zuma’s inauguration in May 2009, there has been a spike in action, ironically due to his increased legitimacy and higher expectations of the new government. The protests revolve around youth, unemployment and inequality, and often ask fundamental questions about citizenship.

Such factors offer potential for violent protests to be organised across communities. While grievances are often local, the buck stops at the top. If youth want to send a direct message to the president, they have the resources to organise. The power of social networking was on display in the Arab Spring and London riots; will it be tested in South Africa?

If protests erupt, the degree of violence will largely be determined by the police response. Brigadier Schutte from Gauteng’s Crime Combating Unit has called for increased training and equipment to deal with protests, because, with 80% of township youth unemployed, we’ll see revolutionary protests within three years, he says.

But the current police response shows worrying trends. The Independent Complaints Directorate recorded five cases of alleged brutality from public order policing in 2006. In 2009 it recorded 59 cases. The majority of cases were assault with intent to do bodily harm, attempted murder and murder. In 2011 the Centre for the Study of Violence and Reconciliation released eight case studies of community protest. With an eerie echo of apartheid it stated, “the arrival of police from outside the local precinct signalled a shift to violent repertoires usually in response to police violence”.

In September 2011, Phillip de Wet from iMaverick noted five lessons learnt from protests in Themb’elihle. “The unifying factor in Themb’elihle is frustration, and the root cause of that frustration is the sense that nobody is listening; memorandums of grievances go unanswered, politicians only arrive once the tires are burning.” With the channels of communication closed, police become the first response. If they’re heavy handed, things get ugly.

So how can we avoid solving our problems through widespread protest that might cause turmoil and fatalities? “If we want to develop SA instead of shuffling pre-existing wealth, we have to create new entrepreneurs, and we need to support existing entrepreneurs to diversify into new economic sectors,” wrote Mbeki. His proposed shift from supporting black economic empowerment to young upstarts might provide hope to the disenfranchised, but it’s not a cure-all. The problem is that service delivery protests are a confronting reaction to unemployment, poor living standards and bad governance – issues without easy answers.

Violent service delivery protests usually have a distinct local flavour but the big issues all come back to national government. If there’s no perceived improvement it might only be a matter of time until protestors shift their focus, organise and bring the fight to a town near you. Not so impossible indeed. DM