Ha-Joon Chang: Free capitalism is anything but free 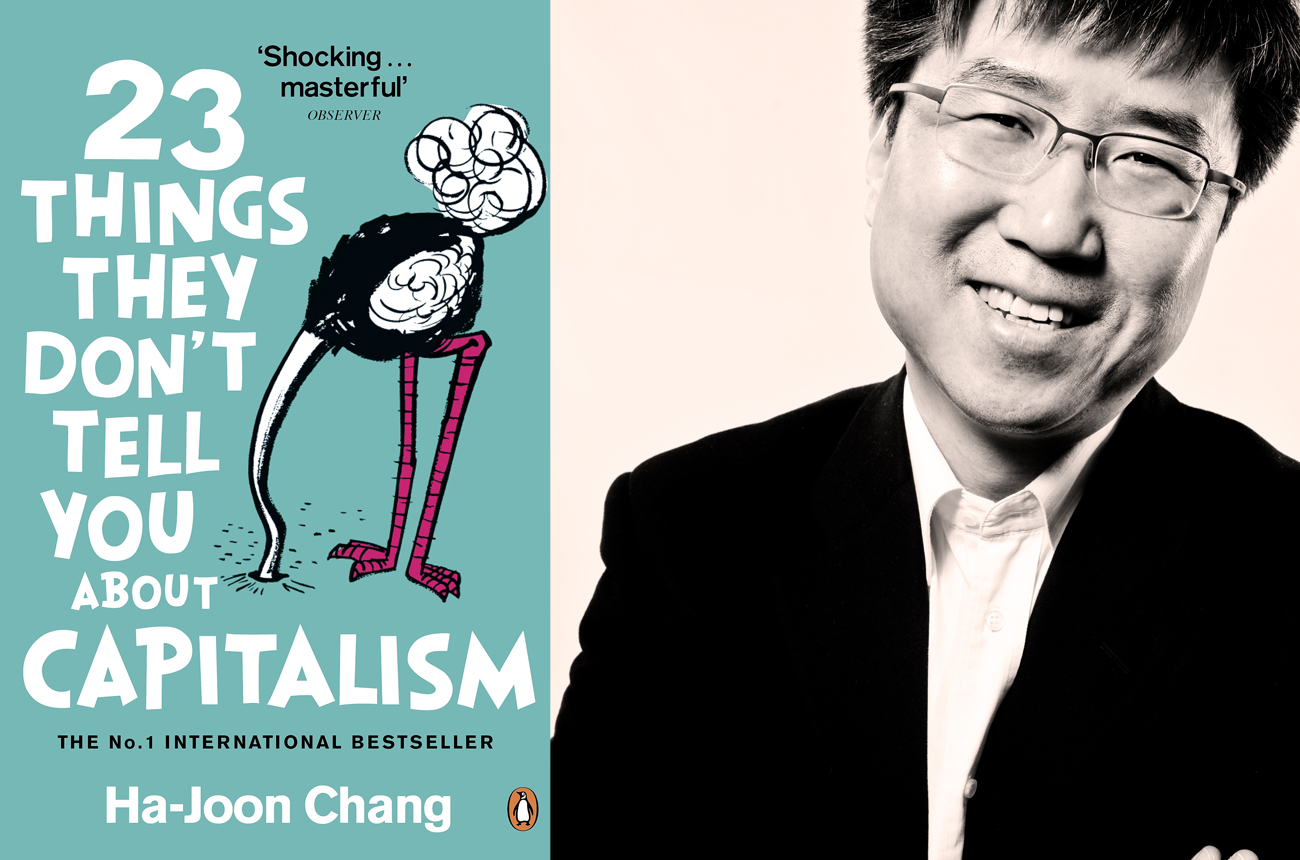 Ever since the death of feudalism, the captains of capitalism have churned the wheels of spin to have us believe that free markets are free, globalisation is good, capitalism is fair and other fairy tales. Cambridge development economist Ha-Joon Chang says it’s high time we stopped drinking the pro-capitalist Kool-Aid. By MANDY DE WAAL.

Markets are not a natural phenomenon but are merely political constructs. Prominent development economist and author of 23 Things They Don’t Tell You About Capitalism, Ha-Joon Chang says once you get your head around that concept, you’ll begin to see that there’s no economic theory that’s totally objective and you’ll understand why you shouldn’t be awed by “economic experts” who present their views as “scientific evidence”.

Chang, who teaches economics at the University of Cambridge, is a dissenting voice in the world of economics who believes there’s no such thing as free markets and that free trade is anything but free, and doesn’t make countries richer.

“The myth that free markets are the ‘natural’ order of things and that therefore any attempts to change their workings – through government intervention, trade unions, consumer boycotts – are interfering with the natural order is critical in maintaining the status quo,” writes Chang in an email interview with iMaverick. “Markets, unlike democracies, are run on the basis of one-dollar-one-vote, so if you say we should not interfere with the free workings of markets, we are implicitly saying that those who have money should be allowed to decide how societies are run. Once we begin to see free markets as what they really are, we become much more willing to challenge the economic status quo.”

Flown into Namibia late last year to counsel cabinet members, deputy cabinet members and the heads of state-owned organisations on the country’s development plan, Chang doesn’t pull any punches when it comes to dispelling capitalist myths or exposing economic hypocrisy. One of his first books Kicking Away the Ladder got its name from his proposition that rich, developed countries used interventionist type policies to accrue massive wealth but then “kicked away this ladder” so that other developing countries couldn’t join the economic elite.

This book was followed by Bad Samaritans: The Myth of Free Trade and the Secret History of Capitalism, which became a surprising hit in Chang’s birth country, Korea. Endorsed by Noam Chomsky and Financial Times’ Martin Wolf (known as the “Jeremiah who has the financial world’s ear”), Bad Samaritans sees Chang give unfettered capitalism and globalisation another swift kick in the gonads. This time with a little help from Monty Python, The Full Monty, Charlie Chaplin, Orson Welles, Tom Cruise and Mother Teresa.

“Bad Samaritans got a lot of attention in my native Korea, because it was put on the list of books banned in the military barracks for their subversiveness,” writes Change. “It was a bestseller even before the ban… but the ban catapulted the book into a literary stratosphere in Korea, as it had the aura of a ban but was freely available in bookshops outside the military. To date, the Korean translation of the book has sold over 400,000 copies – probably double what it would have sold without the ban.”

Watch Ha-Joon Chang talking about 23 Things They Don’t Tell You About Capitalism:

Writing to iMaverick, Chang describes the early stages of capitalism as short-sighted and harsh. “In its early days, child labour was prevalent, despite the fact that, in the long run, it hurts everyone, including the employers who use child labour, because it makes the future labour force un-educated and unhealthy. In those days, many people were against the bankruptcy law, because they believed that businesses fail only because the manager is dishonest or lazy – the possibility that they could fail due to systemic crises was not recognised. This made business failures very costly and therefore fewer businesses than today (in proportional terms) were created. Likewise, unemployment was seen as a result of worker’s laziness or greed (wanting too high wages) and thus was punished with workhouses and the like.”

Over time a lot of reforms were instituted to address these myopic and cruel aspects of capitalism in what has become a lengthy, lengthy list that includes child labour regulation, restrictions on working conditions, environmental regulation, bankruptcy law, financial regulations, central banking and the welfare state. “Of course, for three decades until the outbreak of the current crisis in 2008, many of these changes were weakened, which produced many negative results, including the crisis itself,” explains Chang.

Awarded the Leontief Prize for Advancing the Frontiers of Economic Thought, Chang thinks “free-market capitalism” – which he says is the variety of capitalism that has dominated the world in the last few decades – has served humanity very poorly.

“It has increased inequality in most countries and even increased poverty in some countries. Most importantly, it hasn’t even increased economic growth. When free-market policies were re-introduced in the 1980s, after five decades of regulated capitalism (starting with the post-Depression reforms of the 1930s), their advocates argued that, even if they may increase inequality in the short run, those policies will in the end make everyone better off by accelerating growth. This has not happened,” Chang writes in his response to questions from iMaverick.

“The world economy used to grow at around 3% in per capita terms in the 1960s and the 1970s. In the last three decades of free-market policies, it has grown at only about 1.5%.” Chang believes that much of the western world is drunk on an Anglo-American-style free market “Kool-Aid” because this style of capitalism mostly benefits those with money, thus a lot of effort is put into constructing spin that supports the status quo.

“Economic elites all over the world have the incentive to promote such ideas. So they have supported sustained campaigns to promote free-market ideas and put pro-rich politicians in power. As a result, their ideas were spread and put into policy action around the world, unless there were strong countervailing forces – trade unions, left-leaning parties (although some of them, like the British Labour Party, more or less swallowed the Kool-Aid goo),” writes Chang.

“Once the idea became dominant, it was difficult to counter it. Dissenting voices were deliberately ignored, if not actively choked off, and many people accepted it without questioning, because that is the easiest thing to do. As Professor Dumbledore says in Harry Potter, the choice is usually not between the good and the evil, but what is right and what is easy.”

And as the economic elites promoted free-market spin ordinary people too busy with their everyday lives to devote serious efforts to understand the workings of the economy started drinking the free-market Kool-Aid as well and readily believing capitalist myths. Chang says that when it comes to understanding capitalism, most people rely on what they read and hear in the mass media, which are strongly influenced by the views propagated by those who have financial and political powers – namely the views that justify the status quo.

“The intellectuals who supply these views – some of them in the academia, some of them in think-tanks, and some in the media – find it intellectually easy, politically convenient, and (sometimes) financially advantageous to ‘go with the flow’, rather than ‘rocking the boat’ by asking inconvenient questions. The result is that people get to accept so many myths and unwarranted assumptions about capitalism, even as they occasionally feel that those dominant ‘stories’ do not conform to their everyday experiences, because they hear nothing else.”

The media readily support pro-establishment economists, media puffs are given to free-market economists and high praise is heaped on economists like Alan Greenspan (once referred to in the media as a “maestro”). But in the wake of the financial collapse, the Arab Spring and the Occupy movement, the free market Kool-Aid doesn’t taste as good as it once used to. At a time when ordinary people are getting disenchanted with capitalism and economists like Chang are getting more exposure creating a more balanced view of what capitalism is and what it isn’t and giving rise to much needed economic scepticism.

“I am one of the very few dissenting economists who are lucky enough to have been hired by a major university and I can tell you that I will be taken much less seriously if I worked in some less famous institution.” Thankfully Chang’s well ensconced at Cambridge which has a bold history of championing economists with dissenting voices, like its Emeritus Professor of Economics Robert Rowthorn who’s strongly influenced by Karl Marx and other fierce critics of capitalism.

Now isn’t it high time we stop drinking the Kool-Aid and open our minds to critical thinking from credible voices of dissent on the subject of economics instead of free market defenders who present spin as fact? DM

This article first appeared in iMaverick on 10 January 2012.