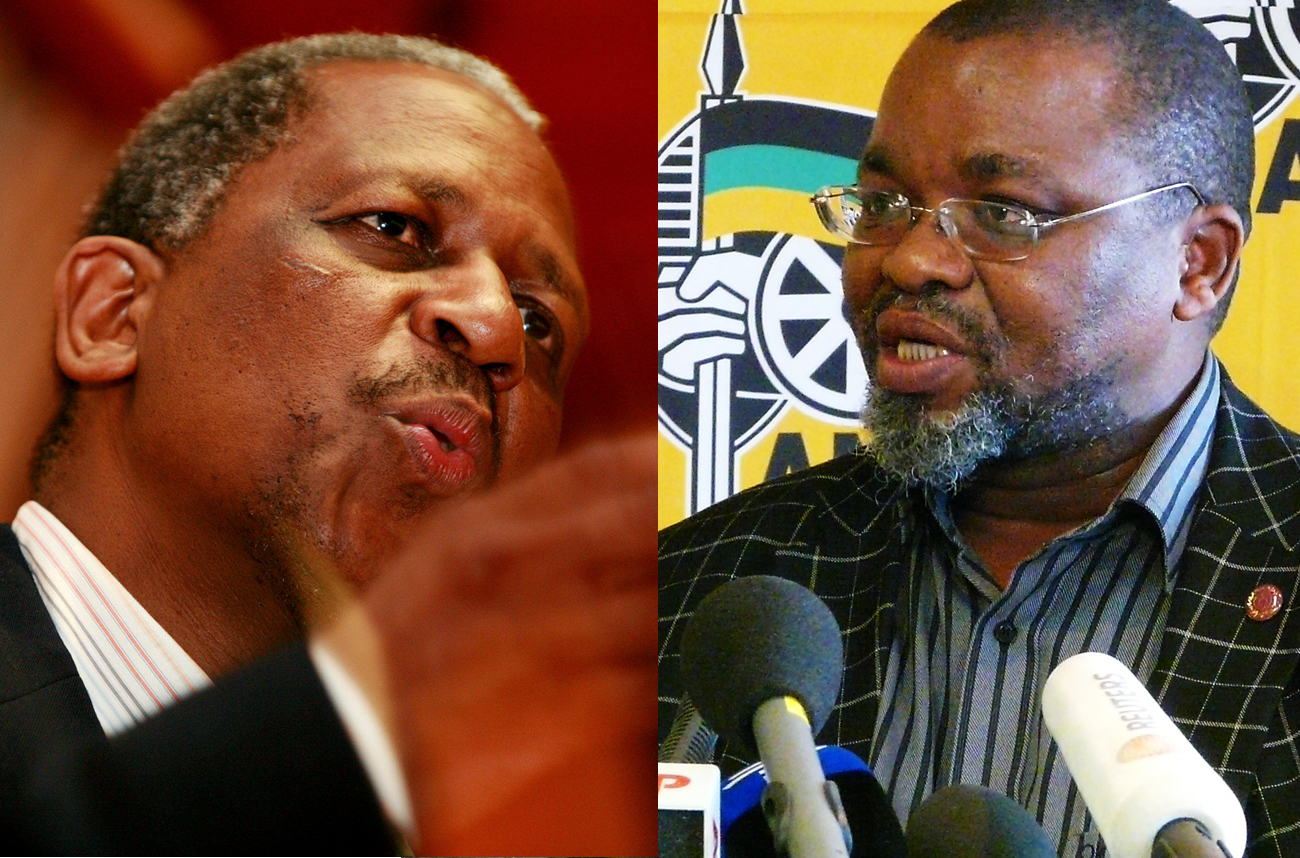 In intra-party politics there are dignified clashes. And there are public clashes. There are very few dignified public clashes. It's one of the reasons why so many parties talk so much about unity. It's also why those in the ascendency of the ANC right now are spending so much time talking about "an end to public spats" and about the need for unity in its centenary year. But to no avail. The fight between ANC treasurer-general Mathews Phosa and the Gwede Mantashe-Jacob Zuma axis is now out in the open. And once it's out there, it's hard to put that blasted genie back in its bottle. By STEPHEN GROOTES.

If Tuesday’s events around the release of that statement by the ANC’s national officials didn’t have us reaching for Wikipedia’s suddenly no longer online dictionary to help us spell “unprecendented”, what happened on Wednesday seemed to sink into the really bizarre. Firstly, when Phosa was contacted for comment by EWN, he said he was not in a position to speak as the statement by the national officials had been amended. You can imagine the incredulity. But, being young and conscientious, we decided to check. And, lo and behold!, he was right. There were now two statements from the “national officials” on the ANC’s website. Full of youthful enthusiasm, we went to read them both. Imagine our shock when we found they were both the same. Huh!??

A closer inspection revealed an interesting difference. On the first statement, the author was labelled as “Jackson Mthembu”. On the second, it was “Gwede Mantashe”. Firstly, Mthembu’s name was probably put there simply because he’s the guy in charge of the ANC’s communication’s machinery. It seems highly unlikely that he actually wrote it; it deals with matters above his pay grade. But if Mantashe wrote it, it makes this fight much more personal. And personal it is. Mantashe confirmed that he did write it.

But he won’t confirm that it’s a criticism. That would be much too simple. He says there was simply a meeting, views were expressed, Phosa was able to express his opinions, and then the meeting agreed on certain outcomes, which were expressed in the statement.

In other words, we had the numbers, and Phosa did not.

As a result, the statement was issued, appearing to condemn Phosa. Mantashe goes further to say that “this year there is going to be a feeding frenzy leading up to the national leadership elections”, and as a result they need to be especially careful.

It’s the first dose of Mantashian language we’ve had this year. Savour it.

And so back to Phosa for a comment. But now he wasn’t giving one, because he “didn’t know which statement to respond to, that of the officials, or that of Mantashe”. Gosh. This is all very grown up, isn’t it? As @PalesaMorodu put it on Twitter, was I sure it was the ANC and not the youth league I was reporting on. At that precise moment, no, I wasn’t sure.

Having said that we have to ask the question, what could Phosa say? He could buckle down and accept the “national officials” are right and he is wrong. Which would presumably get under Julius Malema’s skin a little. There’s no point in speaking your mind only to look like a wally when the teacher comes back into the classroom. Or he could disagree with the officials. Hmm. And declare full-scale war. At a time when he, and the faction that he now appears to be aligned with, is not ready.

So what does all of this mean?

The easy part is to know that it means there’s a very real sense of frustration. Mantashe knows he can turn the screws against Phosa. If there’s one thing Mantashe and Zuma have in spades, it’s patience. They’re not the type to do something because they’ve lost their temper. So this was not so much calculated as spotting an opportunity to sideline someone who was not helpful to their agenda.

But Mantashe and Zuma need to be hugely careful here. This is not a lightweight they’re messing with. Phosa has been around our politics for ages. He’s got a deep hinterland. Not many people have been a national ANC leader, a premier, a lawyer, a freedom fighter and an author of a volume of Afrikaans verse. He used to be the minorities correspondent for the Zuma ANC, appearing next to Zuma whenever Afrikaans community organisations meet with him, doing the translating and the glad-handing.

However, that’s not Mantashe’s big worry. His real problem is that Phosa knows the answers to one of the greatest political questions of our time. How does the ANC fund itself? We know that elections cost money. Razzmatazz doesn’t come cheap. Neither do stadiums and gala dinners. And we know that in one estimate, the party’s centenary celebrations this year could cost up to R100-million. The 2009 election campaign cost R200-million. Phosa is the person that should be able to tell us where the money came from, how it was spent, who paid the most, which government is most generous and why the Dalai Lama didn’t get his visa.

And the real fun is just beginning – Chancellor House is the real story. It’s been shrouded in secrecy for so long that we sometimes forget that it exists. At the moment, the biggest threat to Eskom’s planned power station at Kusile is the fact the boilers are behind schedule. They’re being provided by Hitachi Africa. Who owns shares in Hitachi Africa? The ANC. How? Ask Phosa. We await the leaks with interest.

When you get right down to it, Phosa is this week’s fault-line in a long running war between the central ANC, symbolised by Mantashe and Zuma, and, what for the sake of convenience we’ll call the Limpopo/Malema ANC. These are the two main factions now in our politics. Both sides have certain weapons, and disadvantages. The main advantage in politics, as always, is the power of incumbency. And Phosa is finding out just how hard it can be to fight against that.