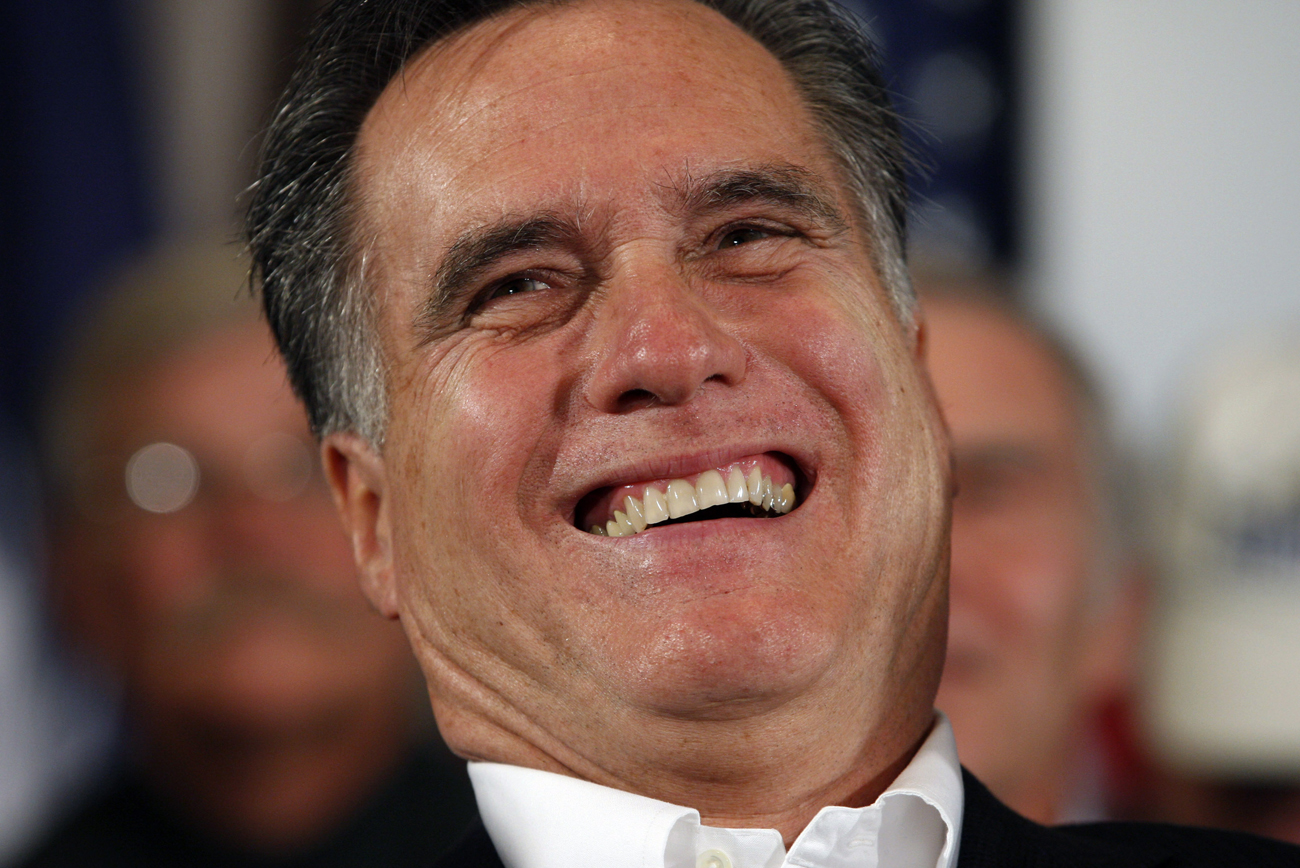 What would you say if we told you that a Michael Moore-style documentary, with Indiana heartlanders weeping over lost factories and foreclosed homes, made a villain of Mitt Romney and his former company, Bain? What if I told you the documentary was made by far-right Republicans? By RICHARD POPLAK.

“Let’s look deeper,” says an elderly lady with a quadruple chin and some form of palsy, “let’s look deeper in his life.” Mitt Romney’s life, if you’re a financial conservative, is business as usual. He got himself some investors, bought up some companies, fucked some people over and made a pile of money exploiting the vast regulatory loopholes that allow raiders like him to drive Brinks trucks into small towns and take the bumpkins for all they’re worth.

But in the new 29-minute documentary, When Mitt Romney Came to Town, this is played as a bad thing. The movie is a super-slick piece of televised propaganda produced and financed by one of the super PACs that have become so influential in the US primaries—Winning our Future, which is associated with Newt Gingrich, Romney’s grouchy fourth-running opponent.

Winning our Future is in part financed by a $5-million donation by notorious conservative benefactor Sheldon Adelson, a casino mogul and known friend of the American Everyman. (That last part was a joke.) The irony here is that the producers of WMRCTT have Michael Moore to thank on at least two counts: firstly, for his “Let’s interview fat people and make them cry on camera” technique of documentary filmmaking; and again for Fahrenheit 9/11, which a conservative group called Citizens United used as an example in the Supreme Court to argue for unlimited spending by organisations not formally associated with candidates during election time. If Moore could do it in 2006, with the backing of the Weinsteins, why can’t Winning our Future do it now, with the backing of Adelson? Super PACs are now legal and this is what they have wrought.

Watching the thing, you’d think Newt had renounced his conservative past, spat on Reagan’s grave, grown his hair and joined the Occupy Wall Street rabble. Nowhere does WMRCTT mention Romney’s left-leaning tendencies as governor of Massachusetts. Nowhere does it discuss his Mormonism. Nowhere does it point to his much-maligned liberal credentials. Nope. He is being taken to task for his years in the private sector, and for being a red-blooded, money-sucking corporate conservative – just the kinda guy Newt Gingrich has spent his years in the public sector protecting. What gives?

What gives is that the gloves are off, and the super PACs don’t really care about the issues, or not nearly as much as they do about their candidates. While it would be insane for Gingrich to trump similar themes during his stump speeches—although Republican candidates have done exactly that—there’s no harm in a documentary saying it for him. Thus, TV viewers and YouTube users are privy to images of Romney getting a shoeshine on the tarmac in front of a private jet; there’s a clip of him speaking—mon dieu!—perfect French. If the guy speaks fluent Surrender Monkey, there is no way he is fit to win a primary in South Carolina. And I say that sincerely.

The movie quotes New York Magazine—nogal!—which wouldn’t spend a Manhattan second protesting its died-in-the-wool liberal credentials. There are snippets from MSNBC (or what the filmmakers claim is MSNBC), the Boston Herald, The New York Times and other lame-stream left-wing media outlets. As Newt Gingrich’s backers snuggle in bed with the oddest of bedfellows, they’re stealing lines from America’s left in order to beat to death a Republican moderate in what must be the most savage attack in a primary this side of, well, Romney’s attacks on Gingrich.

What is notable about When Mitt Romney Came to Town, however, is how influential the super PACs have become, mostly as generators of superbly produced propaganda. The speed and accessibility of filmmaking technology has something to do with it. Yet WMRCTT ranks as the most polished example so far, and having raised the bar that high, it will be interesting to see what follows. Romney is always shot from below, like Darth Vader, cutting a swathe through America, leaving scorched earth and broke-ass people in its wake. Romney, thanks to his “wealthy Latin American” investors, “is worth over a quarter of a billion dollars today,” intones the sombre voice-over, while Bain is worth $64-billion. For Republicans, you’d think this was all in a day’s work—hats off to the Romster and all that. But no. That wouldn’t play in South Carolina. And so, we watch sad people with no teeth lamenting the evils of a supremely talented capitalist.

Should Romney make it through the primaries, all the Democrats will have to do is purchase this documentary from Adelson, and run it four times a day on every station. While Gingrich is not directly responsible for WMRCTT, the man who perfected the politics of destruction is being outdone, and in the process, has handed his ultimate opponent a loaded weapon. By trying to destroy his primary opponent, he may well have destroyed Republican chances for the White House. DM Photo: U.S. Republican presidential candidate and former Massachusetts governor Mitt Romney laughs during an event with war veterans in Hilton Head, South Carolina January 13, 2012. Charges that Romney’s private equity firm Bain Capital got rich by buying and selling companies are winning the former Massachusetts governor new support from party leaders worried that the onslaught might weaken the front-runner in the race for the Republican presidential nomination. The South Carolina primary will be held on January 21. REUTERS/Jason Reed