Is the war against piracy being won? 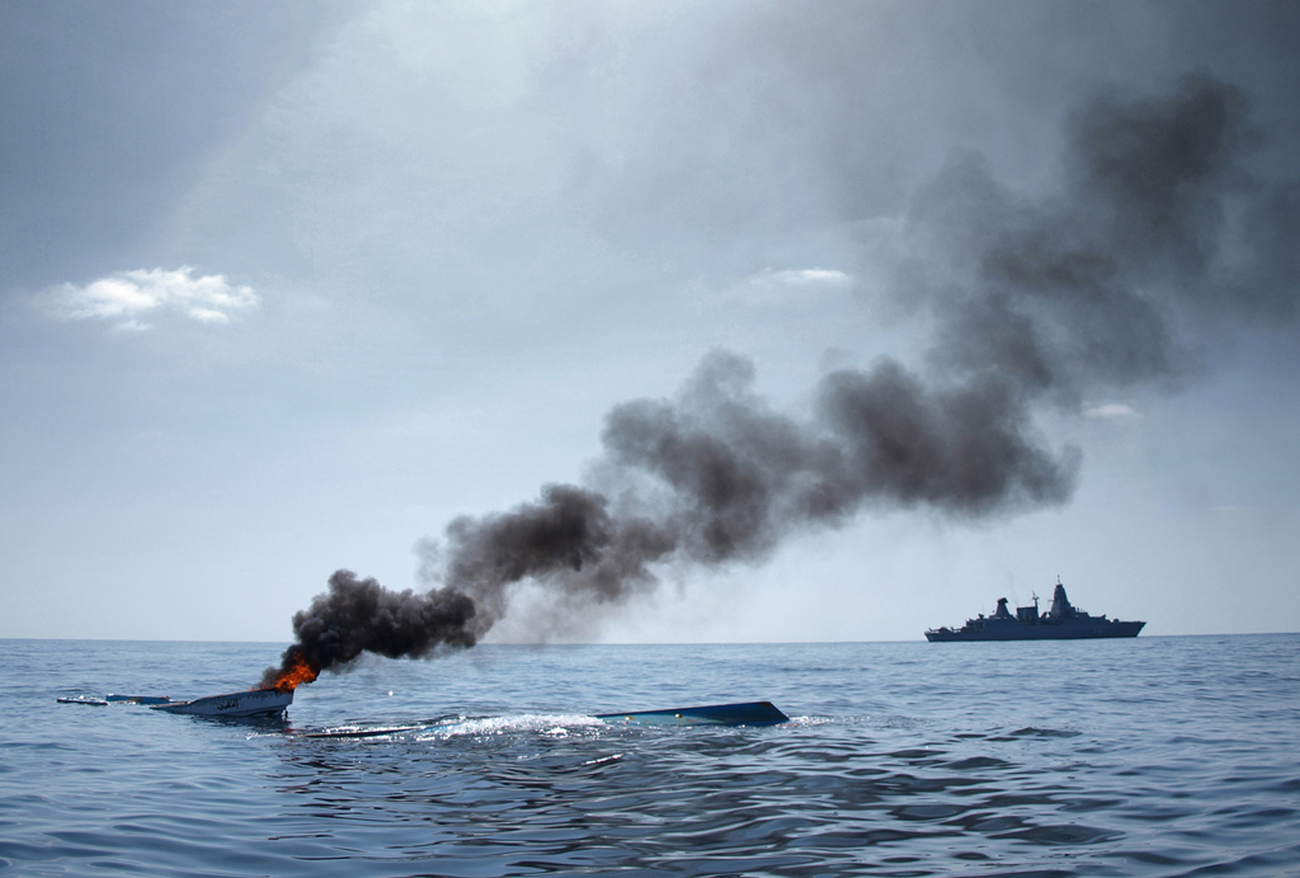 The capture of 13 Somali pirates by a Nato-led force this weekend is being hailed by the British government as evidence the tide is turning in the war against piracy. REBECCA DAVIS examines recent developments to make international shipping lanes safe once more.

At dawn on Saturday, Nato forces intercepted a dhow suspected of being a pirate vessel off the Somali coast. First with helicopters manned by Royal Marine snipers to warn the dhow to stop, the troops then sent in speedboats to board the boat. Thirteen Somali pirates surrendered, with no casualties on either side.

A “selection of weapons” was found on board, said the ministry of defence. UK defence secretary Philip Hammond hailed the interception as “a clear demonstration of Britain’s ability to tackle piracy that threatens our interests”. Captain Gerry Northwood, commander of the mission, said they were sending, “a clear message to other Somali pirates that we will not tolerate their attacks on international shipping”.

There have been other piracy-related success stories in 2012. Last week seven Somali pirates ambitiously tried to hijack a Spanish warship with a crew of more than 150, opening fire with assault rifles before trying to clamber up the side of the massive ship. The crew fired back, and the pirates were forced back into their small skiff and captured. They chose the Patino, the vessel currently leading the EU’s multinational anti-piracy force.

The very fact that seven men in a tiny boat believed they could successfully take on a 17,000ton warship is a telling indicator of just how brazen Somali pirates have become. A new technique seems to be that of hijacking cargo ships and then using those to launch further attacks. This was the case with a Greek-owned chemical tanker, the Liquid Velvet, hijacked in November. Manned by pirates, the ship moved towards the Gulf of Aden and into international waters last week, before being intercepted by another Nato ship part of the “Operation Ocean Shield” in the waters around Somalia. The pirates were armed with rocket-propelled grenades and machine guns.

When hijacked ships are not used as “motherships” to attack other vessels, they are, of course, held for ransom. The Telegraph reported last week that seven major merchant vessels are currently being held ransom, with multi-million pound ransom negotiations involved in each case. A UK government report on piracy published in December found the average ransom payment had increased from $600,000 in 2007 to $4.7-million currently. The financial toll of piracy on the shipping industry is now estimated at between $8-billion and $12-billion a year from the longer routes ships must take and the punishing premiums insurance companies now demand.

And, of course, there is the human toll. An estimated 1,016 people were taken hostage by Somali pirates last year alone. One-hundred-and-seventy-two hostages are being held as you read. Possibly the story which most horrified the world last year was that of Frenchwoman Marie Dedieu, 66, kidnapped from her beach house in the Lamu region of Kenya in October last year by Somali gunmen. Dedieu, a prominent figure in the French feminist movement of the 70s, was a quadriplegic who required four-hourly medical treatment for a heart condition. She died three weeks after her abduction.

In the face of public outrage, responses to piracy have been forced to change. There are now more than 60 private firms offering armed maritime protection for the area around Somalia. In October 2011 UK Prime Minister David Cameron announced that British ships would be allowed to apply for a licence to carry armed guards on board in dangerous waters. The decision was made after the Commonwealth summit in Australia discussed the problem of piracy off the Horn of Africa.

In 2012 even more extreme solutions are likely to be sought. Channel 4 News reported that Lloyds insurers would soon launch what amounts to a private navy (or “Convoy Escort Programme”) to lower insurance risks when crossing pirate-infested waters. It is now also increasingly common for ship owners to carry devices such as water jets on board and make use of technology like “sonic deterrents”, also known as “long range acoustic devices”, which can emit painfully loud sound for long distances and cause permanent hearing damage. But, of course, these measures can only protect (mainly commercial) ships and don’t address the root causes of piracy. The UN does run a number of “counter-piracy” projects in Somalia, but these seem largely focused on ways to bring pirates to justice including improving prison conditions, building courtroom facilities and training judges.

Two NGOs in Somalia, Saferworld and World G18 Somalia, told the UK government’s investigation into the problem there was a major need to provide alternative employment options to piracy. However, some experts say there are currently too few options to develop different sources of legitimate income and what is needed is a more comprehensive nation-building project. There seems to be consensus on the idea that greater engagement with communities on the ground in Somalia is necessary.

The government report found an “ambiguous and shifting relationship between Somali pirates and the local communities, local and national politicians, and Al-Shabaab” (the militant Islamist group which controls large parts of southern Somalia). Al-Shabaab, the report suggested, “seems to regard the buccaneering and this manner of raising money as an improper activity that goes against the moralistic and strict version of Islam that it follows”. The report’s recommendation was that the UK government strengthen its engagement with Somalian civil society organisations and indeed the UK’s foreign and commonwealth office has said the government would commit £2-million to economic development projects in coastal regions and spreading awareness about the dangers of piracy.

Those are long-term projects, however, which will inevitably take time to bear fruit. In the meantime, independent maritime security consultant Paul Gibbins warned Channel 4 News the recent drop in numbers of successful hijackings should not lead to complacency. “Pirates are not stupid,” he said. “In the past they have shown they can change tactics to adapt to the changing security situation and I think they will respond to current measures”. DM Photo: The German Frigate ‘Hamburg’ (R) patrols after destroying two fishing boats (L) which were discovered floating keel side up in open waters off the coast of Somalia, in this undated handout photo made available to Reuters August 15, 2011. REUTERS/Bundeswehr/Christian Laudan