Woza Albert! And welcome back - you're still so true

Woza Albert! And welcome back – you’re still so true 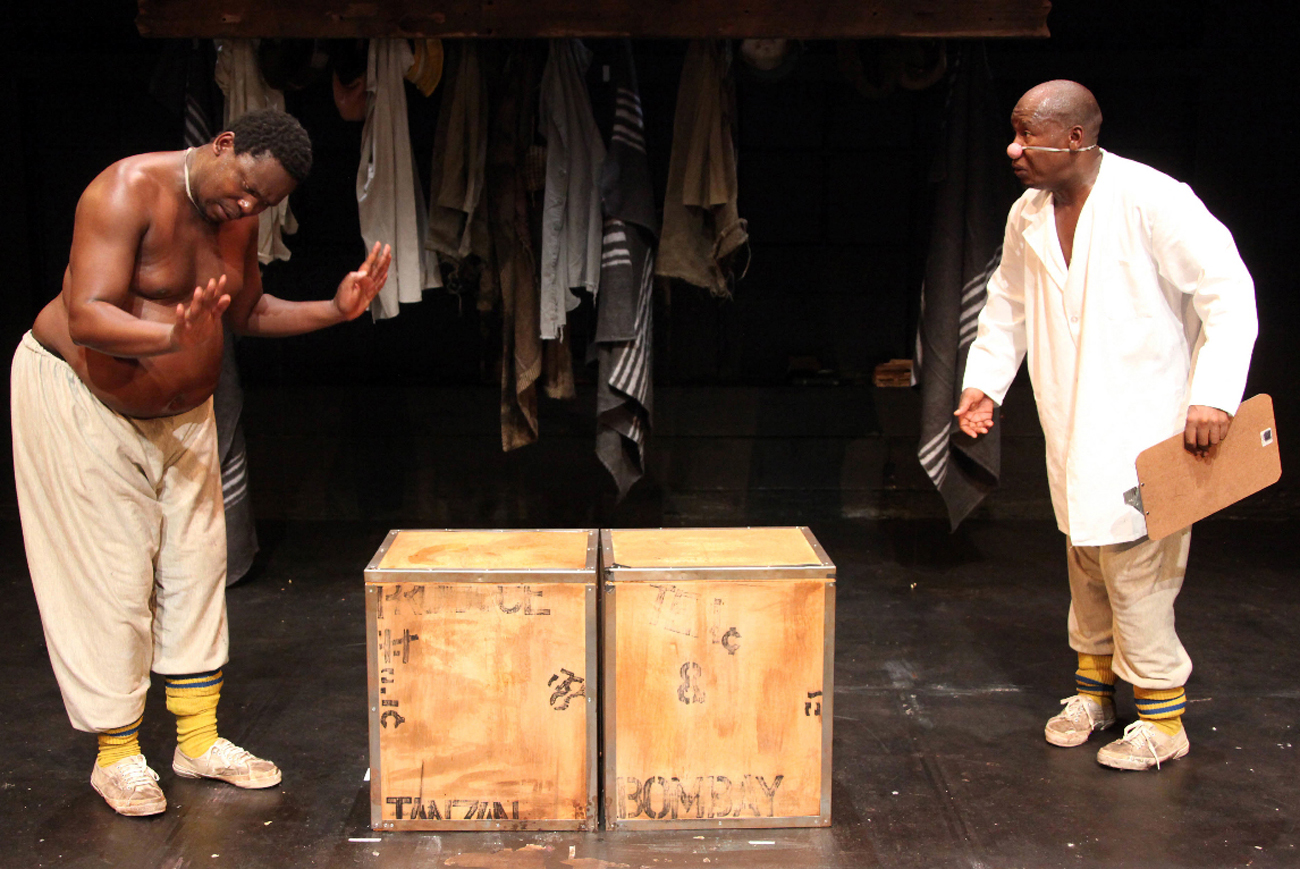 With the ANC planning to rule until Jesus returns, it’s worth asking what Jesus would think if he did actually materialise in South Africa today. LESLEY STONES believes he’d probably think much the same as he would have done in 1981 when the play Woza Albert! was written.

That’s a sad indictment of the lack of progress made since the horrors of the apartheid era that the play attacks so powerfully. So it’s fitting that Woza Albert! has been revived to make us take another look at where we were compared with where we are three decades later.

This is an extremely physical piece of theatre, with actors Mncedisi Shabangu and Hamilton Dlamini dashing around in takkies and tracksuit bottoms. They’re quickly drenched in sweat, partly because the air conditioning failed at the Market Theatre and partly because the play is so demanding. It’s amazing just how much noise two men can make as they imitate prison sirens, trains, barking dogs and a dozen other sounds of daily life of the streets of Joburg.

The play by Percy Mtwa, Mbongeni Ngema and Barney Simon is stuffed with wit and satire. Shabangu and Dlamini play a variety of characters to highlight the inequalities of life when whites had it all and blacks picked up their scraps. They do it beautifully, quickly grabbing different rags or clothes from a rail to transform themselves into the next persona. The costumes by Thando Lobese greatly enhance the characters, whether a cemetery janitor or an old mama foraging through a dustbin. Pink clown noses turn them into Afrikaners, emphasising the point in a subversive as well as visual way.

At first I had trouble understanding Dlamini as he barked orders in an Afrikaans accent, but either my ears adjusted or he toned it down to be more comprehensible.

Both actors bristle with skill and vigour, and Shabangu’s amazing facial expressions really touch the heart. Playing an old tattered tramp he gallantly tries to thread a needle to repair his threadbare coat. The audience clapped spontaneously when the imaginary thread finally went home through the imaginary needle.

Dlamini’s most memorable moment is as a young child selling flyblown meat in a butchery. As he wishes that Jesus would come and grant his wish of going to school, he looks poised to burst into tears. Such malleable, emotional faces make the play as effectively as do the words. After a few scenes in which various citizens are asked their opinions about Jesus making a comeback, the Son of God arrives. South Africa’s government is highly chuffed, and Dlamini gives us a smug “Prime Minister” sticking two fingers up at the rest of the world.

Then Jesus turns out to be a bit of a trouble-maker, sitting with the striking workers at a brick factory. In a lovely parody of the betrayal in the Garden of Gethsemane, Dlamini plays a worker bribed with R10 to call the cops to arrest the agitator. But, being Jesus, he flies out of the 10th floor window at John Vorster Square – upwards, rather than downwards, thankfully – and escapes from Robben Island by walking across the water. At which point Shabangu and Dlamini give us a lovely impression of a helicopter crew sent to blow him to smithereens.

Directed by Prince Lamla, this new production is a vibrant, physical show with a nicely varied pace, some lovely humour, fabulous acting and a message still well worth experiencing. DM

Woza Albert! runs at The Market Theatre until 5 February.