The decreasing loneliness of Thabo Mbeki

The decreasing loneliness of Thabo Mbeki 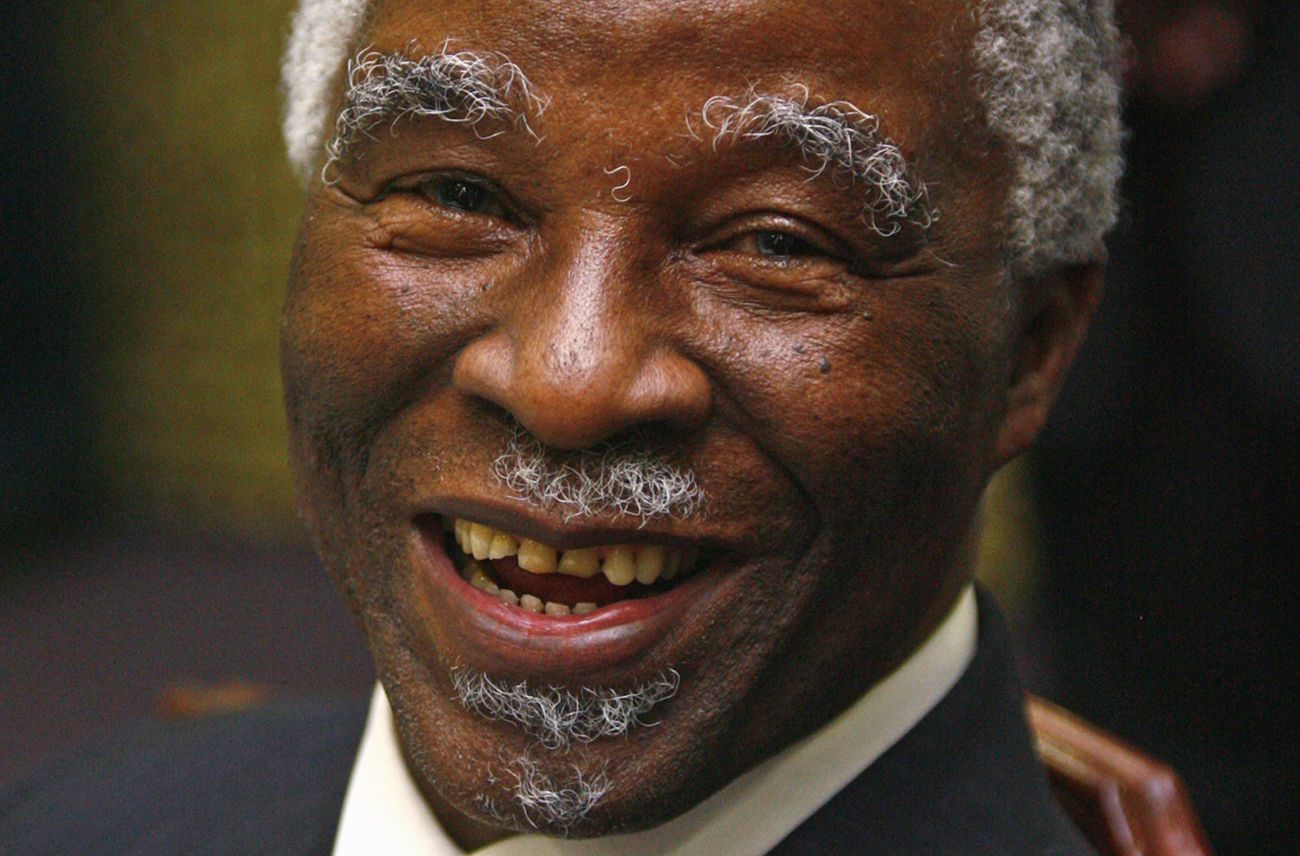 It's easy to stick the boot in with Thabo Mbeki. Aids, Zimbabwe, the Vusi Pikoli/Jackie Selebi saga... we could go on. But as always with our politics, it's the past that changes. His legacy could be a part of our ever-changing past. One thing he did absolutely correctly was, after stepping down without a fight, keeping his own counsel. By staying out of domestic politics, publicly at least, he allowed the current ANC leadership to be seen to be leading the country, without a former leader carping from the sidelines. But this could slowly be changing. The “how” is interesting. The “why” could be more fun. However it's the “will it continue” that is really fascinating. By STEPHEN GROOTES.

Thabo Mbeki has a voice that resonates with a certain age in our politics. The slight shuffle before answering almost every question with “Well”, the unique style of writing, the mix of ivory tower-ness with a willingness to write, personally, weekly missives on subjects that took his fancy, all add up to an interesting political personality. It was a part of that complex brain that saw him take his recall on the chin, the televised address to the nation indicating he would resign, and then the silence that followed. He really only appeared in public again at Jacob Zuma’s presidential inauguration. It was over a year after his recall that he made his first public speech. I remember it well – it was the first time he ever agreed to do a one on one interview with me. I was slightly shocked when I started by asking, “Mr President, it’s been a long time, how are you?” and he replied with “We are very well”. Royal much?

But slowly he’s started to come back. There was the condemnation of the EU airstrikes against Libya, the odd interview, and then, finally, his blistering public condemnation of Willem Heath’s claims that Mbeki was behind the prosecution of Schabir Shaik and the charging of Zuma with rape. It was Heath’s still unexplained rush of blood to the head that really allowed him back in. Zuma knew this, and acted to ensure that this opening wasn’t going to stay unused for long by getting Heath to resign. Mbeki has always acted to protect his legacy, and was going to keep pushing on Heath until something burst.

Over the weekend Mbeki attended the ANC’s centenary celebrations. You can imagine the political calculations on both sides. For Zuma not to invite him would attract all kinds of accusations, particularly when it really suits him to call for unity at the moment. For Mbeki it would have been even more aggressive for him to refuse the invitation. Perhaps the real reason only Zuma was given the stage on Sunday was not Julius Malema at all, but because he was afraid of what Mbeki might say?

Malema himself is quite happy to use Mbeki’s name. He told SAfm on Tuesday that he wanted Mbeki to play more of a role in our politics because we need “his wisdom”. While presumably the main aim for Malema is to contrast Mbeki with Zuma – unfavourably for Zuma – there’s still something else at play here. If you listen to Malema talk about Libya, and Mbeki talk about Libya, it’s almost as if you’re hearing the same person. Already there has been speculation about a plan to get Mbeki elected chairman of the ANC at Mangaung. Sometimes, one really has to wonder if Mbeki has been involved in the entire Malema story. It would be a Machiavellian move to try and control him, or just nudge him, from a distance, from time to time.

At the same time, we have to ask about the volume of the cheers Mbeki received when he was announced at the stadium on Sunday. There was significant noise – it’s difficult to know if that was about respect, or support, or just a fond memory.

There could also be another dimension: that the ANC’s experiment with empty vessels and cacophony is nearly over.

An explanation. When Zuma was elected at Polokwane, he was asked what his policy priorities were. He answered by saying he was “an empty vessel” for the members of the ANC – he would be directed by them. The result has been a huge cacophony, in Alliance lingo, “public spats”. Leader against leader, publicly. It’s been fun for the likes of us nasty political hacks, it’s all very democratic, but it’s also tiring. And destructive. People fight all the time, they get a taste for political violence, and they never get anything done.

Perhaps there’s a part of the ANC that is tired of this. Maybe there’s a part of their soul that harks back to the certainty of the Mbeki years. Cabinets hardly changed, there was one person in charge, and one person that mattered. There was none of the chaos that we seem to have today. Of course, they forget the sheer awfulness that accompanied Mbeki years too. The Aids denialism that condemned so many to death, the abuse of power that was shown in the use of Bulelani Ngcuka to prosecute Zuma etc. It’s why some dictators survive for so long; they provide the sense of security that’s brought by certainty.

Having said all of that, what are Mbeki’s realistic prospects? The ship has sailed, the ANC has moved on. It’s a different world now. There are too many people around with memories long enough to allow him a serious leadership role. Cosatu for one, surely, couldn’t wear it. It’s hard to imagine a scenario that sees Mbeki winning any kind of serious leadership role.

But this year is his last chance. He’s getting on a bit, even if he does look in better shape than Zuma (they are virtually the same age). This is the Centenary Year. It’s an opportunity for former leaders to give speeches (well, knowing Mbeki, lectures would be more accurate a term), to talk about the glorious past of the ANC, and to make remarks about its future direction. In November, he will get a whole month dedicated to himself. (Watch the ANC start to reduce the importance of these “leadership months” as it gets closer to that date.)

But overall, Mbeki’s chances indeed look very slim. However, what he does have the chance to do is to secure his legacy. This matters to him. It’s important to him to have been seen as a good, successful president. That cannot really happen while Zuma is in power. He stands a much better chance of making sure his legacy stands up to scrutiny if Zuma is gone. Which is why he is one of those people watch closely, even if you can’t expect many of his movements to be public. DM