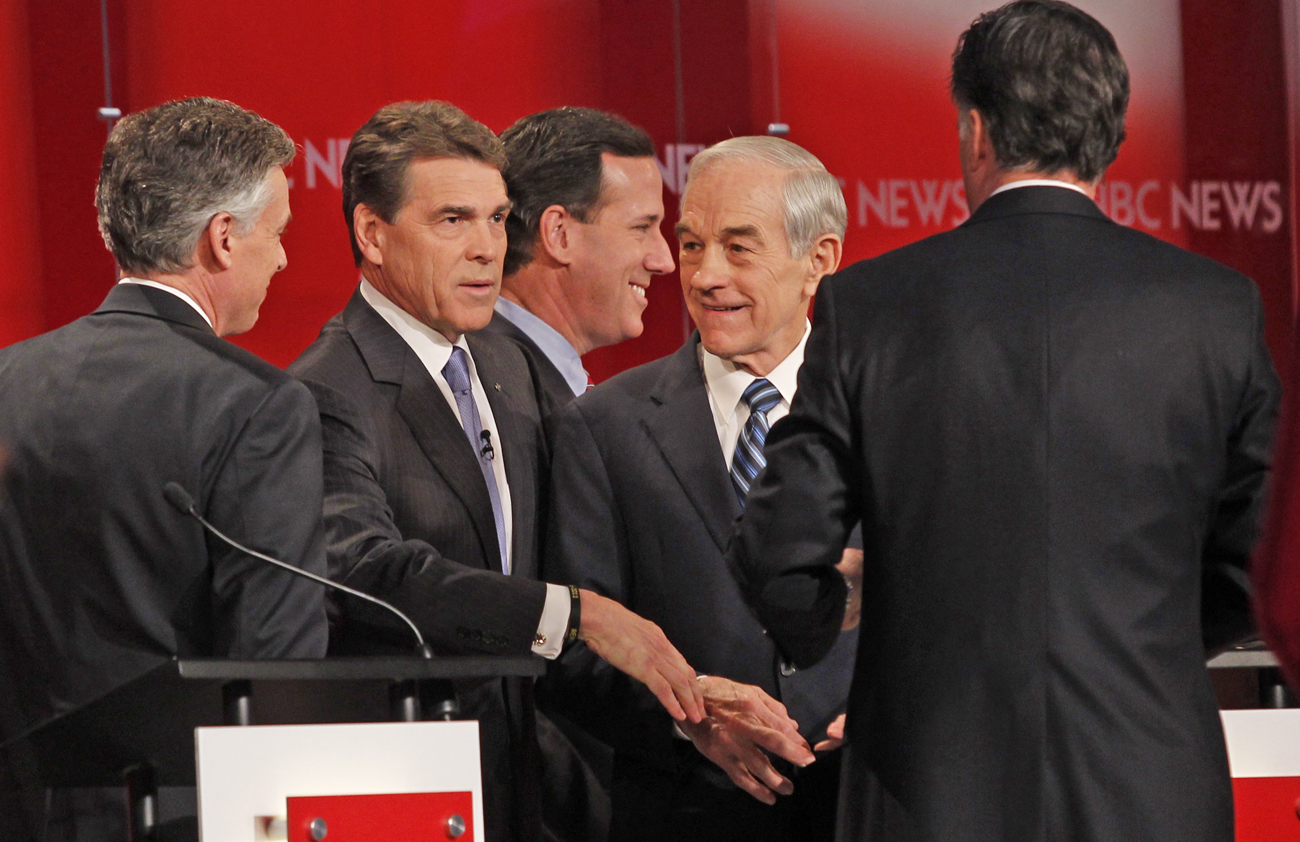 The late president Ronald Reagan used to call it the 11th commandment, “Thou shall not speak ill of any fellow Republican”. If this is divine law, Mephistopheles is clearly putting out the welcome mat for the clutch of the Republican presidential candidates now rambling all over New Hampshire’s picturesque villages and industrial towns – and in the exurbs of not-so-far-away Boston – in preparation for Tuesday’s primary election. More than a gentle ramble, pedal to the metal is more like it for most candidates as the first primary of the 2012 presidential campaign is now upon us. By J BROOKS SPECTOR.

In New Hampshire this year, even more than in Iowa, the candidates are turning their attacks on one another even though they are all in the same party. More than one columnist has clucked a tongue, calling the unseemly squabbling a circular firing squad. In a mirror image of the famous line from “The Godfather”, among Republicans, the campaign attacks suddenly have become personal, not business. However, these attacks are music to the ears of the Obama campaign planners as they gear up for the November general election – sharpening stump speech attack lines, preparing fact sheets and trying out potential TV ads focusing on a recovering economy and a strong international security position.

Since Friday, the remaining Republican candidates vying to confront Barack Obama in November – minus Texas governor Rick Perry who headed off to South Carolina instead – have participated in two televised debates, consumed countless cups of coffee, slices of pizza and apple pie, pancakes, hot dogs and hamburgers in diners across the state as they attempt to connect up close and personal with New Hampshire’s notoriously fickle electorate. And this is an electorate that has grown accustomed to getting a close first-hand sense of candidates before committing to vote for anyone.

New Hampshire’s primary, the first in the nation, claims to be a bellwether of national sentiment, but more often it has teased the political gods by raising up the hopes of unconventional candidates and crusading underdogs, only to see them ground down by all the unremitting battles in all the other states where serious money for marketing, media, polling, transportation, consultants and staff becomes much more important than in New Hampshire’s retail, one-vote-at-a-time primary election.

The most recent polling data now says Mitt Romney should still roll on to a comfortable margin of victory in New Hampshire, relegating Rick Santorum, Newt Gingrich and Ron Paul to also-rans, with Jon Huntsman even further behind. Rick Perry is not actively contesting the vote, and several others will get a sprinkling of the votes.

According to the polls, Romney now holds about 33% of voter support, with 20% backing Ron Paul, Jon Huntsman standing at 13%, Gingrich at 11% and Rick Santorum at around 10%. A second poll says Romney has around 41% and Paul 17% of the voters’ support. Part of the uncertainty in New Hampshire is that independents not registered with a particular party can vote in the Republican (or Democratic) primary. That, and the question of actual turnout on the day of voting, lends uncertainty to the eventual results and makes it the horse race so beloved of political journalists.

Beyond the candidates themselves, probably the biggest story of this primary has been the impact of the “super PACs” – organisations that raise and spend money on behalf of the ideas of candidates, without being formally tied to individual candidates. While individual campaign contributions to a candidate are limited by law to $2,500/person, super PACs can essentially raise and spend unlimited amounts of money on behalf of the ideas of a candidate, or to attack the ideas, background and experience of another one. Legendary California state assembly leader Jesse Unruh’s equally legendary dictum, “money is the mother’s milk of politics”, has never, ever been this true.

The door to this “political free fire zone” was opened wide when the Supreme Court effectively ruled in the “Citizens United” case that money was a form of free speech and that companies and organisations were effectively the same as people – giving companies and organisations the right to spend away without restriction. In Iowa, supporters of Mitt Romney unleashed a blistering attack on Newt Gingrich, and now friends of Gingrich have set off an equally pointed attack on Romney, amplifying attacks Romney received in the second candidates’ debate over the weekend that was held under the banner of TV’s widely respected Sunday news show, “Meet the Press”.

When the Gingrich-supporting super PAC received $5-million from one long-time supporter, the “gotcha!” attack game suddenly went into overdrive. Money helped develop and distribute an attack documentary – more properly, perhaps, defined as an advertorial film – and now this money is supporting TV ads in New Hampshire that are quoting the film. Naturally, too, the media and Internet blogs have gotten all excited over the film and are busily distributing the juiciest bits even further. The key target of this film is Romney’s record at the Bain Corporation – the venture capital company Romney helped found.

In the film, just plain, down home folks are shown speaking plaintively how Romney didn’t give a damn about the little guy, that he was in it just for the money – and that he generally acted like a soulless plutocrat, corporate looter; veritably gorging on the flesh of impoverished workers. There may be some resonance for this in New Hampshire – the state has lost lots of jobs in its traditional industries over the years to international competitors. The attack film and resulting ads may give Gingrich a little more traction as its message hits home with people up through Tuesday. This attack has also come in tandem with Gingrich’s strident attacks on Romney in the final debate on Sunday, calling Romney’s claims he was never a career politician, merely a business leader who saw a need to serve as nothing more than “baloney!”

Remember: these people are in the same political party.

And as for Rick Santorum, although he is unlikely to score really big in New Hampshire, he may find more fertile territory in the South Carolina and Florida primaries that come up between now and the end of January. Santorum has positioned himself squarely in the camp of values voters who have deep misgivings about the LGBT agenda of gay marriage and other rights or right-to-life/family values supporters who oppose the continuation of abortion rights. Columnists have had a field day in the past few weeks, complaining that Santorum is effectively arguing for a veto for the religious right (including Catholics in Santorum’s case) over civil law. And pointing out that he became the same kind of oleaginous, inside-the-Beltway influence peddler Gingrich was, once Santorum was defeated in a bid for re-election as a senator from Pennsylvania.

In fact, Santorum’s appeal is somewhat more complex. Political scientists note the Republican Party is now effectively split into four wings: mainstream, main street, business-friendly supporters at the core of the Romney camp; the libertarian wing of the party that eschews virtually all government regulation, government programs and projects, and in Ron Paul’s case, hopes to abolish the role of the Federal Reserve Bank as well by substituting a gold-backed currency; social values/family values voters motivated primarily by issues not actually up for debate as measures in congress; and, crucially, a fourth group suspicious of government, fearful of economic distress but supportive of government benefits for the deserving poor.

Santorum has actually also staked his claim to this latter group of voters, as well as the values voters – and he may force a surprise or two in the upcoming primaries. This could be especially true in the South and the old industrial Midwest where such people, mostly former conservative Democrats, are now somewhat unsettled Republicans and conservative Independent voters. But, as always, money still talks. Santorum has – in comparison to Mitt Romney at least – precious little of it to use to finance primary campaigns across the nation, and so the best odds still favour the ex-governor of Massachusetts, the serial flip-flopper and the intellectual progenitor of the Obamacare Republicans say they love to hate. DM