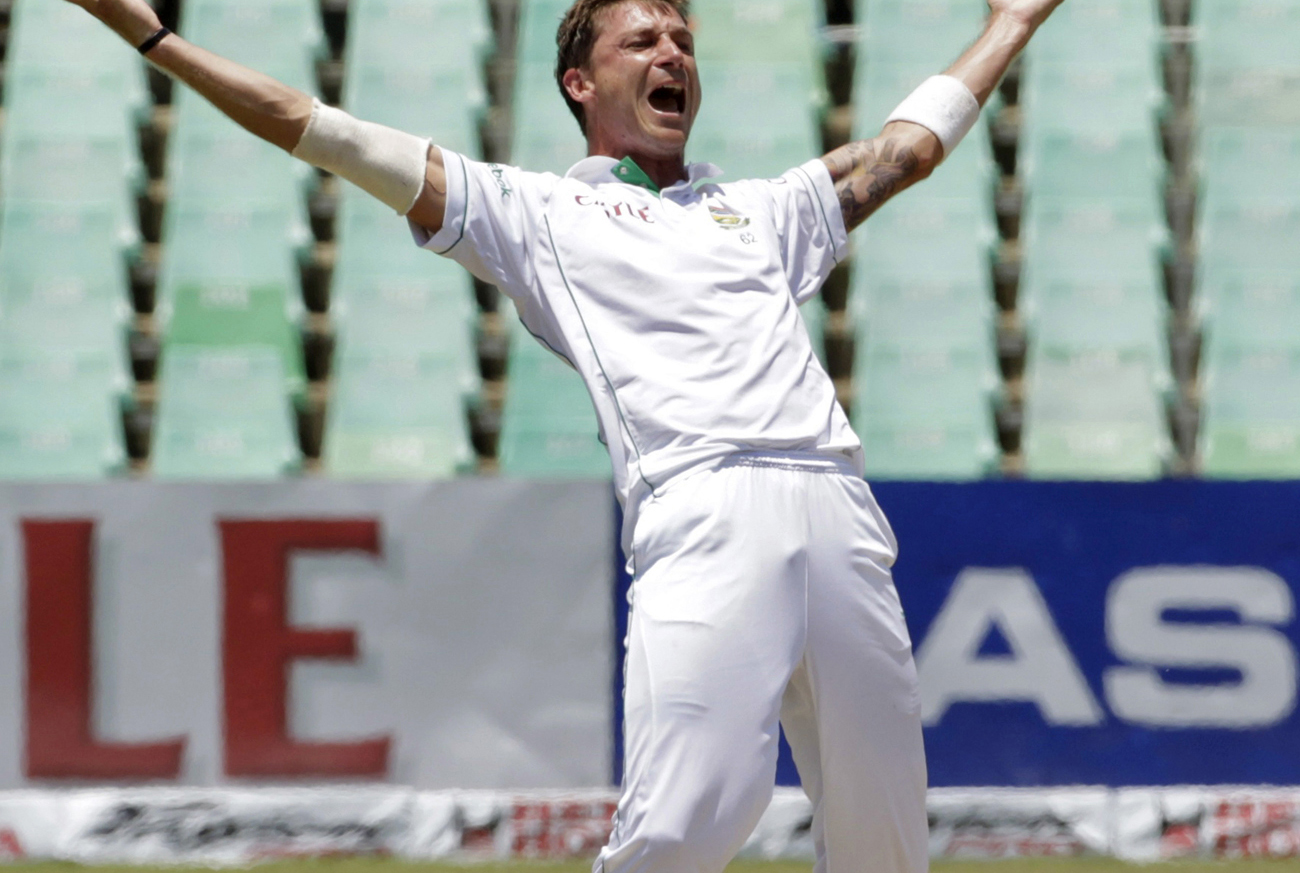 Dale Steyn is only half-way through his Test bowling career but he’s already one of the greatest players the world has ever seen. How much higher can he go? PAUL BERKOWITZ hazards a guess.

Dale Steyn didn’t have an illustrious start to his career. He debuted in the summer of 2004/2005 against a strong England side in an ill-fated home series the Proteas lost 2-1.  He was drafted in as first / second change bowling cover for a South African attack depleted through injury. He only played in three Tests of the five-Test series, taking eight wickets at an average of 52 and a strike rate of over 75. He wouldn’t play Test cricket for more than a year.

He returned to the Test side in 2006, opening the bowling with Makhaya Ntini against New Zealand, and immediately made an impact with the new ball in his hand, taking his first five-wicket haul. Over the course of 2006 and 2007 he showed the first glimpses of his destructive talent – two more five-fors (five wickets in an innings) in Colombo and Karachi – but he stamped his signature  on the game in South Africa’s 2007/08 home series against New Zealand.

This was the series in which he made his mark on Test cricket as a destroyer of batsmen and a sultan of swing bowling. The series was one of those woeful two-Test affairs, but Steyn still managed to take 20 wickets and put a man in hospital.

Steyn took his first ten-for (five wickets in each innings) at the Wanderers. For his encore at Centurion Steyn began by fracturing Craig Cumming’s face. The opening Kiwi batsman swatted at a short Steyn delivery which reared up and smashed his cheek. Cumming retired hurt (and played only one more Test series in his career). The surviving Kiwi batsmen were picked off by Steyn for the most part (aided a bit by some questionable lbw decisions) and the match ended inside of three days. Steyn had back-to-back ten-fors, two Player of the Match awards and the Player of the Series award. He also had a taste for batsmen’s blood, preferably curdled with fear.

His most prolific year was 2008. He took 74 wickets in 13 Tests and capped it all off with a Man of the Match award at the MCG Boxing Day Test. His two five-wicket hauls and 180-run partnership with JP Duminy (in which he scored 76 runs) enabled South Africa to win their first series in Australia since readmission.

Through 2009 and 2010 he continued to tick more items off the Test bowler’s bucket list. Success on the subcontinent? He destroyed India at Nagpur with an inspired spell of reverse swing and a career best seven for 51 in the first innings. He’s bagged five-fors against all opposition and in almost every country (England and Bangladesh still elude him). There are few goals which remain outstanding, the most obvious one being a lack of success in England. During the Protea’s last tour in 2008 injury robbed him of a full opportunity. The upcoming English tour in July gives him a chance to check this box.

He took his 250th Test wicket at the start of the Protea’s three-Test series against Sri Lanka, in Centurion in December 2011. He reached this milestone in his 49th Test match, making him the second-fastest Test bowler ever to take 250 wickets, after Dennis Lillee. Steyn could well have shared historic honours with Lillee if he’d taken just one more wicket in the previous match. If the substitute fielder had not grassed a catch in the first innings or if Steyn himself had held on to a sharp return catch in the second innings he would be topping this particular record list.

Steyn, who is effectively half-way through his Test career, is already toe-to-toe with most of history’s bowling greats. He’s the fifth-most prolific wicket-taker South Africa’s ever seen and in the top 30 wicket-takers of all time. His bowling average is among the top 10 of all modern bowlers (those who debuted after 1976 and the advent of covered pitches). His strike rate is exceptional needing fewer than 40 balls to take a wicket on average. Only three other bowlers have a better strike rate and none of these has played in more than 20 Tests (usually the yardstick for serious comparison). He is arguably the most destructive Test bowler in the history of the game.

Over the course of this summer the spotlight has been on the new quick-draw artists rolling into the frontier town, a-drinkin’ and a-hollerin’ and generally tearing the place apart. Marchant de Lange most recently blew away the opposition in the first innings of South Africa’s annual Kingsmead loss. His seven for 81 is the third-best debut ever for a South African bowler. For the three games before that a certain Vernon Philander had his grand debutante ball moment, taking 24 wickets at an average of 12.4 runs.

Steyn hasn’t been hiding in the shadows. In the five Tests played this summer against Australia and Sri Lanka his wicket tally reads six, five, six, five and three. To average more than five wickets a Test match (and almost three wickets an innings, plus 17 five-fors and four ten-fors) has been achieved by only a handful of bowlers, but it’s what we’ve come to expect of Steyn. He’s the one we instinctively turn to when we need the bad guys run out of town, the mysterious law enforcer from the distant northern mining lands.

What does the future hold for Steyn, and how much higher can he ascend through the bowling pantheon? If he doesn’t succumb to serious injury a la Brett Lee and if Cricket South Africa doesn’t do any further damage to the Proteas’ Test schedule, he should easily bag 400 wickets. There are good odds on him overtaking Shaun Pollock’s tally of 421 to become South Africa’s most prolific wicket-taker. Four-hundred-and-fifty wickets is on the cards and you may even find takers for a wager on 500 by the time he’s done.

South Africa’s newfound embarrassment of fast bowling riches may mean Steyn has to fight harder for his share of enemy scalps, but bet against him at your peril. When all the tumbleweed has drifted past and the young deputies are surrounded by black hats, don’t forget which sheriff you trust to clean up the town. DM