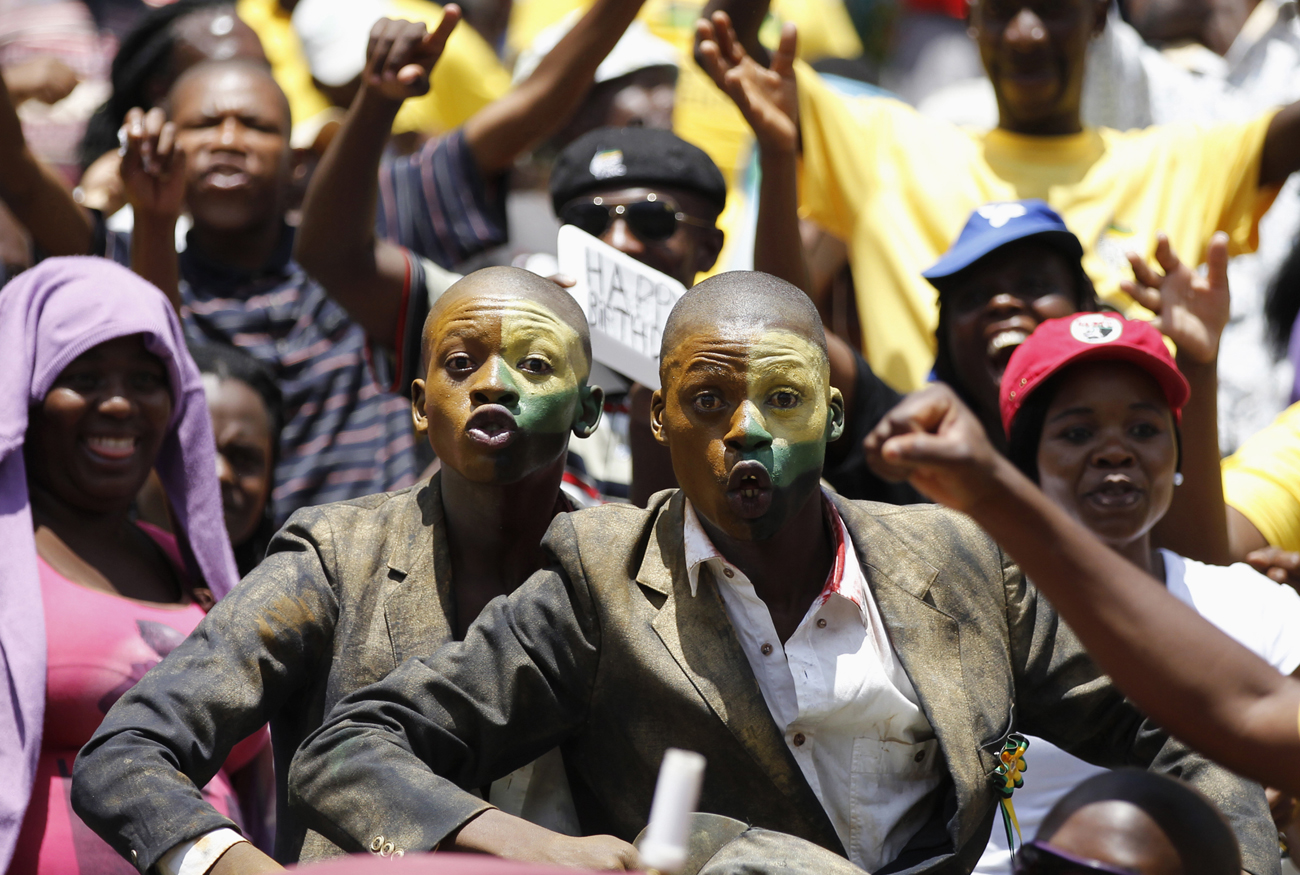 The African National Congress turned 100 years old on Sunday. Never a party to pass up an opportunity, the festivities were extravagant. It was a chance for comrades to lay aside their differences and take an indulgent look back over the past century, but even so, some had to be reminded that this was not the platform for factionalism. SIPHO HLONGWANE was there to take it all in.

There was little to suggest much effort had been made to ensure that the ANC’s three-day-long 100th birthday would run without a hitch. Which is not surprising – the logistics of arranging the movements and cooperation of hundreds of thousands of people are beyond the scope of most political parties. In the end, the ANC had to rely on everybody being good sports and doing what they were told, and this was reflected in the fact that everything ran overtime as has become customary. Cooperation wasn’t always immediately and happily given, but more on that later.

Still, it was a good party, mainly because the symbolism and meaning of it all was not lost on anyone. The ANC is by far one of the most important liberation movements in Africa – certainly THE most important one in South Africa – and for it to usher in a new century of existence given the reason it was founded and the tremendous amount of pressure it faced over the years is nothing short of amazing.

Much of the weekend was devoted to reminding everyone in Bloemfontein of the party’s history. The street poles leading up to the Free State Rugby Stadium, where the main event was, were adorned with “thank you” messages directed at neighbouring countries and others like Cuba that were pivotal allies to the ANC prior to 1994. ANC flags were everywhere.

Near the Waaihoek Wesleyan Church, the physical birthplace of the ANC, the municipality must have dropped a sizeable amount of money to commission and erect gigantic banners of iconic party leaders like John Dube and Nelson Mandela wrapped around a cluster of cooling towers. Cars were draped in party livery. And, as if to thrust the point even further home, wherever one turned near the stadium, the Sopranos bike gang sputtered and roared about with ANC flags attached, much to the annoyance of the long-suffering residents of Mangaung.

On Saturday night, Zuma hosted a gala dinner where African politicians such as Kenneth Kaunda, Yoweri Museveni and Namibia’s Hifikepunye Pohamba took turns to reminisce about the days of the struggle against apartheid. Jesse Jackson was there too.

On Sunday, most of Zuma’s 90-minute speech was devoted to thanksgiving. He mentioned almost every single important death – from Solomon Mahlangu and Steve Biko to Helen Joseph – in the course of the struggle.

The January 8 Statement is traditionally an opportunity for the ANC president to reflect on the coming year and offer guidance. This one was no different, except that the reflection spanned the whole of the last century. It made for a wan speech and the stadium emptied rapidly as Zuma droned on. An approaching thunderstorm may also have helped sway some minds.

The ANC has been accused, mostly by foreign press, of washing out the names of non-affiliated anti-apartheid leaders from history in its celebrations. The party made just the right number of nods towards the likes of Archbishop Emeritus Desmond Tutu and other leaders of the United Democratic Front – but the challenges of the day were of a more recent nature.

Simply put, some guests at the party were there to remind the ANC that all is not well. This became abundantly clear when the suspended ANCYL president Julius Malema arrived – looking uncannily like Yahya Jammeh in his beret and aviator sunglasses – the stadium erupted in deafening cheers. Ever the populist, Zuma worked the crowd as he arrived, but all it took for the stadium to be filled with roars was for the cameras to pan in Malema’s direction. Before the programme could start, ANC chairwoman Baleka Mbete had to threaten a small, but vocal section of the audience who would not stop chanting Malema’s name, with ejection from the venue.

Walking towards my car later that afternoon, my attention was attracted to a tavern by a loud shushing sound. Glancing in, I saw the unmistakable shower-head sign being made by a large group of young ANC followers – the shhh sound was presumably that of the water coming out of the spout.

The ANC may be 100 years old, but even today it battles with factionalism and party discipline. You’ll remember that Malema had his party membership suspended after a slew of disciplinary infractions. He was given a seat on the stage alongside other national executive committee members on Sunday, suggesting that the ANC was of the view that his suspension would only kick in after the appeals process had been exhausted.

Zuma himself admitted to the party’s problems in his address. “We will take urgent and practical steps to restore the core values, stamp out factionalism and promote political discipline,” he said.

The residents of Bloemfontein were mostly anonymous, and the few that had thought ahead used the opportunity to bolster the bottom line. Shops and pubs overflowed. In the townships surrounding Bloemfontein, crowds gathered to listen to exhortations by either Malema or Zuma.

Speaking before the conference started, ANC NEC member Lindiwe Sisulu admitted to the party’s main challenges: “In some areas we have not moved as fast as we should, like corruption. We didn’t know being in government would be as ­challenging as it is also from ­being a liberation movement and suddenly you’ve got all this money as a ruling party, is a big step.”

The weekend displayed the ANC’s prevailing attitude – it celebrated its past with abandon and views its future with some trepidation. It is very clear with which it is more comfortable.

The ANC still has policy and elective conferences this year, so what was said on the weekend of 8 January  will probably carry less historic import, but it was an opportunity for serious partying before the real fighting begins. DM Grant Us This Day

PwC and Nkonki: The auditors who clipped SAA’s wings

Pondering Polls: The 2021 local elections might still be the least worst outcome in a time of no good options

The ANC must go: This is not the South Africa we fought and went to prison for