Stephen Hawking at 70: spirit of human, mind of God

Stephen Hawking at 70: spirit of human, mind of God 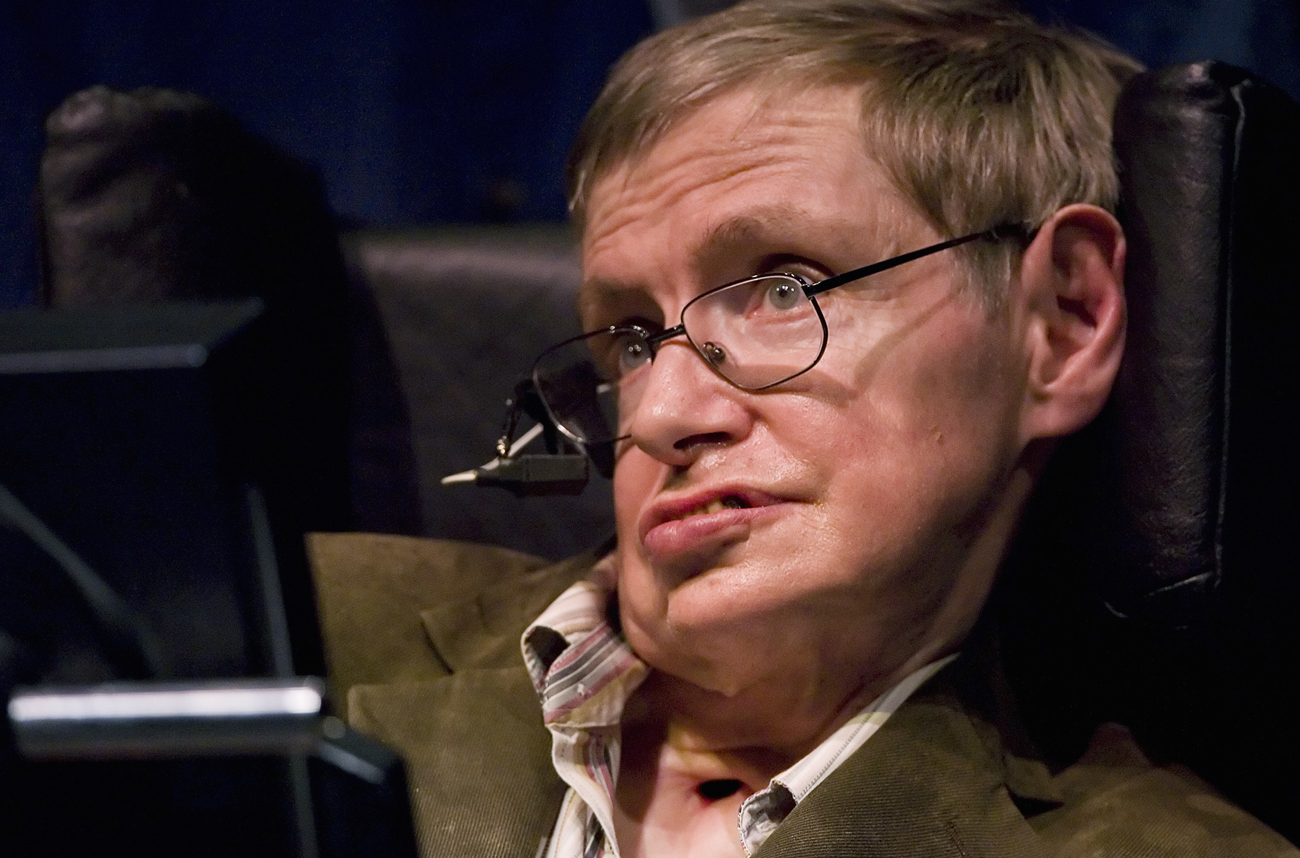 On Sunday, 8 January, a birthday celebration at the University of Cambridge unfolded without the famous celebrant. He was too ill to attend. The wheelchair-bound theoretical physicist and cosmologist Stephen Hawking, despite almost half a century of infirmity, just turned 70. Where would we be without him? By RICHARD POPLAK.

When it comes to Stephen Hawking, there is an image that has stayed with me since it first wafted into my mind. Five years ago, I read that Virgin billionaire Richard Branson had offered the astrophysicist a berth on his commercial space thingee, Virgin Galactic. In order to prepare for the trip, and as a 65th birthday gift to himself, Hawking took a spin in the so-called “Vomit Comet” – the zero-gravity simulator that astronauts use to familiarise themselves with the gravitational deprivations of spaceflight.

I imagine him floating, moving without the use of his wheelchair for the first time in decades, fully at peace for a few moments. Of course, I know nothing of Hawking’s state of mind, but like any futurist – and he is indeed an amateur futurist – he has been obsessed with space flight and extra-terrestrial life for much of his life. Trying to construct the consciousness of any genius, yet alone a genius imprisoned for life in his own body, is a losing game. Yet, in this case, I give myself a pass. I imagine Stephen Hawking as blissfully, totally happy.

At 70, Stephen Hawking is an anomaly. He was, as a 21-year-old Oxford student, diagnosed with amyotrophic lateral sclerosis, or ALS. One day he was coxing a row team; the next he was having trouble getting out of bed. The symptoms came on as they usually do – a tumble down a staircase, the steady loss of motor function. The disease is usually a death sentence. In Hawking’s case, he was given no more than three years to live. That he has lasted almost a half-century longer than that prognosis is a triumph in itself, but it’s what he has done with that time that is so thoroughly impressive.

Time is, of course, the astrophysicist’s plaything, and few humans have had their way with the dials of the cosmic clock as have Hawking. He is nowhere in the vicinity of retirement, chairing as he does the Perimeter Institute for Theoretical Physics in Waterloo, Canada, along with his duties as director of research at the Centre for Theoretical Cosmology in the department of applied mathematics and theoretical physics at the University of Cambridge. But consider his signature popular work: A Brief History of Time. No book has spent longer on the Sunday Times bestseller list – a full 237 weeks – and it has sold more than 10-million copies. It is very often the one science book the layperson has on her bookshelf, the one book she pages through, pondering lines like this one: “The whole history of science has been the gradual realisation that events do not happen in an arbitrary manner, but that they reflect a certain underlying order, which may or may not be divinely inspired.”

When the book was published in 1988, Stephen Hawking offered science that did not require readers to abandon their gods; it reassured us that there was, indeed, some sentient logic behind all the chaos, and that there was indeed a means of deciphering it. Hawking went further, asserting:

“If we do discover a complete theory, it should in time be understandable in broad principle by everyone, not just a few scientists. Then we shall all, philosophers, scientists, and just ordinary people, be able to take part in the discussion of the question of why it is that we and the universe exist. If we find the answer to that, it would be the ultimate triumph of human reason – for then we would know the mind of God.”

The mind of God. This is what Hawking was after, locked inside his body, wired to a synthesised voicebox that made him sound like intelligence itself. There has never been a more compelling rendering of Genius – pure erudition, unmitigated knowledge, stripped from the flesh. Stephen Hawking was, to his average reader, a construct like no other. He represented a bridge to complete understanding – to reconciling the bloodbath between religion and science, and to answering the ultimate question: Why the hell are we here?

He has, since the publication of A Brief History of Time, gone to some lengths to disavow his working relationship with God, or derivations thereof. He has declared himself an atheist. Heaven is a fiction, he recently stated, “a fairy story for people afraid of the dark”. He never presented a heaven, but his popular writing at least suggests the possibility one, if only by not explicitly discounting it. “I regard the brain as a computer that will stop working when the components fail,” he told the Guardian recently. “There is no heaven or afterlife for broken down computers. (Tell that to Siri, the Apple voice control app, and watch her go all HAL on humanity.)

Is this a contradiction? Not really. Indeed, there is nothing simple about Stephen Hawking, certainly not his hardcore astrophysics, which are practically indecipherable without the sort of metaphor he perfected in his popular works; and not his outlook, which is complicated by his disease, and the fact that he has lived a full and productive life despite it. (He has been married thrice, and has three children.)

One wonders if Hawking will get a chance to take his trip in Virgin Galactic; one wonders if he will live to see proof of his avowals that there must be extra-terrestrial life. One wonders if his legacy, and that of science in general, will lead to greater understanding, or sew the seeds of humanity’s destruction, as he has suggested it might. I cling to the image of him floating in zero gravity: Hawking Unbound. For as he put it in his book Grand Design, the existence of gravity proves that the world “can and will create itself from nothing. Spontaneous creation is the reason why there is something rather than nothing, why the universe exists, why we exist.”

And nothing proves the existence of gravity more than the absence thereof. DM