Is Nigeria on the brink of civil war?

Is Nigeria on the brink of civil war? 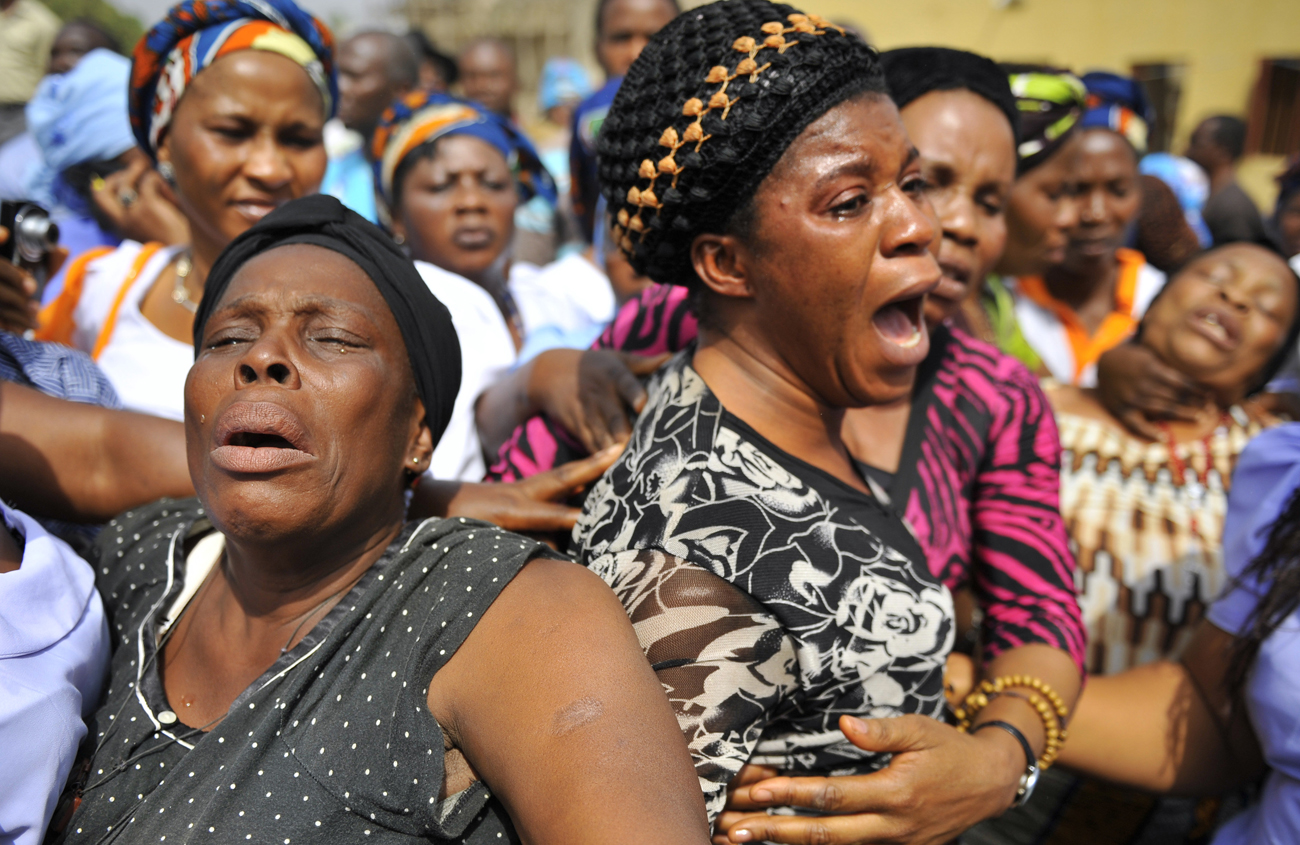 Nigeria’s major Christian leaders determinedly paint the Boko Haram violence – worsening by the day – as religious warfare, but the situation is a lot more complicated than that. If the Christian leaders don’t tone down their rhetoric, their dire predictions of civil war risk becoming a self-fulfilling prophecy. By SIMON ALLISON.

Last Sunday, a spokesman for Boko Haram issued an ultimatum to Christians living in Nigeria’s predominantly Muslim north: Get out within three days, or be killed. Some Christians fled, packing their bags, closing their shops and hurrying to friendlier territory, either to wait out the troubles or restart their lives. Unprepared to give up their homes and livelihoods, most stayed reassured by the police who told them, “We want to assure all Nigerians that they are safe wherever they may be residing”.

Unfortunately but not unexpectedly, the police were wrong. The ultimatum expired and Boko Haram made good on its threat. Since Thursday last week, dozens of Christians have been killed in shootings attributed to the Islamist militant group. On Thursday evening, six worshippers were killed in a church in Gombe when gunmen stormed in and opened fire on the congregation. Two similar incidents in Yola and Mubi on Friday claimed the lives of 11 and 17 people respectively. In Potiskum on Friday night, running battles between gunmen and police stretched into Saturday morning, forcing hundreds to flee their homes; concerned not only about the Boko Haram threat, but also wanting to avoid being around for the often indiscriminate military response. Also on Saturday, another attack in Mubi killed three more people.

Boko Haram appears to operate with impunity in northern Nigeria, despite the efforts of the Nigerian authorities to keep them in check. Threats and bluster from the central government have not worked, sending in the military has not worked, imposing curfews has not worked and declaring a state of emergency in the affected area has not worked.

President Goodluck Jonathan’s administration seems to be at a loss, uncertain of how to deal with the security threat that, left unchecked, might derail the whole country.

This danger is exacerbated by the tub-thumping response of some of Nigeria’s Christian organisations who seem unable or unwilling to turn the other cheek. Ayo Oritsejafor, leader of the Christian Association of Nigeria and “head of Nigeria’s Christians” (according to some media reports) led the war talk. Reading a statement prepared after a meeting, he claimed “the pattern of these killings does suggest to us a systematic ethnic and religious cleansing”, and “we are reminded by the occurrences of these killings of the genesis of the civil war that took place here in Nigeria”. Ominously, he concluded: “We have the legitimate right to defend ourselves and…we will do whatever it takes.”

On an emotional level, it’s hard to argue with Oritsejafor’s comments. When violence is framed in such an explicitly religious context, it’s reasonable to feel persecuted, and it is natural to want to defend yourself and your community. But here’s the problem: While the killings are often described in simple religious and ethnic terms, as Muslims against Christians and northerners against southerners, the reality is a lot more complicated; and, all too often, has nothing to do with religion.

The truth of this can be seen by looking at Boko Haram itself. They’re often described as a “shadowy” organisation about which no one really knows the size, who leads it or what their exact goals are besides a pronounced anti-western bias (the name means “western education is forbidden”) and a desire to impose Sharia law over Nigeria. But even Boko Haram’s existence is questioned. As The New York Times explained: “…there is no proof that a well-organized, ideologically coherent terrorist group called Boko Haram even exists today. Evidence suggests instead that, while the original core of the group remains active, criminal gangs have adopted the name Boko Haram to claim responsibility for attacks when it suits them.” This might explain the high number of Boko Haram attacks linked to bank robberies.

And it’s not just criminal gang. Politicians too find Boko Haram useful at times. In November it was revealed that at least two members of President Goodluck Jonathan’s ruling party were involved in financing the group, or elements of it. They felt sidelined by Jonathan’s unexpected rise to power and were looking to disrupt his government. Mission accomplished, although it might be too late for them to benefit. An even grander conspiracy theory suggests Nigeria’s top generals are talking up the Boko Haram threat to keep state funding flowing their way. Spending on the armed forces accounts for some 25% of the budget.

Even focussing on the original core of the group, the genuinely fundamentalist bit, it’s not at all clear that violence against Christians is its primary aim. The New York Times again: “…it was not until 2009 that Boko Haram turned to violence, especially after its leader, a young Muslim cleric named Mohammed Yusuf, was killed while in police custody. Video footage of Yusuf’s interrogation soon went viral, but no one was tried and punished for the crime. Seeking revenge, Boko Haram targeted the police, the military and local politicians — all of them Muslims.”

It’s clear that the simple narrative of Muslim violence against Christians is hopelessly inadequate to describe what is going on in northern Nigeria. It would be naïve to argue that religious tensions play no part, but it is equally naïve to ignore other factors in play such as crime, power and greed. Not to mention the poverty and unemployment which fuel much of the unrest. This is why the rhetoric espoused by the “head of Nigeria’s Christians” is so dangerous, pretending it is only about religion risks making it only about religion. The louder the talk of civil war grows, the more likely it is to happen. DM Photo: Women weep over their loved ones who died in the Christmas day bomb explosion at St. Theresa’s Catholic church in Madalla, just outside the capital Abuja December 31, 2011. Nigerian President Goodluck Jonathan visited the church on Saturday and vowed to “crush the terrorists” who set off a series of bombs across Nigeria on Christmas Day, killing at least 37 people. REUTERS/Afolabi Sotunde