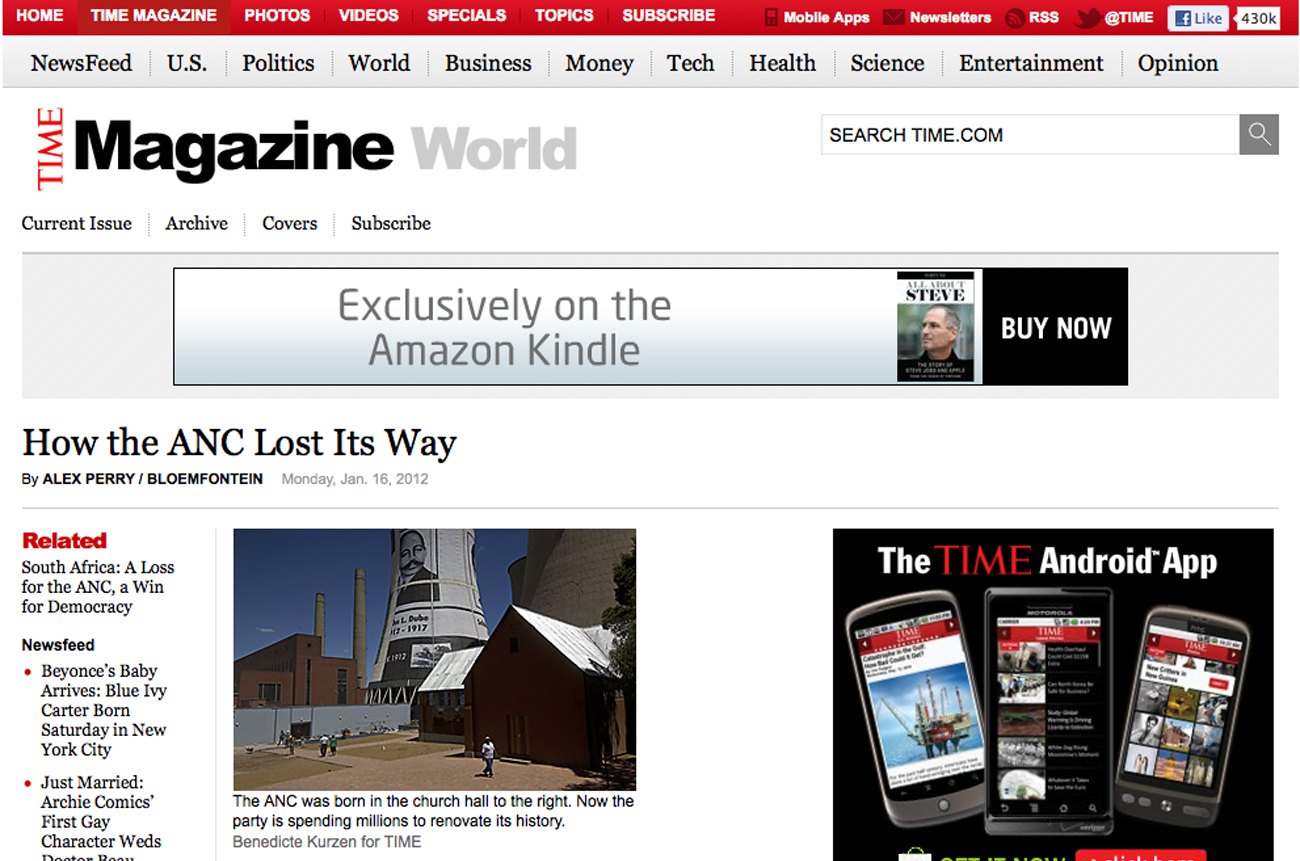 If the ANC was hoping that the lavish sums it spent on centenary celebrations this weekend would buy it some favourable global PR, the party may be disappointed. REBECCA DAVIS took a look at the international coverage of the centenary, and found it distinctly mixed.

While the ANC’s birthday party dominated headlines at home, it was also a major feature for many international news outlets. The global media were generally scrupulous about detailing the ANC’s history and achievements, but there were some harsh critiques available to overseas readers this weekend. Two notable pieces from this perspective were produced by TIME and the UK’s Sunday Telegraph.

TIME’s article – the major feature on its website on Sunday – set the tone through its headline: “How the ANC Lost Its Way”. Pulling no punches, journalist Alex Perry cited “the ANC’s dramatic loss of moral authority” and suggested that “[Mandela’s party] has become synonymous with failure – and not coincidentally, arrogance, infighting and corruption.” President Jacob Zuma’s successes were given an airing, however, including his recent decisive action on corrupt officials and the triumph of the World Cup. Nonetheless, Perry proceeded to point to the unfeasibility of the National Plan, suggested that “[Zuma’s] purges of officials are less about corruption or ineptness than political vendettas”, and mentioned Zuma’s own corruption charges. Ultimately, TIME suggested, the centenary celebrations were designed to “hammer home how much black South Africans owe the party”, and the fact could not be disguised that “corruption and mythmaking have combined for the ANC’s birthday party”. The magazine went so far as to raise the spectre of the Arab Spring as a cautionary tale for an overconfident party.

The Sunday Telegraph sounded a similar note, dwelling at some length on the elite trappings of the weekend, and in particular the incongruity of hosting a golf day to celebrate the founding of a socialist movement. “Top-of-the-range Mercedes, Rolls Royces and Range Rovers, most with Johannesburg plates and some with chauffeurs wilting in the 35C heat, jostled for space in the car park while their owners jostled for top-ups in the clubhouse,” the report read. The paper did note a number of post-1994 achievements – “the ANC has presided over steady economic growth, a drop in violent crime and the provision of basic homes and services to some” – but also focused on the party’s growing tendency towards stifling dissent. They pointed to the fact that Zuma has banned the tradition of alliance partners sharing the stage with him during the centenary celebration in order to “avoid embarrassing outbursts”, and mentioned two notable figures who didn’t crack the nod to the celebrations: Amina Cachalia and Ronnie Kasrils. The latter told the Sunday Telegraph: “I wasn’t invited and nor were many of my comrades from the struggle” and described the current ANC as “narrow, prejudiced, hypocritical, bitter, and a pale shadow of the leaderships since 1912”.

The Guardian, an ANC ally during the years of the liberation struggle, ran a sombre Friday editorial headlined “ANC’s unhappy birthday”, but differed from TIME and the Sunday Telegraph in seeing the party’s status quo as cause for change rather than a source of cynicism. Drawing unflattering comparisons between the current ANC top brass and the original struggle icons, the paper suggested that “today’s archetypal ANC official is the antithesis of Walter Sisulu, and since that moment of triumph the ANC has been a study in degeneration.” The editorial’s tone verged on hyperbole, calling the party’s recent history a “lesson in human frailty” which amounts to “high tragedy”, but ended on a clarion call for action: “There is still another chapter to be written, and it is high time for the ANC’s many remaining idealists to start writing it”.

Foreign correspondents have a nasty habit of finding locals to talk to, and all the ANC supporters seemed to have been in hiding when the journalists ventured forth with their notebooks. TIME found a Bloemfontein local to tell them “The ANC is full of corruption”. The Sunday Telegraph, too, got their sound bite of dissatisfaction from a 24-year-old car-washer: “This isn’t really a celebration for us. It’s for them. What have we got to celebrate?”

It’s also always interesting to see which South African “political analysts” the overseas media deem worthy of seeking wisdom from on occasions such as this. The ubiquitous Stephen Friedman was a popular choice. The Sunday Telegraph chose to go with Andile Mngxitama, a safe bet for giving good quote (his take: “The ANC can celebrate all it wants to – my problem is that it is feeding people a diet of history to avoid having to account of its inability to serve society now”). The Irish Times turned to Idasa’s Joe Mavuso, who sounded an upbeat note, saying that the ANC’s achievements were “worth celebrating when you see the reconciliation that has taken place”. They balanced this, however, with quotes from Max du Preez’s blog to the effect that “The ANC is, in fact, dead. It is a political party led by charlatans and power-drunk autocrats”. Bloomberg called up UCT’s Zwelethu Jolobe, who told them that “the ANC has got no competition” – which Helen Zille won’t be too pleased about.

The BBC, Voice of America and most of the news-wire agencies carried largely neutral accounts, itemising the weekend’s agenda and those attending. Canada’s Globe & Mail took a wider view, seizing the occasion to issue a report card to the ANC on its performance since 1994. They issued their highest score – A-minus – for racial reconciliation, and the lowest – D – for crime and corruption.

Sky News Australia simply could not get enough of the traditional aspects of the celebration, seemingly so keen to mention the bull sacrifice that their resulting headline represented a grammar sacrifice: “Animal sacrifice ANC centenary”. Eight full paragraphs were devoted to detailing the “rituals to communicate with the ancestors”, titillating their readers with lyrical description like the following: “Zuma symbolically thrust at the bull with a spear, amid whisps of fragrant smoke from a burning herb, inside a makeshift pen of thorntree branches and chicken wire, before it was slaughtered”.

Still, it wasn’t all bad. The BBC’s Africa correspondent, Andrew Harding, penned a more personal piece, focusing on the thorny issue of the golf tournament, and found himself siding with Jimmy Manyi on the topic: “The tournament may not be public relations coup, but on a weekend steeped in history, there is a certain irony to be enjoyed from the sight of ANC leaders – branded terrorists not that long ago – teeing off at a golf course once reserved for white players and their black caddies”.

And Al-Jazeera ran an opinion piece by activist-filmmaker Danny Schechter, who revealed himself to be chuffed to bits to have been invited to the celebrations and – even more thrillingly – addressed as “Comrade” on the invitation. Perhaps that’s the reason for the muted enthusiasm from other news outlets: bitterness at not having been invited.

But of course, the ANC’s centenary celebrations were not to impress the rest of the world. They were, in essence, a costly form of electioneering. As such, what an English or US newspaper thinks of the birthday party will likely not cost the ANC top brass much sleep. DM