Will the ANC learn from Nigeria or just party on?

Will the ANC learn from Nigeria or just party on? 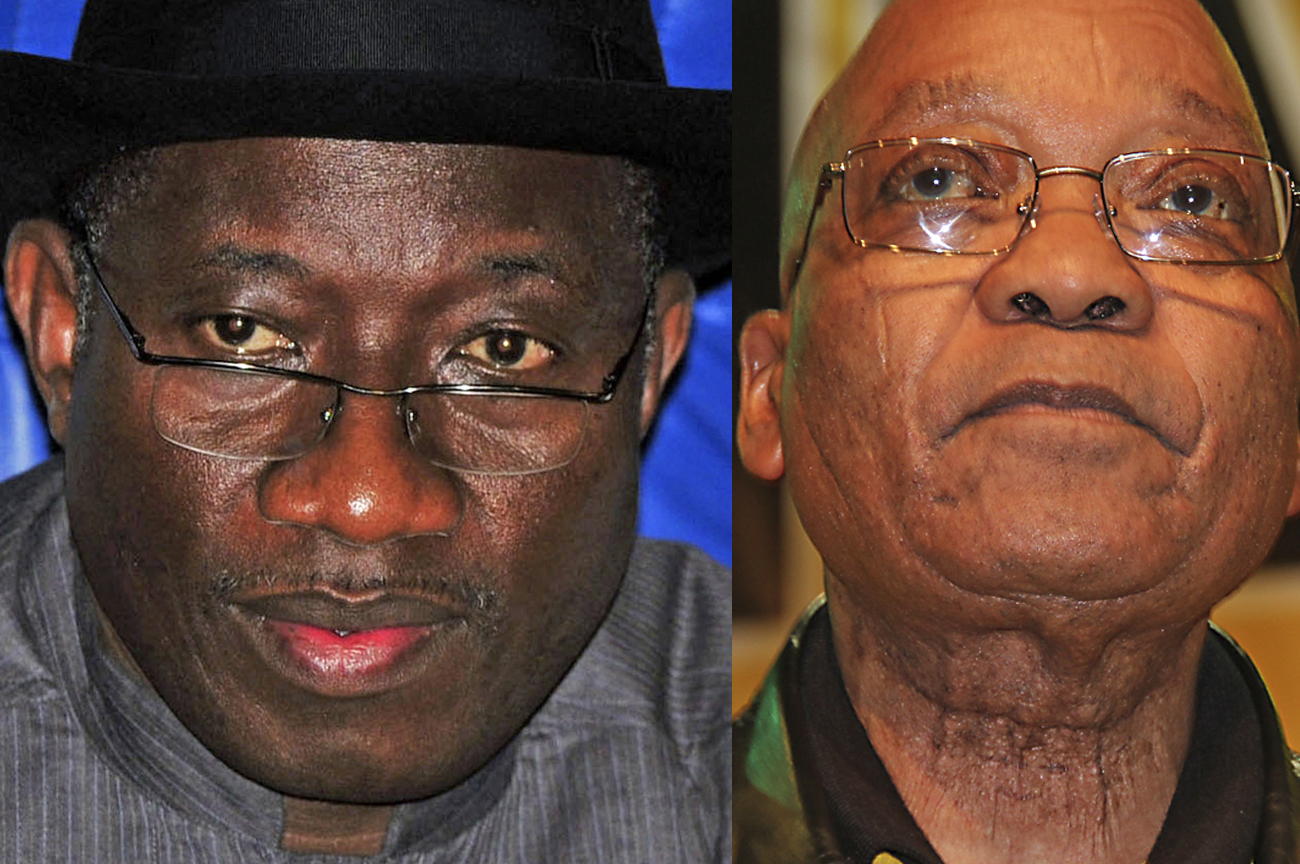 Jacob Zuma will be busy this weekend, but if he can drag himself away from the party, he should have a chat with one of his guests. Goodluck Jonathan, Nigeria’s pimp-hatted president, has flown down to join in the festivities and he might be able to give Zuma – and any ambitious cadres – a few lessons on how a dominant ruling party can end up ruining the state. By SIMON ALLISON.

As well as all the celebrities, citizens and loyal comrades converging in Mangaung this weekend for the ANC’s big birthday bash, there are 46 current and former heads of state, 47 if you count Zuma (although not for a moment are we suggesting he is not also a loyal comrade). These top tablers have left behind whatever important business such as running countries, to pay homage to the power they know is really running South Africa: the ANC.

In the midst of the celebrating, singing and the interminable speeches, there is one particular visiting president any ANC member concerned with the party’s future should try to speak to – Goodluck Jonathan from Nigeria. He’ll be easy to spot. He’s the one with the black pimp hat. You’ll know it when you see it.

The reason he’s so important is that, in addition to his presidential duties, Jonathan is the leader of a political party that bears a striking resemblance to the ANC. It’s by far the alpha-party in Nigeria, and is the only major political party with support across all geographic and ethnic divides. It gets votes in the north and the south; from Muslims, Christians and animists and most of Nigeria’s major tribes. Other parties tend to represent a specific demographic, rather like the Democratic Alliance (as much as they might argue the point) or the Inkatha Freedom Party here.

Some of these Nigerian demographics are rather large – they should be, given the population of nearly 160-million – meaning that the Peoples Democratic Party doesn’t enjoy quite the same electoral superiority as the ANC, but its dominance is indisputable. Of Nigeria’s four democratic elections since 1999, the beginning of the current democratic era, the PDP has won them all.

Political power in Nigeria, in other words, comes first from control of the party. PDP conferences choose presidents and elections are just a rather expensive rubber-stamping exercise. In theory, this shouldn’t be a problem. No one, except the embittered opposition, disputes that elections are rigged, but not rigged “enough” to affect the results in a meaningful way. And in this style of democracy, people get what they vote for and they keep voting for the PDP.

Historical factors, both colonial and modern, have created a polity deeply divided along ethnic, religious and geographic lines. It is almost impossible for a party to rise above its origins and so far the PDP is the only one to have done so. Hence its electoral success. Nigerians don’t have a viable choice. The PDP’s success is a testament to the genius of its founding fathers, in particular Olusegun Obasanjo, who created a national rather than parochial party. They did this in a rather unusual way. Instead of debunking the notion that a specific regional or religious bias influenced governance, they embraced it. The solution was to make sure that this bias was equally shared, by creating an unspoken, undocumented, nudge-nudge-wink-wink agreement to rotate the leadership between a Christian southerner and a Muslim northerner. That way no one is left out. For eight years at a time, both halves of the country get to feel like they’re in control and reap the benefits which stem from that.

But then Jonathan came along and royally messed up the system. It wasn’t all his fault. He was the Christian southerner deputy to president Umaru Yar Adua. Yar Adua was Obasanjo’s successor, and a Muslim northerner taking his rightful turn. But then Yar Adua died, an event unforeseen in secret agreements, and Jonathan assumed power. And instead of relinquishing it in the next election, as many thought he should have done, he held on tight, effectively jumping the queue. His party, forced to remain together by the simple fact that none of them would be in power were they to split, was torn between those who supported his leadership and those who didn’t. The consequences have been bloody – and potentially devastating for the country.

In November, two national senators and prominent PDP members were fingered by the captured spokesman of Islamist militant group, Boko Haram. Their crime? Funding Boko Haram’s sustained campaign of violence which has killed hundreds since Jonathan was elected president. Their motivation? To get back at Jonathan, and make sure the country was too hot for him to handle. To punish him for his transgressions as party leader. To pave the way for their own narrow ambitions.

Ultimately, the good of the country comes a distant second to party politics and the country suffers. Not just as a result of the bombings. So far, Jonathan has proven to be a decent president, particularly on the economic side of things. He’s appointed a very good team around him and they’re making progress – this week’s controversial scrapping of fuel subsidies being an example of him making difficult decisions that needed to be made. But his job of actually governing the country is made exponentially more difficult by his lack of internal support as he’s having to fight those battles before anything else.

This is the lesson ANC leaders – current and future – need to learn from Nigeria. In a state where one party dominates so completely, the internal affairs of that party are of national importance. And if the party is divided, or disorganised, or corrupt, these traits will inevitably spread into government as a whole and then into the country. If one leader tramples over another on his way to power, that acrimony can have a real impact. In Nigeria, that meant deaths, lots of them. Being a senior figure in the ANC is an awesome responsibility, with the potential to influence the lives of millions, for better or for worse. Now is a good time for the ANC to look towards Nigeria, and decide what kind of ruling party they really want to be. DM