Stop presses: Why Rupert Murdoch may have joined Twitte...

Stop presses: Why Rupert Murdoch may have joined Twitter 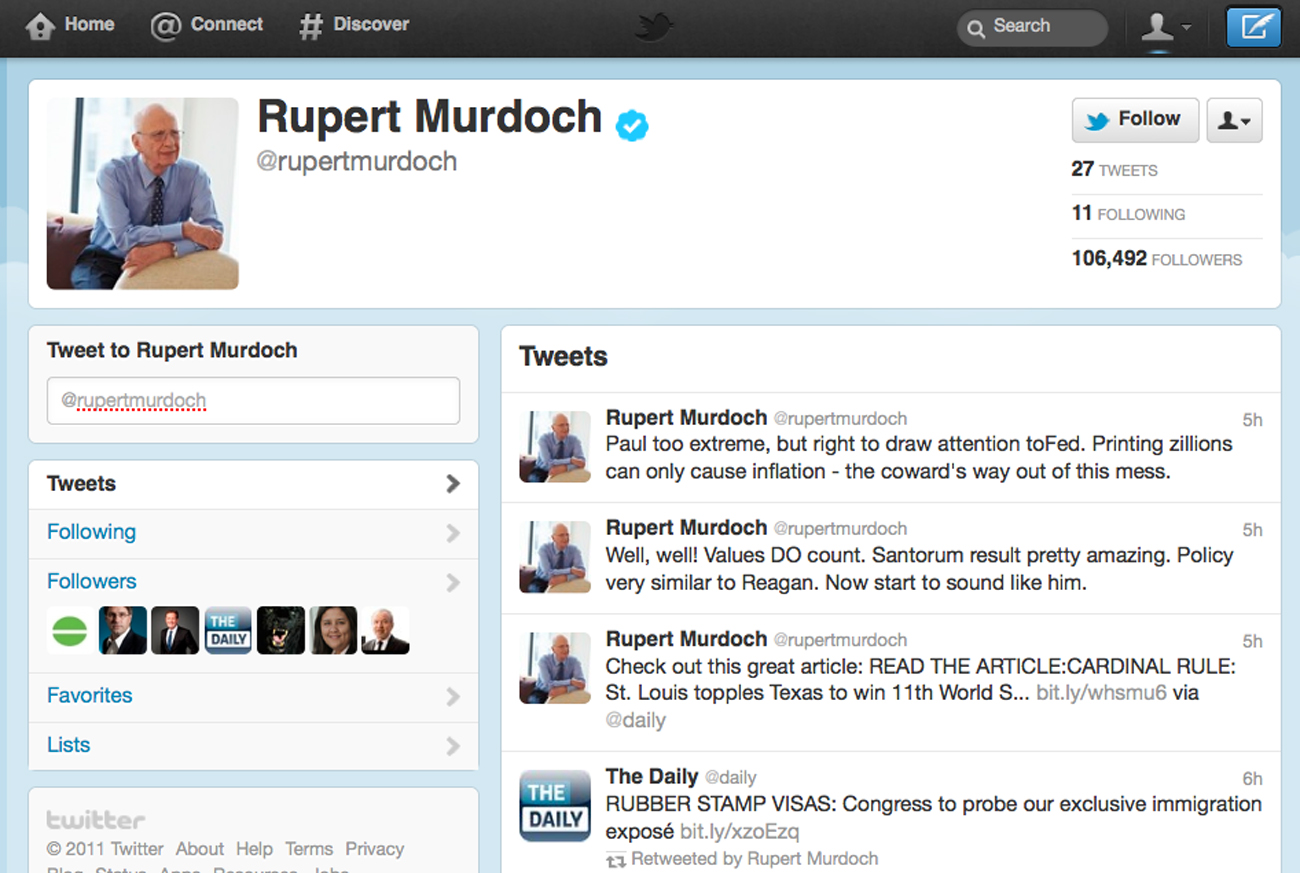 Who knows what happens to a media baron when he gets humiliated by the very government he helped shepherd into power. Does he lie awake at night mumbling to himself? Does he hear voices and see dead people? Does he discover Twitter and decide it’s the perfect vehicle to take his madness to the masses? Or is the truth of his presence on one of the world’s most successful social networks more sinister than that? By KEVIN BLOOM.

It’s going to be a fun year, innit? When Sir Ahmed Salman Rushdie—winner of the Booker Prize in 1981 for Midnight’s Children, recipient of a fatwah from the Ayatollah Ruhollah Khomeini in 1989 for The Satanic Verses, and conferee of a Knight Bachelor by Queen Elizabeth II in 2007 for “services to literature”—informs his 166,645 followers on Twitter that the social media giant “verified” Mrs Murdoch while News International deemed her a fake, you just know 2012 is going to rock. Especially when, an hour later, the same Commandeur in the Ordre des Arts et des Lettres of France and member of the American Academy of Arts and Letters follows up with this tweet: “Maybe Mrs Murdoch was real but changed mind abt tweeting & had NewsInt say she was fake. Maybe @rupertmurdoch is a fake trying to be real.” Like, who really needs a literary giant to actually write his words out in full anymore? The idea is just so 2011.

And what’s also so 2011—or, at least, so pre-July 2011—is the idea that Rupert Murdoch is a force to be reckoned with. As of late June last year, when media barons were media barons and men were playmobile figures for media barons to decapitate, Murdoch stood in his rightful place as one of the most reviled moguls on Earth. Journalists hated him for turning the profession into a circus sideshow, intellectuals hated him for dumbing down the planet, American Democrats hated him for starting Fox News, the IRS hated him for dodging hundreds of millions of dollars in taxes, Australians hated him for becoming an American, and his ex-wives hated him for regularly trading them in for newer models.

Then came that thing with Rebekah Brooks and Andy Coulson and the illegal phone tapping, and the cream pie that was mashed in the media baron’s face during the public inquisition. For the rest of the year, Murdoch laid low, did his best to stem the bleeding, and raked in his still humongous corporate profits. But for some reason, on the last day of 2011, he decided to join Twitter.

The big question, of course: what could that reason be? One theory being floated around is that Rupert’s mental faculties have not emerged from his annus horribilis unscathed, that his brain is now about as addled as a cut of raw prime rib in a chihuahua cage. Backing up this theory are a few examples from his freshman career as a Twitterer, which, as of this writing, numbers 24 tweets (disclaimer: all grammar and punctuation errors are the property of @rupertmurdoch, and have nothing to do with the subbing department, such as it is, at the Daily Maverick).

For instance, the debut post on 31 December: “Have just. Read The Rational Optimist. Great book.” Right. Like you. Have every rational. Reason to be optimistic. Or this one on 1 January: “Vacations great time for thinking. St Barth’s too many people. Thoughts best kept private around here. Like London!” Haha, Rupert, we get it…you should’ve said nothing to the British government, stuck with plausible deniability. Or this later on 1 January: “Happy 2012. May itbe better than all experts predict. Has to be! Must change everything to create jobs for all, especiallyyoung.” Thenext president oftheunitedtstates?

Still, let’s say Rupert hasn’t lost his marbles. Let’s say there’s a very clever strategy behind all of this. As Hadley Freeman commented in the Guardian, that august newspaper that did so much to bring our media baron to his knees, on Tuesday 3 January: “Some might view Murdoch’s arrival on Twitter with an emotion other than glee. Those on Twitter, for example, might feel like they’ve been having a perfectly good time at a party only for that embarrassing old dude from next door to crash the event and start rubbing his hands Kramer-style, while he takes over DJ duties and cranks up the Toploader. Those of a more business-oriented mind might view this development as a further dismaying sign that Murdoch is to buy Twitter, as portended last month by the news that Saudi billionaire Prince Alwaleed bin Talal has bought a 3.75% stake in Twitter. Alwaleed, incidentally, happens to be the second largest shareholder in News International after a certain gentleman who we now must refer to as @rupertmurdoch. 2012: the year Twitter literally becomes the new Myspace.”

Perish the thought. Much easier to believe that Rupert—who, unlike his wife, has had his account verified by both Twitter and News International—wants to be there for the literary company. If Rushdie can use the platform as an excuse to disembowel the English language, why can’t the owner of The Sun and the New York Post? DM