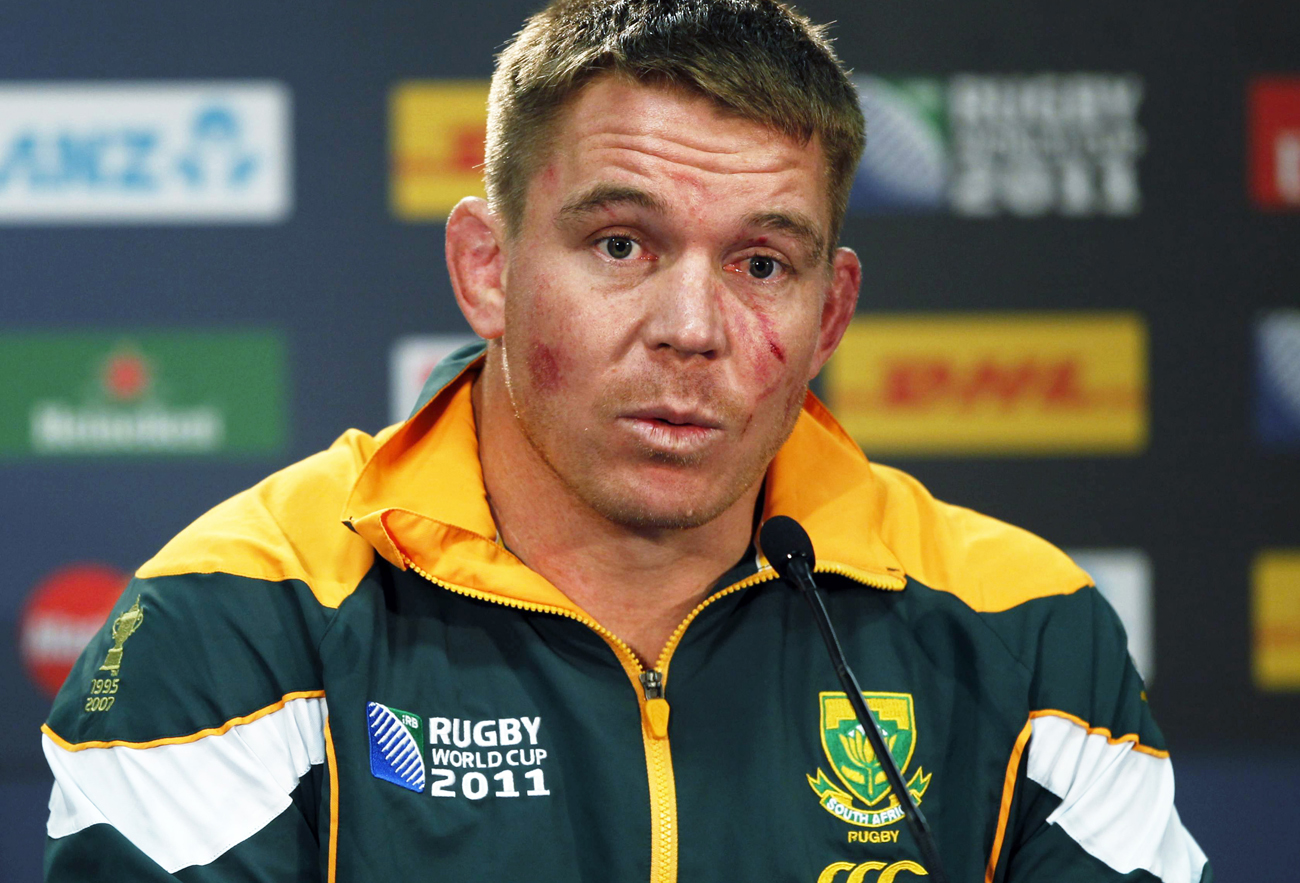 Looking back on an year of two world cups, the hangover of another and excluding some splashes in the swimming pool, 2011 wasn’t very kind to South Africa. STYLI CHARALAMBOUS struggles to digest a year that began with so much sporting promise, but ended in heartburn.

This year reminded me so much of 1999. It began with the eager anticipation of my two favourite World Cups, with both the Proteas and Springboks holding better-than-good chances of victory. And just as in ’99, the anger and frustration that spewed forth after South Africa’s ungracious exits were once again dished out in healthy portions to long-suffering cricket and rugby fans.

Back then, I remember struggling through two sets of honours exams during the ’99 edition of those World Cups, with five-minute study breaks somehow evolving into entire afternoon sessions, or longer. With the university and ICC conspiring to fail as many of my classmates, I was fortunate enough to have the dual remedies of student night specials and taxation law to serve as my anaesthesia for the Edgbaston debacle that still continues to haunt me and many other scarred Protea fans.

We now have an inkling of the level of match fixing that was rife in that particular World Cup, and yet it does nothing to numb the pain of that sporting tragedy. In ’99, the main protagonists of our sorrow were the Australians, a crooked sportsman (Hansie Cronje) and the wobbliest, most heartbreaking drop-goal in the history of Bok rugby.

So, not much has changed then. In 2011 the Australians again featured as the villains-in-chief of the revised edition of this sporting tale, ably assisted by a crooked sportsman (insert a New Zealand referee’s name here) and the most heartbreaking drop-goal in Bok rugby, (the one Pat Lambie missed in the quarterfinal).

It’s quite a call to accuse (insert a New Zealand referee’s name here) of being crooked, but it’s the only rational conclusion I can reach, after what now appears to be a manufactured World Cup victory for New Zealand. From the furore that surrounded the voting process that awarded them the hosting rights in 2005, to the most average of referees appointed to run the sport’s officials, to THAT quarterfinal match. It all reeks of collusion and deception of Limpopo-esque proportions. And, in case you think I’ve finally lost my marbles, here is a simple litmus test you can do at a watering hole next time you’re abroad. Ask any neutral cricket and rugby fan to watch the Edgbaston cricket semi-final and the Auckland quarterfinal. Then ask them which match they think was more likely to have been rigged.

South Africa were the best team at this year’s Rugby World Cup, and if we weren’t outright denied the title by that  (insert expletive and New Zealand referee’s name here), we were certainly denied a fair shot at it.

Unfortunately, the same can’t be said for their cricketing cousins who went in search of an elusive first World Cup trophy, and some much-needed redemption, in India, Sri-Lanka and Bangladesh. Graeme Smith and his men, as most Protea teams do, looked formidable in the opening rounds of the competition, even dispatching hosts and eventual winners India, by chasing down a massive 296 runs in Nagpur.

Where fans feared for our bowling contingent on the subcontinent, it was instead the batsmen that scripted another chapter of World Cup heartache, displaying as much backbone as a jellyfish. In a quarterfinal they were expected to steamroll through, the Proteas made the choker tag their own by failing to reach the modest, yet superstitious total of 222. In reaching 108/2 the Proteas were cruising, but somehow still fell 49 runs short as the South African batsmen eagerly queued to push the bright red self-destruct button in their dressing room.

Soon after the World Cup, the traditional regime change that comes with defeat of this magnitude was enforced, with the temporary coaching staff and captain dispensed with. The new recruits have yet to cover themselves in glory, allowing an under-strength Australian side to escape our shores with an ODI series win and Test series draw. Only time will tell whether the vice-like grip of capitulation under pressure can be exorcised from this team under new leadership.

But at least the Proteas had qualified for the tournament, which is more than can be said for Pitso Mosmiane and his merry band of miscalculating assistants and administrators. Few expected Bafana Bafana to progress past the first round in the 2010 Fifa Football World Cup, but the promise they showed had us all hanging on to our bright yellow Bafana shirts ready to urge the boys on to African Cup of Nations glory. Or not.

In possibly the most embarrassing scene in recent sporting memory, members of the national team jiggied their way across the park, celebrating their qualification into the Afcon Cup after claiming a goalless draw against Sierra Leone. Celebrations soon turned to commiserations when a closer (and possibly first) inspection of the rulebook saw Niger progress, despite a 3-0 final round loss to Egypt and a tournament that is now implausibly bereft of African giants Egypt and Nigeria, oh, and South Africa.

So with the “Big 3” South African sports failing to claim any worthwhile accolades on the international stage, it was left to the “smaller” sports of swimming, athletics and tennis to produce some sporting sparkle to the year. Nineteen-year-old Durbanite, Chad le Clos, emulated swimming legends Ryk Neethling and Cameron van der Burgh by winning the FINA/Arena World Cup title, a title contested over several events. Entering as a late replacement in Dubai, Le Clos admits there was an element of luck in achieving his series win. Even with the proud history of Olympic and World Championships success, swimming as a sport continues to fly somewhat under the radar, when instead we should be celebrating these successes. No doubt a lucrative jewellery endorsement deal awaits our latest swimming prodigy.

At the Athletics World Champs in South Korea, the national team again failed to deliver on an overall medal count scale, although there were some impressive individual performances. Oscar Pistorius, the fastest man on no legs, captured the imagination making it to the semi-finals of the 400m event, before running out of stream.

Pistorius was a key member in the relay team progressing to the finals, before being dropped in favour of able-bodied 400m hurdle specialist, LJ van Zyl. He did manage to leave his carbon footprint on the games winning a silver medal as a member of the 4 x 400m relay team that came in second behind the winning USA team, due to his participation in the heats. Caster Semenya, was our only individual silver medallist at the games, achieving her feat in the 800m event, although without being subjected to gender testing this time.

February saw a South African male win an ATP 500 event for only the second time in eight years. Kevin Anderson won the SA Tennis Open crown at Monte Casino against a decent field of opponents and ended the year just off his career-best ranking of 30. At 25 years old and continuing to grow in stature, it won’t be long before Anderson begins competing in the latter stages of the Grand Slams. If he doesn’t, it’s unlikely too many outside the circles of tennis will recognise the 2m-tall pro. Chanelle Scheepers won her first WTF tournament in September, pushing her to a career-high 37th in the world rankings. These victories serve as an oasis in the drought that has identified South African tennis, and hopefully both will continue to build on their best-ever years on the pro circuit.

The great thing about sport is that fans usually have pretty short memories and any single noteworthy success will have us on a temporary high yet again. 2011 was, by and large, a dismal year for us on the sporting front, but with the coming of a new year we can look forward to new challenges, new tournaments and most importantly, the mouth-watering prospect of revenge. DM