What suspension? Malema vies for election in Limpopo

What suspension? Malema vies for election in Limpopo 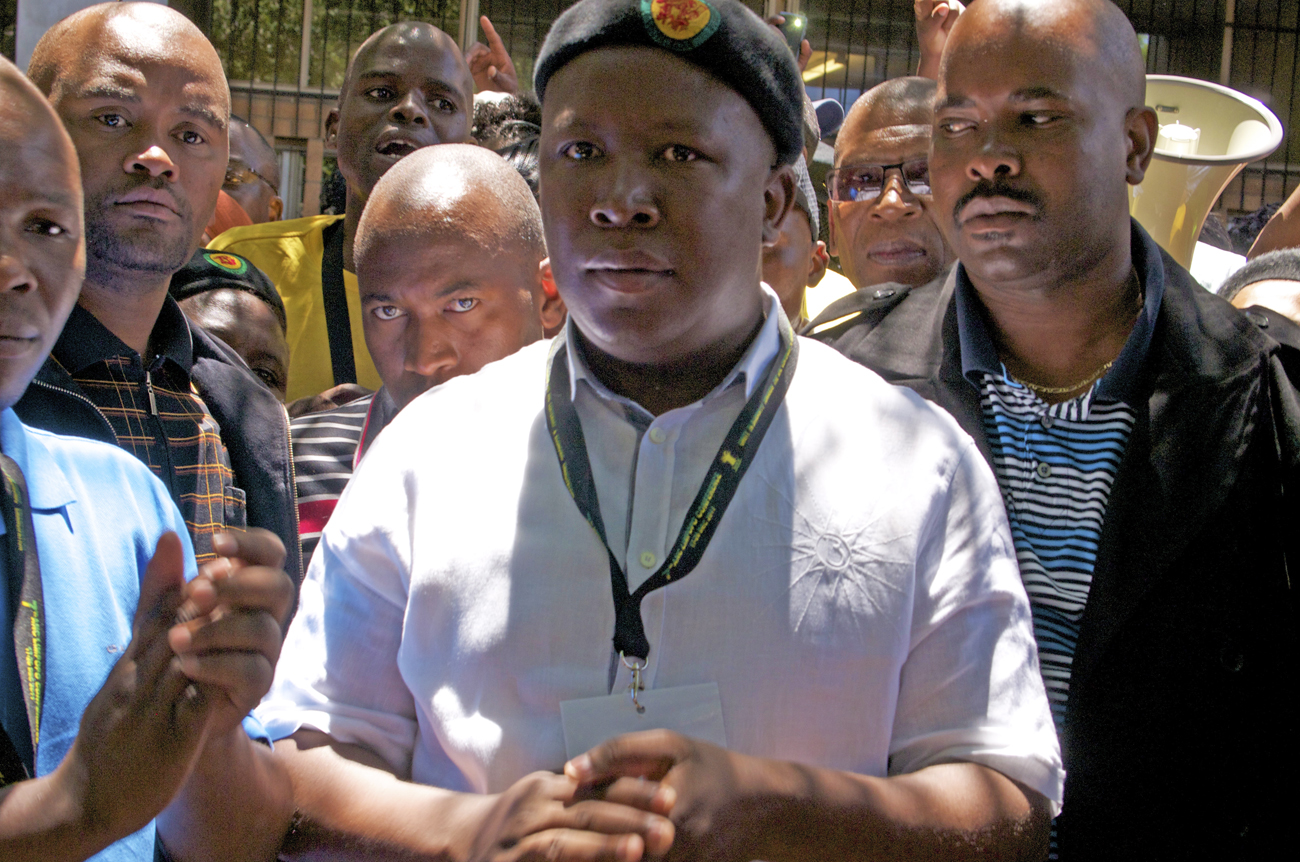 Just when we thought Julius Malema was gone, the ANC Youth League leader puts his hand up for the party in Limpopo. But in true Polokwane fashion, you’ll have to wait till tomorrow to find out what happens. BY GREG NICOLSON.

Julius Malema just doesn’t give up. Perhaps he learnt it from Jacob Zuma. Despite being suspended by the ANC disciplinary committee, Malema contested a seat on the ANC Limpopo provincial executive committee on Monday, appearing as the first name on chairman Cassel Mathale’s ticket. Newly elected secretary Soviet Lekganyane would not speculate on what role Malema would take in the province but told media that Malema remains a participating member of the party until his disciplinary hearing.

“For now he is a member of the ANC with full rights and duties protected by the ANC constitution,” said Lekganyane. Opponents say that if Malema is elected it could create a headache for the province if the appeal committee upholds the decision to suspend him for five years. But, said Lekganyane, the divisive favourite of young “economic freedom fighters” went through the correct nomination procedure. A branch put his name in the ring before the 4 December deadline and he was supported by more than 25% of the province’s almost 500 branches.

Malema has in the past denied he is ready for government. He hasn’t quite joined the Limpopo government yet, or even mentioned it, but it’s reasonable to ask why someone who is widely thought to soon be suspended would run for a provincial committee position.

The Limpopo conference is viewed as an early battle on the foothills to Mangaung mountain. Two camps look set to contest the December 2012 national elective conference. One is lining up behind incumbent President Jacob Zuma. The other is trumpeted by Malema. It wants Fikile Mbalula as secretary-general and Kaglema Motlanthe, who hasn’t voiced hopes for the presidency or openly consented to Malema’s grandstanding on his behalf, for president.

Zuma’s detractors took a piece of the puzzle this weekend when Premier Cassel Mathale, a Malema ally, retained the ANC provincial chairman position. And just to stick it to Zuma, Malema decided to go for a leadership position himself. This was after he made headline news this weekend for mocking Zuma by leading supporters in the “shower dance”.

Most Malema–Mathale supporters in Polokwane on Monday were adamant that the youth league leader remains innocent and the disciplinary hearing charges were politically motivated. “If Gwede Mantashe can go to Zimbabwe and offer assistance to Zanu-PF, why can’t Malema help opposition in Botswana?” asked a Youth league supporter. This week Malema will face the appeals committee chaired by Cyril Ramaphosa. If he fails there he can still go to the national executive committee. ANC spokesman Jackson Mthembu declined to comment on the issue, but it seems Malema is free to participate in ANC activities until the appeals are finished.

Delegates ended the day at 7.30pm on Monday night after discussing four of the eight commission reports. Results of the additional elections, of which Malema is vying for one of 20 positions, will be released on Tuesday as organisers feared delegates would skip the final day if it were  released on Monday.

After celebrating his reelection by dancing on stage in front of a crowd of delegates holding their camera-phones, Mathale attended the economic transformation commission on Sunday. The provincial conference will determine the line Limpopo pushes at the Mangaung policy conference in June and, according to many delegates, nationalisation of the mines and land reform will be important issues for Limpopo. They are disappointed with the lack of transformation, despite previous commitments by the ANC.

The conference is due to close on Tuesday after a speech by chairman Mathale. There have been rumours that Zuma will make an appearance at a rally scheduled for the afternoon. He enjoys significant support at the conference despite votes tipping in favour of his critics. Supporters of Joe Paahla, who vied with Mathale for the chairmanship, have been critical of the voting process. They claim that voting went according to attendance lists rather than a voter’s role and there were unexplained additional voters. “We can’t leave this unchallenged. If we leave this we walk away from democracy. This is the ANC. It doesn’t belong to anyone,” said one frustrated delegate. They claim to have sent a letter of dispute to ANC Mantashe, along with a signed petition. The ANC spokesman said he would wait to see the conference report before making any comments.

Provincial secretary Soviet Lekganyane, however, said that the conference had accepted credentials and the elections were free and fair. DM