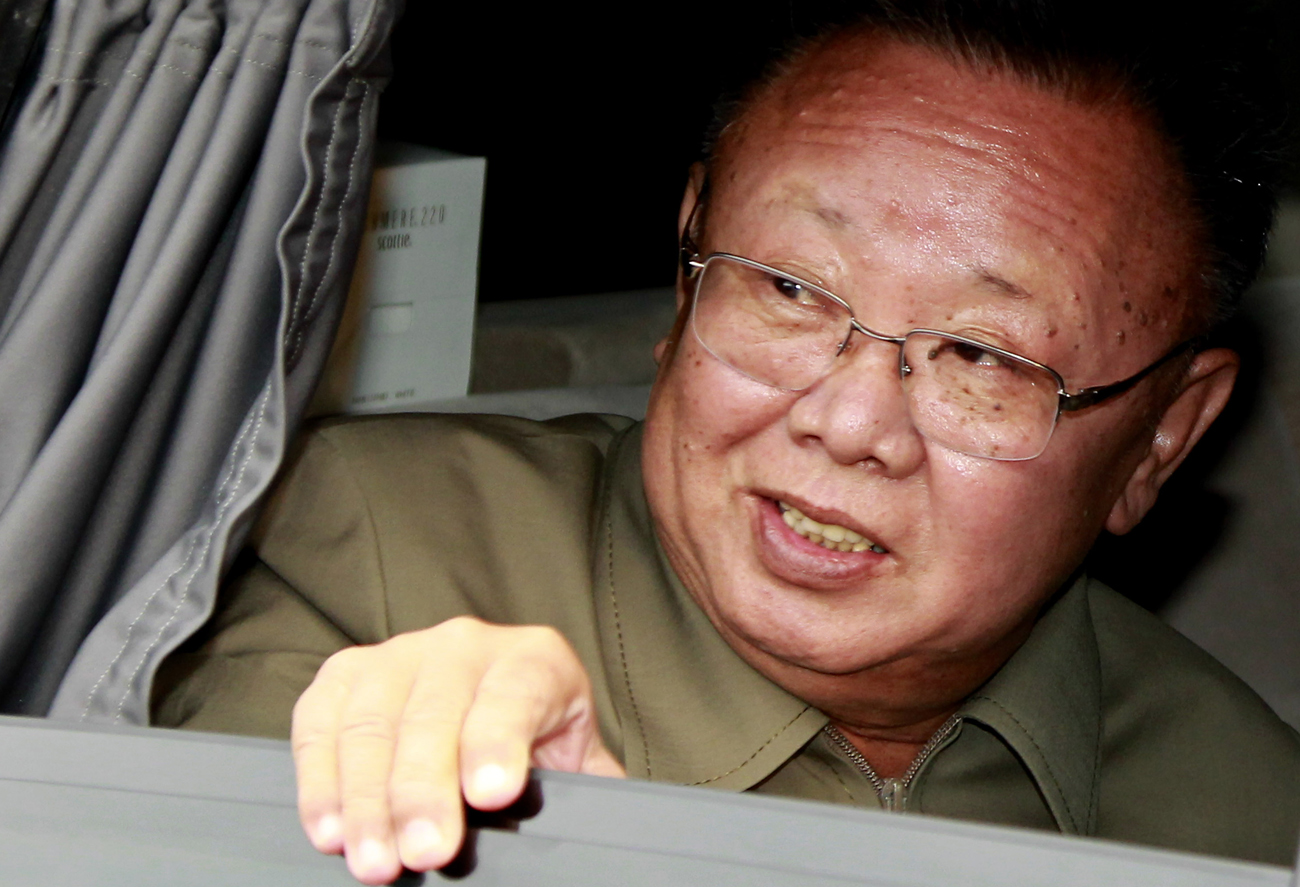 Kim Jong Il, the diminutive, platform shoes-wearing, pompadour hairstyle-bearing enigmatic ruler of the Democratic People’s Republic of Korea has died. Kim Jong Il had guided North Korea’s emergence into a nuclear-armed, missile-equipped nation with the world’s fifth-largest military, but one that signally failed to produce sufficient food to keep the country away from the brink of famine and starvation.  By J BROOKS SPECTOR.

Although Kim Jong Un will take over from his father as ruler, South Korea is on high alert, as the “Dear Leader’s” demise brings with it potential political uncertainty and military instability. Kim’s death, 17 years after inheriting the leadership of the country from his father, Kim Il Sung, was announced on North Korean state television on Monday – together with a period of prolonged national mourning and a funeral at the end of December. Kim Jong Il’s death was attributed to a heart attack from his “physical and mental overwork”.

He was widely reputed to have a distinct preference for good cigars, fine cognac and rich, gourmet diet and had reportedly suffered from both diabetes and heart disease. Kim had a passion for film, as well as the occasional kidnapped South Korean director and actress, and he reputedly held a video collection of some 10,000 titles. As an international leader, he was virtually unique in eschewing travel by air, preferring to make his infrequent forays to China and Russia in specially equipped trains. At his death, Kim Jong Il was variously reported to be 69 or 70 years of age.

His official birth story holds that he was born in 1942 on the summit of the sacred Korean mountain of Paekdu, with a birth heralded by a new star in the heavens, a double rainbow visible in the sky and a flight of eagles. More generally, he is believed to have been born in Soviet Siberia in 1941 while his father, Kim Il Sung, was living in exile with a Soviet-supplied guerilla movement opposing the Japanese occupation of Korea.

Kim Jong Il officially took over the leadership of North Korea after his father died in 1994, becoming chairman of the National Defense Commission, commander of the Korean People’s Army and head of the ruling Worker’s Party, with Kim Il Sung labelled North Korea’s “eternal president”. Kim Jong Il dutifully carried on with his father’s policy of “military first”, devoting a major share of the country’s very limited resources to building and maintaining the world’s fifth-largest military establishment – even as the country’s population endured prolonged food shortages and frequent famines. Photo: A man cries over the death of North Korean leader Kim Jong-il in Pyongyang in this December 19, 2011 still image taken from video. Kim Jong-il died of a heart attack while on a train trip, state media reported on Monday, sparking immediate concern over who is in control of the reclusive state and its nuclear programme. REUTERS/CCTV via Reuters TV

Along the way, he also urged the military to develop tactical and strategic missiles and aim for a nuclear-arms arsenal. The latter culminated in an underground nuclear test explosion in October 2006, with a second test in 2009. Following the first test explosion, regional leaders had negotiated a disarmament-for-aid pact the North signed in 2007 and began implementing later that year. The second test led to a UN sanctions regime in response, in tandem with a continuing effort to achieve negotiations to deal with the dismantling of the North Korean military effort to develop nuclear weapons.

In the wake of the most recent famine period, a growing number of North Koreans have fled the country into China – providing information and insights to the international community about the extent of severe hunger, political persecution and human-rights abuses in the country. North Korean officials have vociferously denied these reports.

In the past several years, the late leader’s third son, Kim Jong Un, following reported schooling in Switzerland, and now aged 27, has increasingly been positioned to take over authority as the third generation of his family in power. He is now officially tabbed “The Successor Leader” to his late father. Since its founding, this unofficial Kim dynasty has boosted an all-encompassing cult of personality and the country’s official ideology of “juche” or self-reliance.

In the past several years, Kim Jong Un has been granted increasingly high-level military titles and official positions to groom him for higher things. Kim Jong Il’s eldest son, Kim Jong Nam, was apparently deleted from the country’s line of succession when he was “outed” in 2001 while trying to visit Tokyo Disneyland with his family while using forged Latin American passports.

Over the years, the elder Kim’s determined pursuit of nuclear weapons and the missiles to deliver them, as well as his military’s repeated threats towards South Korea and the US have led to fears war might break out once again on the Korean Peninsula – or that North Korea might even pass along weapons of mass destruction to international terrorist movements. Such fears drew support from acts such as North Korea’s use of an explosive device to kill members of a delegation of South Korean officials on an official visit to Burma in 1983. Kim Jong Il was reputed to be the figure behind that attack. Also, in 1987, after the bombing of a Korean Air Flight in flight that had killed everyone on board, the North Korean agent who confessed to planting the device said Kim Jong Il had personally ordered its destruction. Photo: Kim Jong-un (C), son of Kim Jong-il (not pictured) visits Mokran Video Company in Pyongyang in this undated picture released by the North’s official KCNA news agency September 11, 2011. KCNA did not state precisely when the picture was taken. North Korean heir apparent Kim Jong-un’s slicked-back, high-sided haircut is a fashion hit in Pyongyang where young men are apparently queueing up for a similar cut. Kim, believed to be in his late 20s and known as the “Young General,” is packaged to look like his late grandfather, the secretive state’s founder, Kim Il-sung.

Following the news of Kim Jong Il’s death, Japan has said it is closely following developments, and the White House announced “the president has been notified, and we are in close touch with our allies in South Korea and Japan. We remain committed to stability on the Korean peninsula, and to the freedom and security of our allies.” South Korea, meanwhile, has put its military on “high alert” and South Korea’s president, Lee Myung-bak, convened a South Korean national security council meeting to monitor and evaluate North Korean developments. Substantial American forces have been stationed in South Korea since the Korean War of 1950 to 1953, and US and South Korean forces are reported to be sharing intelligence as they watch developments.

In the 2000s, North Korean international-relations policies have oscillated between offers to open relations with the rest of the world – especially South Korea with agreements over investment in special trade zones, urgently required food aid and carefully monitored trips by South Korean tourists to historical and cultural sites; and with the US over the supply of fuel for conventional power generation – and threats to engulf South Korea in those archetypical rains of fire.

As a result, some analysts are considering how Kim Jong Il’s death might bring about a period of political uncertainty or even military instability if a behind-the-scenes power struggle ensues. This, in turn, will almost certainly give analysts and military experts concerns about the nature of the command and control mechanisms in place – and operational – over both North Korea’s missiles and its nuclear-weapons-grade materials or devices.

While Kim was usually secretive, the world’s best glimpse of the man may have come back in 2000, when a more accommodationist South Korean government’s conciliatory “sunshine policy” toward North Korea led to the first-ever summit between the two Koreas and nurtured unprecedented inter-Korean co-operation. A second summit was held in 2007 with South Korea’s Roh Moo-hyun but this thaw ended in early 2008 when conservative South Korean President Lee Myung-bak took office with a pledge to press North Korea more firmly.

Kim Jong Il’s trademark attire of jumpsuits and sunglasses was mocked in films like Team America: World Police, a movie populated by puppets that was released in 2004. Beyond film and fine food, Kim was said to have interests that included professional basketball, and fancy cars. One account of his lifestyle came from Konstantin Pulikovsky, a former Russian presidential envoy who accompanied the North Korean leader on his private train. Pulikovsky said Kim’s train was stocked with crates of French wines and received live lobsters en route. And a Japanese man who claimed to be Kim’s private sushi chef said the leader’s banquets often started at midnight and lasted until morning – with the longest lasting for four days. DM