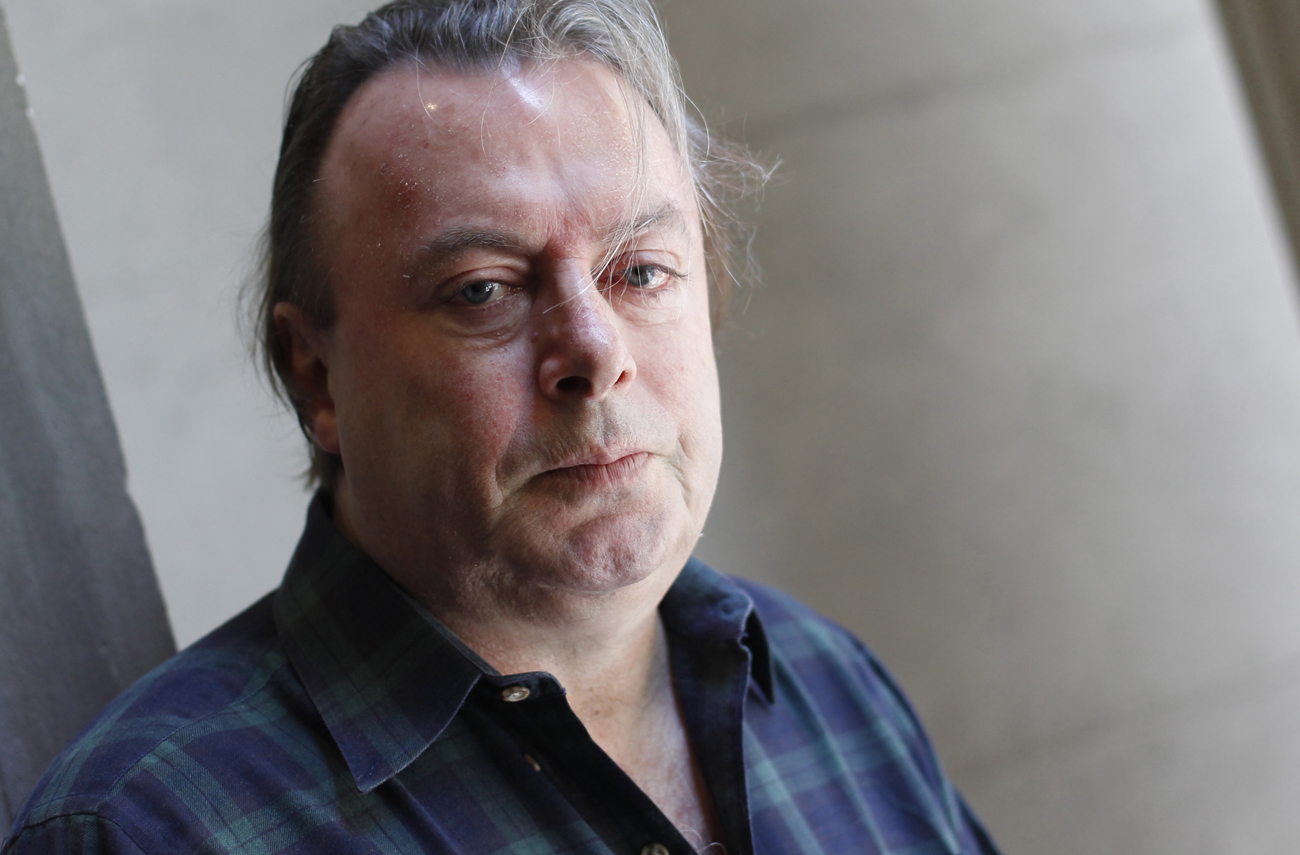 The world’s great contrarian has passed away from esophageal cancer at the age of 62. What will we do without him? By RICHARD POPLAK.

It may seem strange, but the Maverick family of publications did not have a canned Christopher Hitchens obituary cooling in the digital vaults. His death comes as no surprise; he had been dying of esophageal cancer since early 2010. Nonetheless, there are some deaths that are too difficult to face, especially for those who aspire to work in the tradition of Hitchens and his literary ancestors—Jefferson, Paine, Orwell, et al. He was an intellectual lodestar, a father figure, inviolable. He sneered at God, pissed on piety, spoke truth to power, thus becoming Power—a statue that all thinkers stood before, whether to pay the appropriate respects, or to spit at its marble feet.

So there was no way for us to compose an obituary; instead, we struggle with a eulogy. And the first thing that we must note is that, in a way, the Hitch is lucky: he checks out during terrible times. He will not be forced to pen a column about the third coming of Newt Gingrich; the curdling of the Arab Spring in Egypt; the implosion of the euro and the continent that begat it; anything to do with Africa. But times are always terrible. Throughout some of the worst of them, Christopher Hitchens acted as our Virgil, quick with an allusion to some obscure but apposite literary text, ready with a historical precedent that explained the seemingly senseless.

His biography is well known even to his casual readers; he was not a private man. Every corner of his life made it into his writing, because he lived in order to write. The work came first; everything else was in service of it, including the booze, the cigarettes, and the other elements of what he derisively called his “lifestyle.” He mixed the donnish with the sybaritic, the bohemian with the upper crust. His job was being alive, and setting that process down on paper. And this often meant finishing the second bottle, staying the extra hour, smoking the last fag. It killed him. But that’s scarcely the point.

The son of a bookkeeper and a woman who kept her Jewish roots a secret from both young Christopher and his father, he found his way to Oxford, and counted among his friends a dazzling literary clique: Martin Amis, Salman Rushdie, Clive Owen, Julian Barnes and other members of the Booker winning set. He began his intellectual life as a Trotskyite, and ended it skirting the neo-conservative fringe, and it’s hard to know which hat he enjoyed wearing more. He was just as invigorated a book reviewer for International Socialism as he was a gonzo reporter for Vanity Fair. He was a man of enormous appetites, and for his leftist friends to assume that they had him in their camp for life was to misunderstand the role of the contrarian.

For the Hitch had a brain that is to thinking what Lance Armstrong’s lungs are to cycling. He was a freak of nature, with a photographic memory that could recall pages of dense text; he could out-Google Google. He wrote thousands of words a week, for publications as diverse as the New Statesman, Slate, Socialist Worker, and The Nation over the course of his career. The thrill in reading the Hitch was always in the connections he made—the very essence of erudition. He didn’t quote Shakespeare to show off his book learning. Rather, he wove the Bard and hundreds of other writers into a life-long conversation that was, at heart, about the meaning of morality. It’s the only conversation worth having, and while his stance was always political, it was never narrowly so. He saw through the bullshit, no matter what side he was batting for, and he was controversial because he made every barb sting.

He went after, in the following order, Henry Kissinger, Mother Theresa and God. In a sense, they represented the same thing: self-righteous authority figures under whose reign the irrational held sway. The Hitch was uncompromising in a literary fued; it was tough to locate shades of gray, and had he not been such an efficient wit, he would long ago have faded into obscurity. But his prose was like an Aqua Velva shooter—it burned going down, and made you feel briefly wonderful before the doubt set in.

I’m not alone in saying the following: As long as I’ve had an intellectual life, it has been presided over by Christopher Hitchens. His peers dropped off, either by becoming horrendously middlebrow (MacKewen), emptily controversial (Amis) or increasingly irrelevant (Rushdie.) At his death, the Hitch stood alone, rhapsodised by his old drinking buddies, gently chastised for his positions on this statesman or that dirty war.

We must not leave the following fact to irony: Christopher Hitchens and the Iraq war ended their innings in the same 24-hour period. Instead, we must assign this coincidence to the realm of tragedy, and note that all great thinkers will, at some point, butt up against troubling thoughts. History has refused to come clean on whether Hitchens was correct in supporting George W. Bush’s invasion, which was in turn buttressed by men and women who came off like characters in a discarded Orwell manuscript—liars, cheats, thieves and dissemblers. He saw the Iraq invasion as a new front in the war against Islamofascism (a coinage attributed to him), an ideology that had attacked his adopted home, and put a bounty on a beloved friend.

“It was, if I can phrase it like this, a matter of everything I hated versus everything I loved,” he said of Salman Rushdie’s fatwa in his bestselling memoir, Hitch 22. “In the hate column: dictatorship, religion, stupidity, demagogy, censorship, bullying and intimidation. In the love column: literature, irony, humor, the individual and the defense of free expression.”

Which is a statement that has the duel purpose of battle cry and summation. At the root of Hitchens’ many intellectual musings was an unwavering belief in secular liberalism. This could be as reductive as it was expansive; it clouded his thinking as much as it allowed it to soar. If he spent his life on Orwell’s knee, he never quite wrote with Orwell’s gravitas. He was often glib; Orwell wasn’t. He wrote with glee; Orwell wrote in despair. There was a touch of the callow in Hitchens’ work; one always felt like he was having an imagined late-night dorm room argument with a Catholic priest, a vegan and a large-breasted daughter of a baron. His arguments against God pale next to Thomas Aquinas’s arguments for—not because he was wrong, necessarily, but because his thinking did not contain enough beauty.

But how we loved the man. I crossed paths with Hitchens only once in my career. Which is another way of saying that we used the same fixer in Jakarta, Indonesia, where he had travelled to write about the ghastly Bali bombings in 2002. Some years later, Jason, our mutual enabler, told me that the Hitch never left the couch in the cool of his house, drinking and smoking and writing about the atrocities with the proper mixture of outrage and I-told-you-so exasperation that were his trademark. In the end, it didn’t matter that the Hitch didn’t flatfoot the sidewalks of Java, because what was there to say? What nuance could one bring to such a horror that doesn’t tip over into moral relativism, a sin the Hitch was never, ever guilty of? He could have brought context—the same sort of deep historical knowledge that he employed in trashing, say, the Oscar-winning monarchy-porn The King’s Speech, or other middlebrow twaddle. But the Hitch was not in Indonesia to find something. He was there to bring something: the might and weight of the principles he believed in, and was willing to die for—indeed, did die for. For his crutches were the death of him, as we knew from last year they would be.

It’s a strange world without Christopher Hitchens, just as it was strange for another generation when Orwell passed away. Who do we look for to cut through the mendacity, to out-Google Google when we understand that search engines without the appropriate engineers are just another form of ignorance? Who will explain Newt Gingrich as President; the coming Meryl Streep film about Thatcher; the next pope? This falls to us now, the Hitch’s progeny. I hope to God—or to the absence thereof—that we’re up to the task. DM