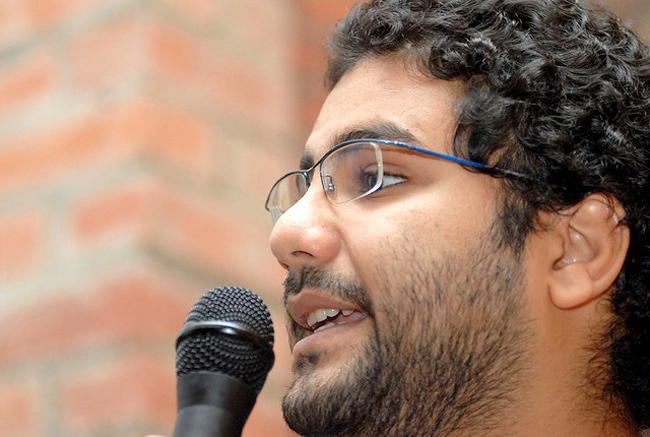 Jailed Egyptian blogger Alaa Abd El Fattah – known on Twitter simply as @alaa – made yet another court appearance on Tuesday. And, yet again, his jail time was extended by 15 days. El Fattah lived for some time in Pretoria, and  THERESA MALLINSON spoke to his South African friends about their recollections of him – and what steps can be taken to secure his release.

Alaa Abd El Fattah has been detained in Tora Prison in Cairo since late October. The activist, blogger and techie has been charged with congregation, inciting violence, stealing weapons and destroying military property, with an added recent charge of “premeditated murder with the intention of committing an act of terrorism”, according to Ahram Online. The prosecution is arguing that El Fattah committed these crimes at the Maspero clashes on 9 October, although internet records show he was not even in the vicinity at the time the crimes allegedly took place. As is the case with so many journalists currently imprisoned across Africa the phrase “trumped-up charges” is most definitely applicable.

Tuesday’s court hearing involved not only El Fattah, but also more than a score of others, and took place inside a closed court sitting late into the night. When the verdict was finally delivered, just after 23:00, it was dispiriting: El Fattah and his co-accused were all sentenced to a further 15 days in detention. Earlier it was reported that two of the charges against El Fattah – congregation and inciting violence – had been dropped, but that doesn’t make much difference to his immediate circumstances: he will remain jailed for at least the next two weeks. When the sentence was announced, the hashtag #freeAlaa, which had been included in a steady number of tweets throughout the day, went into overdrive, as many Twitter users expressed their frustration with Egypt’s current military rulers and tweeted their support for El Fattah and his family.

Watch: Alaa and the Maspero Detainees After 45 Days:

El Fattah has friends and former colleagues in Pretoria, where he worked from 2008 until the beginning of this year. In January he left his employment www.translate.org.za, headed up by Dwayne Bailey, to participate in the revolution. Speaking to iMaverick before the result of El Fattah’s latest court appearance was known, Bailey did not hold out much hope that he would be freed. “I’m on the cynical side, which is I don’t trust the military want him to be released,” he said. “The military are quite happy for the people to vote for whatever they deem to be the correct party; I think activists like Alaa want the people to decide. He would be such a believer in the people and the democratic process, so he’s much more interested in what the people want… I think he’s always going to be at loggerheads with the police state.

“One of the reasons I think he is being targeted is that in the last few days that we were meeting with him he was very concerned about what the dispensation would be that people would choose for the new Egypt,” Baily said. “He was particularly unimpressed with the South African system – proportional representation doesn’t work… He looked at a few models, basically trying to do what the Freedom Charter did: going around and asking people what they wanted. As South Africans, it’s very exciting – mimicking something from our history – but I think if you are the military, this can easily be construed as something negative.”

Andrew Rens met El Fattah at a blogging workshop at Rhodes University in Grahamstown in 2006. “He’s an IT entrepreneur,” said Rens. “He could bring both those worlds together, the political and entrepreneurial angles. And he’d already been detained by the Mubarak regime, because of things he’d blogged.

“I have this sort of bizarre sense of knowing on one level what Alaa’s going through; in the course of my life I’ve been falsely arrested and accused,” he told iMaverick. Rens, who is now a doctoral candidate at Duke University in the US, used to be an attorney. “There were some malicious policemen who I was investigating; the arrest was made to deflect attention from the crimes they’d committed,” Rens explained. “And everyone else in the system said to me: ‘I’m sorry about this; we’re just doing our jobs’.”

Rens was careful to point out that he hadn’t been in Egypt during El Fattah’s arrest and trial, but said: “Knowing how these things work, having experienced them in South Africa, and having some familiarity with Egypt, it’s obvious the charges are complete nonsense. What should’ve happened is that the prosecutor and the judge should’ve had the integrity to dismiss the charges, now that the civilian prosecution has taken over,” Rens said. El Fattah and the other protesters were originally charged in a military court, but the trial was then referred to a state security court and, on Monday, to a civil court.

“They’ve dismissed some, but not all of them; it’s simply fear and complacency, and neither is acceptable,” he said. “They think they’re just doing their jobs. If you want to live in a just society, you can’t do that. A lot of South Africans also claim they’re just going through the motions of their jobs,” Rens pointed out. “For as long as Egyptians and South Africans claim to be just doing their jobs, there isn’t going to be a just society – not in South Africa, and not in Egypt.”

In late October Rens published an open letter on his blog addressed to the Egyptian ambassador to South Africa, condemning El Fattah’s detention, and calling for his release. This letter was copied to the minister of international relations and co-operation, and the South African Human Rights Commission. Rens has yet to hear back from any of the people he contacted. But why should South Africans care that El Fattah remains in jail? “Obviously the link to Alaa is that he’s lived here,” Rens said. “(But) South Africa has a huge stake in democracy and the rule of law in other African countries, and we have a responsibility to support democracy and human rights in other countries. Having Egypt as a democratic ally would be hugely beneficial, but that’s not going to happen if you have a military regime.”

El Fattah’s detention is about much more than his own personal circumstances. It’s about Egypt – and Egyptians – choosing what kind of society they want to live in after the revolution. At the moment, the military is following in former dictator Hosni Mubarak’s footsteps in throwing its critics in jail. And while they remain behind bars, the country can’t claim to be truly liberated. But the detention of El Fattah and others is providing a sharp reminder that the fight for human rights is far from over. As El Fattah’s supporters reportedly chanted when he was trucked back to jail. “Alaa, our hero, your detention is freeing Egypt.” DM