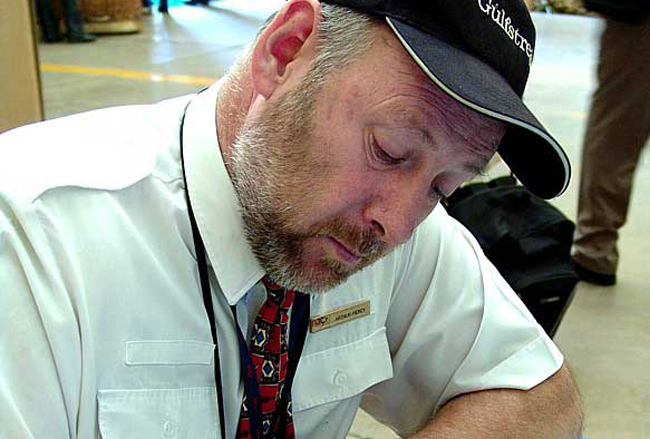 In 1987 in a dog fight over Angola, Arthur Piercy’s Mirage F1 was damaged by a Cuban pilot who deployed a missile at Piercy’s fighter craft. Piercy made it back to base, but on landing had a crash that left him permanently in a wheelchair. These days, Piercy’s flying again, and has launched a global quest of possibility and reconciliation, a journey that will see him reunite with the Cuban pilot who fired that missile. By MANDY DE WAAL.

Arthur Piercy was 13 years old when his father took him to Baragwanath Aerodrome for an air show that would change his life. It was the day Piercy would see his first Mirage F1.

“The fighter aircraft gave a display and I clearly remember when it was over, the hairs on the back of my neck stood up. I looked up at my dad and said: ‘When I am grown up I am going to fly one of those.’ I never wavered in making that dream a reality. That day I promised myself I would fly that aircraft, even if it was the last thing I would ever achieve. Little did I know what a life changing experience I would go through while flying that aircraft.”

Piercy’s opportunity to fly would come at the beginning of 1977 when he was called up for national service and applied for pilot training after his basic training. After being accepted, he qualified for his wings towards the end of 1978, and within five years he was fortunate enough to be sent on a Mirage course at the South African Air Force base in Pietersburg.

During the mid-sixties, seventies and eighties, South Africa was an apartheid state and at war with Angola and Namibia (then called South West Africa). South Africa launched a series of invasions into the then South West Africa and Angola, and it wasn’t long before Cuba responded with a large-scale intervention in support of the MPLA (Movimento Popular de Libertação de Angola).

And so it was that Piercy would find himself in a Mirage F1-CZ over southern Angola, engaged in a dog fight with a Cuban pilot in a MiG-23 in 1987. “We ended up setting ourselves head on,” says Piercy, remembering the aerial combat. “When you go into a fight like that, your primary role is to get behind the person you’re in combat with so that you can fire a missile on them. You must understand that in those days, we never had fancy technology that allowed us to fire a missile head on. Of course the fighter aircraft that you are up against are trying to do exactly the same thing, and you invariably approach each other head on.”

Piercy got a view of the MiG, which then literally passed 30 to 40 meters below him as he flew wingman to his commander’s squadron leader. “We went into a turn and we got head on again, and that’s when he fired the first missile which damaged the entire tail section on the right hand side of the aircraft. I wasn’t sure how much damage had been done, and the boss said I had to turn around and go home.”

The Mirage F1 started leaking petrol and hydraulic fuel, but Piercy managed the flight to Rundu and landed at the air base there, which is situated in the northern part of Namibia, and on the border of Angola. The 28-year-old pilot planned to land the craft on a new stretch of runway, but when the Mirage was down and Piercy applied the brake, nothing happened. The aircraft went through the arrester-bed (sandpit) at the end of the runway and kept on going. After that the Mirage went through the security fence.

Piercy remembered hearing a bang and the smell of cordite as the ejection seat went off. There was a rush of wind. He felt the silk of his parachute on his face. The next memory he has is of coming to his senses, lying on the sand in absolute agony. He tried to move his legs but there was no response.

The pilot would eventually be taken to 1 Military Hospital in Pretoria where he would leave in a wheelchair with a C6, C7 fracture of the neck that would leave him permanently disabled. This didn’t mean that Piercy would stop dreaming of flying.

Years later Piercy would approach the Civil Aviation Authority and tell them he wanted to fly again. “They said they would allow me to do it on the condition that I could get in and out of an aircraft unassisted. Basically if there was an emergency, they wanted to ensure I could get out of the aircraft and get away from it.”

Piercy started looking for an aircraft that was accessible, and that he could modify. His solution came in the form of an amphibian craft called a SeaWing. “It is the perfect vehicle because I realised I could cut a hole in the fuselage to get in and out.”

But Piercy isn’t just remodelling the plane; he’s almost done building it from scratch. He brought the parts of the craft in over a decade ago, when the rand was still R2.97 to the dollar, and now he’s almost done.

That’s not the incredible part of the story though. The real wonder of this tale is that he’s made contact with the Cuban pilot who launched that missile at his Mirage, and has invited the pilot to fly with him in what will be a worldwide tour in this plane he’s built himself. The Cuban has agreed. (It’s amazing who you can find through Facebook these days!)

“I found out from military intelligence and from news reports that the man who was in the dog fight with me was called Alberto Ley Rivas. I even found a couple of photographs of him using Google. About four months or so ago, I started looking for him because we had this fight over Angola and we didn’t even know each other,” says Piercy.  Two clicks on Facebook was all it took.

“He’s all the way from Cuba flying a Russian aircraft in Namibia, and I was flying a French designed aircraft in African airspace. He was doing a job. And I was doing a job. We were in a skirmish that was part of a bigger picture that had to do with politics, the military and all sorts of other strategies, but we are just two human beings. I wanted to fly around the world to show others what disabled people can do, but also thought it would be the best to make this a global flight of reconciliation,” he says.

Ley Rivas doesn’t speak English so working with an intermediary, an ex-squadron commander who flew with the Cuban pilot, Piercy told the man in the MiG about his plans, and Ley Rivas agreed to fly with him.

Now all Piercy needs is the engine for his SeaWing, then it will be another four months before his plane will be completed and he can launch his global tour of possibility and reconciliation. “The engine costs $48,000 so I am fundraising and aim to get half a million to complete the plane and then I will be putting together my plans for the world tour. I want to show people that the disability is not a ‘handbrake’. People don’t achieve their goals because of fear, or a lack of confidence, or because they don’t have enough passion. That’s hardly an excuse. Whatever you dream of, put your mind to, you can do.”

Piercy’s a maverick, of that there’s no doubt – and we at Daily Maverick hope he gets the funds he requires to give his dreams wings. DM