Egyptian blogger @alaa remains in prison; outside, his son @Khalaaa is born 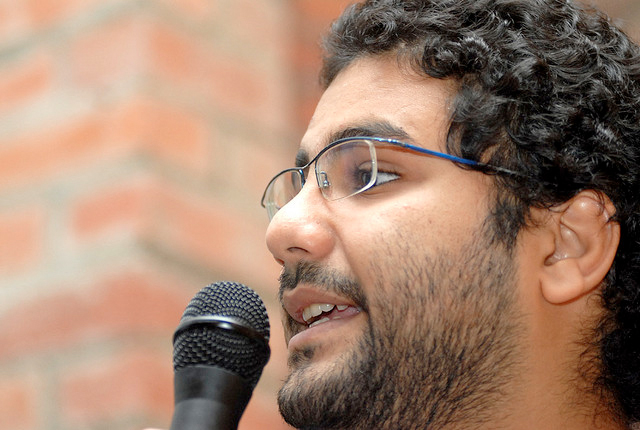 Egyptian blogger and activist Alaa Abd El Fattah has been detained in prison on trumped-up charges since 30 October. An appeal on Monday for him to be released immediately was dismissed. On Tueday his wife and fellow activist Manal Bahey Al Din Hassan gave birth to the couple's first son, Khaled. El Fattah remained behind bars, rather than being able to attend the birth of child. By THERESA MALLINSON.

Khaled Alaa, aka @Khalaaa, joined Twitter mere hours after he was born on Tuesday. By Wednesday evening, his account was fast approaching 2,000 followers.  But, for all his support on the interwebs, for all the love and attention of his mother, activist Manal Bahey Al Din Hassan, right now baby Khaled is missing one thing: a personal welcome from his father.

Khaled Alaa’s father is Alaa Abd El Fattah, the Egyptian blogger and activist who’s been detained since 30 October. El Fattah was originally detained for 15 days; this period was extended for further 15 days; and then for the same period again. Seeing a pattern here?

There was some hope when El Fattah’s case was moved from a military court to a state security emergency court. El Fatteh had refused to be tried under martial law – no surprises there, as he is an active member of the “No Military Trials Campaign”. But the change of courts has not seemed to make any difference to the manner in which his release date is continually deferred. In fact, the charges against him have since been stepped up.

On Monday El Fatteh’s lawyers launched an appeal against his latest sentencing, asking for his immediate release, but to no avail. This meant that he remained behind bars for the birth of his first child, Khaled. On 14 November El Fattah wrote an impassionated blog post from prison, anticipating just such a situation. “How will I miss the birth of my first child? How will I handle being away from Manal at such a time? How will I get a grip while waiting to know if they are okay or not? How will I not see his face, or his mother’s face when she sees his?” El Fatteh wrote. “And how will I face him when I get out of prison after promising him he would be born free? We named him Khaled to repay part of the huge debt we owe Khaled Saeed. But instead of imprisoning those who killed him, we go to jail.”

Fellow Egyptian Hassan Elgayesh (who, it must be noted, has contributed to our sister publication Free African Media as well as Daily Maverick – Ed), was of a similar mind. “Our revolutionaries are held behind bars… while those from the fallen corrupt regime roam free,” ElGhayesh told Daily Maverick. “When they first said they will (resort) to military trials and emergency laws it was to deal with the state of chaos we were living in and to deal with thugs… but actually they use it against activists and bloggers.”

On Monday El Fatteh’s father, Ahmed Seif El Islam appeared on Egyptian television to state his son’s case. As reported by Ahram website, the original charges against El Fatteh included “the theft of military arms, destroying military property, and inciting violence against military personnel” during the Maspero clashes on 9 October. The High State Security Court later added a further charge of “premeditated murder with the intention of committing an act of terrorism”.

But, as El Islam argued, Alaa’s Tweets, Facebook posts and phonecalls on the date in question indicate that he was not even at Maspero until later in the evening. This contradicts the testimony of eyewitnesses called by the prosecution. According to Ahram, he questioned the fact that  “while several alleged eyewitnesses who delivered testimony against Abd El Fattah had already testified, 11 witnesses that he had called on to deliver testimony which could clear his son had yet to be summoned by investigators”.

This is backed up by the Egyptian Center for Social and Economic Rights. The Daily News Egypt newspaper reported that the center had said: its team “presented documents (at the appeal) proving that Abdel-Fattah arrived on site of the clashes at 8pm, when the violence already ended.”

El Fattah’s case will come before court again on Sunday, where his detention could be extended by yet another 15 days while investigations continue. It would be only fair if the police do their homework properly before then.