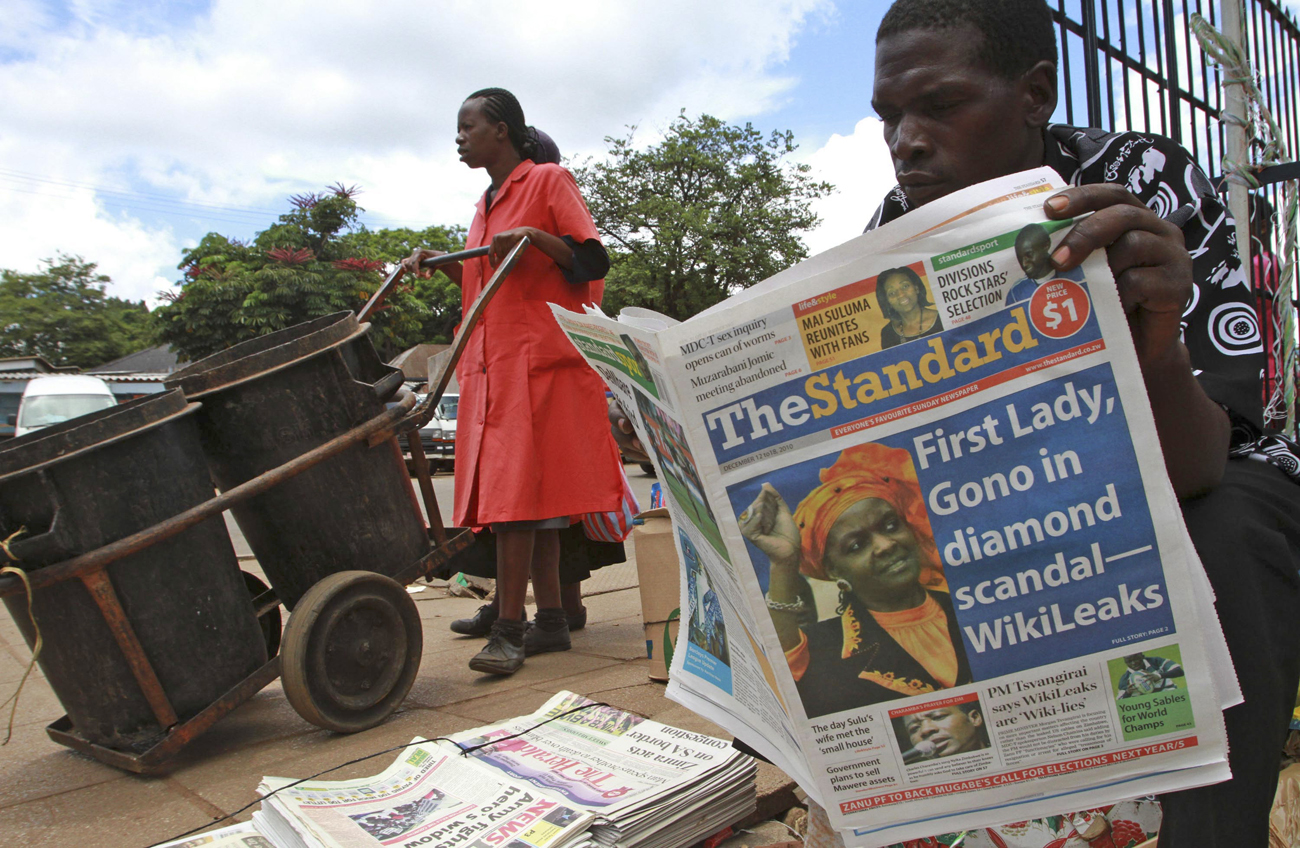 On Sunday, three advocacy officers from Media Monitoring Project Zimbabwe were arrested by the police. Then on Monday, the MMPZ's Harare offices were searched, and Andrew Moyse, the MMPZ project co-ordinator, was also detained. Although Moyse was released yesterday, his three colleagues are still imprisoned. The Crisis in Zimbabwe Coalition is demanding their immediate release. Doesn't seem the government is listening though. By THERESA MALLINSON.

On Sunday, Media Monitoring Project Zimbabwe advocacy officers, Fadzai December, Molly Chimhanda, and Gilbert Mabusa, were arrested in Gwanda on charges of organising an unauthorised meeting and “participating in gathering with intent to promote public violence, breaches of the peace or bigotry”. On Monday the organisation’s offices in Harare were searched with a warrant, and 127 training DVDs confiscated.

The search warrant stated that the police had reason to believe MMPZ may have been “publishing or communicating false statements prejudicial to the state”. But according to an MMPZ statement, the DVDs were, in fact, “essentially calling upon the media to contribute to peaceful elections through fair, accurate and balanced coverage of election campaigns by Zimbabwean political parties”. (Of course, publishing “fair, accurate and balanced coverage of election campaigns” may very well be prejudicial to the state – or at least the Zanu-PF contingent within the state – but that’s hardly the point.)

As well as confiscating the DVDs, MMPZ project coordinator Andrew Moyse was detained. Both MMPZ and the Crisis in Zimbabwe Coalition issued statements condemning this action. “Whilst the police officers indicated that Andrew was not formally under arrest, MMPZ is concerned that the police may detain him to investigate a matter whose circumstances and gravity do not at all warrant pre-trial detention,” MMPZ said. “MMPZ urges the police to grant Andrew Moyse all his pre-trial rights and not to harm his physical and psychological person for the entire period he is in their custody.” Meanwhile, CZC demanded that “The? police immediately release Andrew Moyse, Fadzai December, Molly Chimhanda and Gilbert Mabusa from custody?and?grant?them?their?pre-trial rights.”

The Movement for Democratic Change – the second main party that currently makes up Zimbabwe’s inclusive government – also spoke out against the detentions. “The ongoing police purge on the media and civic society is not only unfortunate but entirely wrong and unnecessary, as it puts the country in an awful position, especially when the inclusive government is supposed to be pushing for improved freedom of expression and association.” the MDC statement read. “The MDC insists that the success of Zimbabwe as a country is only possible through a free and fair election, respect for property and human rights, as well as a free media environment and freedom of speech.” The US Embassy in Harare also issued a statement, noting “with regret and concern the increasing frequency of arrests and detention of media workers and civil society activists throughout 2011”. It went on to add: “The free flow of information and a strong civil society are critical to the process of political and economic development.”

Moyse was released on later on Tuesday, and his lawyer, Trust Maanda from Maunga, Maanda & Associates, spoke to Radio Voice of the People about his client’s ordeal. “The police took him to a separate room where they interrogated him thoroughly trying to establish what’s his role in the MMPZ, and later released him without levelling any charge against him,” Maanda said. “From the look of things we are not sure that they have dropped their case because the reference on the police documents is from Gwanda, meaning that maybe they might want to take him to Gwanda and join him with his subordinates who are currently detained there. But what I can say for now is Moyse has been released without charges,” he said.

On Wednesday evening CZC spokesman Thabani Nyoni told iMaverick that December, Chimhanda, and Mabuse still remain in detention. “Actually in the afternoon we established that they were remanded in custody. But we are yet to establish when the next court date is. I’ve been following that to see what’s going to happen,” Nyoni said. “What we’ve done is demanded that they be released, but unfortunately our calls are being ignored.

“What we are currently doing right now in terms of pressure, apart from press releases, and mobilising other civic-society organisations, (is that) we are also engaging with friendly faces in the inclusive government,” Nyoni said. He explained that “the friendly faces are the ones that are new” – a clear reference to MDC MPs. “Despite the inclusive government, that should have created a conducive environment for free speech, we continue to see the persecution and prosecution of various civil sector and media (people and organisations) – especially those who provide alternative information, (not) propaganda,” said Nyoni.

The three advocacy workers have been charged with offences under both the Criminal Law (Codification and Reform) Act and the Public Order and Security Act. According to CZC – and Nyoni himself – these acts are nothing more than an unwelcome throwback to colonial-era legislation. “What has happened really, in Zimbabwe, is that the Posa Act, and the Criminal Law Act are more or less the similar pieces of legislation to (the old) Law and Order Maintenance Act; what has changed is the name,” Nyoni said: “They basically do the same thing: they restrict public gatherings; they also restrict access to information; under that law you need to get police permission in order to hold gatherings and the police are authorities unto themselves about whether you can gather or meet and share information or not. What happened is there were calls by civil society for a repeal of certain sections of Posa; they were repealed, and brought back in the CLA Act.”

In CZC’s press statement it also demanded that:

Right now, Nyoni doesn’t see the situation in Zimbabwe as anything better or worse than what’s gone before in the country’s recent history. “There is the momentary calm, and then the resumption of hostilities, expressed in the form of civic-society organisations not being able to gather; and political parties being unable to hold rallies, because the police have blocked them from doing so – even when they resort to litigation,” Nyoni said. “Police officers are threatening civic-society organisations especially, and we continue to see instances of violence, even in urban areas.”

“This tells you nothing has changed. You may say it is getting worse, but it has continued like that: there’s momentary calm, and then more hostilities,” continued Nyoni. “It’s really an attempt to make sure that the reform-inclined environment is not given enough space (for) the policies that clearly allow us to have a democratic society (to be) developed.” It seems that in Zimbabwe, the more things change, the more they stay the same.

In an attempt to raise awareness of and create pressure around the current situation in Zimbabwe, Nyoni said that one of the CZC’s strategies was to target SADC and other African countries ahead of the AU Summit in January in Addis. “What I can tell you is that we’ve begun to aggressively engage with certain countries, especially those countries that are likely to have a clear position towards a democratic transition in Zimbabwe,” Nyoni said. “Rather than focusing on South Africa, we need to be focusing on other counties as well, so we can raise the political temperature.” DM