World powers and developing nations do battle at COP17

World powers and developing nations do battle at COP17 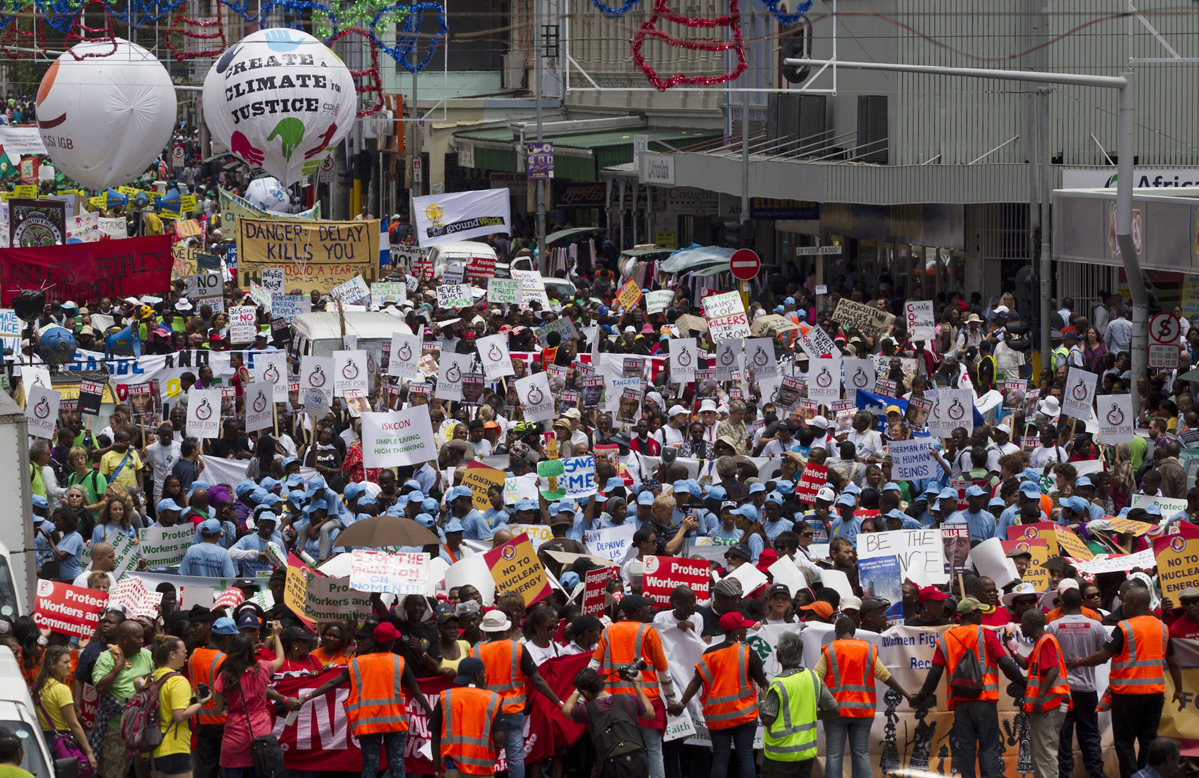 As the second week of negotiations at the UN climate change conference in Durban begins, the European Union claims support is growing for a new legally-binding agreement to cut carbon emissions. While opposition from the US, India and China continues to hold, the EU is itself reluctant to be bound to a second commitment period. By KHADIJA PATEL.

Negotiations in Durban have so far centred around the possibility of a second commitment period under the Kyoto Protocol. The defining feature of the Kyoto Protocol is that it sets binding targets for 39 developed countries to bring about an average 5.2% cut in greenhouse emissions by 2012 relative to their 1990 levels.

The emission cuts required vary from country to country. The EU, for example, which accounts for roughly 21% of current global emissions, must reduce its emissions by 8%, while Russia, which accounts for 17% of global emissions, is permitted to emit the same amount in 2012 as it did in 1990. According to the United Nations, the Kyoto Protocol places a heavier burden on developed nations under the principle of “common but differentiated responsibilities”.

The EU already faces internal political challenges in achieving consensus to further increase their Copenhagen pledges and also face grave difficulty in according specific targets to their 27 member states in an equitable fashion.

Instead of a second commitment period on the Kyoto Protocol, the EU has sought a roadmap in Durban that will require negotiations on a future global climate change governance apparatus beginning in 2012. The EU roadmap also stipulates that a future climate change regime must be a legally binding regime that replaces the Kyoto Protocol after 2020. Significantly, the EU roadmap also proposes that all major economies, including South Africa, Brazil, India, China and the US, all be subject to legally binding emissions targets.

South Africa’s environment minister Edna Molewa indicated last week that the EU roadmap was seen favourably in the South African camp. “The EU roadmap is a good road map,” she said, adding that all the groups have to deal with “conditionalities” in the roadmap.

Commenting on the EU’s proposed roadmap, US deputy climate change envoy Jonathan Pershing stressed that it would have to bind all parties equally.

“We’re not looking for a mechanism in which we would have an obligation to reduce emissions of a legal form and the major emerging economies would have a voluntary program,” said Pershing. “That’s kind of the Kyoto structure.  We are not a party to Kyoto, in no small measure, because of that constraint.”

The US has indicated it will not support a legal mandate to cut emissions without knowing the details of such an agreement.

The United States argues that the voluntary emissions reductions that governments agreed to at the last climate conference in Cancun, Mexico are unlikely to change over the coming years, and there is then little hope that the US will reposition itself to join a legally binding second-commitment period to the Kyoto Protocol.

While Japan, Russia and Canada have all refused to take on a second commitment period under the Kyoto Protocol, India and China have expressed their opposition to the EU roadmap. It is felt that the combination of conditions set by the US and EU are a price the world’s major emerging economies are unable to accept. Non-Annex 1 countries, as the developing world is known, warn that it is particularly difficult to accept the EU roadmap without the guarantee of US participation.

On Saturday, India’s chief negotiator J M Mauskar told a press briefing that no progress on the future of Kyoto Protocol had been made so far. “There has been a reversal of roles with developing countries committing to more actions than the rich countries,” Mauskar said.

He warned that a failure to agree to a second commitment period on the Kyoto Protocol that begins in 2012 would severely undermine confidence in the negotiation process.  “These are legal obligations of the developed world and must be fulfilled at Durban. A decision at Cancun could not be reached on them but Durban must ensure the second commitment period of Kyoto Protocol is established,” he added.

The diplomatic wrangling translates to a situation where the European Union will not sign on to a second commitment period under the Kyoto Protocol until talks on a new global treaty are launched.

“Our objective in these negotiations is not to launch a process for a new climate treaty,” India’s Mauskar said. “This is not what these current negotiations are about.”

In the impasse, it is now proposed that a second commitment period of the Kyoto Protocol should be postponed to 2015.

With Japan, Russia and Canada refusing to be participate in the Kyoto Protocol in future, it looks set for demise in Durban. Disgruntled members of the developing world believe the EU and the US have conspired to set up a situation where the blame for the floundering negotiations in Durban falls on China and India.

At his last press briefing, Pershing praised Cop17 president and South African minister of international relations and cooperation Maite Nkoana Mashabane for the South African mediation efforts during the conference so far, but added that it was important for the mediation to remain impartial as the urgent, high level negotiations begin on Monday.

The International Energy Agency has warned that the world has about five years left to significantly cut carbon emissions in order to prevent irreversible climate change, but the diplomatic wrangling at such conferences falls victim to the suspicion between the old, established powers of the world and the subversive influence of emerging economies. DM