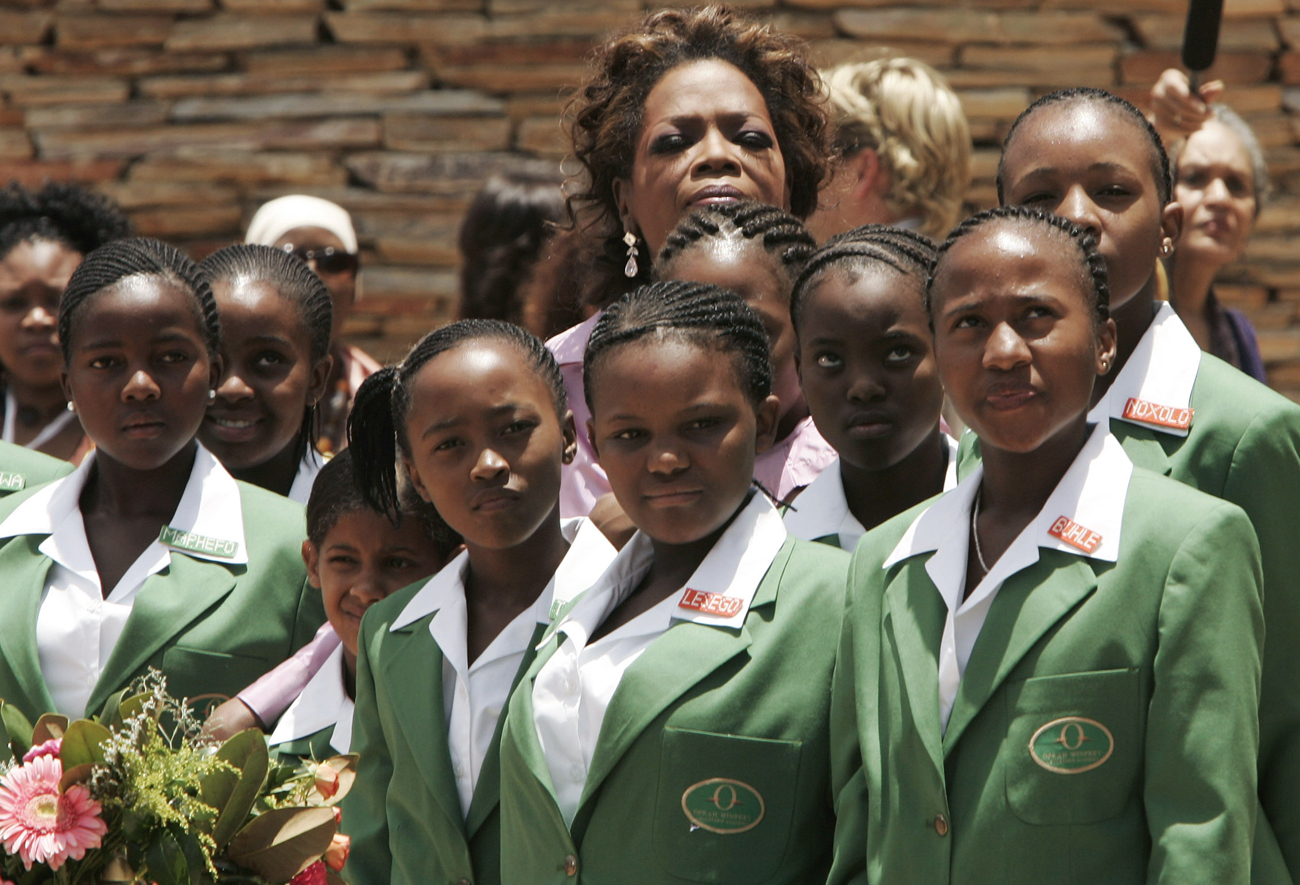 The first group of students to matriculate from Oprah’s Leadership Academy for Girls have just written their final exams. While prospects for the 72 girls matriculating look rosy, the past five years haven’t all been plain sailing for the school. By REBECCA DAVIS.

“Each child has the right to an education, but to attend the Oprah Winfrey Leadership Academy for Girls will be a privilege.” This is the message of Oprah, “founder and benefactor”, on the homepage of her school’s website. When the school opened its doors in January 2007, it did so to 152 pupils and mixed reactions. The South African government had initially planned to build the school in collaboration with Oprah, but pulled out, allegedly in response to criticisms over the school’s perceived “elitism” and luxury. “Think Hogwarts with a Martha Stewart makeover,” one journalist described it at the time. The $40 million Oprah ploughed into the project went partly on details that wouldn’t be out of place in a five-star hotel, and consequently attracted the most attention from the curious media: 200-thread-count sheets; a yoga studio; a beauty salon.

Many of the responses were critical. A fairly typical Newsweek article from the time commented: “The talk-show diva always does things in grand style, of course. But $40 million for a school for impoverished girls in Africa does seem a bit, well, extravagant.” Other more subtle arguments rallied included the suggestion that by running such a luxurious “leadership academy”, she was fostering an expectation that “leaders” should be surrounded by bling.

Oprah hit back by saying that “These girls deserve to be surrounded by beauty, and beauty does inspire.” She told the Newsweek journalist that when she was soliciting designs for the school from local architects, she was sent plans “that resembled a chicken coop”. “It was clear that the attitude was ‘These are poor African girls. Why spend all this on them?’ It was unbelievably upsetting,” she said. It’s hard not to see her point, when you consider that South Africa’s most expensive fee-paying private schools do not receive criticisms that their facilities are in some way unsuitably “good” for their students. Writing in Winfrey’s defence in Salon in the month of the school’s opening, Rebecca Traister chastised critics: “The affronted sense that these girls deserved only bare-minimum accommodations and that a private citizen’s money should have been used to educating them in bulk rather than in gracious individual style reflects our own beliefs that the bare minimum is all poor (black) girls need.”

Another criticism initially was that students would find the transition from their old lives to their new luxurious surrounds too jarring – a charge Oprah countered by laying on counsellors. Besides, she said at the time, “a lot of the girls don’t have homes to go to because they’re orphans”. In her Newsweek interview from 2007, she admitted that during the interview process she stopped asking the prospective students about their backgrounds because she found them too distressing. Attending an arts festival at the school in 2009, she told the Associated Press: “When you think about these little girls three years ago carrying buckets of water on their heads and living with no running water. Now they are talking about going to Harvard and winning a Nobel Peace Prize.” In Oprah’s language about the school, she has occasionally put her foot in it: trying to make the point that the school was for children of disadvantaged backgrounds regardless of race, she once said that “White, Indian and Native American students” were also welcome.

Oprah has been remarkably hands-on with the school – understandably, considering she once called it, rather grandiosely, “the fulfilment of my work on earth”. She chose all the finishings and the uniforms herself, and personally interviewed all 500 of the finalists out of 3,500 girls applying for the available places. If she ever retires, she has said that she plans to spend much of her year in Henley-on-Klip, where the school is based. Each time there has been some controversy involving the school, she has been quick to climb on a plane to sort it out. And there has been controversy aplenty – though admittedly, virtually the only times the school has been in the news has been for bad news seized upon with glee, rather than for achievements.

In March 2007 the school was accused by concerned parents of making “a reformatory look like a holiday resort”, according to News 24, with parents restricted to one visit a month for two hours at a time. The school’s executive head John Samuels was quoted at the time as saying that “If there’s too much movement on the premises at the weekend, it disturbs the school spirit”. The school also defended the rules on the grounds of safety – an unfortunate line to take, in light of the events of October of the same year, when a dorm matron in the school was accused of sexual assault and violence against students. Winfrey was praised for her handling of the situation, which involved flying to the school to meet parents and allegedly giving students her private phone number.

In 2009 seven pupils were allegedly disciplined for offenses relating to “sexual misconduct”. Then in 2010 there was a defamation lawsuit brought by a former headmistress who Winfrey had accused of performing poorly, subsequently settled out of court. The year 2011 brought another headline-hugging scandal when a dead baby was found in the bag of one of the school’s students.

But problems like these are not unique to Oprah’s school – it is simply the case that so high-profile a benefactor inevitably attracts more attention to the institution than would otherwise be warranted. Now there’s finally a cut-and-dried good news story: the matriculation of Oprah’s first class of 72. Or is there? Media outlets still managed to find a way to put a slightly sinister spin on the news, with the Sowetan writing that one student “could not hold back her excitement of going out into the world”, and quoting another as saying “I felt like I was in prison sometimes”. But facts are facts: all students are expected to pass with university exemption, with the current headmistress, Anne van Zyl, quoted by the Times as saying that 95% of them would be the first in their family to attend university. It is also reported that more than a dozen have received full scholarships.

As time wears on, the novelty of a celebrity funding a school will hopefully wear off, and allow the institution to be assessed on the same set of outcomes as other schools. No doubt critical eyes will still be on the 72 matriculants in the next few years, however, assessing whether Oprah’s investment has “paid off”. It’s hard not to pity the students for that additional pressure. For the likes of Mpumi Nobiva, however – an Aids orphan now on her way to university in North Carolina – the fact remains that Oprah’s benefaction has opened doors that might never have been available to her. DM