Meet George, all around swell guy

Meet George, all around swell guy 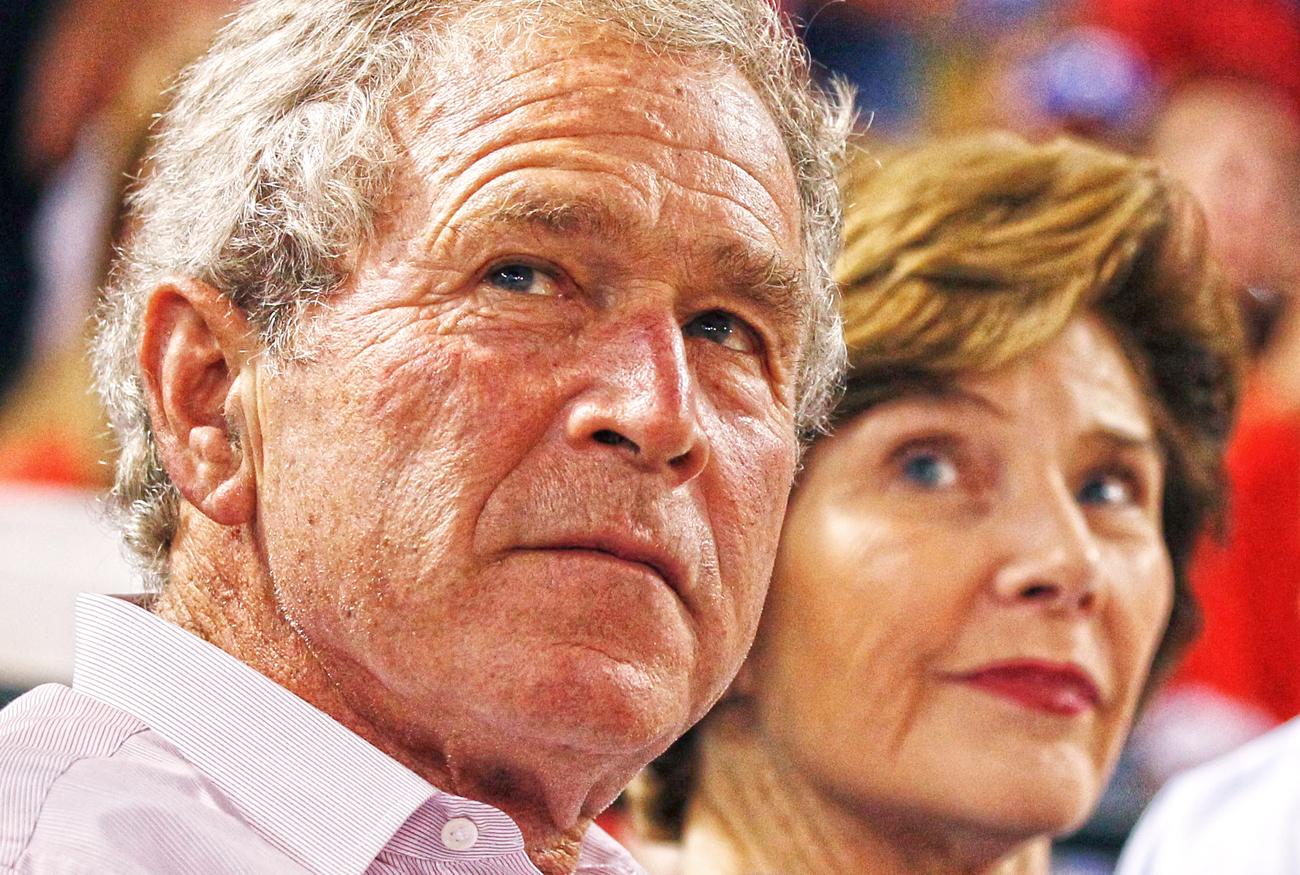 For that wonderful man who gave us the war on Iraq and the hunt for those illusive weapons of mass destruction, getting the world to hate him was the easy part. With his memoirs penned and a motivational speaking career underway, George W Bush needs to do the impossible. Get people to love him. That’s why he’s taking a sojourn to Africa, and will be arriving as the continent’s patron saint. (Heaven help us). By MANDY DE WAAL.

What do you do when you’ve become one of the most hated American presidents in the world? First you run back to Texas as quick as you can because Rick Perry’s holding fort there and God only knows he’s your kind of man. Besides, the Texans still love you, and you can always count on a standing ovation at Arlington when you throw the first pitch at a Texas Rangers game. Unlike that unruly crowd at Nationals Park in Washington DC who booed you when you threw the first pitch for that baseball season opener.

Back at the ranch, in that state where good Christian folk still understand the sacrifices presidents have to make to protect and serve, you write your memoirs. You give the world a picture of the presidency from your perspective and don’t pull the punches as you lay bare your struggle with that demon called alcohol, and detail the boundless faith that enabled you to triumph over it.

The book is about decisions, and how decisions are not made alone. But before you get to that war that caused all the trouble, you write about the good decisions you made for education and stem cell research. Of course there’s much to say about the horror and heroism of 9/11, that long shadow that hangs over America and seldom fails to evoke patriotism. Once you’ve softened up your readers, you explore the hardest decision any president can make, which is of course deploying US troops in combat.

Just before the book is published, you step up to the podium again, this time as a motivational speaker, with gigs scheduled in cities like Fort Worth and San Antonio, which have something in common. Ah yes. They’re all in Texas. You become part of a Get Motivated road show that features other “mega-watt superstars” like Laura Bush (Republican), General Colin Powell (Republican) and Rudy Giuliani (Republican). Here you talk about the more trivial moments in the White House, like selecting an optimism inducing carpet, before inspiring everyone by telling them: “popularity is fleeting… It’s not real.”

There is still a lot to be done to soften your image. So you hold hands with that Democratic President, who really did have a disgraceful exit from the White House, to save Haiti (after, not before the earthquake). However you must do more because it’s never enough when you left the Oval Office with a 22% approval rating, and you still can’t go to Switzerland because those damn human rights groups threaten violent protest.

But you need more. To radically reinvent yourself, you need the mother of all spin doctoring opportunities and what could be better than saving (fly-eyed) Africa. It did wonders for Bono – just imagine what it could do for you. Particularly if you go to Africa to encourage people to continue the fight against HIV/Aids and salute the continent’s people for the remarkable work they’ve done over the past year to address poverty. (But whatever you do, don’t mention the words “deficit” or “recession”, and try to remove that weird grin off your face when you’re touring through Tanzania, Zambia and Ethiopia and have photographs taken of yourself with Aids orphans.)

Don’t forget that this is a big spin opportunity and you (and the wife) will be able to talk about The George W Bush Institute and how it focuses on “education reform, global health, human freedom, and economic growth” to “unleash human potential”. You’ll also be promoting The George W Bush Institute’s Pink Ribbon Red Ribbon® initiative, which will save women from cancer when you’re not saving Africans from Aids and poverty. (And get some sleep on the way over, as you know, saving the world’s hard work.)

You’ll only be there for five days, from 1 December to 5 December, so remember to pack your disposable latex gloves, your personal blood transfusion kit, and whatever you do, don’t drink the tap water while you’re there. But most of all never, ever forget that you can’t go to Malaysia. Not even by accident.

If you thought Washington DC was bad, you don’t want to know about Kuala Lumpur (which isn’t the name of some strange African monkfish caviar, but the capital of Malaysia). They’ve just held a mock war trial tribunal there, and you and your good friend Tony were the star attractions. The clever Mahathir Mohamad (the longest serving former Malaysian Prime Minister who’s short on diplomacy and big on trouble making) set up a symbolic tribunal and found you and Blair “symbolically” guilty of “crimes against peace”  because of the Iraq war, and that’s just the beginning. Next up they’re bringing symbolic charges of war crimes against you.

Don’t fret, though. Ethiopia’s cool. You’ll love the regime there, particularly the way they handle the media, and you’ll be back in Texas almost as fast as you can say “global war on terror” or “Dick Cheney/Condoleeza Rice”. And as you know in that country (oops, state) where Perry’s king, the sun is always shining, the grass is green, the cattle are fat and the people still love you. DM