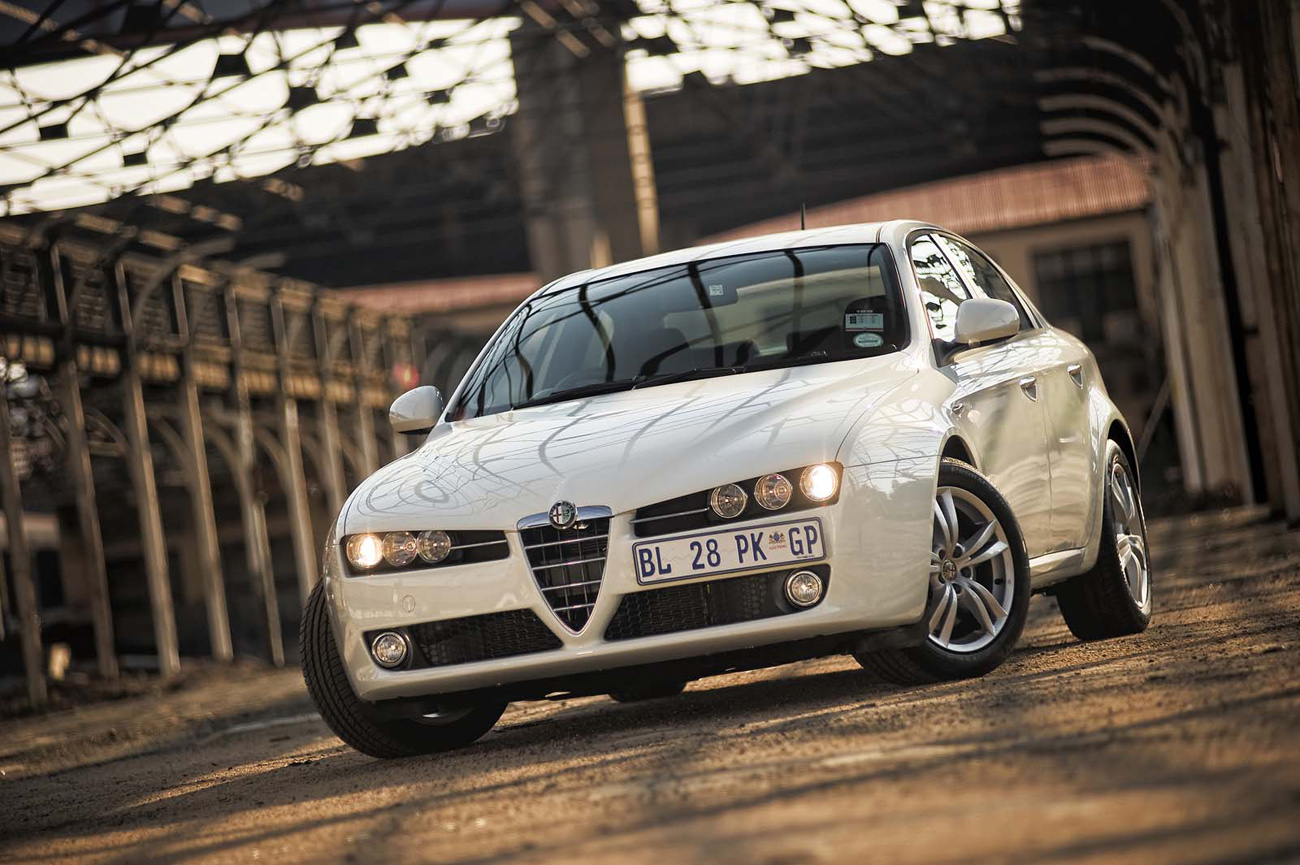 We’ve been awaiting the arrival of a new sedan from Alfa Romeo for a long time now. But despite much talk and rumour-mongering, the highly anticipated Giulia (as it is expected to be called) has yet to make its appearance. Which leaves the sedan mantle squarely hanging on the shoulders of a somewhat battle-weary 159. DEON SCHOEMAN drove the latest, mildly dusted off version ...

What does the Alfa Romeo 159 have in common with the now defunct Citi Golf? More than you’d think, actually. Both cars were penned by the legendary Giorgetto Giugiaro. And much like the Citi Golf used to do, the 159 continues to soldier on past its sell-by date.

In the continued absence of the 159’s rumoured Giulia successor, Alfa has had little choice but to keep on sprucing up the existing sedan. The result is the 159 1750 TBI Progression. Loyal Alfisti will immediately recognise the 1750 moniker as one that is not only integral to some of the Alfa greats of the past (like the chunky Berlina and the evocative GTV). But the badge also graces what is arguably one of the best modern Alfas ever: the new-generation Giulietta.

It’s the first time the 1750 nomenclature has been applied to the 159, though, and it also marks a number of other changes to the range. These include a choice of the new 1750 and  the previous GT’s 3.2-litre V6 engines, an all-wheel drive model, and a number of detail changes to the exterior and the interior. There’s also a sporty Ti version, complete with black 18-inch wheels and black detailing, offered on both the  1750 TBi and 3.2 V6 models.

What hasn’t changed is the styling. Giugaro has always displayed a keen eye for aesthetics and the 159 still has a sharp and tailored look, despite being six years old. The sheet metal appears tightly stretched over a wedge-shaped profile that links a keen, tapered nose to muscular haunches.

The result is a shape that looks more compact than it is and exudes an unmistakably athletic demeanour. But nothing can hide the fact that, in styling terms, the world has moved on.

While new-generation Alfas like the Mito and the Giulietta look rounded and voluptuous, the 159 is dapper and edgy. The narrow front grille is home to dual sets of three, round headlights, while the large, central Alfa triangle still proudly dominates. Hungry lower air intakes add further visual aggression. By current standards, the 17-inch wheels on the 1750 TBi Progression look only adequate at best – it really deserves the larger 18-inch alloys fitted as standard on the Ti version and on the V6.

The short, high deck and the flared rear wheel arches are arguably the 159’s most evocative styling features, endowing the sedan with an almost crouching, primed stance. It also suggests a deep, albeit high-silled boot, as the 405-litre capacity confirms.

Those hoping for the practicality of a split rear bench seat – almost the norm on modern sedans – will be disappointed though: except for a load-through hatch good for skis, or curtain rails, there’s no way to extend the luggage compartment.

But it’s the interior that really lets the side down. The angular dashboard is a symphony in plastic, and the deeply recessed ancillary gauges (including the fuel tank meter, and a turbo boost indicator) aren’t easy to see. The seating position is too high, even at its lowest setting, and the switchgear is both plasticky and old-fashioned. That aside, visibility from the front is pretty good in all directions, and the bucket seats are both comfortable and supportive. Passive safety is comprehensively addressed via no less than seven airbags, while active assistance includes ABS brakes with EBD and EBA, as well as VDC stability control.

Standard spec is high across the range. Even this most affordable model comes with keyless entry and a start button. The same goes for dual-zone climate control, cruise control, a trip computer and a leather-trimmed multifunction steering wheel. The leather upholstery is plush, but is an added cost option on the Progression. There’s loads of space up front, and the rear isn’t too shabby either, although knee room is in short supply.

As mentioned, the biggest change to the 159 is to be found under the bonnet– although it’s not quite what you expect. The 1.75-litre unit is essentially the same as the livewire four-potter fitted to the Giulietta. However, to ensure it doesn’t steal the V6 version’s thunder, output has been reduced from 173kW to 147kW, while torque drops by 20Nm to 320Nm.

With a kerb weight of 1,430kg, that still translates into a power-to-weight ratio of more than 100kW/ton. A six-speed manual gearbox driving the front wheels makes exercising the engine a pleasure, while Alfa’s Q2 electronic LS diff is standard. The pedigreed suspension layout suggests handling pleasures, combining as it does dual front wishbones with a multilink rear configuration.

In reality, though, the picture isn’t quite as rosy. For starters, the engine isn’t as peachy as the more powerful version. Turbo lag means that straight-line starts are hesitant and require some deft pedal work to overcome. Crisper throttle response would help too.

The good news is that once it’s up and running, the Alfa feels strong and willing – as long as you keep it on the boil. Midrange tractability is impressive and the Alfa will pull like a steam train in most gears, thanks to the turbocharger’s boost. I suppose that 7.7 seconds for the zero-to-100km/h sprint isn’t bad. Nor is the 235km/h top speed. But the 159 lacks the sparkle and immediacy of the slightly lighter and more compact Giulietta.

The suspension feels more unforgiving than expected, and the car rides so low that you’ll snag a sheet of paper if you’re not careful. The steering isn’t the liveliest either. And while the leather-clad seats are comfy, they’re mounted too high, so that you end up being perched on top of them, rather than ensconced in them. Still, the 159 is happy to accept the challenge of a mountain pass or a twisty road with glee. The steering weighs up nicely and there’s plenty of grip from the front wheels. Understeer is mild and only emerges when ploughing hard into a corner.

In fact, giving it stick in mid-corner will see the Michelins pulling positively, and the car toeing the line more resolutely as the Q2 diff’s assistance comes into play.

Like a true Alfa Romeo, the 159 1750i is very much an enthusiast driver’s car and, piloted with vigour, its dynamic rewards are compelling enough to make you forget the car’s shortcomings – a characteristic that has kept Alfa fans loyal for decades and has probably saved the brand from extinction in the process. It’s a feather in Alfa Romeo’s cap that the 159 remains a viable proposition. It’s still a distinctive beast, with good reserves of power and torque. The latest changes add higher spec and a revised cost structure.

But nothing can hide the fact that it is an older-generation car, and one that deserves to be retired gracefully. Given the eurozone’s economic woes, and the quagmire in which Italy, in particular, find itself, we can only hope that the new Giulia doesn’t become an austerity measure casualty. DM