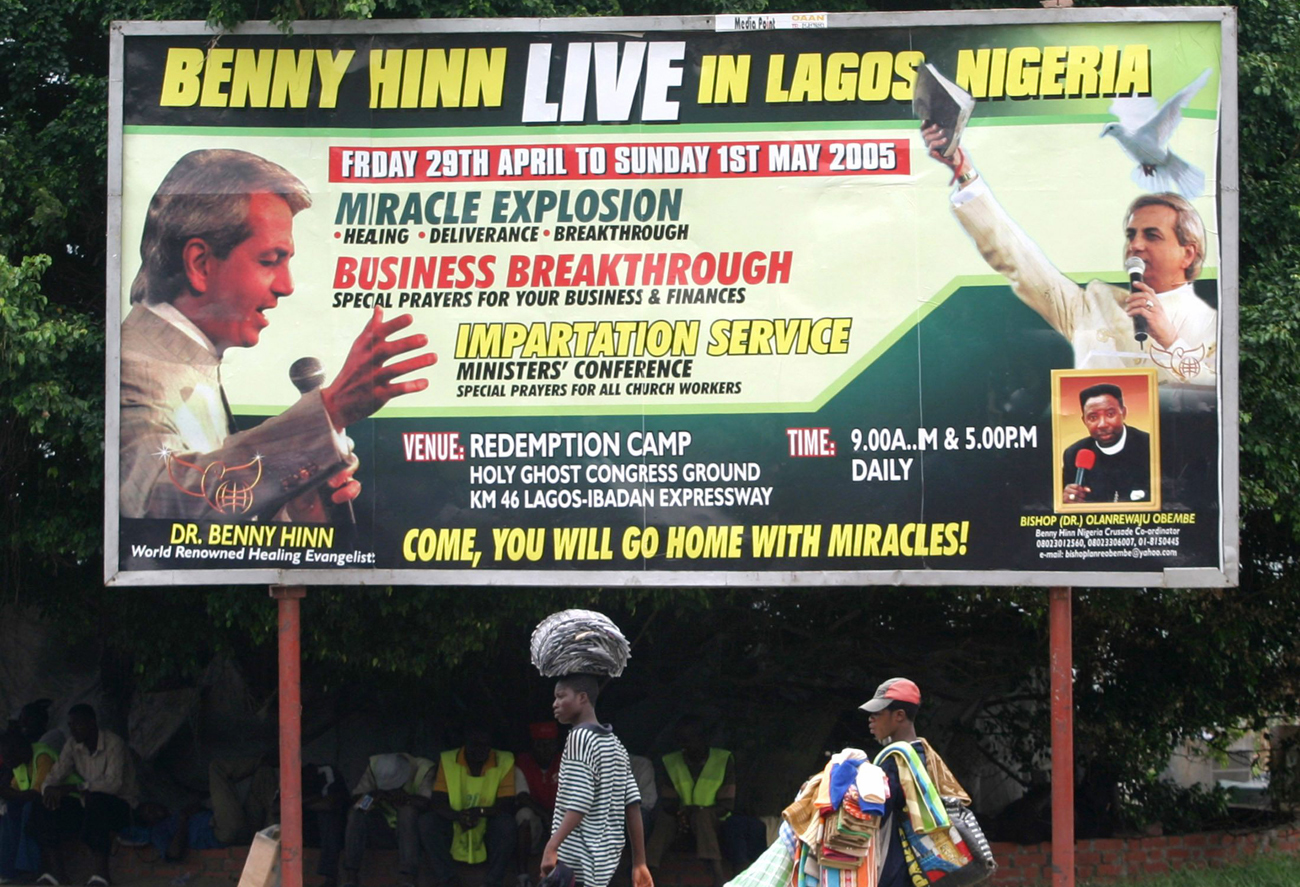 Evangelicals, Charismatics, Happy-Clappies, Ecstatics – call them what you will, they’re now more than 10% of Africa’s population and starting to flex their political muscles. This is Christianity on steroids, fuelled by devotion to God, the promises of better things to come, and just a little bit of American stardust. But who’s leading the prayers? By SIMON ALLISON

The signs of the Christian revival in Africa are hard to miss. In Nairobi, billboards for churches compete with mobile phone and beer adverts, while Zambia’s national TV broadcasts healing sessions where witnesses “testify” that she who was blind can now see. This is the age of Africa’s evangelicals, whose brand of religious fireworks coupled with a powerful self-improvement doctrine is proving irresistible to Africans in their millions. One hundred million, to be exact.

Joe Imakando, head of Lusaka’s Bread of Life Church, and president of the southern African region of the Association of Evangelicals in Africa (AEA), explained the appeal of evangelicalism in an interview with iMaverick. “We share a message which appeals to people,” he said. “It is spiritual, but also looks after the whole person. Africans are looked upon as backward people without capacity to be anything in life. We preach the message of Jesus Christ, but we also motivate them and tell them they can excel in life.”

The AEA, which is the umbrella body for Africa’s evangelical churches, has 100 million members, making it one of the largest civil society organisations on the continent. The AEA’s mission statement is “to mobilize and empower evangelical churches and agencies for total transformation of Africa through evangelisation and effective discipleship”. On the surface, there’s nothing wrong with that, if you’re happy to ignore the rather sinister overtones of the phrase “total transformation”. But it does raise the question of just how much influence evangelicals in Africa have on the politics of the continent, and how they are going to use it.

“We have a lot of clout [politically],” said Imakando. “We can speak for Christians, for the poor, for the underprivileged…We have a big following and we make politicians aware. They need votes and they know we have votes.” He was at pains to stress that the church does not tell its congregation for whom to vote – not directly anyway. It’s more subtle than that. “We don’t mention names, but we educate on the qualities of a good leader.” The implication is clear: politicians better be nice to the church or the church might just start emphasising qualities which the politician in question does not have.

Africa’s not the only place where evangelicals are growing in power. The political swing to the right in US politics over the last decade has been underpinned in large part by the corresponding rise and influence of America’s evangelical churches and superstar pastors, whose apparent disdain for politics (“render unto Caesar that which is Caesar’s”) is matched only by their obsession with political flashpoints like abortion and homosexuality. The relationship between the religious right and politics in America is not a well-kept secret. In the last presidential election, both candidates agreed to be questioned on their religious views by Rick Warren, an unprecedented coup for a church leader. But Warren is no ordinary pastor: author of A Purpose-Driven Life, the best-selling book in American publishing history, and head of the 22,000-strong Saddleback Church in California, he’s a cult figure in religious circles with the political clout to match. No wonder then that Barack Obama chose him to deliver the invocation at his inauguration. And as American politics grows more conservative, so his influence, and that of like-minded evangelicals, is growing. The Tea Party movement in particular has a significant, if not total, overlap with the religious right.

So Africa better watch out – where America goes, we’re likely to follow, especially given the cosy links between evangelical figures on both continents, and the evangelical influence on African politics. US evangelicals, both mainstream and, perhaps more worryingly, the more peripheral figures who preach crazy things like a homosexual conspiracy to take over the world, play a disproportionately large role in the African evangelical movement.

Take George Bush’s signature Pepfar programme to address HIV/Aids, perhaps his strongest legacy. This is said to have been inspired by a prominent evangelical advisor familiar with problems on the continent. Or the controversial anti-homosexuality bill introduced in Uganda, which if passed would have prescribed the death penalty for sodomy. The bill was directly inspired by a bizarre conference in Kampala starring two controversial American evangelicals, Scott Lively (a Holocaust denier) and Dan Schmierer, who argued that homosexuals are conspiring to take over the world, are destroying the fabric of society and need to be “cured”.

Another example is the unusually close relationship between Rwanda’s President Paul Kagame and Rick Warren. Warren hosted a workshop for government officials in 2005 and boasted on his website of making Rwanda the first “Purpose-Driven Country”. He also enjoys very close links with the Ugandan First Lady, Joyce Museveni, they recently announced plans to make Uganda the second “Purpose-Driven country”. It’s not exactly clear what the non-evangelical citizens of either country thought of being co-opted into this religious marketing exercise.

The involvement of American figures in Africa is nothing new. In a previous epoch, American evangelicals were loud in their support of white-led regimes in Africa, particularly Ian Smith’s Rhodesia and apartheid South Africa. Prominent among these was Pat Roberts, whose Christian talkshow The 700 Club remains widely syndicated throughout Africa.

Of course, bundling all these Americans together under the banner of “evangelicals” is simplistic and all the figures mentioned occupy different spaces on the religious right continuum (although that’s a scary place to be at the best of times). But this nuance is sometimes lost in translation: “Indeed, Africans do not distinguish between moderate evangelicals…and hard right figures like Scott Lively. For them, the term ‘evangelical’ conveys the notion of Protestant Christianity as a whole, without the substantive distinctions made by US religious groups,” wrote Zambian Kapya Kaoma.

Imakando denies the US religious right has much political impact on the continent, ascribing the popularity of American evangelical figures to the appeal of the “Prosperity Gospel” which some of them preach. At its essence, this is the idea that the more devout you are, the richer you will become – spiritually, yes, but also materially. “A lot of people are caught up in that coming from areas of poverty,” he said.

But with popular appeal comes political power. And with evangelicals representing at least 10% of Africa’s population, they will be a force to be reckoned with in the coming years, particularly as they begin to realise just how strong they are. It remains to be seen just how much influence the US religious right will have on this process, but if early indications are anything to go by, it’s likely to be significant, especially if the next US administration is Republican. This is bad news for LGBT rights campaigners and pro-choice activists. DM