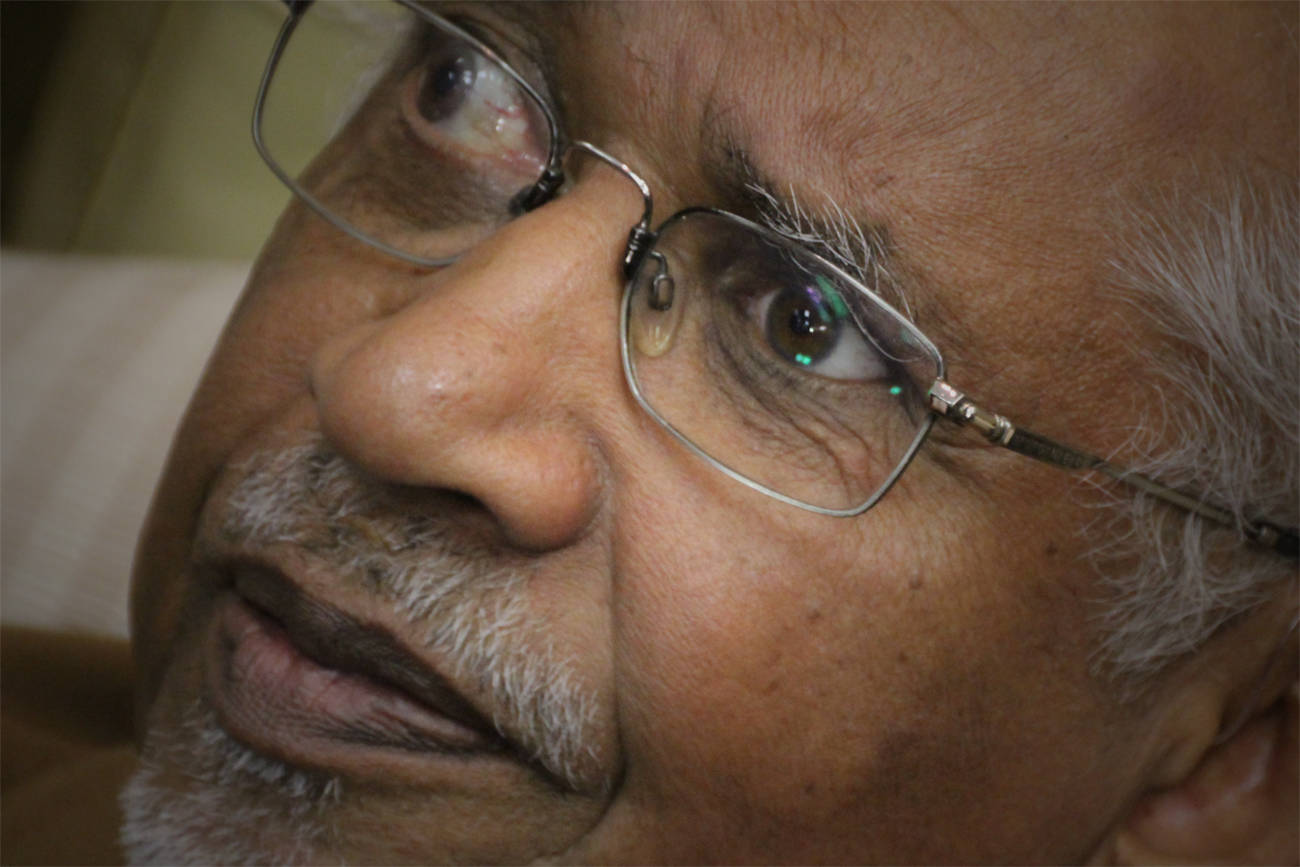 Over the last week, the fracas surrounding Mac Maharaj has been getting a tad repetitive. Journalist after journalist asked him directly: “Did you lie to the Scorpions?” and time after time he refused to answer the question, citing his rights under the NPA Act. Now that City Press has dug up a 2007 story about the matter – including actual transcripts of the 2003 Scorpions inquiry – it seems that Maharaj did, indeed, fail to tell the truth. He's still trying to spin the story as Mac vs the media, though. By THERESA MALLINSON.

Presidential spokesman Mac Maharaj has spent the last week on the counterattack, after damaging stories about his alleged involvement in the arms deal were published in the Sunday Times – and not published in the Mail & Guardian. The information that the M&G chose not to publish related to his 2003 investigation by the now-disbanded Scorpions, and was protected from disclosure as it was part of a Section 28 inquiry under the National Prosecution Authority Act. Maharaj laid charges against the M&G and reporters Sam Sole and Stefaans Brümmer, in terms of the NPA Act, and the Hawks are investigating the newspaper.

But never mind the M&G, on Sunday City Press went ahead and published sections from the transcript of the Scorpions inquiry into Maharaj and his wife, Zarina Maharaj. Thing is, the newspaper had already published this transcript, and a story relating to it, way back in 2007 – and escaped prosecution.

In its original 2007 article, City Press reported that Maharaj and his wife had told the Scorpions, among other details, that they had no offshore bank accounts in Switzerland; and had received no money from Schabir Shaik, or his companies. However, this flies in the face of investigative work by City Press, as well as the Sunday Times and the M&G, showing that money was paid from French weapons manufacturer Thompson (now Thales) into Zarina Maharaj’s Swiss bank account, via none other than Shaik.

Maharaj, meanwhile, speaking to the National Press Club on Tuesday, said: “I have maintained the view that I have not been involved in any bribery, corruption, and in the awarding of those two tenders. That’s my consistent position. It doesn’t change.” The tenders refer to the R2.5 billion N3 toll road tender; and the R265 million credit-card driver’s licence tender, both of which were awarded when Maharaj was the minister of transport. A company owned by Shaik was part of the consortium that won the former tender, while Thales benefited from the latter.

Throughout the last ten days, Maharaj has consistently refused to answer the question of whether he lied to the Scorpions. It’s probably advisable that he doesn’t comment on this unless or until he is forced to – lying to a Section 28 inquiry is a criminal offence, and he could face 15 years in prison.

Of course, there’s also the matter of criminal charges that could be laid against City Press. “We went through a process of deep ethical and legal thinking about it. The obvious thing to point out was: hey, this has been in the public domain and has been for four years,” City Press editor Ferial Haffajee told iMaverick. “The biggest public interest is that Maharaj may have lied to the Scorpions.” City Press had not yet heard from Maharaj’s lawyers on Sunday night.

The newspaper reported that Maharaj’s attorney, Rudi Krause, said on Saturday: “I can give you the assurance that should you even republish the 2007 article, we will lay a criminal charge against you and the newspaper… Should you publish now, it will serve to confirm that you or the newspaper are still in the unlawful possession of the documentation.” However, when iMaverick spoke to Krause on Sunday night, asking whether Maharaj would press charges, he stated: “I haven’t consulted with him (Maharaj), so I cannot answer that question at the moment.” Krause indicated that he would not be consulting with Maharaj on Monday either, and it would be best to contact him on Tuesday for further comment.

But a potential case against City Press doesn’t have quite the same sting as the case against the M&G filed last week, considering we’re now aware that the information was already in the public domain. On that note, this new twist also has implications for Maharaj’s case against the M&G. Hawks spokesman McIntosh Polela told City Press on Saturday that the fact the material had been published previously: “will have an impact on our investigation because then the information will already be public knowledge”.

While the republication of the 2007 story is certainly not making life any easier for Maharaj, the M&G has also ended up with some egg on its face. If the newspaper had been aware that the transcripts of the Scorpions interview had been previously published, it’s not a stretch to conclude it just may have decided to go ahead and publish an unredacted story last week.

“We’ve said all along this information was in the public domain, which we included in our letter to the National Prosecuting Authority. This just highlights the absurdity of the criminal investigation by the Hawks currently under way into the M&G,” the M&G Online quoted editor Nic Dawes as saying.

Meanwhile, on City Press’ decision to republish the story, Haffajee said: “It took some digging to find it, and some archival research; and then we were thinking quite hard about whether to publish it or not.” In the editorial comment accompanying City Press’ front-page article, explaining why the newspaper had chosen to publish the story, it stated: “Why now? The details were exposed to millions years ago, rendering the idea of confidentiality moot. Yet the state has now put its top cops on to this inquiry. The publication of the inquiry is in the public interest because it provides some of the answers as to how arms dealers and multinationals began corrupting our institutions, systems and leaders.”

Maharaj referred Daily Maverick to Krause for questions regarding possible legal action (see above), but had a few preliminary comments of his own. “Firstly, it’s remarkable that they (City Press) are rehashing what they republished in 2007. And the question arises: why are you rehashing it now? There’s nothing new in it,” he stated. Sure, there’s nothing new in it, but given the impending Arms Deal commission of inquiry, the information certainly gains renewed relevance.

“Secondly, they make the categoric admission that they broke the law then, and they are breaking it now again,” Maharaj continued. “Again the question arises: what’s their agenda? Nobody is asking that question. It’s as if… they want to be painted as victims, and they want to make a hype that this is a threat to media freedom. So the agenda seems to be: ‘we don’t care how we mobilise opinion, no matter how emotionally and unfairly; as long as we mobilise against the (Protection of State Information) Bill, all is fair in love and war’,” Maharaj said.

Maharaj went on in the same vein: “The one interview when you wrote about me, you wrote in the same tone,” he said. “Put the best case for the media, consciously. For the rest… I’m intrigued. I think Stephen Grootes has written fairly fairly, but not one has chosen to put my case as put by me. And it was not long. But you deny me and the public my case in my way. Everything you do is to take some aspect of what I’ve said and to write your story.”

There’s two issues here: firstly, the one that Maharaj is quite happy to talk to the broader debate around media freedom, and the legal aspect of publishing information that was given to a Section 28 inquiry; and secondly, the more specific question he won’t address: did he or did he not lie to the Scorpions?

The way Maharaj has spun this story is to turn it into a Mac vs the media battle. And given the controversy surrounding the so-called Secrecy Bill, the media is going to write about it within the context of general principles of access to information, considering their pertinence to this case. But Maharaj’s insistence on continuing to point fingers at the media is not doing him any favours – it’s shown up as an attempt to deflect attention from the main issue of his own conduct. However much he wants to blame the media for the methods they’ve used in getting the story, the primary story here relates to his own alleged involvement in the arms deal. And the media’s not going to stop asking questions about that one. DM