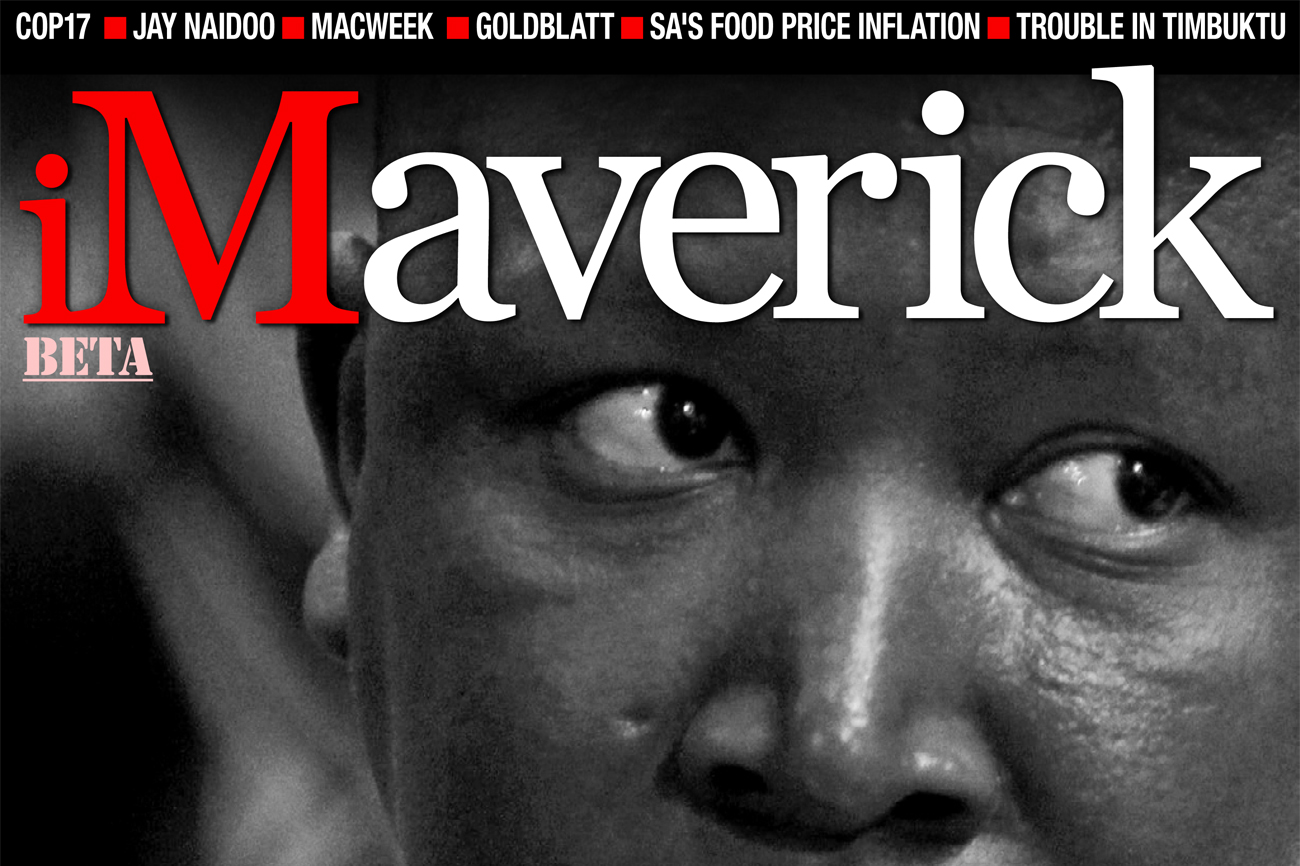 When former IMF head Dominique Strauss-Kahn was accused of rape, his supporters claimed it was part of a political conspiracy to ensure he wouldn’t run for president. A new report in the New York Review of Books suggests that this theory may not be so outlandish. By REBECCA DAVIS.

In case you hadn’t heard, an important two-week international meeting on climate change begins in Durban today. Few view the 17th Conference of the Parties, or COP17, with much optimism – after all it’s hardly Test cricket – but it is a big deal. Trust us. By KHADIJA PATEL.

Just more than 20 years ago, South African mining magnate and its foremost futurist, Clem Sunter, presented his famous high-road-low-road scenario to a country still under the jackboot of apartheid. Seems we, and indeed Africa, haven’t learnt much since then.

SIPHO HLONGWANE: BUT WAIT, THERE’S MORE: THE ‘TRANSFORMATION IN THE JUDICIARY’ IS BACK AGAIN

Last week, presidential spokesman Jimmy Manyi dropped something of a bomb in the middle of a post-Cabinet meeting briefing. Apparently Constitutional Court decisions are going to be “assessed” by a reputable research institution, for the benefit of the Cabinet, one presumes. He has left the details up to the Justice Department to explain, but it does seem like we’re about to shake the rocky and narrow ground between judicial independence and transformation once again. Given the current administration’s record on the subject, I’m not filled with confidence.

COSATU’S VOTE OF NO-CONFIDENCE IN COP17

COP17 starts on 28 November. Cosatu has had words about the entire process. It basically has no faith in it because the big boys and gals aren’t coming to the table. But also, Cosatu claims it is a talk shop for heads of government, with civil society getting little chance to contribute to the proceedings. By SIPHO HLONGWANE.

Julius Malema was quoted saying, “I’m finished” in the Sunday Times. What Malema says, what he means, and what he does next can be three distinct concepts. But this is such a strong quote it does appear to mark a real admission of defeat. what now? And more interestingly, what does this mean for the ANC Youth League?

Over the last week, the fracas surrounding Mac Maharaj has been getting a tad repetitive. Journalist after journalist asked him directly: “Did you lie to the Scorpions?” and time after time he refused to answer the question, citing his rights under the NPA Act. Now that City Press has dug up a 2007 story about the matter – including actual transcripts of the 2003 Scorpions inquiry – it seems that Maharaj did, indeed, fail to tell the truth. He’s still trying to spin the story as Mac vs the media, though. By THERESA MALLINSON.

Photographer DAvid Goldblatt devoted many years to chronicling the iniquities of apartheid and bigotry. His decision to decline the order of Ikhamanga reveals the vetern lensman has lost none of his appetite for highlighting injustice. By REBECCA DAVIS.

On 23 November, StatsSA released the consumer inflation figures for October. They show that headline consumer prices increased year-on-year by 6% for the average household. Sharp inequalities in income and spending render most averages meaningless. Perhaps it’s time for a more nuanced approach to policy based on the inflation rate. By PAUL BERKOWITZ.

Timbuktu is neither mythical nor exotic. It exists – a harsh, cruel and ugly reality, as the South African citizen kidnapped there on Friday found out. Timbuktu’s romance has long gone, its exoticism extinguished by problems all too modern and all too familiar. By SIMON ALLISON.

UN CALLS FOR RESTRAINT ON EVE OF CONGO VOTE

International organisations appealed for calm on the eve of Democratic Republic of Congo’s presidential election, after a run-up that has already been tainted by deadly street clashes and delayed poll preparations. By DAVID LEWIS and JONNY HOGG.

Egyptians desperate to stop bullies and cheats stitching up the country’s first free election in decades are lining up by the thousand, cameras and mobile phones at the ready, to help monitors document abuses and expose the perpetrators. By TOM PFEIFFER and DINA ZAYED (Reuters).

YANGON: FROM STATELY CITY TO CRUMBLING SYMBOL OF ISOLATION

Myanmar’s former capital and biggest city is a crumbling monument to almost half a century of isolation and mismanagement at the hands of generals who took power in a 1962 coup and ruled with an iron first until a nominally civilian parliament opened in March this year (Reuters).

HOW LOW CAN US-PAKISTANI RELATIONS GO?

If the Nato/US relationship with Pakistan eventually spirals out of alignment, this weekend’s deadly “friendly fire” tragedy may ultimately be remembered as the starting point. By J BROOKS SPECTOR.

The Arab League approved sweeping economic sanctions on Syria on Sunday over its crackdown on protesters and the Qatari foreign minister said other powers might intervene if Arabs fail to contain the crisis. By YASMINE SALEH and AYMAN SAMIR (Reuters).

IN INDIA, A SENSE OF CRISIS FANS EMBERS OF REFORM

Prime Minister Manmohan Singh’s move to open India’s protected retail sector to global supermarket giants last week surprised critics who had written him off as a policy ditherer, but he was probably motivated by expedience rather than any reformist zeal. By JOHN CHALMERS (Reuters).

A multimillionaire Chinese developer is livid at Iceland’s rejection of his plan to build a sprawling resort, saying it reveals western “hypocrisy and deep prejudice”. By TERRIL YUE JONES (Reuters).

WHAT DEFINES OUR PERCEPTION OF TIME? DAVID EAGLEMAN MAY JUST HAVE AN ANSWER

Ever wished you could slow time down or make it speed up? Scientist and New York Times bestselling author David Eagleman may not have discovered a potion that enables people to change their experience of time, but his research on brain time is helping humanity understand the neural mechanisms of time perception. By MANDY DE WAAL.

MISSING. ONE MAVERICK WRITER. MIGHT BE IN FIFTH DIMENSION

UNIDENTIFIED FRYING OBJECT: WHAT THE HELL IS IN CHINA’S DESERT?

Prepare for paranoia. Deep in China’s Kumtang Desert, a series of strange patterns have emerged. Easily viewed on Google Earth—a program that has made it difficult for me to sleep at night—the structures have caused a flurry of discussion on the interwebs. Mining complexes? Alien landing pads? It’s anyone’s guess. By RICHARD POPLAK.

THE ROLLING STONES AT 50: WHO’S PLANNING NEXT YEAR’S PARTY?

July 2012 will be 50 years since the Rolling Stones first performed at the Marquee Club in London. After a four-year hiatus, Keith Richards, Charlie Watts and Ronnie Wood are back jamming together in anticipation of the event. As for Mick, seems he’s still sore at Keef for writing all that stuff in the book. Still, if the front man shows up, it could be one of the biggest parties in history. By KEVIN BLOOM.

Gary Speed, the manager of the Wales national team, was found dead on Sunday at the age of 42, the Football Association of Wales (FAW) said in a statement. By MIKE COLLETT (Reuters).

Barbarians coach Graham Henry, fresh from leading New Zealand to World Cup glory, said his side had been beaten by a top-class Australia team. By PLANETRUGBY.COM.

Mark Webber led a Red Bull one-two in the Brazilian Grand Prix on Sunday to celebrate his first victory of the year in the last race of the Formula One season. By ALAN BALDWIN (Reuters).

The United States have won the Omega Mission Hills World Cup, their 24-under total giving them a two- shot win over Germany and strong-finishing England. By GOLF365.COM.

Australia registered an emphatic 60-11 win over the Barbarians in their Killik Cup clash at Twickenham on Saturday. By PLANETRUGBY.COM.