The Rolling Stones at 50: Who's planning next year's pa...

The Rolling Stones at 50: Who’s planning next year’s party? 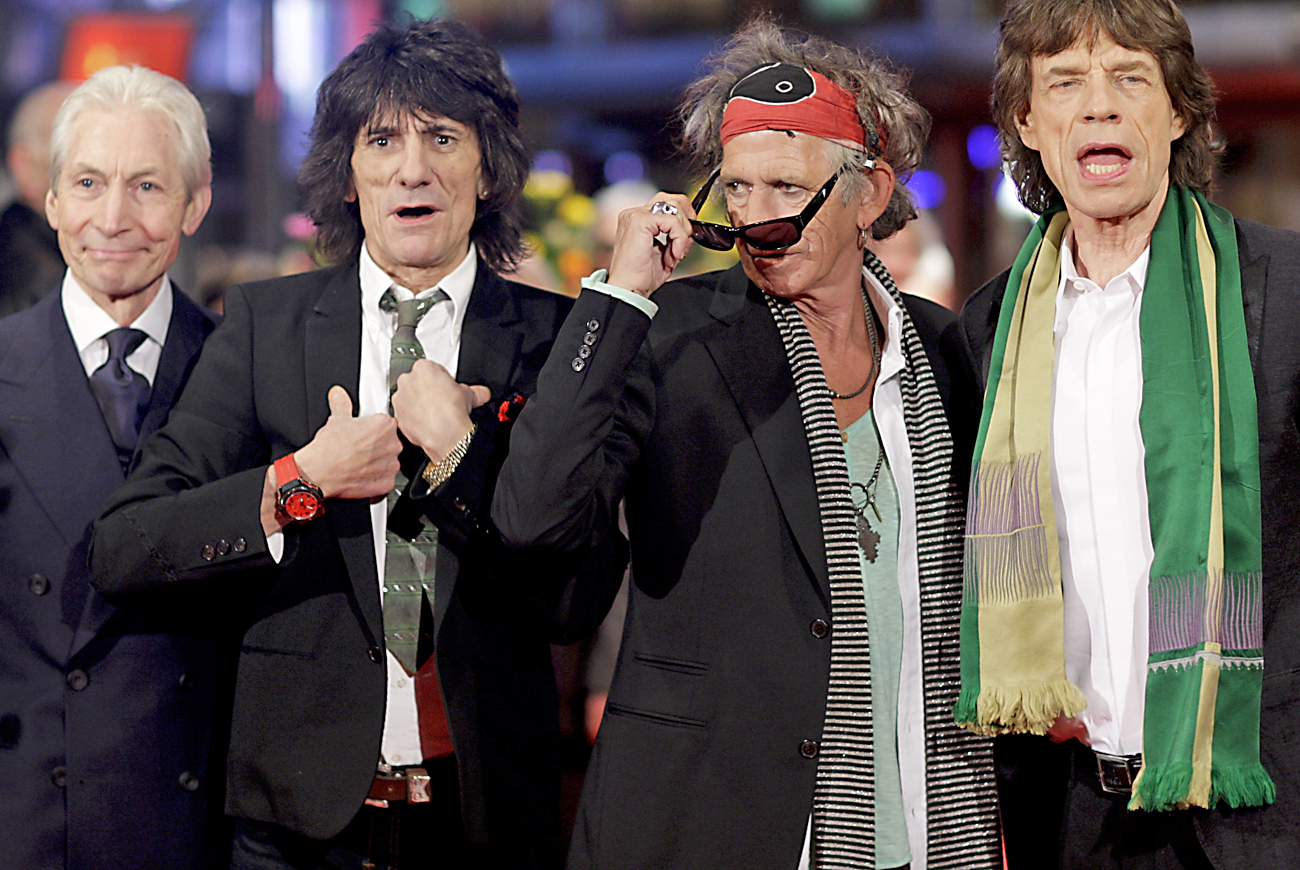 July 2012 will be 50 years since the Rolling Stones first performed at the Marquee Club in London. After a four-year hiatus, Keith Richards, Charlie Watts and Ronnie Wood are back jamming together in anticipation of the event. As for Mick, seems he’s still sore at Keef for writing all that stuff in the book. Still, if the front man shows up, it could be one of the biggest parties in history. By KEVIN BLOOM.

In November 1970, Lester Bangs, probably the most influential rock critic of all time, wrote a review of the Rolling Stones’ live album Get Yer Ya-Ya’s Out! The opening paragraph was a screed against the predictable (if professional) competency of Big Name live concerts, and was peppered with just about every synonym in the thesaurus for the word “boring”. He explained how the Band and Creedence Clearwater Revival performed their sets to such perfection that he fidgeted, how Crosby, Stills and Nash almost had him in tears they were so listless, and how he didn’t even bother showing up at that year’s Led Zeppelin gig. Which wasn’t all that surprising from Bangs – this was the man who would later say of his own interviewing style: “Well basically I just started out to lead with the most insulting question I could think of.”

Bangs wasn’t exactly the type of music journo you’d call “star-struck”. And so the closing paragraph of that now famous piece is a collection of sentences for the ages:

“The Seventies may not have started with bright prospects for the future of rock, and so many hacks are reciting the litany of doom that it’s beginning to annoy like an inane survey hit. The form may be in trouble, and we listeners may ourselves be in trouble, so jaded it gets harder each month to even hear what we’re listening to. But the Rolling Stones are most assuredly not in trouble, and are looking like an even greater force in the years ahead than they have been. It’s still too soon to tell, but I’m beginning to think Ya-Ya’s just might be the best album they ever made. I have no doubt that it’s the best rock concert ever put on record. The Stones, alone among their generation of groups, are not about to fall by the wayside. And as long as they continue to thrive this way, the era of true rock and roll music will remain alive and kicking with them.”

Man! How can you not see the prophecy in that? In the ensuing 40 years – say it to yourself slowly, so it sinks in, “FOR-TY YEARS” – the Stones would release a string of eight consecutive studio albums reaching number one in the United States (beginning with Sticky Fingers, the first under their own label, which contained the classics “Brown Sugar” and “Wild Horses”), perform on a flatbed truck rolling down 5th Avenue in Manhattan, get panned as “decadent, aging millionaires” when punk rock hit the scene in the late ‘70s, hit back in 1981 with their biggest and loudest US tour to date, suffer the death of their collective muse and co-founder Ian Stewart months before receiving a Grammy Lifetime Achievement Award (1986), tour three continents with the massive Steel Wheels/Urban Jungle production (Guns & Roses were an opening act), return five years later with the worldwide Voodoo Lounge Tour (stretching from 1994 into 1995, at takings of $320 million it was then the largest grossing tour of all time), become the first major act to broadcast a concert live over the Internet, and beat their own world record for the highest-grossing tour of all time with the Bigger Bang Tour (from mid-2005 to mid-2007, total earnings came in at $558 million).

The above, of course, is at once an unavoidably extended and hopelessly abbreviated sentence that covers the years 1970 to 2010. But the Rolling Stones were formed in 1962, when childhood friends Mick Jagger and Keith Richards performed with Brian Jones, Ian Stewart, Tony Chapman and Dick Taylor at the Marquee Club in London.  Next year, the band will turn 50. Exclamation marks don’t even begin to cut it. And the group will almost certainly celebrate the golden anniversary with a show. According to an article in the latest issue of Rolling Stone magazine, AEG Live, Live Nation and Stones promoter Michael Cohl have already made gambits at acquiring the anniversary tour, which has the potential to be even bigger than the Bigger Bang.

Which was the last time the group played live together – at the final show in August 2007 at London’s O2 Arena. Notes Rolling Stone magazine of the resumption of rehearsals: “Following a band meeting in September [2011] at the Stones’ London office, Richards, guitarist Ronnie Wood and drummer Charlie Watts were set to convene in November to jam in London. ‘I would suggest a lot of blues in the beginning,’ says Richards. ‘That’s where the band’s roots are. We’ll start playing some Jimmy Reed stuff and some Muddy Waters stuff and then things will blossom from there. It might bore Mick to death – and that’s the idea. We’re just going to go, and you start from Day One. You’ve got the drums and a couple of guitars and you start hammering away.’”

The dig at Jagger has everything to do with the fallout over Richards’s best-selling 2010 memoir Life, in which the legendary guitarist and world champion hedonist called his longtime collaborator “unbearable,” claiming also that Jagger’s onetime partner Marianne Faithfull “had no fun with his tiny todger.” Still, of the fact that Jagger wasn’t signed up for the November jam sessions, Richards told Rolling Stone: “Mick is welcome, I’m sure he’ll turn up.”

And while Richards has said he’s up for a repeat of the Bigger Bang Tour, he doubts that Jagger is game. “I don’t know about that,” he told the magazine. “I don’t think Mick would. We’d like to be ready to be able to do it if the idea starts to happen. I’d even invite Bill Wyman (who turned 75 in October this year – Ed) and Mick Taylor back in. Why not? It’s 50 years. Everyone deserves a party.”

Seems then that the size of the party is going to depend on Jagger, ‘cos it just wouldn’t be the same without him. DM

Photo: Rolling Stones members Charlie Watts, Ron Wood, Keith Richards and Mick Jagger pose at the red carpet as they arrive for the screening of the opening film ‘Shine A Light’ running in competition at the 58th Berlinale International Film Festival in Berlin February 7, 2008. REUTERS/Hannibal Hanschke