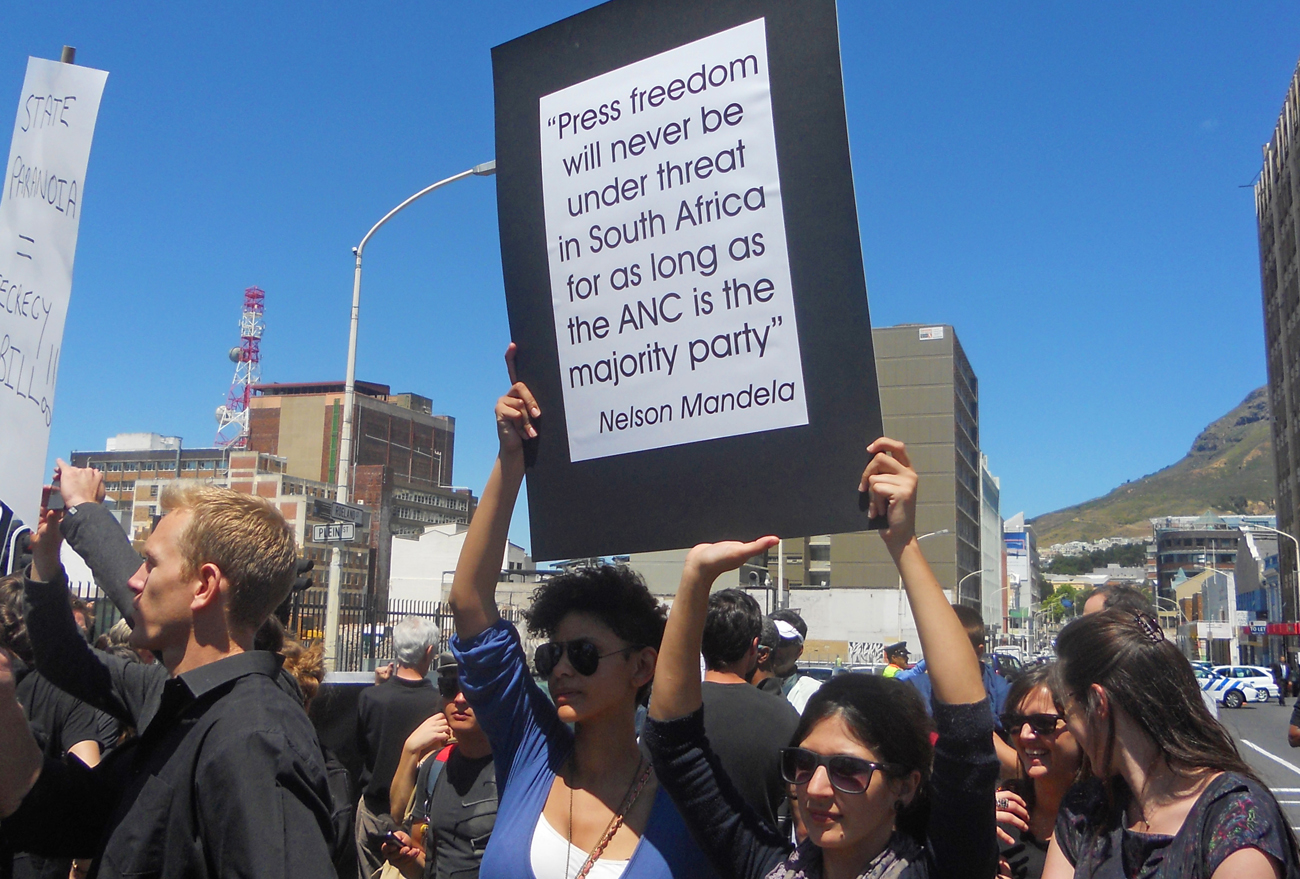 Before Black Tuesday’s Parliamentary vote in favour of the Secrecy Bill, massed opposition had warned of challenging it in the Constitutional Court. Naturally, ANC MP Luwellyn Landers is confident that it’ll pass Constitutional muster. By SIPHO HLONGWANE.

Just before the second reading vote on the Protection of State Information Bill on Tuesday, leader of the Democratic Alliance in Parliament Lindiwe Mazibuko urged MPs in the ruling party not to vote for it.

“If passed, this Bill will unstitch the very fabric of our Constitution,” she said. “It will criminalise the freedoms that so many of our people fought for. What will you, the members on that side of the House, tell your grandchildren one day?”

The ANC’s single-party majority saw the Bill steamrollered through by 229 votes to 107 (with two abstensions).

Anticipating this result Mazibuko said, “Speaker, whatever happens in this House, we will not give up the fight. We have fought this Bill from the very first day it was tabled. And we will continue to do whatever it takes to defeat those who want to silence our people. Firstly, we will take the fight to the National Council of Provinces, where we will propose amendments, including a clause to protect those who disclose state information in the public interest. If the Bill in its current form is passed in that house, we trust that the president will send it back to Parliament. Surely he will see that it is unconstitutional. But if this Bill is signed into law, I will lead an application to the Constitutional Court to have the Act declared unconstitutional.”

There is a parliamentary rule that says a Bill may immediately be referred to the Constitutional Court if a third of all MPs consent. That would need every single MP that isn’t in the ANC.

Inkatha Freedom Party MP Mario Ambrosini told Daily Maverick there could be such a move if and as soon as the Bill is passed by the National Council of Provinces and signed by the President. The only problem is that Cope has some vacancies that it needs to fill.

Not surprisingly, the chairman of the ad-hoc committee on the POIB and ANC MP Luwellyn Landers said he was confident the Bill was constitutional as it stood.

“We also support the Bill because it will bring closure to the families of people like Ahmed Timol (http://www.sahistory.org.za/people/ahmed-timol). The circumstances surrounding his murder have been classified. All the classified documents from that era remain classified because the 1982 Bill didn’t provide for a declassification vehicle. The Protection of Information Bill provides for that. If there is a request for the declassification of certain information, a committee will sit down and decide whether such information can be declassified.”

“We are not intimidated or threatened by the threat of a Constitutional Court challenge,” said Landers.

He said the Bill had not been treated fairly by the media because it wasn’t about the press to begin with. He conceded that they may have relied on the press too much to explain to the public what the POIB was all about, resulting in distorted perceptions.

Political analyst Eusebius McKaiser said the current media obsession with a Constitutional challenge to the Bill based on the absence of a public interest clause was misplaced. “The truth is that there is no Constitutional right to have a public interest clause in this particular piece of legislation,” he said. “What we’re seeing in the media is a subtext of criticism that almost suggests that if you go to the Constitutional Court, the 11 judges will say: ‘Hmmm, this clause is not here, therefore we strike [the Bill] down’.

“The court will ask itself: does this Bill infringe on a fundamental rights in the Constitution? If it does, how are those rights being limited? Are they being limited in accordance with the limitations test? So it’s not whether the [public interest defence] clause is there, but can the Bill overall be justified in a democratic society? I suspect the answer is no.”

If the Bill ultimately becomes law, it probably won’t only be opposition MPs who will rush to Constitutional Hill for a hearing. Most civil society organisations directly involved – including the Right2Know campaign and the SA National Editors’ Forum – have publicly stated they will spearhead or support a Constitutional challenge – and are as “supremely confident” as Landers of winning the day.

Judging by Tuesday’s mass walk-out of South Africa’s editors from Parliament and Wednesday’s overwhelming condemnation of the Parliamentary vote, the press will undoubtedly be waiting to claim moral victory should the Constitutional Court rule that certain aspects of the Bill fail the test, but the reasons will have more to do with countering abuse of state power and universally accepted  need to government power with transparency. These bodies are also on record as acknowledging the legitimate need to protect some genuine state secrets. DM