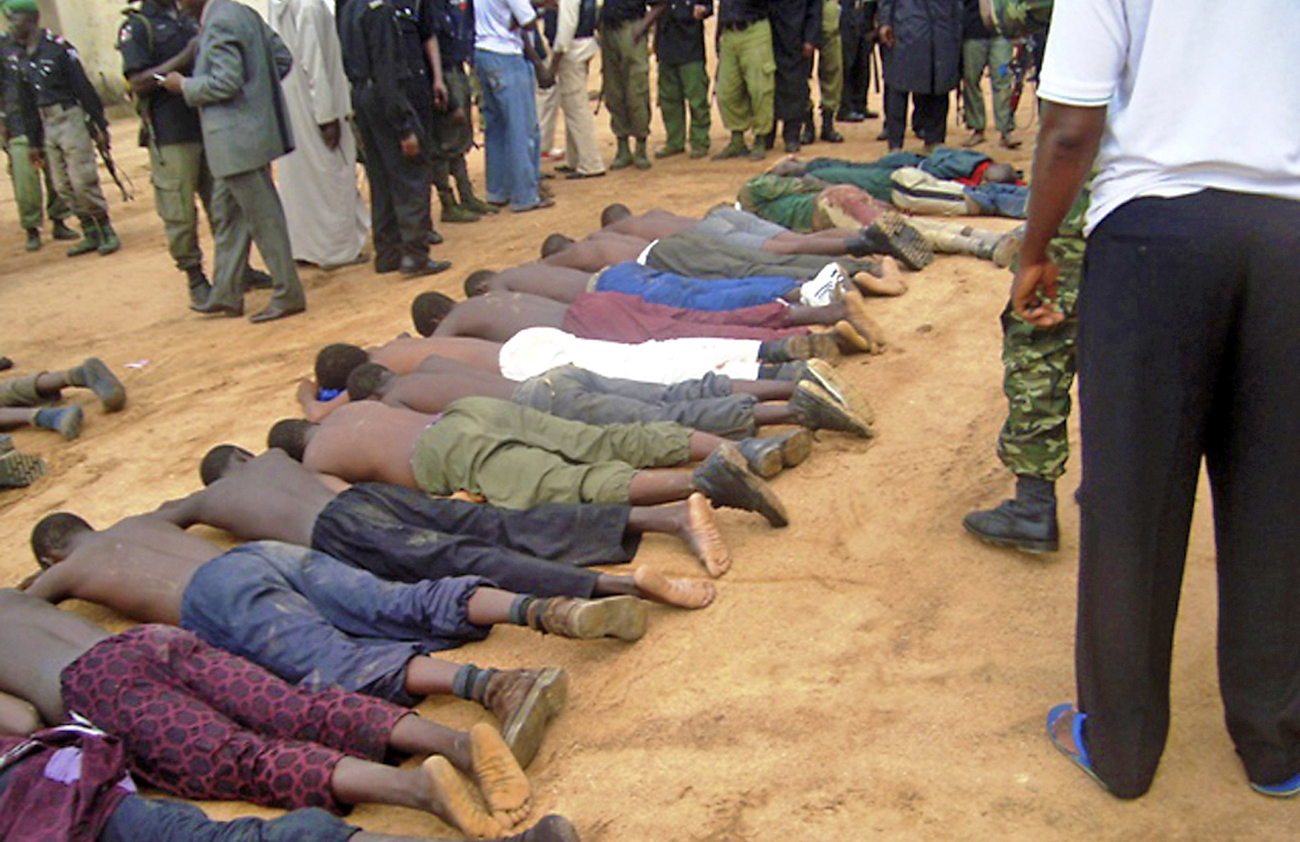 Nigerian security forces delighted on Monday in a putting a Boko Haram spokesman they captured earlier this month on public display. This spokesman made the sensational claim that funding for the militant group came from none other than politicians aligned to Nigeria’s ruling party. SIMON ALLISON explains why, in the crazy, complex world of Nigerian politics, this makes perfect sense.

Finally, some progress however slight in Nigeria’s fight against Boko Haram, the Islamist militant group that’s been wreaking havoc and violence across north-eastern Nigeria ever since April’s presidential elections. Nigeria’s state security service paraded a man who they claimed was a Boko Haram spokesman in front of media in Abuja and told the world what the man had told them. What he had said was most intriguing, and a strong pointer to what lies at the root of the Boko Haram problem. No, not al Qaeda, as the US and other regional governments have believed. And not really Boko Haram either; while its demands for the imposition of Islamic law on Nigeria certainly resonate in some areas, they were the mechanism rather than the cause of the surge in violence.

The real root of the problem lies somewhat closer to the government of Nigerian President Goodluck Jonathan, if the captured spokesman, Ali Konduga, is to be believed. Konduga claims Boko Haram is funded and instructed by members of Jonathan’s own ruling party, the Peoples Democratic Party (PDP). He says that he was approached by a politician and promised cash to send threatening text messages under an assumed name to a variety of public figures. Konduga chose the nom de guerre Usman Al Zawihiri (a nod to new al Qaeda leader Ayman Al Zawahiri), and fulfilled his side of the bargain.

He was, however, picked up by security forces earlier this month. In his confession, Konduga fingered two politicians in particular, both of them relative heavyweights: Borno state senator Ali Ndume and the late ambassador Saidu Pinday, both PDP members. He claimed that they were the financial backers of Boko Haram, and mentioned a figure of around R500,000 being given to the group.

Although counterintuitive, it’s not a huge surprise that members of Jonathan’s party are fomenting insurrection against his government. David Zounmenou, senior researcher at the Institute for Security Studies, explained the situation to iMaverick. “The problems with Boko Haram are located in the political manipulations taking place before the presidential elections, particularly the fact that many members of the PDP weren’t happy that Jonathan decided to stand.” They weren’t happy because Jonathan’s candidacy broke the PDP’s cardinal rule: that the presidency should be alternated between a southerner and a northerner. Jonathan is a southerner, and his predecessor Umaru Yar Adua was a northerner. But Yar Adua died before the end of his second term, so, as far as many northern politicians are concerned, it’s still the turn of the north to be president and still the turn of the north to benefit from the patronage that comes from the presidency.

And it’s not just the presidency northern politicians are worried about. Jonathan’s candidacy hurt the PDP in the north, particularly in the states of Borno and Yobe where Boko Haram is strong. In Yobe, the PDP lost a senate seat that was previously considered safe. So some northern politicians – at least two by Konduga’s account – took matters into their own hands, in a classic Nigerian move. As Zounmenou wryly commented: “Using militant groups for political purposes is quite in fashion in Nigerian political circles.”

The logic is double-sided. Firstly, an increase in insecurity means the federal government has to funnel more money into the destabilised regions and that money can be used for patronage by the politicians who still have some control, such as the implicated senator. Secondly, the security issues hugely undermine Jonathan’s leadership, making it more difficult for him to lead effectively.

Jonathan will be enjoying the sensational claims made by Kondunga. It’s an excellent chance for him to get rid of trouble-making elements within his own party and consolidate his own power. And it gives him the chance to look like he’s taking serious action –Senator Ndume has already been arrested. But for these very reasons, it’s necessary for impartial observers to be somewhat sceptical of Kondunga’s account, especially given the not-so-clean reputation of the Nigerian security forces when it comes to how much force they use in extracting “confessions”.

Ultimately, the proof will not be in the judicial processes which will follow, but in how long Boko Haram can continue its near-daily attacks on state institutions. If it’s indeed funded by northern politicians, then these funds should dry up in the ensuing months and so should its ability to continue fighting. But if it has genuine popular support, and other sources of funding, then Nigeria has a far more serious problem on its hands – and Jonathan still has lots of work to do. DM