Bleak is the new black, as MPs say yes to Secrecy Bill

Bleak is the new black, as MPs say yes to Secrecy Bill 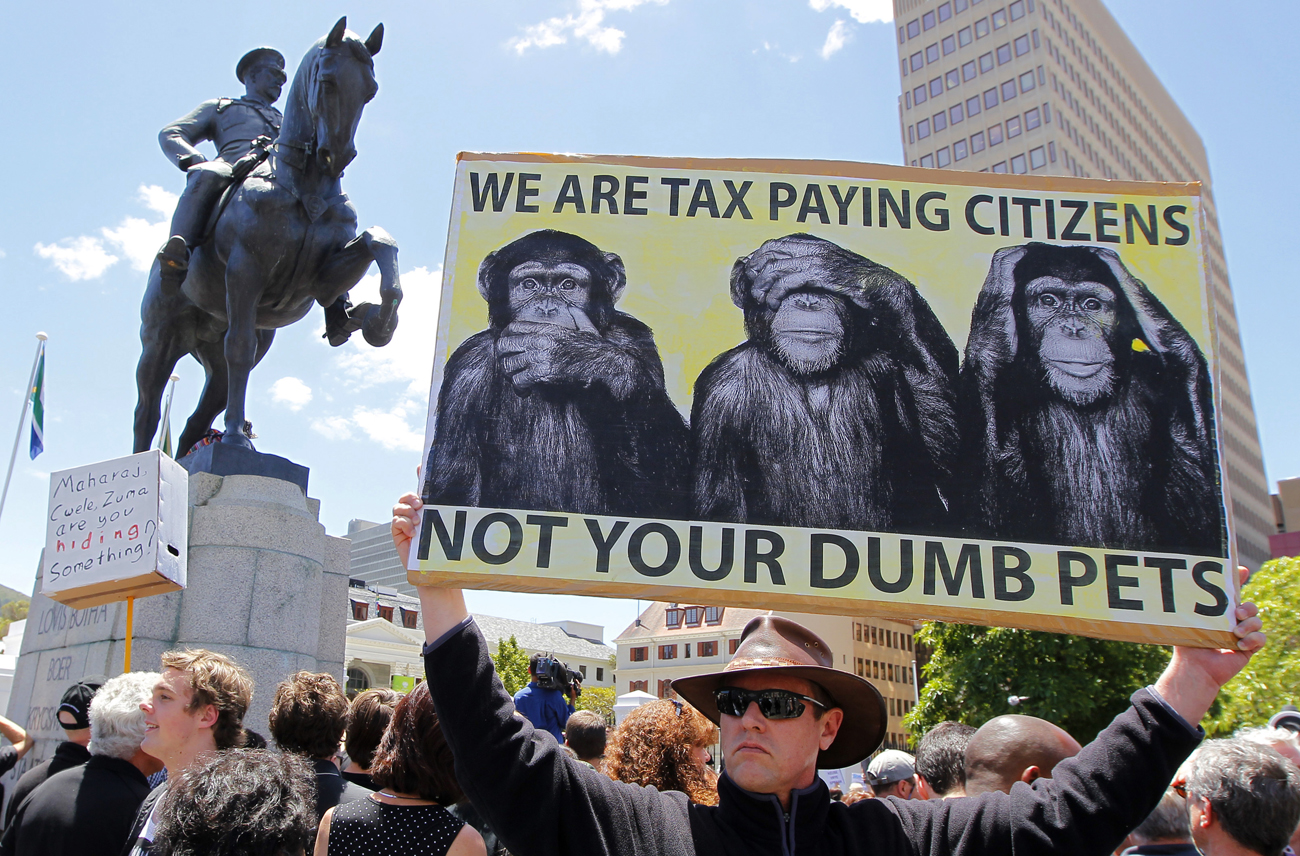 It was hardly a surprise that members of Parliament voted overwhelmingly for the Protection of State Information Bill on Tuesday afternoon. The final tally was 229 MPs for the bill and 107 against it, with two abstentions. Although the vote marked a sobering day for South Africa's constitutional democracy, it is just the first step in a bid to get the legislation on our law books, and civil-society activists and the media are fighting the process with everything they've got. By THERESA MALLINSON.

Tuesday afternoon’s proceedings in Parliament caused a flurry on Twitter, with several people, including members of the opposition and, ahem, media houses, pre-emptively tweeting that the Protection of State Information Bill had been voted into law. Let’s get this straight. What happened is that MPs first voted against a motion by opposition parties to delay the bill; then they voted to accept the ad hoc committee report on the Protection of State Information Bill. At this stage one MP from each party had a chance to speak for three minutes; only then did the National Assembly vote to pass the bill, and send it on to the National Council of Provinces.

Of the 400 MPs that constitute the National Assembly, 338 were present. Thirty-five of the ANC’s 264 MPs were absent, leaving the ruling party with 229 MPs in attendance. Collectively, there are 136 opposition MPs, with 27 of them absent on Tuesday, and 109 present. The voting went like this: 229 MPS voted for the bill, 107 against it and two abstained. It would be easy enough to assume that the voting went strictly along party lines, although City Press editor Ferial Haffajee, who was sitting in the press gallery above Public Enterprises Minister Malusi Gigaba and Minister in the Presidency Trevor Manuel, stated on Twitter that she had seen both of their votes, going on to suggest that “it looks like a cabinet minister abstained”.

But we’ll find out who voted which way soon enough – as MPs voted electronically, a record of individual votes will be published in the National Assembly’s official minutes, which are usually released the day following proceedings. The DA leader in Parliament, Lindiwe Mazibuko, delivered a rousing speech, effectively calling on MPs to vote with their conscience. “If passed, this bill will unstitch the very fabric of our Constitution. It will criminalise the freedoms that so many of our people fought for. What will you, the members on that side of the House, tell your grandchildren one day?” she asked. “I know you will tell them that you fought for freedom. But will you also tell them you helped to destroy it? Because they will pay the price for your actions today. Let this weigh heavy on your conscience as you cast your vote.”  But her words clearly had little effect: what we can be fairly certain of right now, is that very few – if any – MPs voted against their party’s official line.

“What I’ve been saying to people is, honestly, no one is actually too surprised,” said Right2Know national coordinator Murray Hunter. “The ANC members among us are obviously disappointed. But the truth is we have been preparing for a much longer battle against the Secrecy Bill. We’ve been preparing for the fact that the Minister of State Security (Siyabonga Cwele) has exercised enough damage control on the bill, that the rank and file of the ANC is going to vote his way. Whether or not there are thousands of people outside Parliament and elsewhere calling for the bill to be scrapped – they’ve convinced themselves that they’re doing the right thing.”

The statement, following on from ANC MP Luwellyn Landers’ speech to the House, also made much of the fact that, while a public-defence clause has not been included, the rights of whistleblowers are still protected, and a public-interest override is permitted. But as Hunter pointed out, this protection applies only in very limited circumstances – and is a far cry from the robust public-interest-defence clause Right2Know and other organisations have called for.

After the voting occurred, representatives of the South African National Editors Forum, who had been sitting in the press gallery, staged a mass walkout. In a last-ditch attempt to appeal to ANC MPs’ consciences, several newspapers had published a statement from the editors on Tuesday morning. “Every MP who presses the green button to vote ‘yes’ for the Protection of State Information Bill will at that moment take personal responsibility for the first piece of legislation since the end of apartheid that dismantles an aspect of our democracy – a betrayal that will haunt them forever,” it began. It ended with a bleak description of what would come to pass that very afternoon: “Without a triumph of personal integrity over political expediency in the National Assembly this afternoon, this day will mark the beginning of the end of the freedom of information we cherish as a pillar of the Constitution that guards our future.”

Mail & Guardian editor Nic Dawes said: “When we stood up to walk out, I felt genuinely disturbed – almost a physical sensation.” Dawes emphasised that he holds Parliament, and its MPs in great respect. “I’ve spent a lot of time in Parliament; probably the most important part of my career as a reporter happened in Parliament,” he said. “I was really thrilled, when I first got there, to watch the democratic process so closely. I remember being struck about how open the parliamentary process was.

“I’ve got a lot of respect for the work that goes on in Parliament, the work it’s done to overturn so many apartheid laws,” Dawes continued. “A lot of ANC MPs are people I’ve got an immense respect for, not just for the work they did in the struggle, but the work they’ve done since then. To watch them shifting in their seats – and then vote for the bill – was very uncomfortable.”

Hunter concurred that the National Council of Provinces was a crucial part of the process: “I think that our next step will be to find out when this thing will go to the National Council of Provinces and use this as an opportunity to put a great deal of pressure on the (body) to exercise its obligation to open this up for further public consultation,” he said. “No one wants to have to go to court over this. We need to treat that as the last possible resort. We need to put our energy into fighting it in Parliament; it is the people’s Parliament.”

Even after the bill has been passed by both houses, there is still the opportunity for it to be referred directly to the Constitutional Court, should one-third of MPs petition Zuma to do so. “The problem is that the opposition parties are divided: it’s clear that the DA, the ACDP and, to some extent, Cope want to go one way; and the IFP and FF+ want to go another way,” said Hunter. “They just don’t have sufficient numbers in Parliament to go this route.”

Dawes was slightly more optimistic on this front. “I have to say that I was impressed by the opposition today. I was struck by the apparent organisation among the opposition, and by the way they worked the parliamentary procedure. It was one of the more robust sessions that I’ve seen in Parliament, not just because people heckled and yelled at each other, but because they used the parliamentary system,” he said. “I think there’s the chance of that (the bill being referred directly to the Constitutional Court), but the numbers are very, very tight, but they would have to be completely on top of their game.”

For many people, “Black Tuesday” has marked the loss of their faith in the ANC, but as we wake up on “bleak Wednesday”, some see the opportunity to commit – or recommit – to the fight for access to information. This struggle isn’t relevant to the media only; the sooner the SA public understands that simple fact, the better. DM