Occupied no more: where next for 'the movement'?

Occupied no more: where next for ‘the movement’? 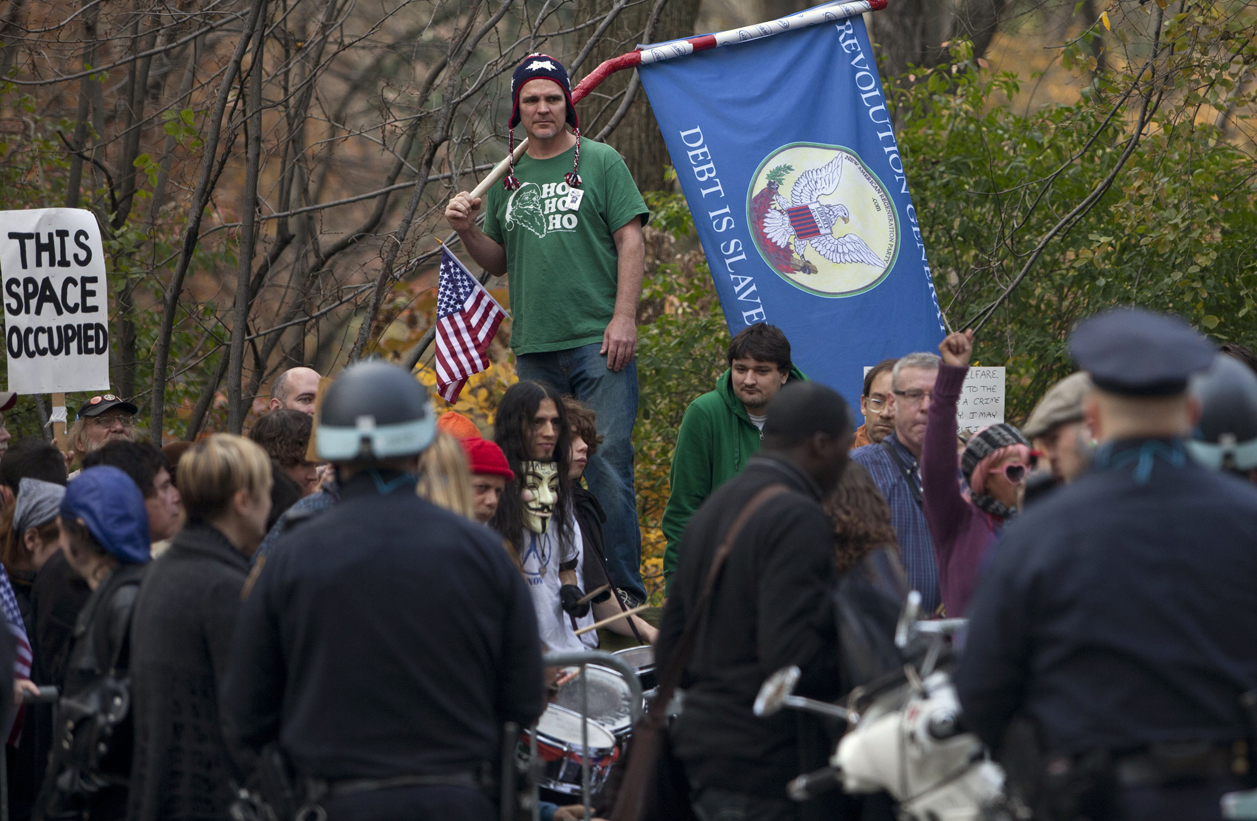 Last week, the NYPD descended on Zuccotti Park in downtown Manhattan with an eviction notice for the Occupy Wall Street protesters. In the two months since the first activists set up camp, “the movement” has gone global and succeeded beyond its founders’ wildest dreams. So where to now? And, if nowhere, what’s been achieved? By KEVIN BLOOM.

At around 01:00 EST on Tuesday 15 November, a few hours after New York City’s mayor Michael Bloomberg had issued a top-secret directive to disassemble the tented village that had become Occupy Wall Street’s headquarters in Zuccotti Park, the movement’s co-founder received an email. Kalle Lasn, the 69-year-old creator of the anti-consumerist magazine Adbusters, had been lying in bed reading a book when he was interrupted by a phone call informing him that hundreds of NYPD officers had descended on the park with an eviction notice. He fired up his laptop. The email was from Micah White, senior editor at Adbusters and Lasn’s closest collaborator, and it contained just two words: “Eerie timing!”

The New Yorker, which recently ran a report on Lasn and White, reported the pair had that very same night sent a “tactical briefing” to 90,000 friends of Adbusters, suggesting that all protesters throw a party in mid-December, declare victory and go home. Instead, “Lasn and White quickly hammered out a post-Zuccotti plan. White would draft a new memorandum, suggesting that Phase I – signs, meetings, camps, marches – was now over. Phase II would involve a swarming strategy of ‘surprise attacks against business as usual,’ with the potential to be ‘more intense and visceral, depending on how the Bloombergs of the world react’.”

But does the movement have the power and the focus – and the public sympathy – to do such a thing? In mid-November, polls revealed that popular support for the broad goals of Occupy Wall Street (in a nutshell: the end of social and economic inequality, and prison terms for key investment bankers) had been declining. While October had returned statistics showing that 35% of US voters supported the protests versus 26% against, November showed 33% for and 45% against. Also, commentators had begun in the last few weeks to harshly criticise the movement, accusing it of self-indulgence, banality and aimlessness.

It’s this last critique – the lack of clearly defined objectives – that was most often voiced, right next to the observation that an ideological belief in leaderless-ness was simply naïve. How, countless opinionistas asked, if Occupy Wall Street refused to issue demands or outline a clear political agenda, could it ever hope to bring about real change? Why, despite the impressive global attention it attracted, had it never done anything to sway those in congress or the White House?

Responding to just such an assessment published in the Boston Globe, two activists wrote a letter on Monday that read: “The Occupation Party, working in solidarity with Occupy Wall Street, has developed and published core values and a platform that outline the political and governance direction we intend to pursue. We are vetting candidates for office in New York, Kentucky and Ohio. While we intend to play by the rules outlined in our Constitution, we do not intend to play the no-win game constructed by the Republicans and Democrats and their corporate and 1% patrons. We will change that game to one that works to promote the general welfare for the 99% and the 1% – for all our citizens.”

So, Occupy Wall Street has indeed evolved into a political party. Problem is, a visit to the website, at theoccupationparty.org, doesn’t exactly inspire faith that the initiative will succeed. For one thing, the page entitled “Electoral Reform and Politics” contains less than 200 words, and begins: “Everything is connected to everything else. In the economy, everyone’s spending is the income of someone else. It’s circular.  (I’m oversimplifying, I know).” There is, thankfully, a link on the page to a much longer “consensus document,” where the writing is not quite so self-conscious and apologetic, but here too there is a vagueness as to concrete policies – the document effectively recommends “experimentation” with alternative voting methods, nonpartisan redistricting, term limits, vote counting and the like.

How the party plans to implement these goals without playing the no-win game of the Democrats and Republicans is not answered. Moreover, now that the impressive spectacles offered by the global protests have come to an end, the media is probably going to be a lot less interested in the Occupy movement and its offshoots – which means that it’s going to be a lot harder and expensive, to drum up campaign support.

It would seem, then, that Occupy Wall Street has already hit its high-water mark and that the wave is quickly receding. Still, it would be disingenuous to argue that the movement, which for two months made global headlines, has left zero impact on the world. As The New York Times puts it: “The people who make up Occupy Wall Street know enough to sense that a tipping point is at hand. Regardless of how the movement proceeds now that it is not gathered around campfires, its impact on the debate could be lasting and significant. If the coming election ends up being framed in terms of ‘fairness,’ the people who took to the streets, battled the police and sat through those endless general assembly meetings will know that even though their tents are gone, their footprint remains.” DM