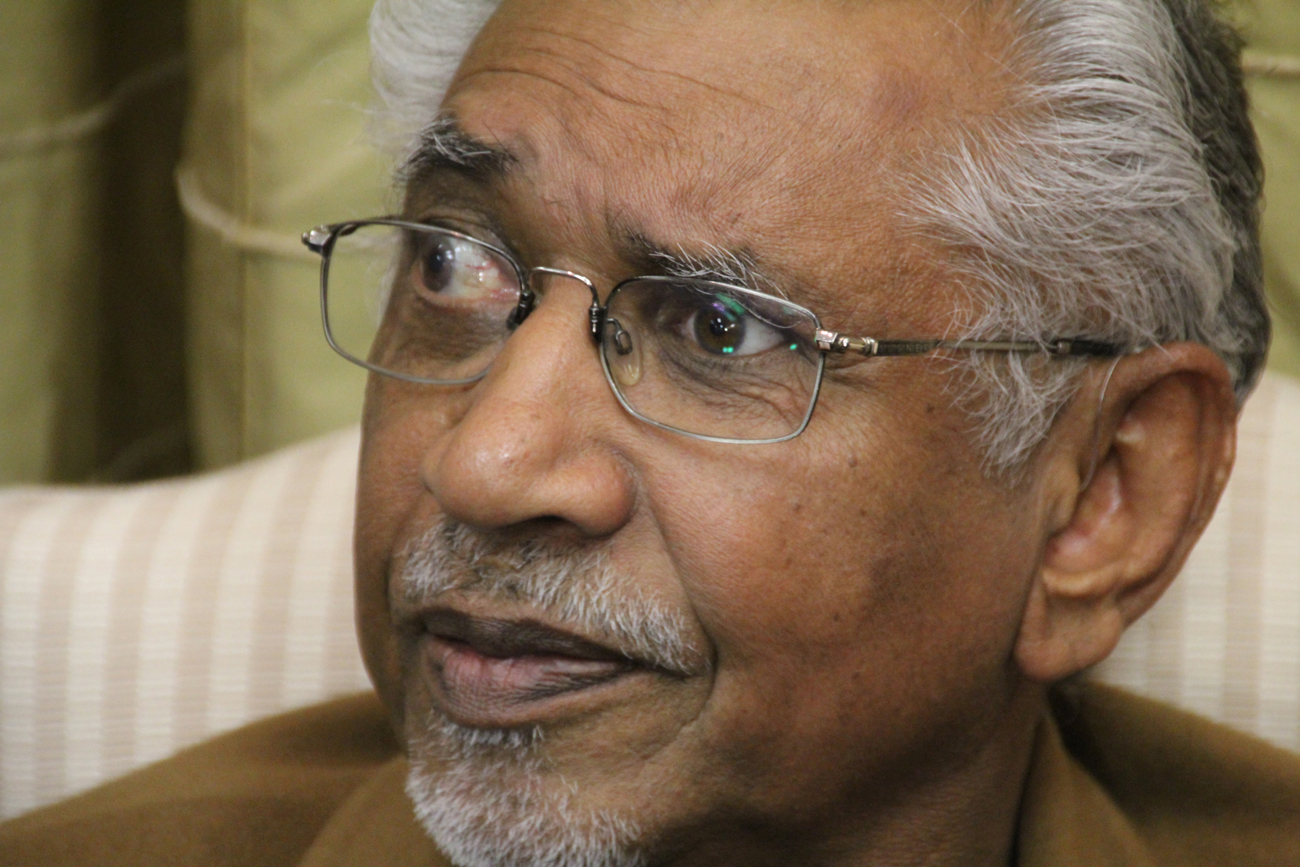 If ever there was a tragic hero in South Africa’s political milieu, it’s President Jacob Zuma’s spokesman Mac Maharaj. His extraordinary role in the liberation struggle is being battered by the latest round of damaging allegations that he lied to a law enforcement agency and took a bribe from an arms company. By STEPHEN GROOTES.

In 2001, The Economist magazine needed a new ad campaign. Something with heft, the kind of TV ad that would appeal to those interested in the journal’s offering. It wanted something a little emotional too. And if you’re one of the oldest publications in the English-speaking world, you need something a touch above all the others. They went for Mac Maharaj. He had stepped down as South Africa’s transport minister two years before, but his real story was how he was tortured on Robben Island, about how he stood up to apartheid, about being the neighbour of the most famous political prisoner of the 20th century. And how he transcribed that prisoner’s autobiography and smuggled it out of jail. The advert was quite something. It contains a reference to how, now in South Africa, “we can read whatever we want”.

How things have changed.

Maharaj was one of the best of the best of the old ANC, the liberation movement, the group of people who fought only for freedom and nothing else. Somehow these people were above normal politics. They were led by a saint, and were held to a very different standard. Their life stories were incredible. Maharaj’s was one of the more fantastical. From Newcastle in KwaZulu-Natal through Robben Island and exile, he’d been through the mill. Put simply, Maharaj is one of the super-heroes of the struggle. As an Indian, he would not have looked forward to a life as awful as some of his black comrades. He would have been able to perhaps be a professional, a lawyer, even an advocate (he certainly has the brains and the mind for it, he can think on his feet faster than just about anyone else). He could have taken it easy. But he didn’t. He turned his back on that comfortable future, and took up arms.

And make no bones about it, it was hard. Can you imagine being tied down and tortured by an agent of a state as oppressive as apartheid South Africa? Every hand seemed to be against yours. You had no power, no right of appeal over anything. And what happened behind closed doors stayed there. You were not able to tell anyone. And if you did, so what? No one would publish anything. They didn’t care. And when he was finally released he went into exile. And then came back, and ran Operation Vula for the ANC in KZN – along with people like President Jacob Zuma.

But somewhere along the line, something changed. It’s hard to know exactly what. He’s not saying, for the moment. But something happened. In the late ’90’s the Arms Deal was beginning to get going. There were negotiations, talks, deals, late night dinners, deals. There are still huge questions about who received the payments and for what services. We know Zuma got money (as his financial advisor was found guilty. Of course Zuma was never tried in court). Many think Thabo Mbeki himself may have negotiated some kind of payment for the ANC. And now we seem to have the slam dunk case from the Sunday Times story this weekend, that Maharaj took money as well.

Looking back now, it seems the event, or series of events, must have occurred somewhere between when he took office 1994, and when he resigned in 1999. By 2001 the Scorpions were investigating him.

South Africa was a different place then. It was more innocent. The ANC were the good guys. Hell, independent people were being still appointed to top jobs in the judiciary. But money was starting to infect the system. Tony Yengeni was taking a discount for his role in steering the Arms Deal through Parliament. The ANC was putting pressure on Andrew Feinstein to stop calling for an audit of the deal, in his position as a member of the National Assembly’s Standing Committee on Public Accounts.

And Schabir Shaik was paying regular installments to his “investment in political connectivity” through his financial relationship with Zuma. Perhaps here is where it all went wrong. The money was there, on offer. You had suffered for it. And you owe it to yourself, your family, your friends, those who stood by you. Shouldn’t you benefit a bit too from power? After all, you fought for it, and sacrificed so much for it. Spouses, kids went through hell in exile. Payback? Anyway, people you know and trust, people you’ve put your life on the line for are doing it.

Perhaps it started slowly. But before anyone knew it, a French arms company was putting money (according to the Sunday Times) into Zarina Maharaj’s account, which was offshore. Which means that someone had to have arranged for that account to exist first. And you don’t tend to do that without good reason.

Maharaj has gone from a historically heroic figure, celebrating how “we can read what we want” to a grubby little politician, trying to stop a newspaper from publishing documents. It’ll be easy for people to point and say “you’re just like all the others”. But that would also be only part of the story.

If the Maharaj story had ended in 1999, when he retired, he would have been left as the image of a heroic figure. Someone who made more of a difference than just about anyone else, when he didn’t have to. But he’s blown that chance. Somewhere in 1999 or thereabouts, his tragedy struck. In the classical definition, he brought it upon himself.

He’s gone from towering hero, international icon, to being unable to even answer the simple question, “Did you take a bribe during the Arms Deal”.  Terribly sad. DM