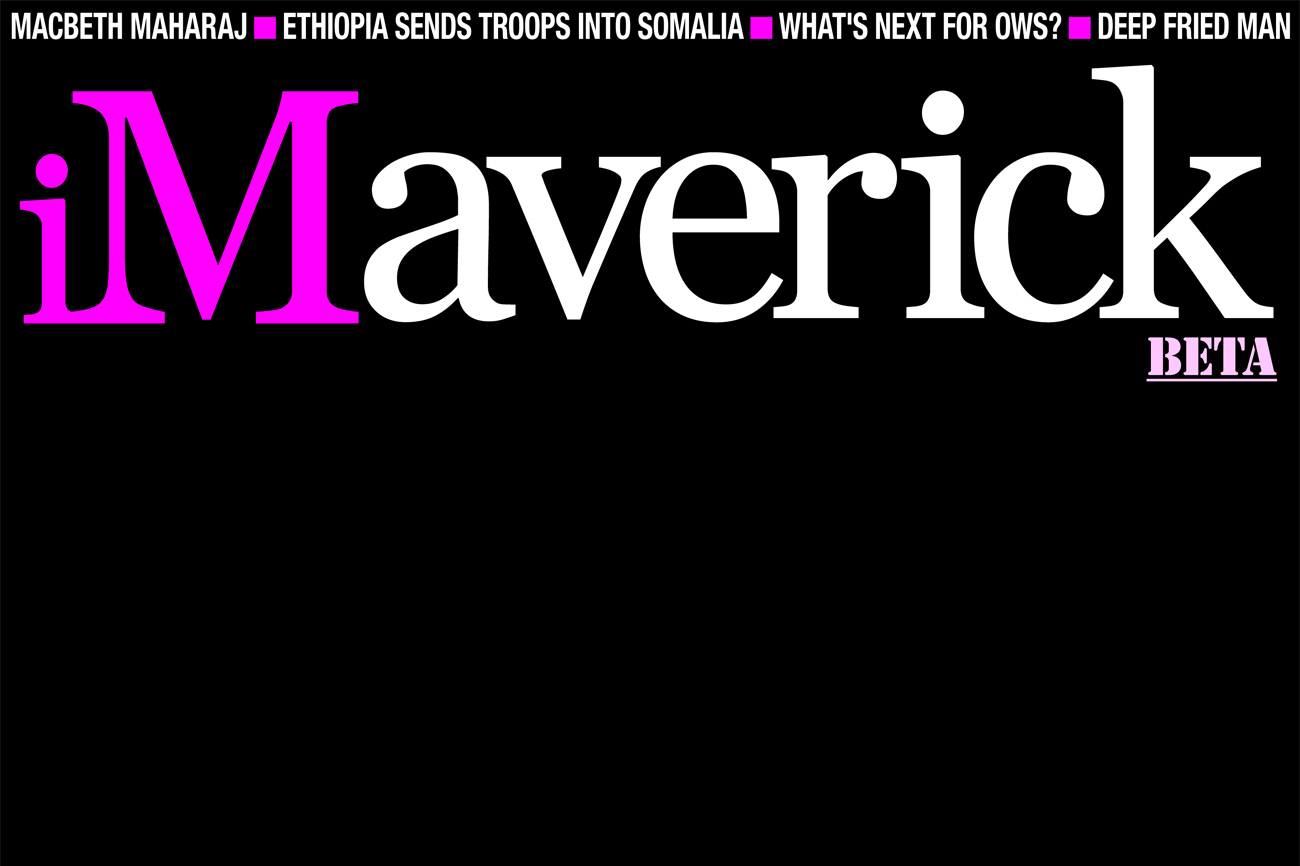 As a citizen I am deeply disturbed by the battering- ram approach towards passing the Protection of State Information Bill into law. It fails to realise that transparency is a foundation of the democracy we fought for. Our struggle against apartheid was a struggle for voice. That principle should not be betrayed.

Next Monday’s parliamentary elections won’t be a coming-of-age party for Egypt’s revolution. Instead, the fight is on against the interim military government who don’t know what “interim” means. But even if imperfect, these elections are the first step in creating genuine civilian rule. By SIMON ALLISON.

KENYA CORRUPTION SURVEY: POLITICANS ALL AS BAD AS EACH OTHER

A Kenyan survey into political corruption struggled to single anyone out for criticism. The problem? They’re all dirty – at least as far as the Kenyan public is concerned. Not that the politicians will be too worried; after all, politics isn’t always about serving the public.
By SIMON ALLISON.

If ever there was a tragic hero in South Africa’s political milieu, it’s President Jacob Zuma’s spokesman Mac Maharaj. His extraordinary role in the liberation struggle is being battered by the latest round of damaging allegations that he lied to a law enforcement agency and took a bribe from an arms company. By STEPHEN GROOTES.

PLAYING THE LOTTERY WITH SA SPORT

The 2011 Sport and Recreation Indaba is underway at Gallagher Estate in Midrand. On Monday morning, the politicians had their chance to speak. Both the deputy president and the sport minister said that we had become more crap at sport, and didn’t even have progress in transformation to show for it. So what is to be done? The solution is about as Mbalula as it could possibly be. By SIPHO HLONGWANE.

The opening event of next week’s ecomentalist jamboree in exotic Durban involves a walk by grandees along a painted blue line, which represents “Durban’s dire climate catastrophe”. Except for one little detail. It doesn’t, really. And the mayor doesn’t really believe it does, either.

Ethiopia’s first invasion of Somalia was the major contributing factor in causing the complete breakdown of government in Somalia. It also helped to create Al Shabaab. Five years later, Ethiopian troops are back over the border, in force, hoping to make amends and make sure that Kenya doesn’t get all the glory. Chances are, there won’t be much glory to go round. By SIMON ALLISON.

OCCUPIED NO MORE: WHERE NEXT FOR ‘THE MOVEMENT’?

Last week, the NYPD descended on Zuccotti Park in downtown Manhattan with an eviction notice for the Occupy Wall Street protesters. In the two months since the first activists set up camp, “the movement” has gone global and succeeded beyond its founders’ wildest dreams. So where to now? And, if nowhere, what’s been achieved? By KEVIN BLOOM.

Yemen’s opposition said on Monday it had finalised a deal with President Ali Abdullah Saleh under which he is to transfer his powers to his deputy, in a move to end ten months of popular protests that have pushed the country to the brink of civil war. By JOURNALIST (Reuters).

A careful look around shows that business people keep searching out new ways to do their work – melding together a careful attention to the value of providing good service with the liberating power of IT and the internet. It has always been predicted, and now, more and more it seems to be coming true. BY J BROOKS SPECTOR.

In October, the United States accused Iran of plotting to kill Saudi Arabia’s ambassador to the US. Iran vehemently denies the allegation but the US, and Saudi Arabia, are unconvinced. Then, the UN report on Iran’s nuclear capacity was released saying Tehran worked for many years to develop nuclear weapons – and may still be doing so. In response, Western nations have threatened economic sanctions and military strikes to condemn Tehran for secretly developing nuclear weapons. By KHADIJA PATEL.

YOUR GUIDE TO THE NEW-LOOK ITALY, GREECE, AND SPAIN

Within a few weeks, we’ve seen power change hands in Italy, Greece and Spain. Finding it hard to keep up? REBECCA DAVIS tries to make sense of it all.

From journalism school dropout, to so-so alternative folk singer Daniel Friedman aka Deep Fried Man has stepped into the limelight and is now award winning stand-up comedian and a darling of the ZA Twitterati. With his first-one man act about to open in Sandton, the Fried One’s a far cry from those days when he was singing folksy stuff to a small group of friends. By MANDY DE WAAL.

SO WHAT IF YOU’VE HEARD THE JOKES BEFORE, SIT DOWN AND ENJOY THEM AGAIN

Set in a therapist’s studio, this lengthily titled play had most of the audience laughing loudly and steadily at the witty lines sparking out at us. But my LESLEY STONES’S escort was sitting there in silence, a glum look on his face. “I’ve heard all the jokes before,” he muttered.

SHARED HONOURS FOR A SHORT BUT DEEP TEST SERIES

The Australian team stood firm and won the final Test at the Wanderers, sharing the spoils of the series with the Proteas. PAUL BERKOWITZ looks back on a magical, all-too-brief fortnight.

Sport’s highest tribunal began a four- day hearing on Monday which could result in three-times Tour de France champion Alberto Contador being stripped of his 2010 title for doping. By BRIAN HOMEWOOD (Reuters).

A fire in New Delhi on Sunday killed 13 eunuchs who were participating in a ceremony held every five years. India has a population of 700,000 eunuchs, but outside of disasters like this one, you rarely hear about them. By REBECCA DAVIS.

MATFIELD CALLS ON NEXT COACH TO OVERLOOK FOREIGN BOKS

Recently retired lock Victor Matfield has called on whoever becomes the next Springbok coach to only select locally based players. By PLANETRUGBY.COM.

Andy Murray could find no way through the formidable defences of Spain’s David Ferrer as the home favourite slumped to a 6-4 7-5 defeat in his opening group match at the ATP World Tour Finals on Monday. By MARTIN HERMAN (Reuters).

Rafa Nadal branded comments made by former French tennis player Yannick Noah about doping as “stupid” on Sunday, saying they were the words of a “kid”. By MARTIN HERMAN (Reuters).

The British Olympic Association (BOA) has vowed to defend its hard-line approach on doping despite facing the prospect of sanctions after being found to be non-compliant by the World Anti-Doping Agency (Wada). By JULIAN LINDEN (Reuters).