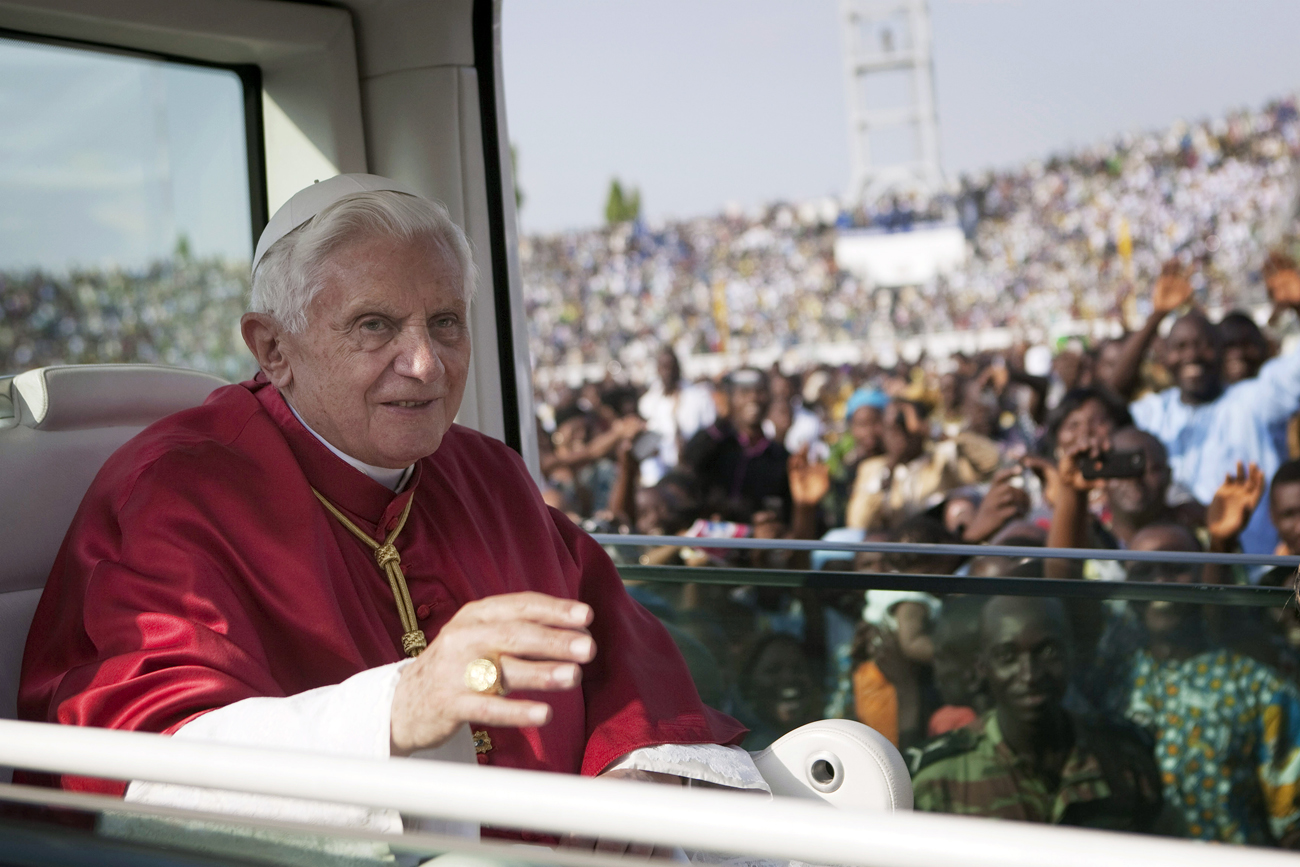 The Pope was in Africa this weekend, visiting the little West African country of Benin which is producing priests a lot faster than anywhere in Europe. It seems the future of the Catholic Church is in Africa, and it looks like the Pope knows it. By SIMON ALLISON.

On the second day of his trip to Benin – a country referred to all too often in the international media coverage as either simply “Africa” or the “the heartland of Africa’s voodoo religion” – Pope Benedict XVI unveiled the Catholic Church’s Pledge for Africa. The importance of this document should not be underestimated, as it is the guide by which Africa’s Catholics are supposed to live their lives – and there are a lot of African Catholics. It tells them how to deal with the conflicts between tradition and modernity, what to think about HIV/Aids and urges peace, justice and reconciliation on the continent.

The Catholic Church is growing faster in Africa than in anywhere else in the world. Churches are full, congregations are enthusiastic and seminaries are hopelessly oversubscribed with young men eager to spread the word (and, perhaps, a fair few chancers desirous of the job security offered by the priesthood).

Benin in particular is witness to something of a Catholic resurgence, with the Catholic population growing to nearly 30% of the population in recent years. The country’s Ouidah seminary is a training ground for new African priests, some of whom – in a wonderful irony given the colonial impact of Catholic missionaries in Africa – are being groomed to preach in Europe, where the Church is struggling to find enough priests to fill its increasingly empty churches.

But Benin, and the city of Ouidah in particular, was an unlikely place for the Pope to launch the church’s Pledge for Africa; but one that delighted the foreign correspondents in attendance. The official religion of Benin is voodoo, and Ouidah is that religion’s spiritual home. The juxtaposition between the Pope’s pious Catholicism and Voodoo’s mystical spiritualism, with – if only in the West– all its dark connotations and the myth, beloved in movies, of voodoo dolls and pins, was too much for journalists to resist. “As [the Pope] signed the papal treatise, several dozen Voodoo practitioners sat in plastic chairs in the Temple of the Pythons located at the opposite end of the basilica’s square. The high priest, who sat with his foot on a bottle of gin, a traditional Voodoo spirit offering, said they listened carefully as the pope’s message was projected outside through massive speakers mounted on the basilica,” wrote Rukmini Callimachi for Associated Press. A Reuters reporter had even more fun describing the Temple of Pythons. “A sign painted on the wall outside the voodoo complex read ‘Temple of the Pythons’ and a statue of a bare-breasted woman holding several snakes stood by the entrance. Inside was a small stone house with about two dozen large and baby pythons. A voodoo priest put five or six around his neck and arms for a visiting reporter. Dressed in red, the snake priest and others dressed in white said they had nothing against the pope’s visit.”

The Pope, remarkably, didn’t seem to have too much against the voodoo priests; indeed, he said that the church could learn from them. His Pledge for Africa, compiled with the recommendations of African clergy, emphasised how the modern and the traditional should work together, and that traditional practises should be examined to discern if aspects of them could be helpful to the human condition. But traditional practices shouldn’t be permitted in the church if they clash directly with church doctrine. It’s up to bishops to “separate the good seed from the weeds” in this regard.

The Pledge also addressed the issue of HIV/Aids, which is something that tripped up Pope Benedict on his last visit to the continent, when he appeared to say that condoms increase the spread of HIV/Aids – a distinctly un-scientific and counter-factual message. He has since recanted on this claim, acknowledging that there are some instances where a condom could be helpful, but the Church still doesn’t condone condom use. It’s official policy is repeated in this latest document, which describes Aids as an “ethical problem” and advocates abstinence as the most effective solution.

Generally, Pope Benedict seemed surprisingly in tune with his audience on this trip. As well as castigating corruption, he had some harsh words about how Africa is often portrayed. It’s worth quoting him in full. “Too often, our mind is blocked by prejudices or by images which give a negative impression of the realities of Africa, the fruit of a bleak analysis. It is tempting to point to what does not work; it is easy to assume the judgemental tone of the moraliser or of the expert who imposes his conclusions and proposes, at the end of the day, few useful solutions. It is also tempting to analyse the realities of Africa like a curious ethnologist or like someone who sees the vast resources only in terms of energy, minerals, agriculture and humanity easily exploited for often dubious ends. These are reductionist and disrespectful points of view which lead to the unhelpful ‘objectification’ of Africa and her inhabitants.”

This is an unusual, but refreshing, viewpoint from a man who is moraliser-in-chief of one of the most judgmental (if too often not moral) bodies in the world, the Catholic Church, and it’s an important sentiment; Africa is too often understood simplistically by those who think they know better, and this is a major part of the continent’s problems.

It’s a good thing that the Pope is starting to understand Africa better. It might not be too long before Africans form the majority if his flock; already Africans are the hope for the future of the Catholic congregation. The Pope may have left Africa on Monday, but the church is here to stay. DM