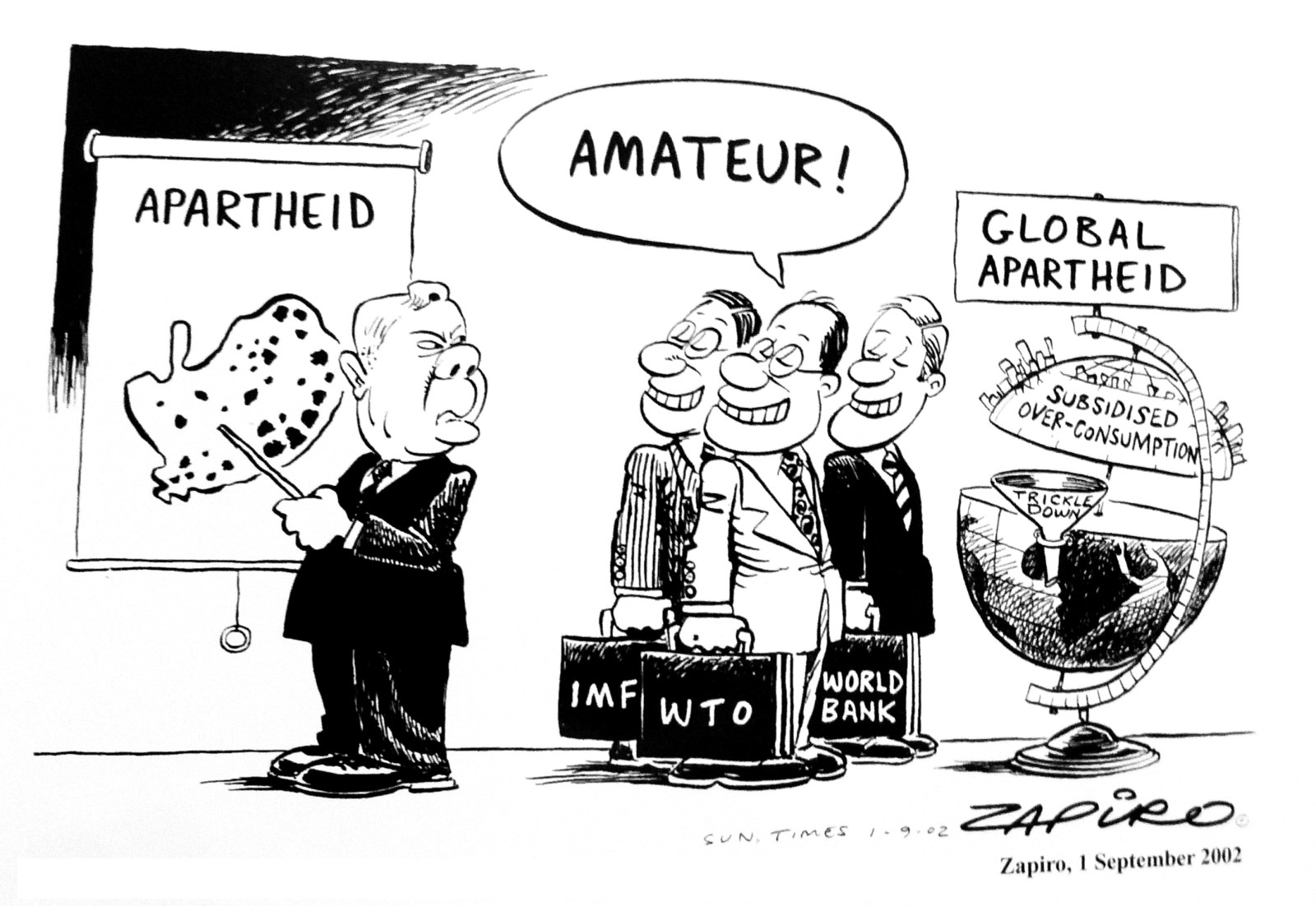 A hundred years of South African political cartoons are lovingly curated in a new book which explores how cartoonists have described – and made light of – South Africa’s fraught relationship with the outside world. It’s funny, it’s informative, but it’s also a strangely serious insight into what’s wrong with international relations. By SIMON ALLISON.

Peter Vale has never been afraid to correct anyone, not least the young journalist on the phone asking him about his latest book, Keeping a Sharp Eye – A century of political cartoons on South Africa’s International Relations. “It’s a fun book,” I tell him. And it was – South Africa’s produced plenty of genuinely funny cartoons, and many of them are featured in this book.

But it’s not just a fun book, and that’s where Vale took me to task. “You didn’t think it was serious?” he asked me. “I really want people to laugh and giggle about it. You can laugh and giggle about it, but it’s serious stuff. For me, behind it has always been a critique and I think the real message of the book is a serious, epistemological thing. It’s really a critique on mainstream international relations.”

Vale is well placed to critique international relations. He’s been working in field for decades, currently as Professor of Humanities at the University of Johannesburg. He’s published a number of books and written plenty of articles. But this is his first foray into the world of cartoons. “I think cartoons are much more powerful than the written word. The visual is always more powerful than the written. And, psychologically, we have an immediate association with cartoons. You can see yourself in a cartoon, you can see the joke in it. They cross boundaries – if you have a sense of humour.”

But he’s right that political cartoons aren’t just humorous. As funny as they can be, they touch on the most serious issues facing society and good cartoons are often the best way to convey the complexities of life. Desmond Tutu describes this in the book’s foreword: “…cartoonists often provide the most telling insight into issues that the rest of us find difficult, if not impossible, to comment on. In times of severe repression, the cartoonist’s sly metaphor might be the only possible public statement.”

The issues in the book are as complex as they come. South Africa’s international relations over the last century have been fraught and, via a judicious selection cartoons by either South Africans or cartoonists working in South Africa, Vale takes us through the period’s divisive politics and momentous decisions. No cows are too sacred from the two World Wars, the collapse of the British Empire, the beginning of apartheid, the imposition of sanctions, South Africa’s changing relationship with the international community and its complex attitude to Africa, the new government, Mbeki’s African Renaissance, the arms deal. All the cartoons are accompanied by Vale’s commentary, which is simple and informative providing background and allowing the cartoons to speak for themselves.

The book works on three levels. Firstly, there’s the cartoons themselves. Then there’s the history behind them. And finally there’s the critique of international relations in general, which is not explicit, but emerges unavoidably through the sheer irreverence of the cartoons.

As Vale describes it: “International relations is a way of organising the world which privileges the rich and powerful. Here is a discipline which is conceived as making the world a more peaceful place, but also accepting the world as it is. Organising the world around this completely constructed notion of society is a way of organising people with power and privilege without questioning the deep moral issues of the way the world is constructed.” The history is not comprehensive – this is not the definitive work on the subject. But it is accessible in a way academic efforts sometimes aren’t, and Vale’s hope is that his book is used in schools as a way to get students interested in how South Africa relates to the outside world.

For Vale, it’s the book’s final cartoon which is most illustrative of this point. It’s by Zapiro, whose contribution is disproportionately large, a function both of his genius and his enormous productivity. It shows Hendrik Verwoerd showing off his plans for apartheid, only to be derided as an “amateur” by the technocrats of the World Bank, International Monetary Fund and World Trade Organisation, who are standing next to a divided globe with the caption “Global Apartheid”.

As Desmond Tutu writes in the foreword: these cartoons might be funny. But all too often, they’re no laughing matter. DM

Keeping a Sharp Eye – A century of political cartoons on South Africa’s International Relations is published by Otterley Press and is available at Exclusive Books.