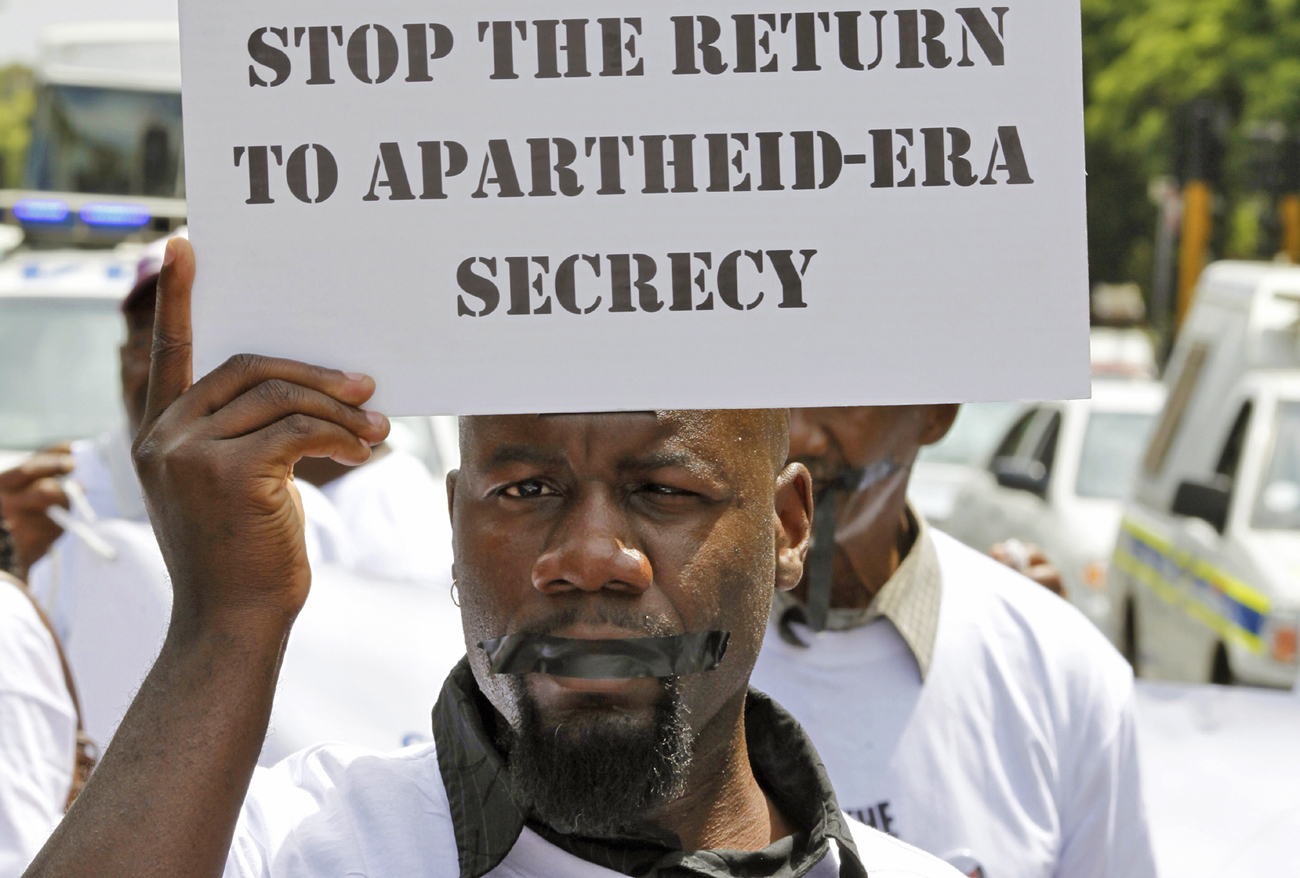 It’s looking increasingly as if, despite days of MPs “working nicely together”, the Secrecy Bill will become law this Parliamentary session – and almost certainly face an immediate Constitutional Court challenge. By THERESA MALLINSON.

Although nearly all the MPs who spoke at the debate congratulated the ad hoc committee on working nicely together, there remain several issues on which they disagree strongly – most notably the inclusion of a public-interest defence, or lack thereof. Still, it looks increasingly likely the controversial Protection of State Information Bill will be voted into law before the end of this Parliamentary session. But civil society groups – and, most importantly, Cosatu – are standing firm in their intention to take the matter to the Constitutional Court, if needs be.

Minister of state security Siyabonga Cwele was the first to speak during Wednesday afternoon’s national assembly debate. Cwele stated: “The African National Congress believes that the changes made to the bill are a correct response to the valid concerns raised by fellow South Africans during the protracted engagements.” However, he made it clear that the public-interest defence, and public-domain defences will not be accommodated in the bill.

All the opposition parties stated they would vote against the bill, with the exception of Cope, which did not indicate which way it would vote. Democratic Alliance MP David Maynier’s speech was particularly hard-hitting. “I have no doubt that if Nelson Mandela were present here today he would have had the courage to join the opposition in speaking out against the Secrecy Bill,” he said.

Chairman of the ad hoc committee on “Posib”, Luwellyn Landers, was caustic in his dismissal of civil-society efforts to protest the bill. “One wonders whether the Right2Know Campaign should now be referred to as the Right2Lie campaign,” he said, referring to a memorandum the organisation had handed over to eThekweni officials earlier in the month, which did not acknowledge amendments to the bill.

Right2 Know issued a statement in response, saying: “The memorandum Landers referred to was a copy of the Right2Know founding statement (launched 31 August 2010) that was handed to eThekwini officials at a Right2Know rally on 5 November to highlight community concerns about the failure thus far to deal comprehensively with all demands by civil society and tens of thousands of South Africans. It is sad and deeply disappointing to see Landers dismiss these concerns with such vitriol… That Landers failed to recognise the memorandum as the Right2Know founding statement shows him to be completely out of touch with the concerns raised about the Secrecy Bill.”

But Right2Know’s national coordinator Murray Hunter was more concerned about Cwele’s earlier statements on espionage – and his underhanded dig at Right2Know’s supposed foreign funders. “We have, through sections 36 to 38 of the bill, made espionage a serious offence that will be a deterrent to both foreign spies and their collaborators,” Cwele said. “However, you won’t find foreign spies openly marching in the streets of Cape Town complaining that we are removing their easy access to our sensitive information, but they will fund their local proxies to defend their illegality.”

“We have no foreign funders,” Hunter told Daily Maverick. In fact, Right2Know’s website openly discloses the campaign’s funders, which are the Open Society Foundation of South Africa, the Claude Leon Foundation, and the Foundation for Human Rights (which is itself funded by the department of justice & constitutional development). Hunter noted that Right2Know is happy to disclose all funding details and at open public meetings the organisation regularly distributes its financial statements. In short, the organisation practices what it preaches – openness and transparency.

Back to the bill itself – at the end of the session ANC chief whip Mathole Motshekga agreed with IFP MP Mario Ambrosini (him of the filibustering tactics) that the ad hoc committee on Posib should be reconstituted, comprised of its original members and with the same terms of reference. He stated it should complete its work by 21 November, so that it can be discussed in Parliament then. That’s on Monday, in case you didn’t realise, meaning the committee will not have time to make substantial alterations to the bill.

Contrary to deputy president Kgalema Motlanthe’s assurances last week that: “We will not use numbers to ram through willy-nilly any piece of legislation that does not comply with the Constitution”, it seems probable the ANC will do exactly that. Rather than become depressed by the latest turn of events, the Right2Know campaign is galvanised to continue fighting the good fight. A statement issued on Wednesday evening read: “It is natural that in a functioning democracy, democratic representatives should be made to feel uncomfortable when they attempt to undermine basic rights like the right to access information, the freedom of expression and right to exercise accountability over government. It is also worth noting that these are not rights that belong only the media, and it is not the media who constitute the Right2Know campaign – these are the rights of all people; they are rights that are central to all struggles for social justice and they are rights that we will continue to mobilise for!”

The ANC can be as dismissive as it likes of the work of Right2Knows in mobilising civil society, but it shouldn’t forget that its own alliance partner, Cosatu, isn’t exactly happy about the situation either. In a lengthy statement on Wednesday evening, Cosatu spokesman Patrick Craven roundly condemned the lack of the promised further consultation, as well as drawing attention to several problematic aspects of the bill. “Further noting the serious problems that continue to plague the process around the bill, we believe that it would be more advisable to withdraw the bill from Parliament and refer it to the South African Law Reform Commission to investigate how state information may be appropriately regulated,” the statement read.

And Cosatu’s commitment to a Constitutional challenge, should the bill pass, is loud and clear. “Should the Bill that is eventually passed by Parliament still contain fundamental problems, we will have no option (but) to revert to our earlier undertaking to pursue the matter through a Constitutional legal challenge,” Craven said. The ANC may win this skirmish in Parliament, but the battle to protect access to information is far from over. DM