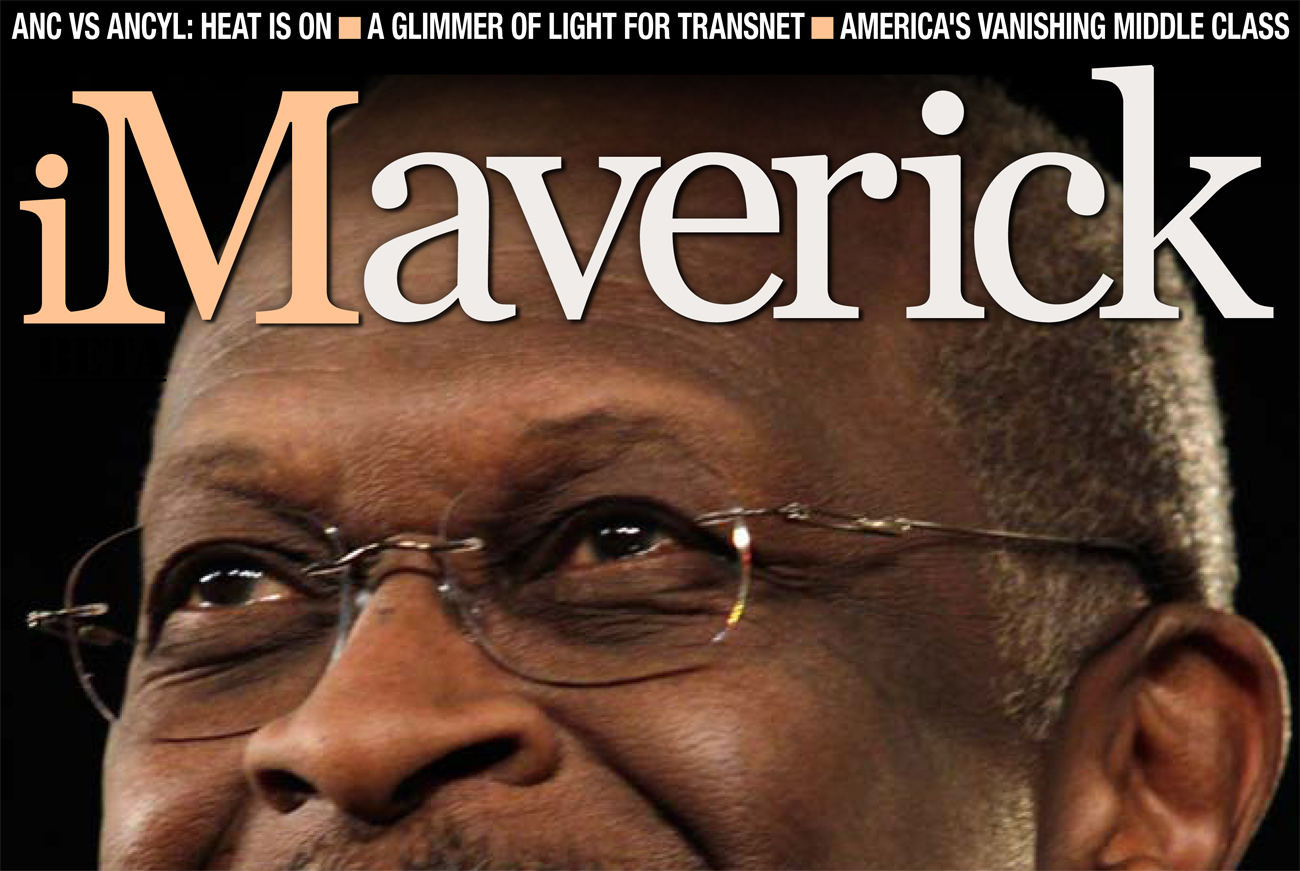 Herman Cain: the man who would be king is naked; ANC vs ANCYL: the heat is on; a glimmer of light for Transnet; and America's vanishing middle class. By iMAVERICK TEAM.

It was an act of hubris, really. When Nigerian President Goodluck Jonathan chose to award novelist Chinua Achebe, perhaps Nigeria’s most famous son, one of the country’s top honours, he thought it would be a glowing endorsement of his government. But like most acts of hubris, it backfired – badly. By SIMON ALLISON.

Timothy Kalyegira hasn’t had an easy time ever since he dared to question his government’s official line on the 2010 World Cup bombings. Now his case is finally coming to court, but the prosecution seems a little confused as to what to charge him with. By THERESA MALLINSON.

Kenya’s not doing much to help itself. It’s Somali adventure is stuck in the mud, tensions are increasing at home and now the country has gone and made its biggest foreign policy blunder to date – allying with Israel, a move that will only make Somalis hate them more. By SIMON ALLISON.

On Sunday Egyptian blogger Alaa Abd El Fattah, who was originally detained by the military on 31 October, was sentenced to a further 15 days in prison. Sadly, Egypt’s current military rulers seem no more tolerant of criticism than the Mubarak regime. By THERESA MALLINSON.

Syrian President Bashar al-Assad’s refusal to halt his government’s violence against its own people has made his departure from power inevitable, a senior Saudi prince said on Tuesday. Prince Turki al-Faisal, the former chief of Saudi intelligence services, said Assad had made his position clear by failing to live up to commitments made under an Arab League initiative to stop the bloodshed and start political dialogue. By ANDREW QUINN (Reuters).

GLIMMER OF LIGHT AT THE END OF THE TRANSNET TUNNEL

After years of bad news at Transnet, we’re getting a flicker of some good news from Transnet Freight Rail. At a press conference on Tuesday, TFR chief executive Siyabonga Gama announced the company would be implementing scheduled rail links. The successful implementation will be one step closer to an efficient railway service and, hopefully, fewer trucks on our roads. By SIPHO HLONGWANE.

ANCYL’S REFUSAL TO APOLOGISE RATCHETS UP THE HEAT

The leadership of the ANC Youth League knows that it has a mountain to climb. Well, if it doesn’t, it’s really time to ask how the weather is on Planet Zog. And it’s going to face several tests – of character, of political acumen, of sheer brains – in its bid to get out the deep hole that has been dug for it. On Tuesday, it appears, the League failed its first test. By STEPHEN GROOTES.

The Independent Complaints Directorate was hauled before the parliamentary portfolio committee on police to explain its lease of City Forum, the Roux Shabangu-owned building that dramatically increased its operating lease expenditure. The last time the businessman’s name came up in a justice-cluster operating lease, a minister lost her job and the national police commissioner was suspended. BY OSIAME MOLEFE.

Helen Zille’s desire to criminalise HIV, and require mandatory HIV testing is an understandable reaction to a national crisis. But the required policies would not only be illiberal, but probably also ineffective.

PAUL BERKOWITZ: HELEN ZILLE AND THE CASE OF THE BAD LAW

The leader of the opposition and Premier of Western Cape has copped a lot of flak for her Twitter comments this week. She suggested that men who sleep around and don’t use condoms should be charged with attempted murder. Pretty poor suggestion, I think.

With less than two weeks to the start of the Cop-17 conference in Durban, consensus on the most critical issues remains elusive. One of the most contentious issues is the perceived divide between the interests and obligations of developed countries and those of developing countries. By KHADIJA PATEL.

THE GRAND INGA DAM – CAN IT REALLY HAPPEN?

Last weekend, President Jacob Zuma signed an energy deal with the Democratic Republic of Congo. Before your roll your eyes you should know that isn’t just any energy deal. It’s the one that’s going to save Africa. By SIMON ALLISON.

It must be everyone’s worst nightmare – it’s the morning of your final exam and you suddenly realise you didn’t read the required books or attend any of the lectures. In politics, of course, it is that moment of truth on national television or before a room filled with journalists when it becomes plain to everyone that the candidate simply hasn’t done his (or her) homework and was hoping a great smile and some clever one-liners were sufficient. Er, not really. By J BROOKS SPECTOR.

China appeared keen on Tuesday to avoid a quarrel with the United States over trade and currency stances, stressing that the world’s two biggest economies share a stake in stable ties. By CHRIS BUCKLEY (Reuters).

Popular futurists from Alvin Toffler to John Nesbitt have been mostly pretty accurate in predicting the impact of the Informatoin Age on societies in the developed world. But few, if any, could have factored in the impact of the global economic crisis sparked in 2008. South Africa has much to learn from what’s happening to middle-class USA. By J BROOKS SPECTOR.

With one of the world’s most expensive yachts and a cricket and Formula One team, Kingfisher Airlines’ billionaire Chairman Vijay Mallya is known as “King of the Good Times” for a jet set lifestyle that shadowed India’s own rise as an economic power. Now India’s “Richard Branson”, a symbol of the hands-on, publicity-hungry and ambitious Indian entrepreneur, faces the possible collapse of his debt-ridden Kingfisher Airlines – and some soul searching about his extravagance. By ALISTAIR SCRUTTON and SANJEEV CHOUDHARY (Reuters).

US Defense Secretary Leon Panetta spelled out a doomsday scenario on Monday that he said could occur if Congress fails to take action to avoid a $1 trillion cut in US defense spending over the next decade. By DAVID ALEXANDER (Reuters).

It’s “Zoo-ccotti Park”, as some have taken to calling Occupy Wall Street’s “ground zero”. Once a refuge for finance industry workers lucky enough to get a chance to eat a $12 sandwich outside of their cubicle, it has become the centre of a worldwide protest movement. No longer. New York’s own Operation Clean Up The Filth has begun. By RICHARD POPLAK.

Old foes Rafa Nadal and Roger Federer will meet in the group stage of the ATP World Tour finals starting in London on Sunday while world number one Novak Djokovic will clash with number three Andy Murray. By MARK MEADOWS (Reuters).

MICHAEL PHELPS IS HEAD AND SHOULDERS ABOVE THE REST

The 2012 London Olympics are still more than seven months away but Michael Phelps is already one of the biggest winners. By JULIAN LINDEN (Reuters).

US DENIES SECURITY SPAT WITH BRITAIN

The United States on Tuesday denied a newspaper report it was unhappy with British security arrangements at next summer’s Olympics and said talk of a diplomatic row as “simply untrue”. By AVRIL ORMSBY (Reuters).

While the Presidents Cup has often given the United States bragging rights over their International opponents, they face a stern test at the Royal Melbourne Golf Club, the venue of their sole loss in the biennial tournament in 1998. By IAN RANSOM (Reuters).

Jerry Sandusky, the former Penn State University assistant football coach charged with child sex abuse, says he is not a paedophile, but admits he showered with young boys. By ERNEST SCHEYDER and JAMES B. KELLEHER (Reuters).