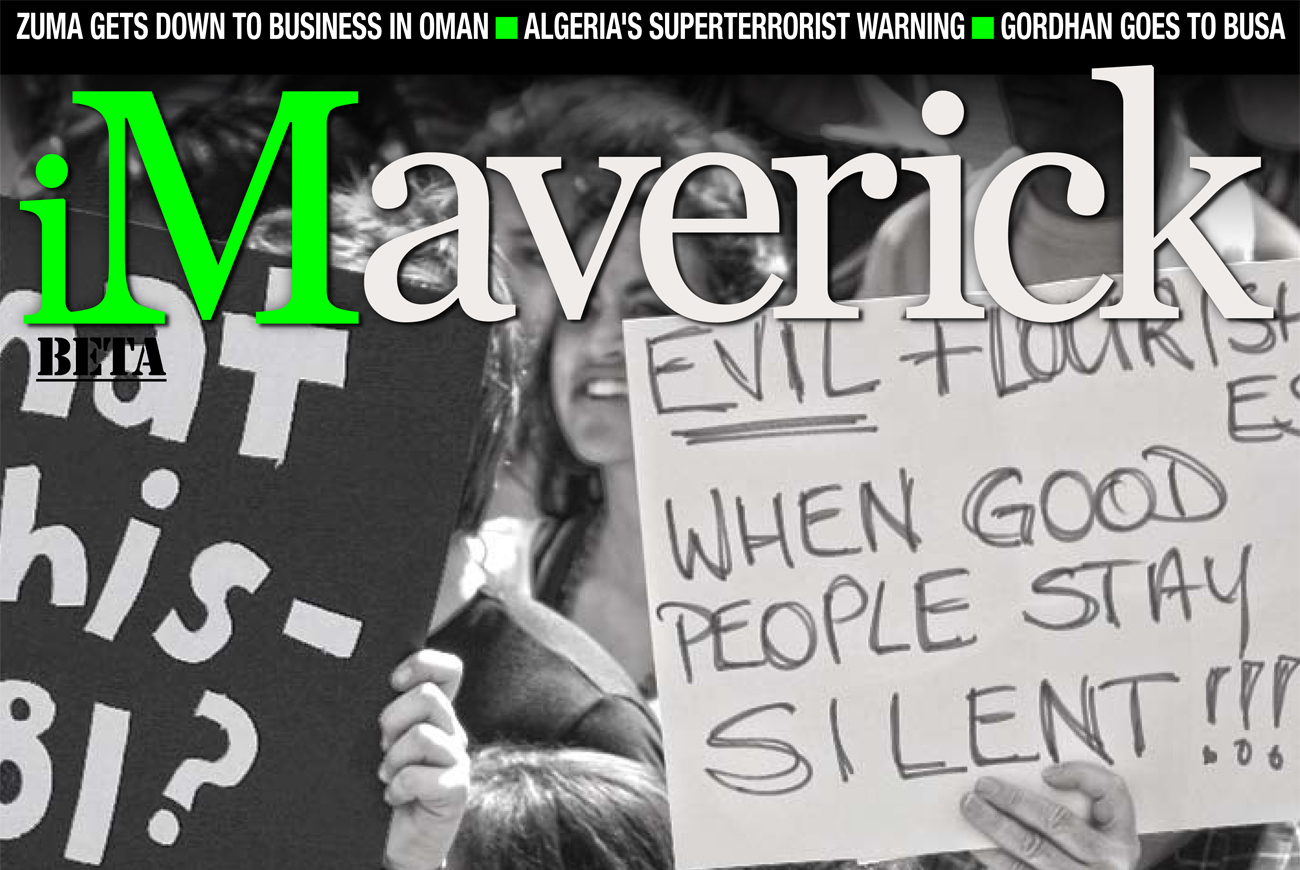 A huge arms shipment has arrived in Zimbabwe, courtesy of Beijing. Good news for one of the factions jostling to succeed Mugabe, but bad news for anyone who hoped Zimbabwe could peacefully negotiate the exceedingly difficult challenges facing it in the coming months. By SIMON ALLISON.

Rumours of Bingu wa Mutharika’s death have been greatly exaggerated, apparently. He’s just on holiday in Hong Kong and Portugal. For a month. In the middle of a political crisis. Without telling anyone. Not the Malawian president’s best move. By SIMON ALLISON.

Anders Breivik shocked Norway, and the world, with his island massacre of children at a political retreat, coupled with the bomb he exploded outside a government office in the capital in July. He must be crazy, we all thought. He’s not, says the judge. By SIMON ALLISON.

A US Predator drone operation that gathers intelligence to help Turkey in its struggle with Kurdish militants in northern Iraq has shifted its base to southern Turkey from Iraq, a Pentagon spokesman said on Monday.

China has overtaken Japan to become the world’s second biggest spender on industrial research and development (R&D), trailing only the United States, a report by the United Nations said on Monday. By Robert Evans (Reuters).

AS PROTECTION OF STATE INFORMATION BILL HEADS BACK TO PARLIAMENT, OPPONENTS GEAR UP FOR ANOTHER SKIRMISH

The ANC recently promised that the Protection of State Information Bill would see further public consultation. As such, its re-tabling at the National Assembly as early as this Wednesday has come as something of a shock – particularly in light of Deputy President Kgalema Motlanthe’s soothing address to the press last week about the possible inclusion of a public-interest defence. It is difficult to trust Motlanthe on this one, and the fight for access to information will continue – all the way to the Constitutional Court if it comes to that. By THERESA MALLINSON.

ZUMA GETS DOWN TO BUSINESS IN THE MIDDLE EAST

President Jacob Zuma continued his tour of the Arabian Gulf on Tuesday. He is expected to sign a “Supplementary Protocol amending the Agreement for the Avoidance of Double Taxation and Prevention of Fiscal Evasion with Respect to Taxes on Income” in Oman – the so-called “sleepy Sultanate”. By KHADIJA PATEL.

THE GREAT RENTAL DEBATE: GROOTES RESPONDS, or: LANDLORDS VS. TENANTS, RIGHT VS. RIGHTS

The fine balance of the rights of landlords versus the rights of tenants is one of the big debates of our time. Or it certainly should be. It relates to how we balance the rights of rich and poor, and that old problem of property: when is a right limited and when is it not. But it must also be about wealth creation, the idea that we cannot just sit where we are now and leave it at that. By STEPHEN GROOTES.

No cabinet minister has disagreed with the National Planning Commission’s National Development Plan. On the contrary, the presidency has accepted it, and on Monday morning, the finance minister cited it approvingly in his speech at the Business Unity South Africa annual general meeting. By SIPHO HLONGWANE.

Chill, Capetonians. Table Mountain isn’t all that special, despite what a preposterous Internet vote may have determined. The New7Wonders hustle neatly demonstrates the shortcomings of public opinion polls.

Terrorism is going pan-African as more and more reports emerge that two of the continent’s major terrorist organisations are cooperating with each other. But focussing on the international threat posed by al Qaeda in the Islamic Maghreb and Boko Haram might obscure their very local motivations. By SIMON ALLISON.

Other tabloids besides Rupert Murdoch’s News of the World may have hacked phones, a London court heard on Monday as it began an investigation into newspaper practices that could lead to tougher regulation of the entire UK press. By Georgina Prodhan (Reuters).

Britain is ready to use missiles to protect next year’s London Olympics from an airborne attack, Defence Minister Philip Hammond said on Monday, amid reports the United States was unhappy with security plans for the games. By Tim Castle (Reuters).

Considered by many Pakistanis to be public enemy number one, the United States on Monday turned to the musical descendents of rap group Public Enemy in an attempt to counter its highly unpopular image in the south Asian nation. By Chris Allbritton (Reuters).

MENOPAUSE ISN’T QUITE SO TAME, BUT STILL FUN

Comedy is always funnier when it pokes fun at a subject close to your heart, so it was obvious the opening night of Menopause The Musical was going to be a huge success. As the audience trooped in there were large ladies, svelte ladies, some Botoxed, some plastered with make-up, some bare-faced and hippyish, and several already having hot flushes in the foyer. Yes, writes LESLEY STONES, the audience members were decidedly menopausal, especially the middle-aged men accompanying them.

STYLI CHARALAMBOUS: MIRROR, MIRROR ON THE WALL, WHO IS THE BEST SPRINGBOK COACH OF ALL?

With the RWC ’11 debacle speeding away in our rear- view mirror, and the end-of-year tour about to stretch already tired legs, we turn our focus to who the next Bok coach should be, and who it’s likely to be.

Germany are eager to beat rivals Netherlands in Tuesday’s friendly and sent a clear message to all fellow Euro 2012 contenders that they are ready for their first title since 1996, team manager Oliver Bierhoff has said. By Karolos Grohmann (Reuters).