Rocinha gets a Brazilian – time to tidy up a nation for a party. What South Africa says about Brazil, and vice versa 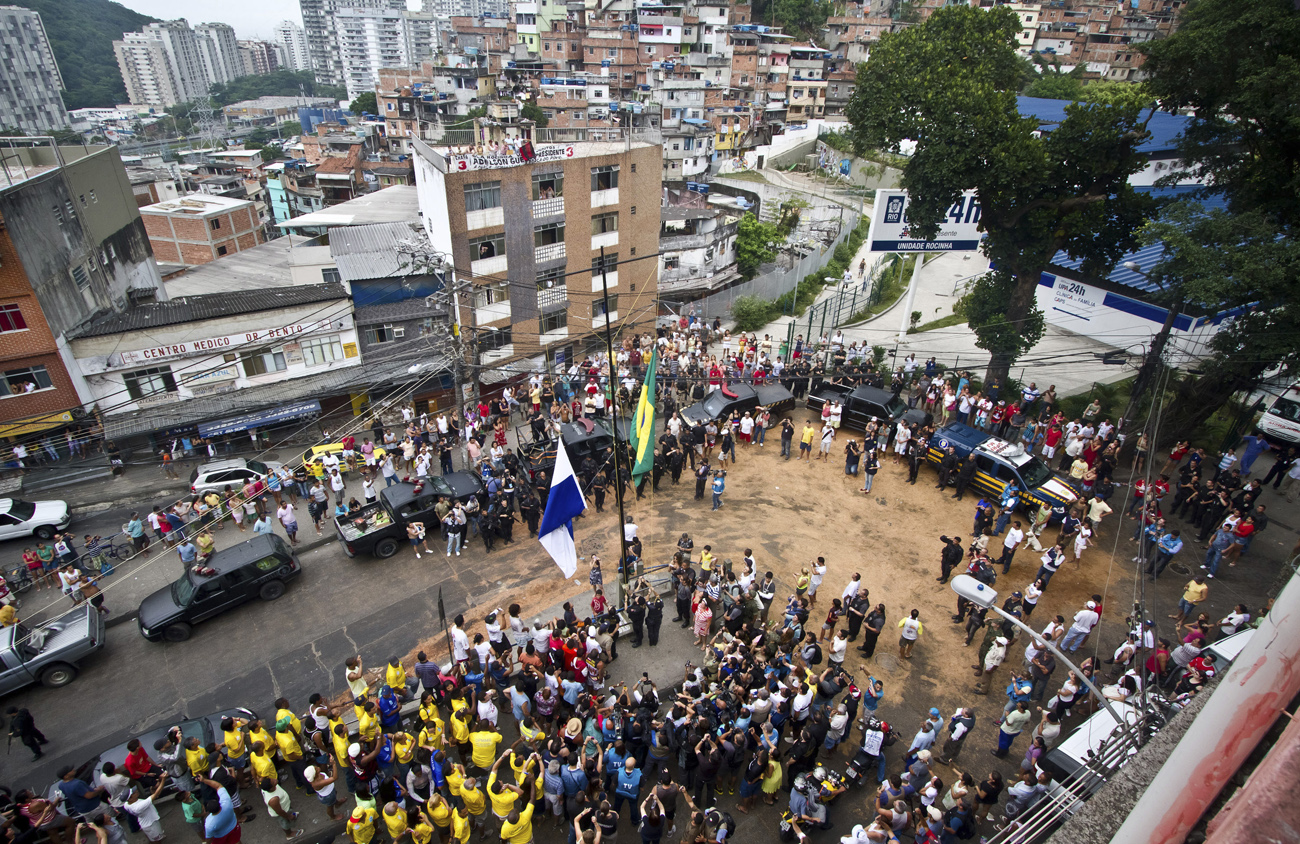 On Sunday, at 4am local time, the Brazilian government moved three thousand troops, backed by major military hardware, into the mean streets of Rio de Janeiro’s largest slum—Rocinha. The sprawling area is home to almost 100,000 people, and it overlooks some of the city’s swankest areas. What does this mean for the city’s FIFA World Cup 2014 and Olympics 2016 preparations? And what does it say about South Africa’s own World Cup —now almost lost in the mists of time? In a word: everything. By RICHARD POPLAK.

Famously, the citizens of Brazil’s favelas do not have it so good. They are the country’s disenfranchised, a hangover of the bad old days when Brazil didn’t put the “B” in “Brics”, and before it was one of the world’s most powerful emerging economies. The slums that pock Rio de Janiero are home to almost a million people, and they are a nexus of the South American drug trade, which exists mainly to fuel demand in rich countries, none more so than the United States of America.

The residents of Brazil’s favelas are locked in a geopolitical vice grip that certainly isn’t of their own making. They are trapped inside the machinations of a recently liberalised economy that, for all its vigour, can’t possibly trickle down to heal the wounds of Brazil’s past. The country’s former president, Luis Inacio Lula da Silva, known popularly as Lula, served for the bulk of the zeroes, promising to right Brazil’s historic wrongs with the sort of leftist rhetoric that made Brazil’s bankers and debt holders mighty nervous. They needn’t have worried. It seems to take a genuine lunatic, like Hugo Chavez of Venezuela, to get the wagon off the liberalisation track. For all the bluster and the shine – Lula remains both the most popular politician in Brazil’s history, and one of the most popular in the history of the continent – Lula was not a radical.

It’s difficult to imagine Simon Bolivar, after helping to free Hispanic America from the hated Spanish, backing circuses like a World Cup and an Olympics. And yet Lula was often branded as just such a game-changer. His Worker’s Party would usher in a new age, where Brazil’s voiceless masses would rise up and speak through him. (His brand developed around the fact that he was a shoe-shine boy at the age of 12, and a working man by the age of 14.) Indeed, his grand social projects – primarily Bolsa Familia (Family Allowance) and Fome Zero (Zero Hunger) – are legendary. Pundits have shredded both programs to pieces for their weaknesses (any good South African can no doubt sniff the opportunities for corruption), but combined with the near half a trillion dollars – you read that correctly – of fixed investments pumped into the economy, Brazil shook off its traditional torpor, and rose to claim its place among the family of economic giants.

By the time Lula left office, having helped install a handpicked successor in Dima Roussaf, he had lifted almost 25 million of his countrymen out of poverty. Every former developing world backwater needs a coming out party when it becomes wealthy enough to support a certain number of Mercedes dealerships, and Brazil is no exception. The World Cup one can almost understand – soccer in Brazil is a religion, and blah, blah, blah. But following this up with the Olympics? “You have to keep in mind,” one of the Brazilian World Cup organisers told Radio 702 as our own Finals wound down, “that every year, we hold two of the world’s biggest parties – Carnival, and New Year’s Eve in Rio. We are used to this.”

Perhaps, but one would have expected otherwise from Lula, much as one would once have expected differently from the ANC. One tiptoes around making comparisons between the Worker’s Party and our own ruling class, but on this one fact, we can all agree: They are former radicals who actively backed and financed massive circuses long before their countries were ready for them. They accepted the primacy of symbolic value over actual value. That is a form of magical thinking that the citizens of developing nations cannot afford.

What is the net result of such lapses in reason? There are, of course, the white elephant stadiums and the cost overruns and the utopian transport systems that are woefully inadequate and don’t anyway address the needs of the poor. Mostly, though, they result in a breakdown – or, rather, an acceleration – of the rule of law, which leads to the sort of spectacle that greeted the people of Rocinha on a recent Sunday morning. While on the surface this may seem like a good thing, it is only a net positive if it is undertaken with certain conditions in place. The rule of law, arguably the primary pillar in a civilised society, is never a case of top down authority, but rather bottom up acquiescence.

We agree to be policed, or we are unpolice-able.

That agreement can exist only when the people of a country come to trust the ruling class. Instead: Huey helicopters, armoured vehicles, press-ready armed men and women that looked primped enough to have stepped from a Hollywood movie. Those were the scenes from Rocinha’s recent clean up, which was more of a junket than an act of policing. The drug gangs had been warned weeks in advance, and had cleared out to avoid an unnecessary waste of bullets. The citizens of Rocinha, and slums like it, have a complicated relationship with the narco thugs that effectively run their communities. For one thing, drugs offer one of the few employment opportunities for ambitious young men. For another, they were for many years the only authority in the slums, maintaining order, of a sort, when Rocinha and other hellholes were systematically ignored by the Brazilian government.

Sound familiar? South Africans with long memories recall cops cleansing the streets of Durbin urchins, dumping them miles outside the city for the duration of our World Cup festivities. These, and other fascist-style activities, are the hallmark of celebratory events. Whereas London’s 2012 Olympics will likely be the one of the most heavily policed events in human history, in terms of cops per capita, this is because of the shadow of terrorist threats, and less a result of the streak of British social pathology politely described as hooliganism.

Brazil is a different story altogether. Brazil is cleaning up its slums – smearing make-up over social problems that have been resilient to ten years of Lula-fication. South Africa did much the same thing. For all the ballyhoo about crime, with police swarming our streets, there were few incidents of note. After the paroxysms of violent crime that almost ripped this country apart in the 90s and zeroes, South Africa has fallen into dismal boilerplate – crime happens mostly to the poor, by the poor. We haven’t consented to be policed, because like Brazilians, we boom off and protect our wealthy neighbourhoods with private armies, and our poor neighbourhoods are institutionally ignored. Our big party – like Brazil’s big parties – was an opportunity to show that we can act like grown-ups. But these are really big, really expensive brochures that endeavour to bury social realities, rather than help solve them.

It remains to be seen whether our Brics partner will be willing, and able, to redress the issue of their citizens consenting to be policed. But Brazil’s slums need more than heavily armed photo-ops. Nobody knows this better than South Africans. DM