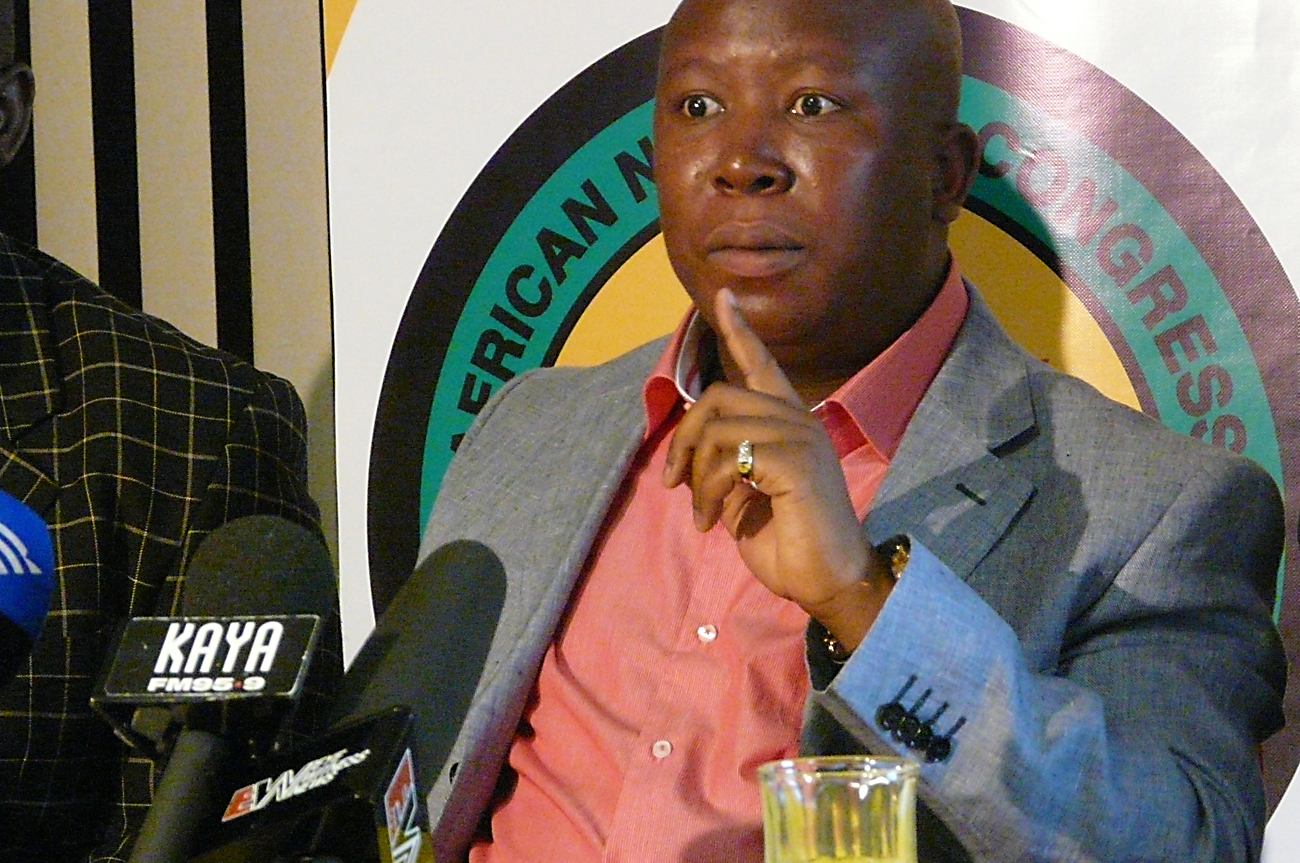 The ANC's national disciplinary panel verdict in the case of the ANC's middle ground versus Julius Malema is the end of a chapter in our politics. And thus begins a new chapter. There are several questions to be asked, several issues that we are only now beginning to see as important that are now being raised. By STEPHEN GROOTES.

Over the last three years Malema has been seen as representing an important demographic, the young unemployed. These numbers are growing; thus goes the theory that Malema’s power was growing too. That leads to perhaps the biggest question facing us in the post-Malema vs. Jacob Zuma world: will, and can, Malema go it alone? Could the events of last week be the start of an even bigger shake up in our politics?

First, we need to start off with something the ANC is going to miss hugely with the suspension of its no-longer-favourite Young Lion. One of the great roles he used to play for the ANC, for the government and for the country at large, was to siphon anger. Remember how he used to go to “service delivery” protests and have a good shout at the country’s leaders. He would be angrier than the protesters. And he would shout and scream about how he was going to make sure government and the ANC would change things on the ground. As a result, the anger would lessen. Malema was the ANC’s anger-siphoner-in-chief, a safety valve for the party. It has now lost that valve. And as any steam engine driver will tell you, without that valve, you can run into trouble.

But the ANC’s problem goes deeper than that. Instead of having a valve, the very instrument that used to cool things down now has a vested interest in adding on the pressure, in heating things up. As a result, should Malema decide there is indeed a post-ANC political future for his less than svelte self, he will know exactly how to put the ANC under pressure. You can imagine the scene. An informal settlement about to boil over with rage and anger at a system that is not working, and certainly not working for its residents. Malema shows up on the back of a bakkie with a loudhailer and some cameras; he will explain, loudly and confidently, how he tried to change the party from the inside, but failed. How it wasn’t his fault, but the fault of other people who are still in charge, who are responsible for what’s happening now. And when he got too loud, he was thrown out.

He will be the hero, worshipped by the mass of people with absolutely nothing to lose. I’ve suggested before that the Left of our politics could be just one “Obama-type candidate” away from real power. In other words, conditions on the ground don’t change, and someone comes along and grabs the imagination of those who are not benefitting from voting for the ANC. Malema would no doubt dearly love to be that person.

However he has a massive Achilles heel that we have now learnt about.

First, an admission. Earlier this year, I wrote a story explaining how Malema was one of the biggest political minds of our time. If you are one of those who love it when I’m wrong, it’s worth another read. I also suggested that Malema had reshaped the ANC Youth League in his own image, there was now no difference between the two.

There was something I missed. It was the simple fact that actually, what had started to happen was that the League was being hollowed out. Malema had decided that loyalty was far more important to him than competence. Let me go back a bit. You may remember that at the League’s conference this year, the one where he called for “radical policy change“, where he was re-elected unopposed, he was able to pick and choose who would be the League’s other national leaders. Basically, the other members of the League’s top five were handpicked by him. In the crucial role of secretary-general, he picked Sindiso Magaqa. Magaqa was the deputy leader of the League in KwaZulu-Natal. Bear in mind the role of SG is to run the organisation, Magaqa was to be Malema’s Gwede Mantashe. But it was the KZN province of the League that decided to buck Malema. It was the one that, in open revolt, refused to send its members to protest outside Luthuli House at the start of the disciplinary hearing. Then Malema decided to disband the League’s provincial executive committee there. (The issue is still pending before the national ANC.)

In essence what you had was that the SG of the League could not even influence his own province. That’s a big problem for Malema.

When we look at the other national leaders of the League, we start to see the same pattern. Shouting, screaming and loyalty were the values that Malema picked, rather than organisational competence. Anyone who he thought might disagree with him was not selected. As a result, he had no real brains trust, no kitchen cabinet that could actually help him with anything. There is no one, apart from League treasurer Pule Mabe, to kick ideas around with.

It tells us that Malema is not someone who is able to organise as effectively as we thought he could. And if there’s one thing that you absolutely need when you want to get a new political organisation off the ground, it’s organisation. Ask our good friends at Cope.

The reason the DA has been able to survive and strive so well is because it gets organisation right. The reason the ANC is still in power is because it has found ways to manage dissent. It still finds it tricky, but it muddles through. This requires large doses of tolerance, and the trick of counting to at least one hundred before speaking. Malema’s preferred method of managing dissenters would be to line them all up and use whatever weapon was available.

Anyone with pretensions of long-term power, within any group worthy of working with, needs to get to this right. It’s the hard complex technical stuff, the boring meetings night after night, every Sunday afternoon in another small hot dorpie, sitting around and listening to the mundane complaints of small community after small community. It’s extremely boring, but without it, your organisation is nothing. Malema simply doesn’t have the patience for this. He could get around that if he had someone who did, someone who he trusted. One of the reasons Zuma is beginning to tighten his grip on power now is because it’s taken Mantashe nearly four years to get all the boring technical stuff right. Simply put, Malema has no Mantashe. Funny, isn’t it?

The one thing that Malema would seem to have in spades at the moment is money. That is crucial to get going in politics. But the money won’t last forever. Especially when the Hawks, SARS and the police themselves come a-calling. And he is also losing access to making more money. And come, there’s no evidence to show that Malema would win the “saver of the year” award. Quite frankly, he’s far keener on partying it away.

In the final analysis, a post-ANC Malema is still going to be an interesting figure. But I wouldn’t put too much money on him being the one to really take on the unemployed youth vote and transfer it into power. However there is bound to have been several people who have watched how he’s done it with great interest. Someone will have learnt his lessons. Eventually, that person will appear. DM