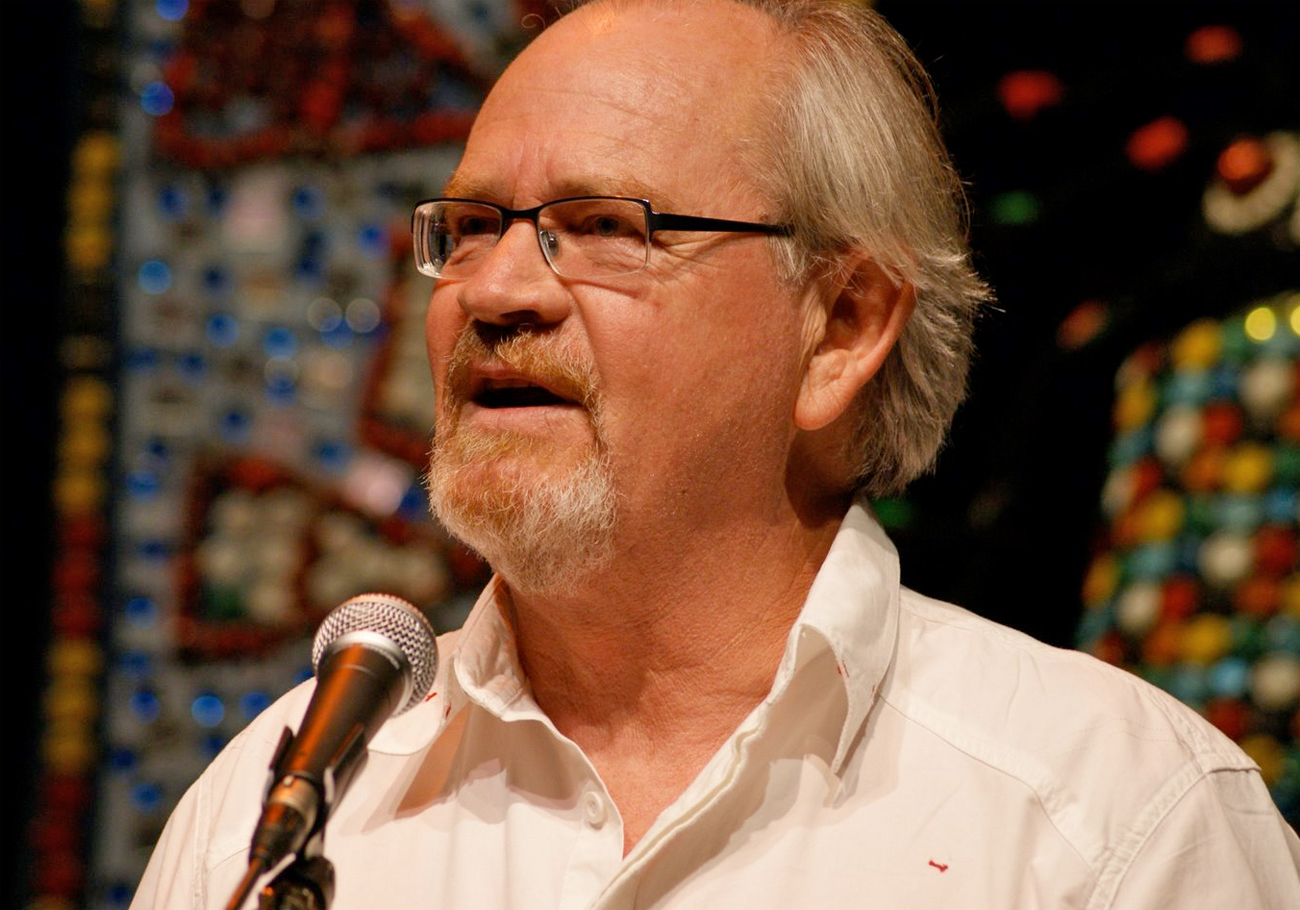 He’s the man who caused an outcry when he said, during the hushed times of Thabo Mbeki, that discussing the aloof former president’s “womanising” was fair game. He’s made Jackson Mthembu froth at the mouth, and it’s unlikely he’s going to be invited to the ANC’s centenary celebrations. Not that it’s likely that Max du Preez gives a damn, given he’s one of the few locals who isn’t afraid of wading deep where lesser men fear to tread. By MANDY DE WAAL (@mandyldewaal)

South Africa’s public discourse has been hijacked by the loud, the angry and the embittered. This because the local media is mostly like puppets on a string, one jerk and there’s a slavish reaction. That’s the view of unashamedly outspoken author and veteran Afrikaner editor Max du Preez.

“The shouters are dominating the discourse; the thinkers are cowering in the corner. (OK, there are a few exceptions, but far too few). The ANC Youth League and AfriForum are the loudest voices – courtesy of our shallow, knee-jerk media,” says Du Preez, who doesn’t pull punches or suffer from the virus of political expediency that’s so rampant in this country.

Max doesn’t suffer from the need to be liked or approved of. One of the few unmoderated opinions; one that isn’t afraid to rise above the huddled crowd hiding from the racial epithets and insults that fly freely, and all too often, achieve their goal of quashing dissent.

“Black Anger and White Victimhood have become causes and debates in themselves, instead of being analysed and contextualised. It is good that we talk about race, but not good that we can’t get beyond accusing and defending,” says Du Preez.

“The rich don’t give a shit – why spend energy on a debate if you can spend it on making more bucks and stay under the radar? And the poor pale progressives have been bullied into a whispering debate on the sides about their ‘whiteness’ and whether in fact they’re allowed to have an opinion, and if so, how they should voice it so as not to offend the Andile Mngxitamas of this world,” opines Du Preez, who adds that too many intellectuals seem to have their eye on their bank balance and future fortunes when they express their opinion – and on staying on the A-list of invitations. It appears that in South Africa, A-listers don’t want to miss the opportunity to be seen at a wedding in Mauritius or to be invited to the ANC’s up-and-coming R100 million centenary celebrations.

“Most thought leaders are scared of being given one of the labels of the day: loony leftist, counter-revolutionary, reactionary, ‘drinking Zille’s Kool-Aid’, narrow nationalist, Africanist, coconut, BEE-type, racist, Mbeki-ite. A last gripe on this score: we really need our public commentators to do a little bit more than give us their latest take on who’s who in the ANC’s factional battles and what Julius Malema really means,” says Du Preez, before landing the killer punch: “Some commentators play an active role in furthering one or other of these factions.”

Du Preez isn’t pointing any fingers but who hasn’t picked up a Sunday paper to read a story that quotes “sources speaking on the condition of anonymity” that is nothing more than a thinly veiled character assassination in the ongoing power struggle that is the ruling party?

The fearless former founder of Vrye Weekblad, who clearly doesn’t give a shit about whether or not he’s on the political elites’ Christmas card list, has been putting ruling class noses out of joint even before his newspaper offices were bombed because he had pierced the underbelly of apartheid spooks, despots and murderous henchmen. When you don’t know whether you’ll live long enough to print the next issue, questioning the moral courage of SA’s intellectuals is a bit of a walk in the park.

This straight shooter says that local intellectuals don’t exactly want to stand up straight and that South Africa doesn’t exactly have a rich tradition of “thought leaders” leading public discourse. He laments that things are getting worse. “Still, we have a few remarkable and brave thinkers such as Njabulo Ndebele, Mampela Ramphele, Neville Alexander, Joel Netshitenze, Stephen Friedman and others – Eusebius McKaiser is a welcome recent addition. Most academics are silent, publishing obscure papers in obscure academic journals or just quietly waiting to go on pension.”

Maaifoedies incident aside, Du Preez tends to call the trolls out of their hidey holes and onto social media networks when he starts talking about black intellectuals and the schisms with the ANC. “Oh, I had a lot of flak on Twitter and Facebook for referring to the ‘black thinking classes’ as if I was casting doubt about black people’s ability to think – in itself an indication how we debate in this society. Would ‘the more intellectually conscious sectors of black society’ be less offensive? Why was my reference to the ‘white thinking classes’ not also suspect?” Du Preez asks.

In case you’ve been living in Kuruman, or another far flung dorpie which hasn’t been saturated by the discerning public discourse that seems to mark our life and times, the “maaifoedies” incident refers to the time, not so long ago, when Du Preez used the M-word on his Facebook page. More so, he used it to refer to the ruling party in the wake of that disaster otherwise known as the Dalai Lama visa debacle. The ANC was livid and thought that Du Preez had labelled its esteemed leadership cadre “mofos”. Du Preez said that Sapa had misquoted him and incorrectly translated the word “maaifoedies” into “motherfuckers” when all it meant was “rascals”.

(Editor’s note: This isn’t the first time Sapa has gotten SA and the ANC into a flap. Remember when Sapa spread the story that Julius Malema had resigned? Remember how every newspaper not worth its salt used the story without even phoning the ANCYL to check whether this was true or not?)

But let’s get back to the issue of Du Preez being crucified for debating the “black thinking classes”, shall we? “Anyway, the point I was trying to make was there is a growing number of black South Africans, mostly young, well-educated urbanites, who do not simply accept The Gospel According to Luthuli House, but are demanding answers and explanations, even though many or most of them remain inside the ANC fold – for now,” he continues.

“The glue of ‘loyalty to our liberators’ and black solidarity are weakening by the day in their case. The present ANC leadership does not cater for them as much as they do for the rural masses, the unemployed or struggling working class. Zanu-PF made the same mistake, and ended up losing the support of most educated urban Zimbabweans.”

Du Preez says that South Africans have become too politically correct, but what this means and how it plays out is different for different people. “For some it means never giving the ruling party and government any credit for anything; for others it means never taking the ANC and government on where it really matters and never giving the political opposition any credit. Most of us are too afraid to offend those we feel are in our primary constituency.”

And the media? Well, let’s just say we’ve saved that Du Preez kick in the gonads for last, now shall we? Max thinks most local media have as much courage and independence as those tight-lipped black intellectuals. “The media are not playing a strong enough role to promote a properly informed public opinion. There are, I’m happy to say, good examples where they do, especially the Mail & Guardian and iMaverick and sometimes the op-ed pages of City Press and other Sunday papers,” he says. “Television plays virtually no role at all, neither does radio. The book that I just edited and the one edited by Moeletsi Mbeki are essential to stimulate and inform the public discourse.”

Du Preez adds that the racists are alive, well and living on News24.com where they: “are still rampant and spew forth their filth unperturbed. The greatest irritation in the present media landscape is the way in which most news and information websites have been handling their comments section,” he says.

“To an increasing number of ordinary citizens, this is their most important way to be a part of the national discourse, to read new opinions and give their own views. In many cases, specifically news24.com, the biggest of its kind in the country, these spaces have deteriorated into racist, intolerant insults and name calling, rendering these sites worthless to sane citizens. Daily Maverick and politicsweb.com have been shining examples of how valuable these sites can be if correspondents are forced to register with their real identities and the contributions are constantly monitored. This is not a freedom of speech issue – or perhaps it is, because the bigoted filth infecting most of these sites is inhibiting the free exchange of ideas.” DM