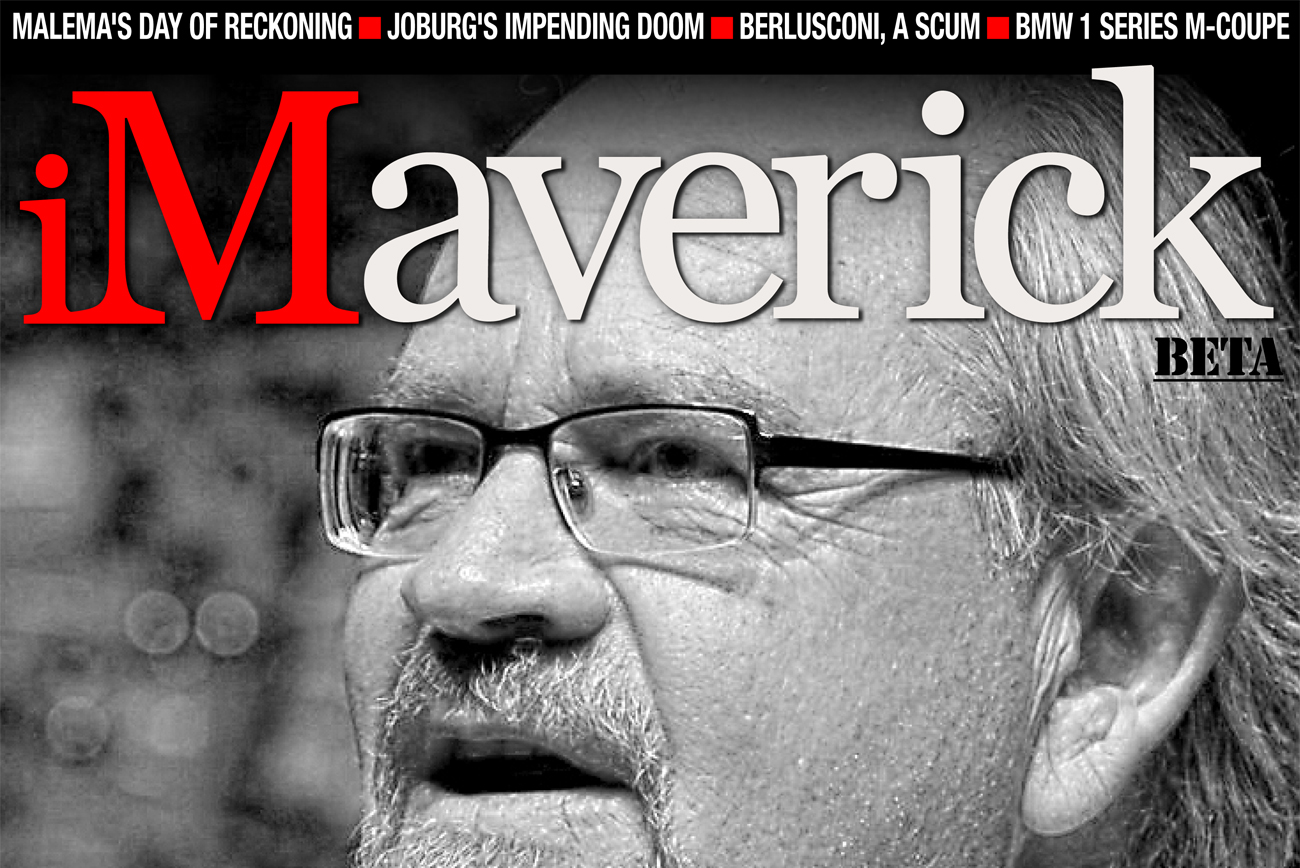 SAMMY TO CHEER TENDULKAR’S 100TH TON
After denying Sachin Tendulkar a 100th international century on Wednesday, West Indies captain Darren Sammy promised to salute the Indian batting great when he reaches the milestone – providing it comes against another side. By AMLAN CHAKRABORTY (Reuters).

South Africa is going through something of a rough patch, thanks to the global recession and political difficulty. Moody’s added on to worries when it downgraded South Africa’s A3 rating outlook to negative. Consider it a “Strike One” on our way to a ratings downgrade. By SIPHO HLONGWANE.

In response to a question by the Democratic Alliance, minister in the presidency Collins Chabane dished out some statistics on the presidential hotline. They don’t tell a pretty story. By SIPHO HLONGWANE.

Liberian President Ellen Sirleaf-Johnson may be the flavour of the month in the international community after being awarded the Nobel Peace Prize in October. But her government’s handling of dissenting voices during Liberia’s election period has been far from peaceful. By THERESA MALLINSON.

After a decades-long civil war was finally resolved with the secession of the south, you’d think Sudan would be ready for a little peace and quiet. Instead, Khartoum is threatening to re-ignite the conflict over an increasingly violent border dispute. By SIMON ALLISON.

Who needs an election when you’ve got plenty of confidence and a bit of bravado? DRC presidential candidate Etienne Tshisekedi pre-empted the polls by virtually anointing himself as head of state on national TV. What hope is there for Congo’s democracy when even the opposition favour the autocratic approach? By SIMON ALLISON.

SARKOZY TOLD OBAMA GREEK PM TOO DOWN TO TAKE TO TASK

French President Nicolas Sarkozy told Barack Obama last week it was not worth attacking Greek Prime Minister George Papandreou over his sudden call for a referendum on the eurozone crisis, describing the decision as the act of a depressed man, according to journalists who overheard the comments. By EMMANUEL JARRY & BRIAN LOVE (Reuters).

So much for shutting down Guantanamo Bay. Obama has not only failed to close the prison, but has reinstated military trials there. The first one began on Wednesday, and has gone one better than any trial organised by George Bush’s administration in contemplating – for the first time – the death penalty. By SIMON ALLISON.

Want to brush up on your knowledge of the Second World War, but don’t have the time? No excuses, these days it’s as easy as following the @RealTimeWWII Twitter account. By THERESA MALLINSON.

It’s D-day for Malema. You’ve seen the billboard so many times already, we can understand if you don’t care that much anymore. But if you take one look at the Moody’s decision to downgrade South Africa’s outlook, you will know that what happens to Julius Malema today matters. Big time. STEPHEN GROOTES.

He’s the man who caused an outcry when he said, during the hushed times of Thabo Mbeki, that discussing the aloof former president’s “womanising” was fair game. He’s made Jackson Mthembu froth at the mouth, and it’s unlikely he’s going to be invited to the ANC’s centenary celebrations. Not that it’s likely that Max du Preez gives a damn, given he’s one of the few locals who isn’t afraid of wading deep where lesser men fear to tread. By MANDY DE WAAL.

The City of Johannesburg is running out of money, and the notorious billing crisis ain’t nothing compared to what would happen should the city fail to pay. The DA councillors Patrick Atkinson, John Mendelsohn and the party’s caucus leader in the city council Mmusi Maimane delivered the dour statement to the media on Wednesday morning. By SIPHO HLONGWANE.

Stephen Grootes’ article, “Landlord’s rights, the final frontier” (4 November 2011), is riddled with misconceptions. His comments about the Maphango case, heard by the Constitutional Court last week, bear little relation to what that case is about.

They’re taking their sweet time, the Kenyan military. Despite launching their incursion (some say invasion) into Somalia nearly three weeks ago in a firestorm of bravado, they’ve yet to encounter Al Shabaab properly, and haven’t managed to get near the enemy’s stronghold, the port of Kismayo, only a couple of hundred kilometres from the Kenyan-Somali border. So what’s taking them so long? By SIMON ALLISON.

it’s not difficult to imagine Silvio Berlusconi’s Italian leadership is dead, mostly because he pastes so much make-up on his Botoxed visage that he looks like he’s lying in state. Is this it for the scourge of Italian politics? It looks that way. And the most incredibly thing of all? It isn’t Italians who’ll be kicking him out of office, but Italy’s debt holders, who are about as Italian as a deep dish Hawaiian pizza. On Silvio Berlusconi, and the end of democracy in Europe. By RICHARD POPLAK.

Italy’s president stepped in to try to calm markets on Wednesday after the country’s borrowing costs raced to catastrophic levels, saying urgent action would be taken to end a political crisis. By BARRY MOODY (Reuters).

German and French officials have discussed plans for a radical overhaul of the European Union that would involve setting up a more integrated and potentially smaller eurozone, EU sources say. By JULIEN TOYER and ANNIKA BREIDTHARDT (Reuters).

REVIEW: GARETH CLIFF ON NOTHING MUCH

There’s a difference between being opinionated and holding a well-constructed opinion. For all his shock-jock image, Gareth Cliff seems to believe he has some seriously thought-out arguments to share with us. We don’t doubt he’s capable of this; it’s just pity they don’t make an appearance in his first book. By THERESA MALLINSON.

The arrival of the MBW1-Series M Coupe has not been met with enthusiasm from all quarters. Designed to bring the magic of the M-badge to a wider audience, some consider it a brash upstart without the pedigree required for admittance to the M-car fold. Others recognise a thrilling driving machine when they see one. By DEON SCHOEMAN.

After denying Sachin Tendulkar a 100th international century on Wednesday, West Indies captain Darren Sammy promised to salute the Indian batting great when he reaches the milestone – providing it comes against another side. By AMLAN CHAKRABORTY (Reuters).

The IAAF need to strike a balance between taking athletics to new markets and maintaining the sport’s popularity in Western Europe, meeting organisers said ahead of this week’s decision to choose London or Doha as 2017 world championship hosts. By JUSTIN PALMER (Reuters).

Captain Michael Clarke defied a rampant Dale Steyn with an authoritative century to keep Australia afloat on the opening day of the first test against South Africa at Newlands on Wednesday. By KEN BORLAND (Reuters).

Brazil must hurry up and pass a package of new laws if the 2014 World Cup is to go ahead, FIFA secretary general Jerome Valcke told the country’s Congress on Tuesday, adding there was “not a day to lose”. By PETER MURPHY (Reuters).

MOMENT OF TRUTH FOR HAMILTON

Lewis Hamilton faces a moment of truth in Abu Dhabi this weekend. The 2008 world champion has never finished a season behind a McLaren team mate since he entered Formula One in 2007, but that proud boast is set to end in the glare of the Yas Marina floodlights on Sunday. By ALAN BALDWIN (Reuters).

Pressure mounted on Joe Paterno on Tuesday to retire as head football coach at Penn State amid a widening scandal involving allegations an assistant coach sexually abused boys for over a decade and school officials covered it up. By IAN SIMPSON (Reuters).