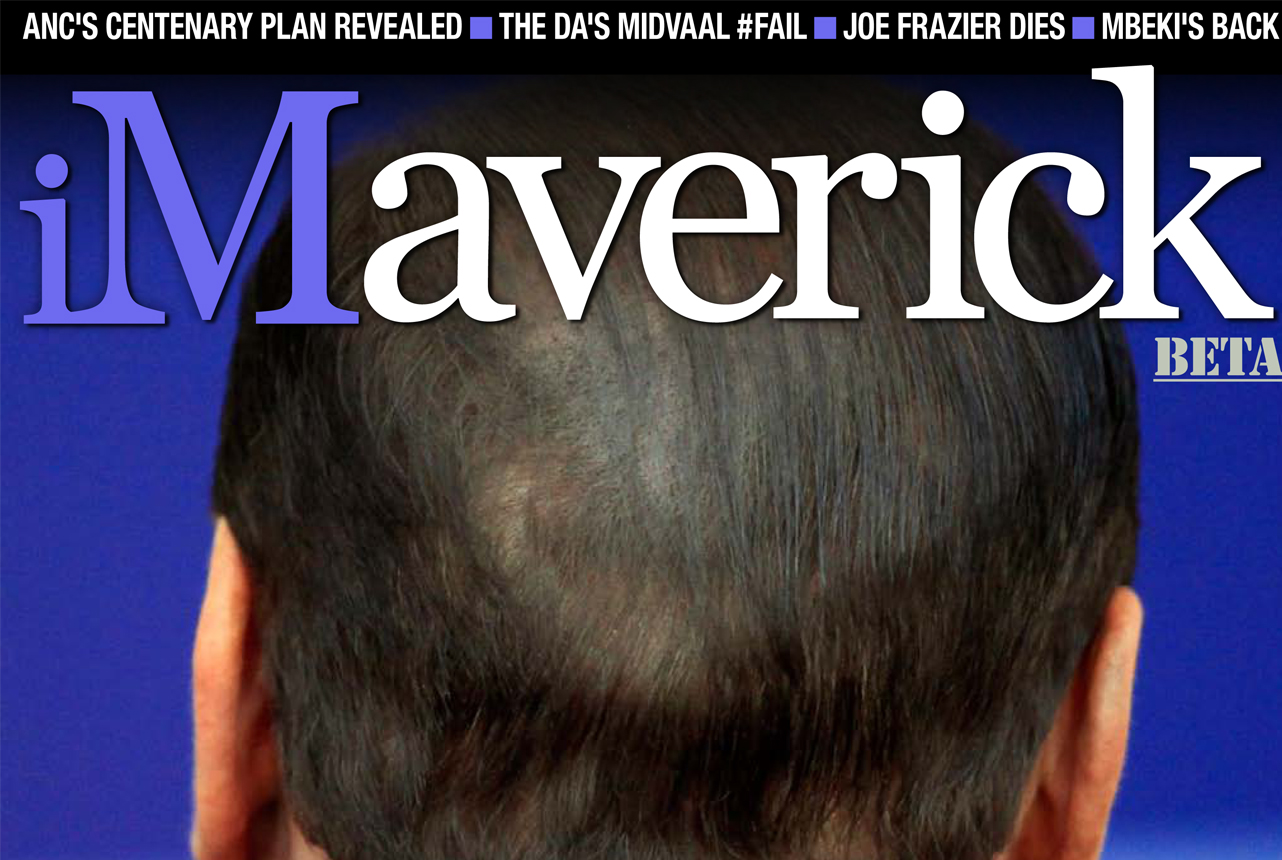 The call for Foschini to withdraw the allegedly sexist T-shirts from sale – as well as reactions to that call – highlight the chilling of debate than can ocucr when debate is replaced by dogmatism.

It was a disappointing turnout on Tuesday in what is one of the most crucial tests of Liberia’s nascent democracy. Voters stayed at home in their droves rather than vote in the run-off election, and between the unseemly political spats and Monday’s unexpected police brutality, it’s hard to blame them. By SIMON ALLISON.

Libya’s awash with weapons, most unaccounted for, and no one can agree on what to do about them. The fighters themselves don’t seem too keen to hand them over – a gun being the best insurance against marginalisation. By SIMON ALLISON.

South Sudan’s journalists may be living in a newly independent country, but it seems independence of the press is not greatly prized by the new administration. Two journalists have been arrested this month – and detained without charge – for writing and publishing a controversial opinion piece. It doesn’t augur well for media freedom in the world’s newest country. By THERESA MALLINSON.

After days of well-fuelled speculation, the International Atomic Energy Agency revealed that it has “credible” information that Iran has engaged in activities aimed at developing nuclear weapons. By KHADIJA PATEL.

What’s the one thing the presidents of France and the USA can agree on? Their mutual dislike of Israel’s Benjamin Netanyahu. But no one was supposed to know. By SIMON ALLISON.

MOSELEY WINS CASE AGAINST NEWS OF THE WORLD

A French court ruled on Tuesday that Rupert Murdoch’s now-defunct British tabloid, News of the World, violated the privacy of the former head of Formula One in publishing photographs of him with five prostitutes in 2008. By Thierry Le?ve?que (Reuters).

On Tuesday executives from Japanese camera firm Olympus finally admitted that they’d stuffed up. Their error? Firstly, realising huge losses on investments; secondly, trying to cover up the fact. Former chief executive and whistle- blower Michael Woodford is well out of it. By THERESA MALLINSON.

Record labels have had a bad run the last couple of years, with the onset of digital music formats and their lack of preparedness for the impact of MP3 players. In fact most of them are still trying to find their feet and a solid business model. Could an industry stalwart like Doug Morris do it for Sony? By CARIEN ELS.

DIANE COETZER AND EBAN OLIVIER SETTLE OUT OF COURT

In what Coetzer terms “the best possible outcome”, Olivier will publish a public apology for the threatening comments he directed towards her on Facebook and pay legal costs, as well as a small settlement amount. By THERESA MALLINSON.

Christchurch will get a temporary 17,000-capacity rugby stadium on the sites of the AMI Stadium, which was damaged during the February earthquake, local media said on Tuesday. By Sudipto Ganguly (Reuters).

WARNIE BACK FOR A SPIN

Shane Warne is bringing his short retirement to an end and returning to cricket in Australia’s Twenty20 Big Bash competition next month, the leg-spinning great said on Tuesday. By Nick Mulvennie (Reuters).

As we get closer to 2012, when the ANC centenary celebrations will take off in huge way, more and more details about what is planned are starting to emerge. On Tuesday, ANC chairwoman Baleka Mbete and spokesman Jackson Mthembu filled in some of the details. It’s going to be a lo-o-ong year for political reporters. By SIPHO HLONGWANE.

A recent Development Bank report on South Africa showed that the country is still on a bad growth trajectory. Continuing along this path will bring little joy and few jobs but President Zuma is confident we can turn it around. By KHADIJA PATEL.

LET THE (OPPOSITION) PARTY BEGIN, OR NOT

Confused or not, reality or fiction, the calls for creating a greater body of opposition to the ANC will only gain in strength over time. Sooner or later, that moment will come. By STEPHEN GROOTES.

It was music to the ears of the ANC. Public Protector Thuli Madonsela has focused her microscope on the Democratic Alliance’s Midvaal Municipality, raising the question of whether it really get things done.

STYLI CHARALAMBOUS: WHAT IF MARK ZUCKERBERG CAME FROM SANDTON?

It’s a question that has raged through the ages. Would genius succeed even if the circumstances and environment in which they prospered were altered? I wonder if Facebook’s creator would still be the youngest billionaire on the planet if he were South African. By GREG NICOLSON.

THABO MBEKI TROUBLED BY A ‘NEW IMPERIALISM’ IN AFRICA

Thabo Mbeki’s not happy with Nato, the West or the UN Security Council. All drew criticism from the former president, who is worried that the Libyan intervention is the first step in an insidious attempt to re-colonise Africa. SIMON ALLISON explains why Mbeki should take off his pan-African spectacles and look deeper into the issues.

THE AGE OF BERLUSCONI TO END AFTER LOSS OF PARLIAMENT SUPPORT

Italian Prime Minister Silvio Berlusconi said on Tuesday he would resign after suffering a humiliating setback in parliament that showed a party revolt had stripped him of a majority. By Barry Moody and James Mackenzie. (Reuters)

CARLOS THE JACKAL RETURNS… TO COURT

Perhaps the most notorious terrorist of the pre-Osama era, a man whose mystique and dress-sense has inspired a cottage industry of films and books, Carlos the Jackal makes his reappearance in a Parisian courtroom this week. The charges, while serious, are almost thirty years old – and the terrorist himself is simply loving the media attention. By KEVIN BLOOM.

When it comes to news and social media, Reuters’ social media editor is the king of the hill. His Tumblr blog is in the top 25 of some 2.3 million tumblogs in the world. He’s also rated as one of the top media tweeters to follow. If you don’t know who he is yet, perhaps you should. By MANDY DE WAAL.

Italian novelist and philosopher Umberto Eco hopes embattled Italian Prime Minister Silvio Berlusconi will be gone from office within a week in a welcome end to a long nightmare. By Edward McAllister (Reuters).

YES, WE NEED ANOTHER HERO: DC COMICS REBOOTS TO THE FUTURE

Comics have long moved on from their four-colour Golden Age, but are they still relevant to a new generation of readers? PAUL BERKOWITZ (secret identity unknown) dons his fanboy hat and takes a look at the state of the industry.

Joe Frazier, the sweet science’s epic rival to Muhammad Ali, passed away at 67 from liver cancer. Frazier beat Ali in that legendary fight in Madison Square Garden in 1971. It took him years to come to terms with Ali’s taunts, both in the ring and outside it, but before he died, Frazier told the world he had forgiven Ali. Way to go, Smokin’ Joe. By J BROOKS SPECTOR.

Argentina’s Pumas will end the long wait for a place in a major annual competition when they make their debut away to South Africa in the opening fixture of the new Rugby Championship next August. By Rex Gowar (Reuters).

There are a number of oddities when it comes to the series opener, underway at Newlands on Wednesday. It’s hard not to ignore that South Africa haven’t played a Test in 305 days or that they last played a November Test at Newlands in 1921. By Julia Harris (Cricket365.com).