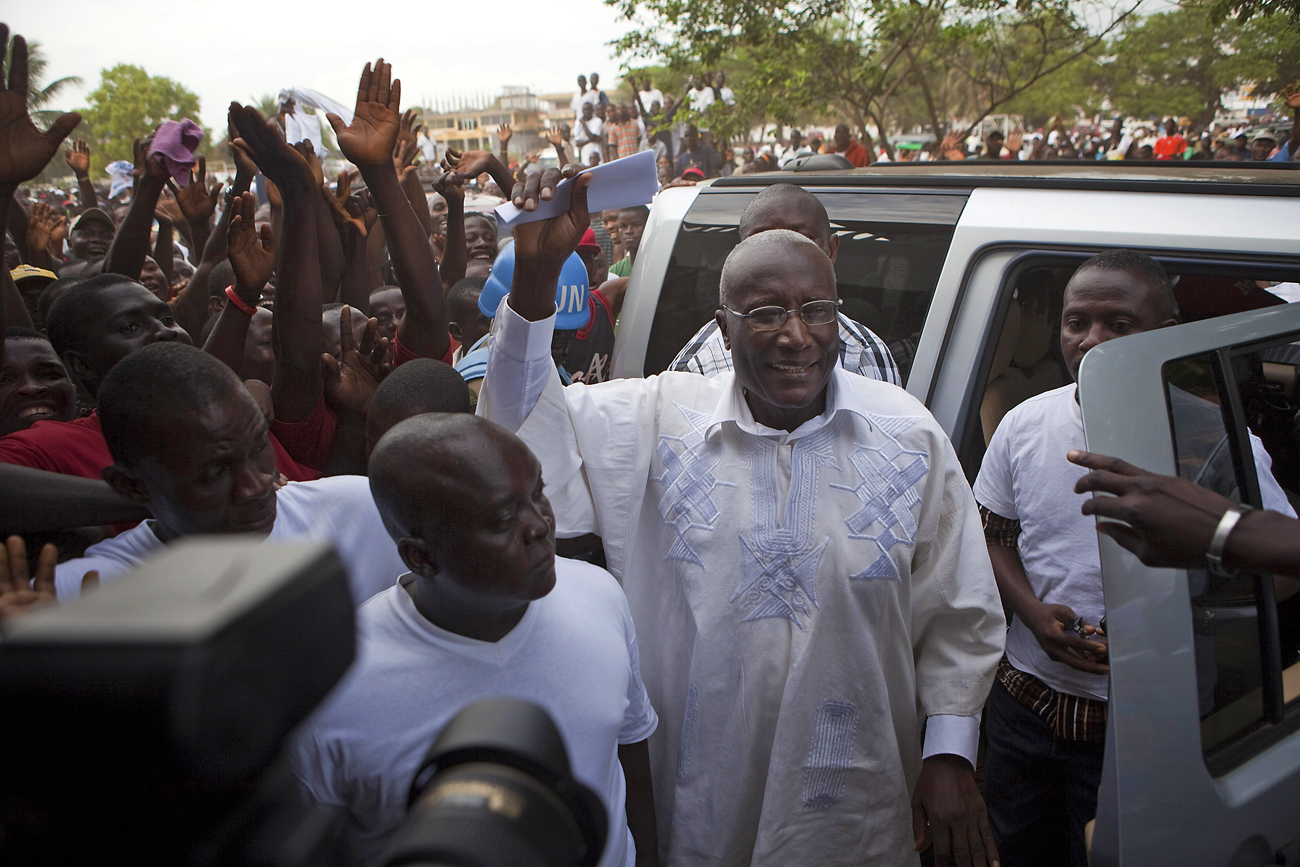 It’s crunch time for Liberia’s nascent democracy. Main opposition candidate Winston Tubman pulled out of the run-off elections, citing all sorts of problems, although the real problem is his lack of support. Can Liberia make it through this political crisis? By SIMON ALLISON.

The Liberian elections are in disarray after the main opposition candidate withdrew from the run-off election scheduled for Tuesday and called for a general boycott of the polls. Winston Tubman, who received the second-highest percentage of votes in the first round of polling, has been vocal about his unhappiness with how the elections have been run, claiming a biased electoral commission and electoral fraud prevented a fair election in the first round. This, he argues, will make the run-off election a foregone conclusion – one not favouring him or his Congress for Democratic Change, which he heads with former world footballer of the year George Weah as his running mate.

“We officially inform the Liberian people and the world that the CDC will not take part in the vote on Tuesday…The election machinery is still flawed, as it was in the first round,” Tubman told a press conference on Friday in Monrovia. “Any government coming out of the 8 November process will be done without a national mandate to govern and will not be recognised by the CDC,” he added.

Tubman’s dissatisfaction with the voting process has not been mirrored in international observer reports, which have described the elections as transparent and fair, without any major breaches in voting and no incidents of violence. And his unhappiness continues despite the concessions already made by the Liberian government (led by Tubman’s only rival for the presidency, incumbent Ellen Johnson Sirleaf), which included replacing the head of the independent electoral body.

But this wasn’t enough for Tubman, who submitted a fresh list of demands some of which are ludicrous. For example, he wants the elderly to be assisted in casting votes. No problems there, except that he wants the help to come from party representatives, who can’t exactly be relied upon to respect and execute the wishes of some old granny. And he also wants the community of international observers to take a more hands-on role in the elections, getting involved in decision-making and the actual running of the elections.

There are two problems with this. Firstly, it completely violates Liberia’s sovereignty to have foreigners making important electoral decisions, especially when these foreigners have been trained as observers rather than electoral officials. Secondly, it shows that Tubman is willing to put a lot of trust in international observers. If they are so trustworthy, why has he decided not to trust their assessment of the first round of polls as free and fair?

Tubman’s intransigence is frustrating incumbent Johnson Sirleaf. “Do not succumb to fear and intimidation. Do not allow any politician to hold our country hostage,” she said in a public radio broadcast. “Do not allow Tubman to falsely claim boycott when what he is doing is forfeiting the rights of the finals because he fears defeat,” she added.

She might be onto something there. After the first round of elections, Johnson Sirleaf had polled 43.9% of the vote, while Tubman received 32.7%. The remaining 23% went to various other opposition candidates, most notably former warlord Prince Johnson who assumed something of a kingmaker role with his 11.2%. So for the run-off election – which was between only Johnson Sirleaf and Tubman – each candidate had to fight over the endorsements of the other parties. Tubman lost this battle comprehensively, as each opposition party endorsed Johnson Sirleaf, including the hugely influential Prince Johnson. Prince Johnson apparently made his endorsement without consulting his party, and one report from a usually reliable source is claiming that he’s been expelled because of it.

But regardless, this positioned Johnson Sirleaf and her Unity Party as overwhelming favourites to win the run-off election, consigning Tubman and his party to another six years in the opposition wilderness. To keep his hopes alive, his only option was to attack the legitimacy of the elections themselves. By withdrawing his candidacy and calling for a boycott, he is effectively preventing Johnson Sirleaf from receiving a democratic mandate, leaving her leadership always open to question. In doing so, Tubman is also threatening Liberia’s swift, but fragile democratic progress, of which these elections were always going to be a major test.

But the hope is that Tubman has misread the mood of the Liberian people, who might just be tired of petty political disputes which invariably have not-so-petty consequences for them, especially in the context of the bloody power struggles which have characterised much of Liberia’s recent history. If enough people ignore Tubman’s call for a boycott and refuse to attend the candle-lit vigil he wants to hold instead, Johnson Sirleaf will receive a democratic mandate, nonetheless, and Liberia can continue its encouraging development. DM