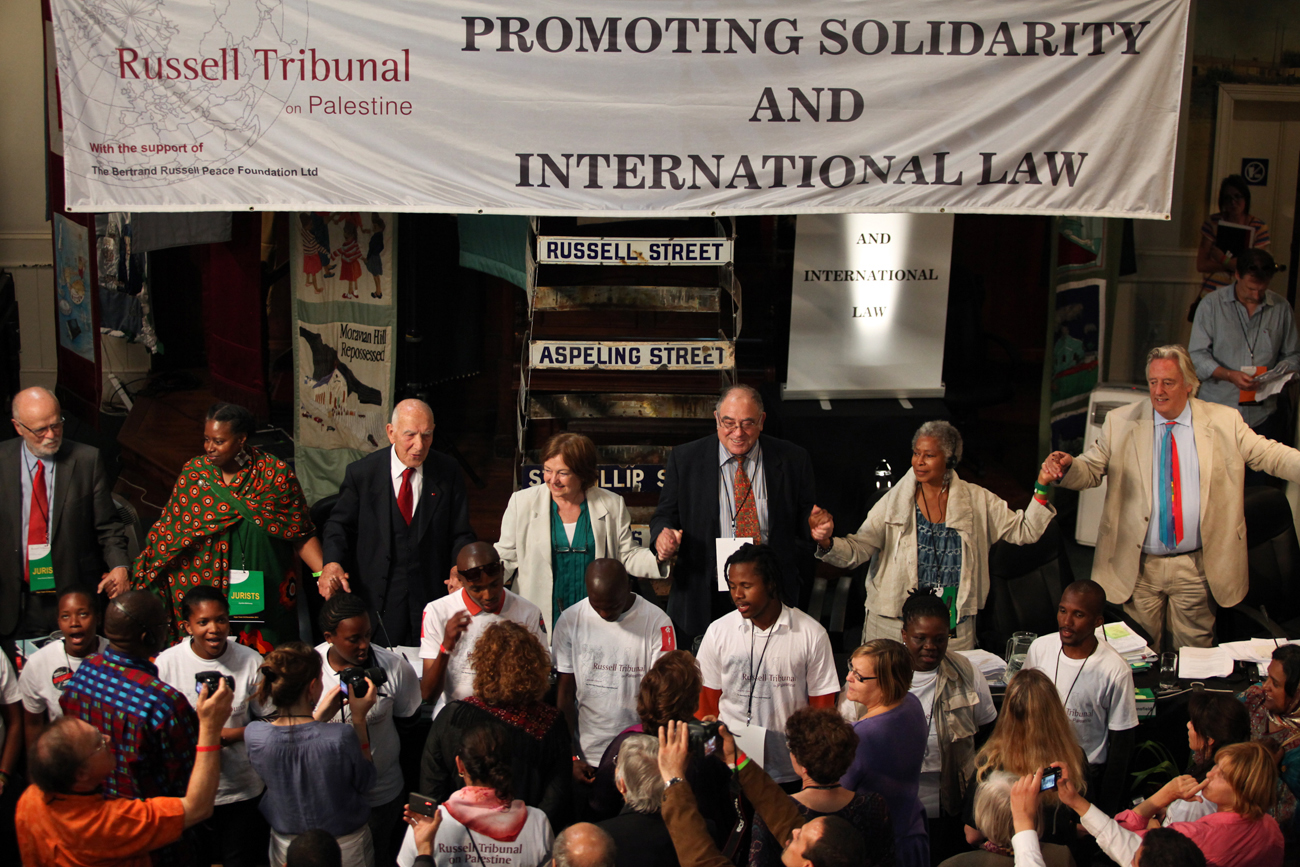 The third session of the Russell Tribunal on Palestine, which sought to answer whether Israel’s practices against the Palestinian people in breach of the prohibition on apartheid under International Law, convened in Cape Town over the weekend. Perhaps not surprisingly, critics, among them the South African Jewish Board of Deputies and South African Zionist Federation, have described the tribunal as a “kangaroo court” and a “pointless smear campaign pushing a narrow agenda against Israel, and using high-profile participants to attract media attention”. By OSIAME MOLEFE.

The venue, the historic District Six Museum, with its walls lined with a history of apartheid-era forced removals and brutal segregation and oppression of one group by another, set an intentionally emotive backdrop to the proceedings of the Cape Town session of the Russell Tribunal on Palestine. It is a Bertrand Russell Peace Foundation-sponsored event that describes itself as “a public awareness tribunal to investigate violations of international law perpetrated against the Palestinian people”.

The tribunal, despite lacking official judicial status, draws on the 1973 International Convention on the Suppression and Punishment of the Crime of Apartheid – to which Israel is a signatory – and the 2002 Rome Statute, which defines the crime of apartheid as “committed in the context of an institutionalised regime of systematic oppression and domination by one racial group over any other racial group or groups and committed with the intention of maintaining that regime”.

Delivering the opening remarks, Archbishop Emeritus Desmond Tutu said, “For me, it has been such an uncanny and agonising thing to see a replay of what used to happen here – and that is not a political statement. (When you go to the Holy Land and) someone says to you, ‘You see that house? That used to be my home. It’s been taken over now by Jews.’ You don’t have to be over-smart to say that you heard exactly the same thing being said here in District Six.”

But the comparison of Israel’s treatment of Palestinians to the decades-long systematic brutality perpetrated by the National Party government in the name of South African whites has neither been uncanny and nor obvious for some – most notably from former South African Constitutional Court judge Richard Goldstone.

In a New York Times op-ed last week, Goldstone echoed the SA Jewish Board of Deputies position that the tribunal isn’t a tribunal at all as it starts with a conclusion (that Israel is guilty of apartheid), then twists facts to make a case for that conclusion. He also argued that it is unfair and inaccurate slander against Israel to evoke the situation in pre-1994 South Africa to describe Israel’s actions toward Palestine.

Goldstone distinguished between Israel – where Israeli Arabs, who make up about 20% of the population, are afforded the same rights as Israeli Jews – and the areas of the West Bank occupied by Israel.

“The situation in the West Bank is more complex. But here too there is no intent to maintain “an institutionalised regime of systematic oppression and domination by one racial group.” This is a critical distinction, even if Israel acts oppressively toward Palestinians there,” Goldstone said.

The government’s actions in the West Bank – roadblocks, military incursions, the controversial Israeli-West Bank barrier and similar measures – are seen by Israel as necessary for self-defence in what has been decades of tit-for-tat attacks, according to Goldstone.

Earlier this year, Goldstone drew praise and criticism when he questioned the findings of the UN Human Rights Commission fact-finding mission, which he chaired, into Israel’s three-week bombing and invasion of the Gaza Strip in 2008. The self-titled Goldstone Report found that Israel may have perpetrated war crimes and crimes against humanity, however, Goldstone said the finding would have been different had he known then what he knew now. Goldstone however stood alone as his three co-writers, Pakistani human rights lawyer Hina Jilani, Christine Chinkin, a professor of international law at the London School of Economics, and former Irish peacekeeper Desmond Travers, stood by the Goldstone Report’s findings and rejected calls for the UN to recant it.

John Dugard, former UN special rapporteur on Palestine, responding to Goldstone’s latest recantation, argued that despite the obvious differences, in practice, there is little difference between the Israeli and the apartheid-era regime. Dugard wrote, “(Israel’s) restrictions on freedom of movement, manifested in countless humiliating checkpoints, resemble the “pass laws” of apartheid. Its destruction of Palestinian homes resembles the destruction of homes belonging to blacks under apartheid’s Group Areas Act. The confiscation of Palestinian farms under the pretext of building a security wall brings back similar memories.”

Dugard and his successor as UN special rapporteur on Palestine, Richard Falk, who also responded to Goldstone, were among what was described as experts and witnesses who presented at the tribunal. Presentations were also heard from Cosatu general secretary Zwelinzima Vavi, Haneen Zoabi, a Palestinian member of the Israeli legislature and Max du Plessis, a University of KwaZulu-Natal law professor and part of the team that drafted the 2009 Human Sciences Research Council report on Israel’s practices in the occupied territories.

That report found that “the State of Israel exercises control in the (Occupied Palestinian Territories) with the purpose of maintaining a system of domination by Jews over Palestinians and that this system constitutes a breach of the prohibition of apartheid.”

During his testimony on Saturday, Du Plessis said that while apartheid practices in South Africa might prove useful to the tribunal as an indication of what the international community sought to prohibit in adopting the 1973 convention, the practices are not the benchmark for a finding of apartheid elsewhere. The principal instrument that provides this benchmark lies in article II of convention itself.

After attempting to establish a legal framework, the testimony that followed over the two days examined different aspects of article II with regard to the Israeli-Palestine situation, including whether Palestinians are a separate racial group and the specific actions that may constitute the establishment and maintenance of Jewish domination over Palestinians. The response to the former, submitted by Ingrid Jaradat on behalf of the Palestinian Boycott Divestments Sanctions national committee, was a de-facto yes. While Palestinians don’t usually define themselves as a racial group, they are viewed and discriminated against as though they were a group, according to Jaradat.

The Israeli government was invited to make a presentation at the tribunal but according to Dugard, they did not respond to the invitation.

The jurors – among them anti-apartheid stalwart Ronnie Kasrils, Nobel laureate Mairead Maguire and former TRC commissioner Yasmin Sooka – will set out the tribunal’s conclusions on Monday. The likely conclusion will be the affirmative, that Israel has breached the prohibition of apartheid under international law.

Whether that conclusion will bring anything, most importantly peace, is unclear given the criticisms the tribunal has faced. DM